Leadership of T and Blackie in The Destructors

The story, ‘The Destructors’, by Graham Greene is an interesting one that revolves around a destructive teenage gang-the Wormsley Common Gang-and their journey. Greene uses many techniques like themes, settings, characters, literary devices and paradoxes to make this extract powerful and striking.

‘The Destructors’ is set in the 1960s.after the world war 2 when a new generation grows up in the remains of the past. The setting plays an important role as it elucidates the gang’s motives any goals. They meet everyday in the car park area.

This shows how their surroundings influence them. A large part of their neighborhood is destroyed. They compare a house that didn’t fall or get destroyed in the bombings to a jagged tooth. These pitiful remains represent inequality and injustice blatantly.

The prevailing themes that complement behavior of the gang in the Destructors are post-war mentalities, injustice, loss of innocence and destruction as a form of creation. As the Destructors is set post-war, Graham Greene brings out the mentality of the people.

The gang doesn’t trust anyone to have genuinely kind nature. They feel the inequality of the world in many ways and lose faith in humanity.

The main motive of the gang is to make their own world order; to create equality and justice in destructive and cruel ways. The loss of innocence is evident – Mike the solemnity of a meeting with the saying ‘I’ve got to go to church’. This reminds the readers of their tender age that is being ruined.

Their childhood is spent in horrible and disastrous plans and schemes. The last theme, one of destruction, being a form a creation show that the group take refuge in annihilation as an art form. They are proud of they’re of their destruction due to their absurd war mentalities.

Characterization in the “The Destructor” plays a crucial role in portraying the violent nature of the gang. Trevor or T is a cold, emotionless boy who inspires the gang to destroy. He has a heartless personality. He believes that “destruction is after all a form of creation” and he has truly lost faith in human emotion and feeling. “All this love and hate” he said, “it’s soft, it’s hooey”. T resorts to destruction to bring about justice; his family lost their status and came down in the world.

Blackie, however, is portrayed as innocent and naive. Blackie expects T to share the money he found as a reward. T’s idea of a reward is burning the money. When T is enthusiastic about demolition of Old Misery’s house, Blackie assumes it’s because he hates him. T however, is quite indifferent to Old Misery. The character of Blackie illustrates what a child should be like; he provides comparison to the cold and apathetic character that is T.

The tone of the story is sad and gloomy, and it reflects the loss of kindness and empathy that follows the loss of life in a war. It shows that the next generation’s new found faith in destroying and adds to the hopeless and bleak setting. The tone is also very solemn and depressing.

The literary devices used are extremely potent and ‘The grey ash floated above them and fell on their heads like age’. This simile shows their loss of innocence and furthermore, shows that they have brought it on themselves. ’T. raised his eyes, as grey and disturbed as the drab August day’. This shows the trauma and anguish that is causing T. to be as destructive as he is while also hinting that T. has only become like this because of his surroundings.

Epistrophe is also used in the quote ‘he looked around the room crowded with the unfamiliar shadows of half things, broker things, former things’. The repetition of the word things emphasizes T’s declaration of the lack of human emotion- ‘there’s only things’ he says. It shows the kind of post war mind set they have and the things they believe in- They’ve lost faith in humanity after terrible events like the war and now only trust only the real, tangible remains that are things.

The gang has many idiosyncrasies common to adult groups and armies. They use military terminology and organize themselves in an orderly fashion. They use terms like ‘recruit’ and they have rules which they must follow. They have a clear reign of leadership carried out by voting. These traits indicate to the reader that they are an allegory of real world; of the real wars and real political struggles for power.

In the Destructors, the endeavor for leadership between T and Blackie is interesting. T. initially stands out as a strong candidate du to his ‘brooding silence’ and grand plans for annihilation but Blackie eventually wins back his power. He helps T out selflessly even when his supposedly brilliant plans are failing and gains the favor of the gang again. This hints the good in the work that will occasionally prevail despite the sea of sins. The dynamics of leadership and power in the gang are truly insightful and it’s metaphor for actual power plays.

It is these tactics that make the story a powerful and meaningful one. It shows the effects of war, human nature and insights about real leadership and destruction.

Leadership of T and Blackie in The Destructors. (2017, Nov 02). Retrieved from https://studymoose.com/the-destructors-by-graham-greene-essay 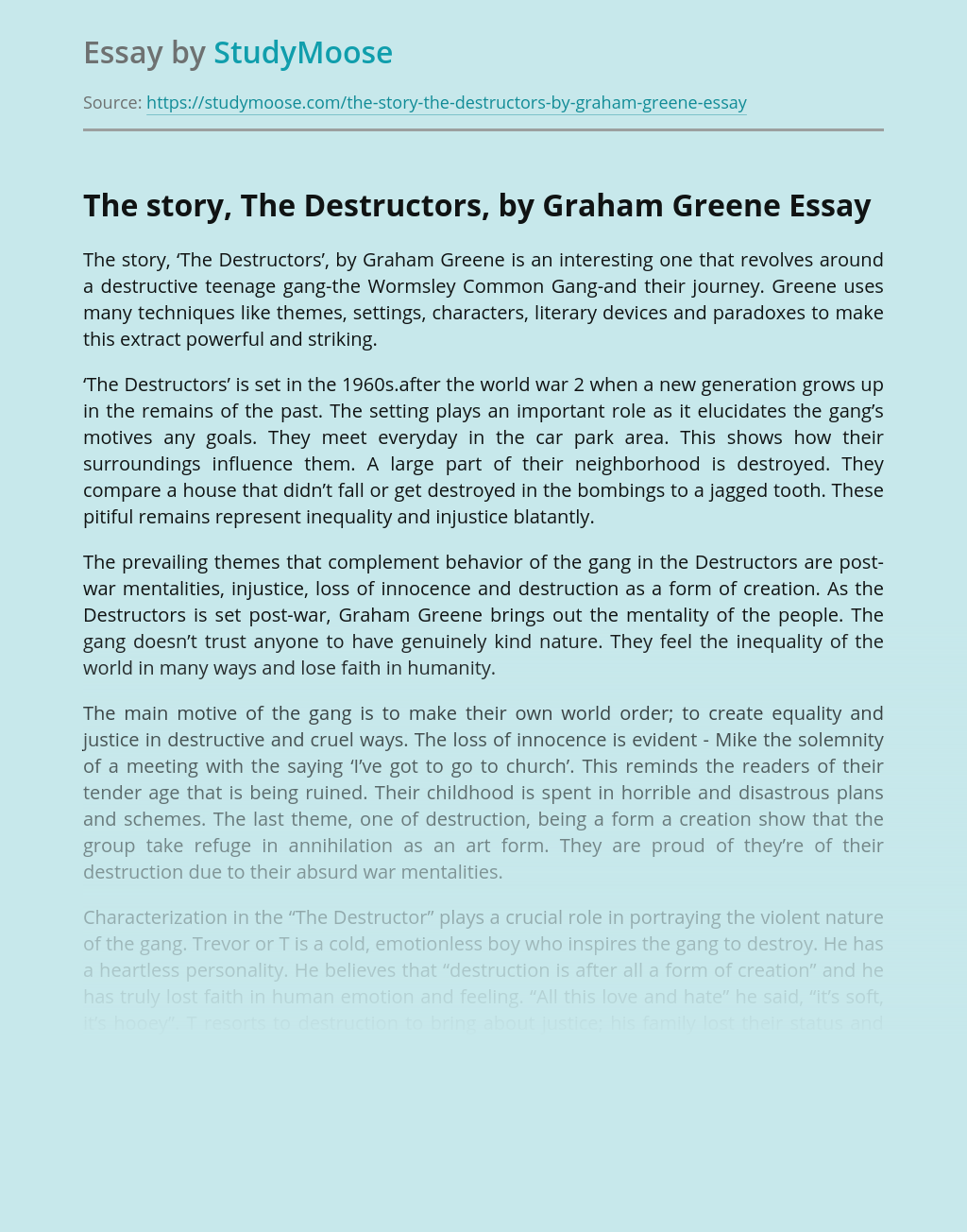 The visual and the realistic arts in Spielberg’s best ever The critics all over the world with their holistic approach endeavor to find the pros and cons of a 3 hour classic masterpiece directed and created by the gods of the theatrical arts. The modern world tends to be sufficed by the major events and...

The Treatment of Shell Shock Victims

Thesis Statement Shell shock is an epidemic that affects men during wartime and the treatment of shell shock victims varies widely; ranging from the use of disciplinary approach or practices up to the use of technological advancements such as the electro-shock treatment. Shell Shock refers to the psychological trauma caused by war to men. This...

Get Essay
The Loudest Voice By Grace Paley

The story opens with clear elements of social setting relating to the narrator’s life in a Jewish community. The names of the people in the story are, for the avoidance of doubt, very Jewish (“Mr. Abramowitz” line 5, “Ah, Mr. Bialik” line 6). Opening the story with characteristic Jewish names helps us formulate an identity...

The Reasons For Stalemate On The Western Front

WW1 started as a war of quick lightning thrusts and high mobility, but degenerated into an astonishingly protracted war of static battle lines. The Western Front was the name given to the line of trenches stretching from the Belgium coast to Verdun. Following the Battle of Marne and Aisne of 1914, both sides dug in...

Dunkirk Was a Miracle of Deliverance

From the 27th of May to the 4th of June, there were the nine days of evacuation of British, French, Belgian and Dutch soldiers alike. They were trapped in the small town of Dunkirk due to the port that was there. After waiting for days, the majority were eventually rescued by a combination of naval...

Invasion of Poland and The World War 2

The Invasion of Poland, also known as the September Campaign or 1939 Defensive War (Polish: Kampania wrzesniowa or Wojna obronna 1939 roku) in Poland and the Poland Campaign (German: Polenfeldzug) in Germany, was an invasion of Poland by Germany, the Soviet Union, and a small Slovak contingent that marked the beginning of World War II...

Instructions for All My Sons Project

General Instructions Keep all notes, papers, drafts, etc. together in a folder. Attach them to the end of the project. 1. Answer all the questions provided in the instructions in the body of the project. 2. Find and print at least 4 articles in English that deal with the play All My Sons. 3. Your...