Human Nature in the Destructors

Graham Greene had summarized the conflicts in a society through a representation of teenage children during the post-war era, in his famous short story, “The Destructors”. The setting of the story happened in blitzkrieg London after World War II ended. The characters are mainly teenage boys who had established a gang known as Wormsley Common gang. Their group religiously meets everyday beside the house of Mr. Thomas or Old Misery. The decision of the gang was made through voting. T or Trevor, the main character in the story, suggested that the gang should demolish Mr.

Don't use plagiarized sources. Get your custom essay on
“ Human Nature in the Destructors ”
Get custom paper
NEW! smart matching with writer

Thomas’ house on the upcoming holiday. Mr. Thomas was an old man, who lived in a house that solely stand on an area that was bombed during the war. The group agreed and commenced their plan under the leadership of T. the story ended with the destruction of the house. The story reflects action and adventure, since the gang would do things that can be considered as daring, especially for their age.

The story also has a mix of suspense, especially on the last part wherein Mr. Thomas had gone back home earlier than expected.

Nevertheless, the short story is not merely a fiction made to entertain its readers rather, it reflects the factual realities observable during the period it pertains such as delinquency, war and human nature. This essay would analyze the story in connection to the delinquency and war which reveals human nature. Human nature would be discussed as something that is subjective and relative to the perspective and position of the individual in the society where he belongs.

The story revolves around the actions of the Wormsley Common gang.

As mentioned above, the group was predominantly young teenage boys. Every day they will engage themselves with folly, childish acts. As children going through the transition to adulthood, they are trying to find their own identity through joining groups. They express their authority or control over their decision through delinquent acts; such as sneaking free bus rides. One of the things that separate man from the rest of the living organisms in the planet was his capacity to control things. It is a part of being a human to seek dominance.

The several instances of delinquency in the short story prove this point. The most prominent was the destruction of Mr. Thomas’ house. However, if all humans would try to dominate each other, chaos would result. Therefore laws are created in societies that seek to control human actions. In the story, Mike –the most childish character, was usually noisy or has a childlike attitude of opening his mouth when he heard something interesting or unbelievable. This behavior was controlled in the gang through the unwritten rule that a frog would be put down inside the mouth of noisy or open-mouthed members.

The story also shows that humans have the capacity to choose or decide. Blackie could leave the group but he did not. He can express his disagreement but he chose to remain silent. Humans are naturally born with the ability to weigh circumstances with respect to situations. Man can choose whether to be good or evil. Most of Greene’s writings reflect the good and the evil side of man. The ethical weight of the action depends on the perspective used to judge the action. Breaking into someone else’s house is impolite and evil as rendered by the society, or at least by the society of London.

However, in the perspective of the group, it is an expression of pride, dignity and courage. Mr. Thomas served as the representation of the adults during the period; he does not care what the children would do as long as their actions would not bother him. When he gave the boys some chocolates, the gang discussed and argued about why Mr. Thomas would give them something. The gang decided that it was a bribe. Mr. Thomas had accommodated T when he visited him. He even let him tour the house and explained the things he can’t understand. Nonetheless, it was T who had suggested the plan to destroy the house.

Mr. Thomas had trusted T, at the end T locked him up. This illustrates the younger generation’s distrust to the adults. Why? Because it was the adults’ decisions, neglect and actions that led to their destitution. When they took everything away from Mr. Thomas, they left him as vulnerable and helpless as a child. They gave him some foods and a blanket to keep him comfortable as he waited for someone to open the door. When the door finally opened, he was amazed to find that the house he cherished was now only a pile of bricks and rubbles.

The concepts of delinquency and war revealed that human nature is also subjective to individuals and relative to societies. As illustrated above, humans tend to judge an action from their own perspective. The living conditions and previous events shaped these perspectives. The distant atmosphere that surrounds T was caused by the events that led to their poverty. The childish acts of Mike were due to his young age. The just attitude displayed by Blackie when he opposed taking away things from Mr. Thomas’ house reflects that he was against theft. The humans’ ability to reason gave him the ability to judge.

The fact that Blackie stole or got the hacksaw without permission showed a changed in perspective regarding right and wrong. The things that the society or the organization accepts were the right things while those that the society blames were wrong. Human nature was normally branded as either good or bad, depending on the human actions which were either right or wrong. Human nature, as can be reflected on the story was neither good nor evil. Someone perceived as evil by one person might be considered as good by another. People can be persuaded that humans are naturally good.

If the society was not perverted, humans would not result to perverted actions. Humans can also be seen as naturally evil and the existence of laws can be justified as a means to prevent them from explicitly doing evil and promote harmony and security in the society. Like every human being, the characters in the story longs for a recognition. Humans would naturally form groups to be able to defend themselves and justify their actions through rules and laws. The gang would decide according to votes which gave everyone a chance to express himself. The conclusion of the votes determines the gang’s action.

Whether it was mischief or simply a childish act, if the majority of gang agreed that it should be done, then it would be done. Everyone would do their best to achieve the set-goal. The story also highlights the fact that it is a human nature not to try the things that pains causes pain. For example, Mr. Thomas went home earlier than expected because of his rheumatism. Likewise, when Summers (one of the gang members) complained that they already done “enough”, T told him that he should not complain because he along with the others had voted in favor of the plan.

Each member of the gang needs one another to get a sense of belongingness and create an identity. When Blackie asked T whether he hated Mr. Thomas, he perceived that T’s actions and decisions were out of personal interest. Mr. Thomas gave them chocolate to get rid of it. The driver looked help Mr. Thomas out of curiosity. Mike went to the house instead of the church, not simply to help but to be accepted and regarded as important. Blackie did not leave the gang because he wanted to take part on its success and glory.

Common to all humans was their capacity to decide, contemplate and judge depending on their personal interest. Humans see things depending on how they perceived them. Every individual portrayed in the story would act according to their selfish interest. Humans were judge according to convention and thus, they act with respect to those conventions. The destruction of the house represents the power to destroy. Since the beginning of time, humans aspire for power and authority. Both of these gave humans the capacity to control things with respect to how he wanted things to be.

The idea of destroying the house made T a leader. The actual destruction confirmed his authority. On the other hand, the destruction of the house undermines the power of Mr. Thomas. The greater society also works the same way. It was a power struggle to stay on the top. The destructors were the winners while the destructed was the loser. Good and evil depends on the position and situation of the person in between this spectrum. Good makes the person happy while evil gives him pain. Good benefits while evil takes away or weaken a person.

Human Nature in the Destructors. (2016, Sep 23). Retrieved from https://studymoose.com/human-nature-in-the-destructors-essay 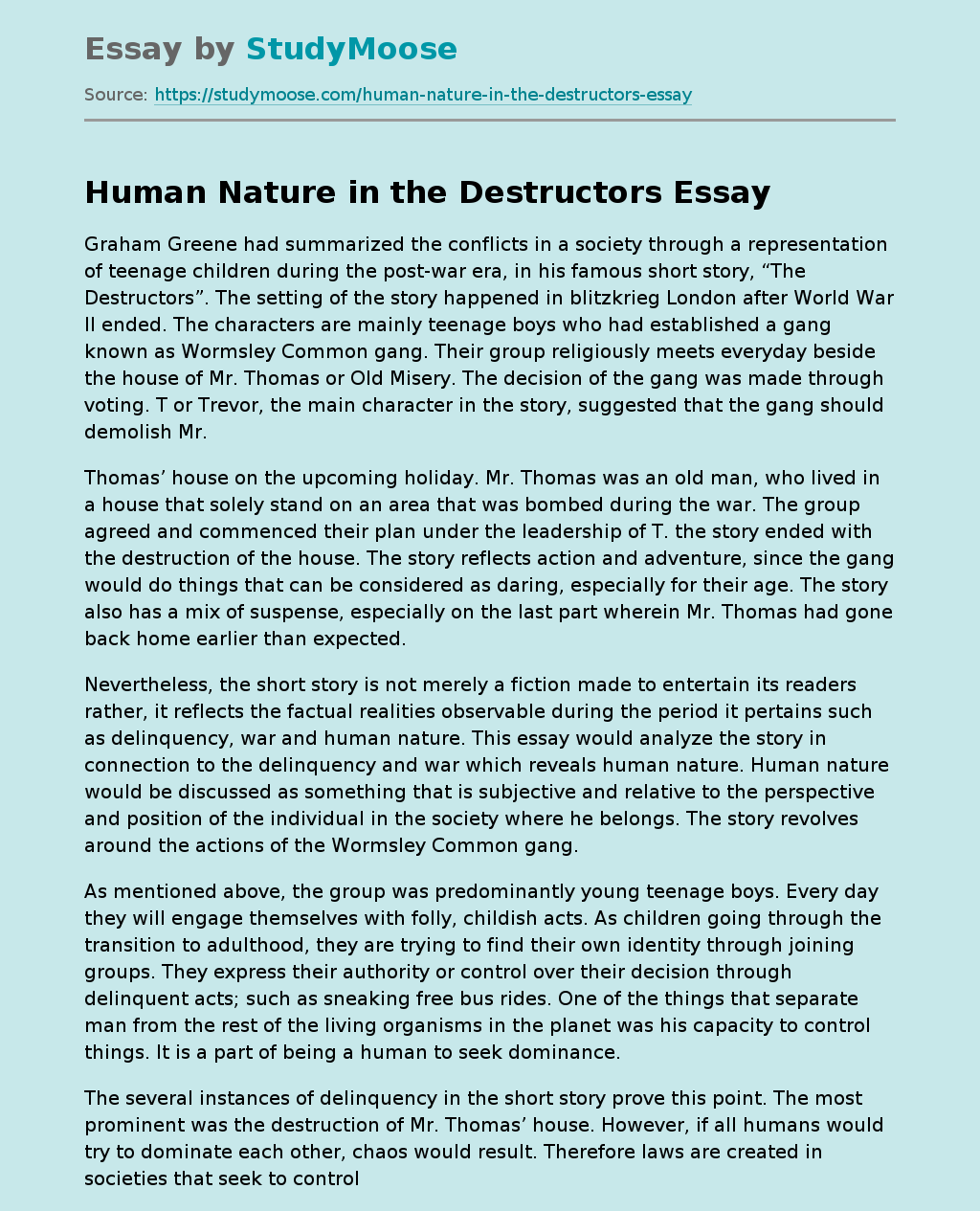