The Wormsley Common car-park gang were a group of adolescent delinquents who committed petty crimes to amuse themselves and were as customary as any other gang around London post the Second World War, that is, until they were joined by a new member. “It was the eve of the August Bank Holiday that the latest recruit became the leader of the Wormsley Common Gang”. This statement, as the opening line, introduces us to an atmosphere of conflict as Blackie, was the eldest of the gang and understood leader.

Turn in your highest-quality paper
Get a qualified writer to help you with
“ The Wormsley Common Car-Park Gang ”
Get high-quality paper
NEW! AI matching with writer

So the prelude of another dominant character naturally conveys conflict. This is precisely the threat that T. imposed as soon as he appeared, and due to his presentation of his idea of destruction, his contrast to the other members of the gang became clearly visible and therefore became a challenger to Blackie’s “throne”.

T’s arrival to the gang was extremely distinctive compared to those previous to him joining the gang. He was instantly accepted and welcomed by the boys whereas usually a new recruit would have to of endured “a ceremony of initiation” in which they would have to prove their loyalty to the gang.

This action of acceptance towards T. undoubtedly shows the gang’s strange yet fear ruled respect for him. The gang respected T’s silence, as he never wasted a word, he was cool, collected and confident. His confidence was new and immediately recognised by the boys of the gang.

The reason that the gang respected T.

was not only because he was a lot older than the rest of them, but also his self-assurance, startling confidence and never feeling the need to speak unless spoken to, was realised instantly and forthwith he was respected.

Compared with the rest of the gang, T. should have been a victim of mockery as he had many qualities that were deviant when related to his surroundings. To begin with, his name was Trevor; this name was uncommon in poverty stricken areas of London, and would have easily given away his middle class upbringing and origin, so in normal circumstances, he would have therefore been a target of ridicule.

Then, there was the fact that his father, who had once been an established and honourable architect, was now a clerk and “had come down in the world”, which would have been an incentive of bullying. Moreover, there was then his mother, who was obviously having problems dealing with the fact that her family were no longer recognised as aristocratic and were now living in the slums of London. We know this due to the author’s notation of “his mother considered herself better than the neighbours”, which leads us to believe that she may have made a show of herself in front of the neighbours whilst coming to terms with a change of environment.

An apparent display of respect for T. by the gang, among many others, was the act of shortening his name from Trevor to T. The purpose of this action was that the gang felt the need to do so because then they would have no excuse to laugh at him. The name Trevor revealed his admirable foundation. This procedure shows the unfaultered confidence of T. as not only was it not his idea to shorten his name, he didn’t seem to be at all bothered, remaining completely self-assured as always, not even slightly embarrassed when telling the gang his name for the first time.

When compared with the rest of the group T. was blatantly different, standing out amongst his so-called friends. He held many qualities that distinguished him from his surroundings, such as his apparent maturity, his education and speech, and conclusively his up bringing and manners.

T’s education and intellectual interests shone through literally whenever he spoke. The language he used was much more distinguished than that of the other boys in the gang and his knowledge of literature and architecture was clearly fluent as he conveyed interest in his environments.

This quotation overtly shows T’s roots. Within it, he has conveyed many points of intelligent interest as he took notice of what his father notified him, became interested in it and remembered it. His wisdom of who Wren was and of his work was undoubtedly to do with the fact that his father was once an architect himself, but the certainty that T. had even brought it up in conversation shows his astonishing knowledge at his young age. Blackie’s dismissal of T’s remark exhibits the lack of his education or schooling as not only did he discard the remark without even thinking, he did not question T. of his knowledge or even show any interest. This action only even more shows the apparent difference between T. and his fellow gang members in the department of intelligence.

T’s language is undoubtedly much more refined than that of the remainder of the gang, as not only did he not squander words on mindless chatter “there were possibilities about his brooding silence that all recognised. He never wasted a single word even to tell his name”, he seemed and remained confident enough to hold his own, without feeling the need to make small talk to fit in.

‘What do you mean, a beautiful house?’ Blackie asked with scorn.

This quotation yet again proves the difference between T. and his friends. In the quote he uses the word “beautiful”, which was extremely unusual for an adolescent boy living in East London to be using. Unintentionally, T. accidentally keeps revealing segments of his past, by using the structured and composed language that he does and demonstrating his knowledge on adult matters.

When T. narrates his encounter of being inside of Old Misery’s house, describing every inch of it with careful detail, the gang automatically assumes that he had broken in.

” Blackie asked hopefully, ‘Did you break in?’

This quote shows that this was not that case as T. reports that he actually rang the doorbell, and asked for permission to look around the house that was famous in the area. This shows the reasoning in T. when compared with the boys as they had immediately presumed that he had broken in when instead he had asked to look around so that he could plan the careful destruction of the house.

Again, this quote exhibits that when T. was discussing his thoughts and idea of obliterating the house, the gang supposed that he had only gone in to pinch something. This presumption shows that pinching things was an everyday occurrence for the boys and something they had grown up with, therefore letting them believe that stealing was acceptable.

Another example of the difference between T. and the gang is when he tells them of his idea to destroy Old Misery’s house. After recounting his experience inside the house, and presenting them with the idea of how they could demolish it, “We would be like worms, don’t you see, in an apple”, Mike and some of the other boys in the gang remind him that they’re supposed to be catching free bus rides.

‘Free rides,’ T. said, smiling to himself, ‘you can stand down Blackie, if you’d rather…'”

The quotation displays again many differences between T. and the boys as after presenting them with the idea of organisation, careful planning and destruction, they claim that they would rather commence on “pinching free rides”. This activity is embarked upon not because they need to get somewhere and don’t have the money for the bus-fair, but that they find it amusing to jump off of the bus before the conductor catches them. This operation taken up by the boys only even more shows the difference between their maturity and T’s.

On the second day of the destruction, after everyone left, Blackie and T. embarked upon the activity of burning a fortune of money belonging to Old Misery. I think that T. burnt it not out of spite to Old Misery but because he felt that because his family was poor, he didn’t want anyone else to have money or be above them and also that as he was destroying the house, he wanted to destroy everything.

My belief of why T. destroyed the house is that he did it in a manner of speaking as an act of revenge. We are told that T. had recently had a change of environments as he was used to upper class atmosphere and habitation, but was then so abruptly extracted from his noble existence and then deposited in the poverty stricken slums of London, post World War Two.

This action had a major impact on T. and as it was due to his father losing his job as an architect, I believe that he chose Old Misery’s house to destroy not because he was targeting Old Misery, but because the architect Wren built the house. It became an act of revenge in the respect that he was ruining an architect’s work just as an architect had ruined his family’s life. The fact that T. becomes so focused on destroying the house shows the sheer determination that he possesses.

Overall, throughout the story, we are blatantly shown the manifold of differences between T. and the rest of the gang, his intelligence, education, up bringing, maturity and manners. Then there is also his encounter of being wrenched out of an aristocratic being and then being thrown into an atmosphere of destitution and distress in the lower areas of London, which taught him many lessons about love and hate “all of this love and hate…it’s soft, it’s hooey”, and gives us an in-depth look at his outlook on life, showing us that he has been extremely damaged emotionally with his change of lifestyle. 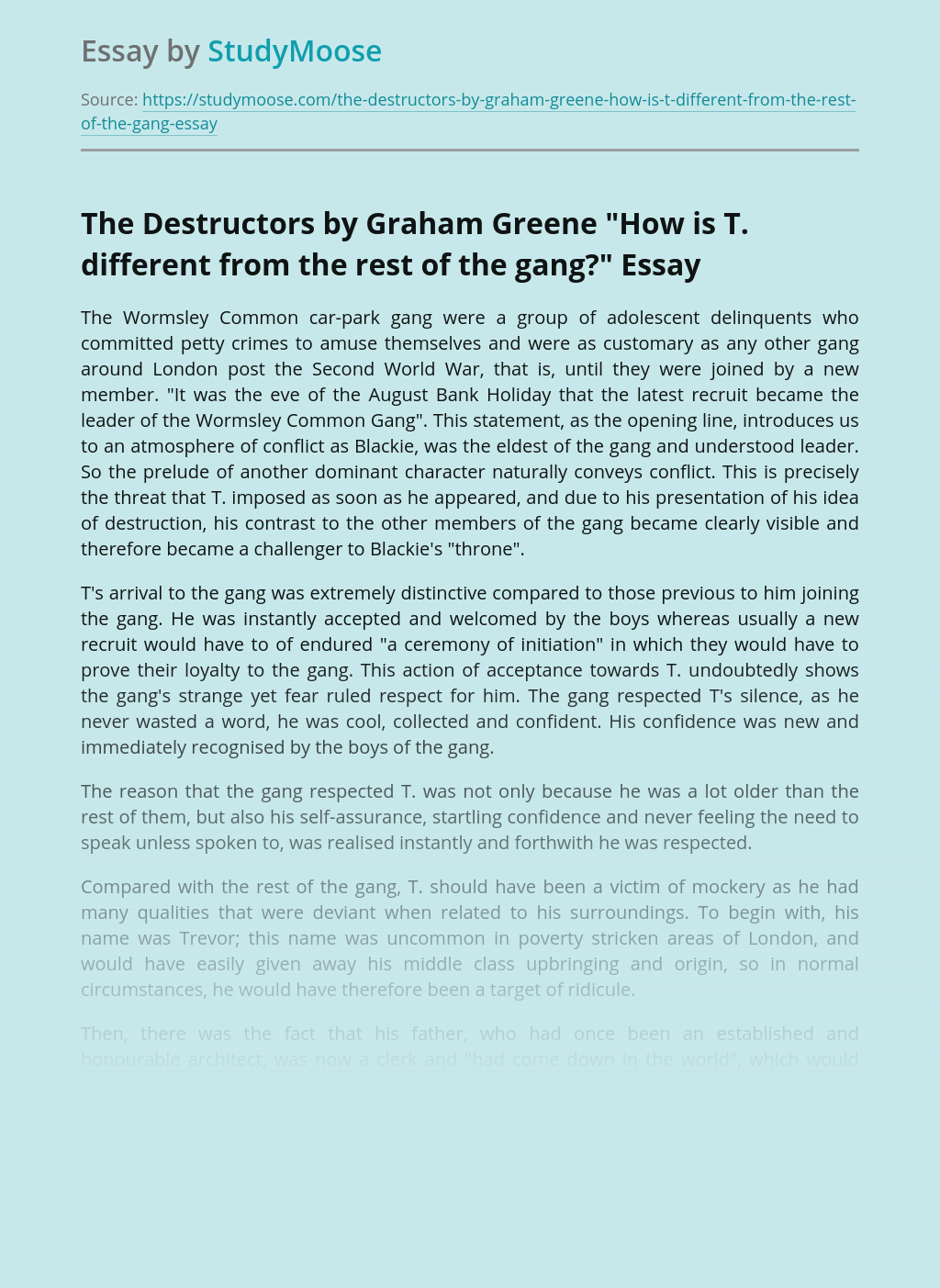 Turn in your highest-quality paper
Get a qualified writer to help you with
“ The Wormsley Common Car-Park Gang ”
Get high-quality paper
Helping students since 2015
Stay Safe, Stay Original