Gang Violence in On the Sidewalk Bleeding

In the short story “On the sidewalk bleeding,” by Evan Hunter, the author makes us feel sympathy for the main character by using a variety of techniques such as characterisation, plot structure and language. The story opens with the main character, Andy, who has just been stabbed because he is in a gang. Unfortunately it is too late to change what had happened and as a result the reader feels immense pity for him when he dies. This short story includes the themes of regret and how gang violence causes loss of identity.

Don't use plagiarized sources. Get your custom essay on
“ Gang Violence in On the Sidewalk Bleeding ”
Get custom paper
NEW! smart matching with writer

Firstly the author makes the reader feel sympathetic towards Andy by using effective techniques to emphasise the agony and the painful phase that Andy is going through. The author says that Andy is in so much pain that no sound comes out of his mouth. The passage says, “There was no voice in his throat only the bubbling of blood between his lips.”

In this quote, alliteration is used with the words “bubbling of blood.

” The author uses this technique to highlight how much pain and terror gangs can create. This is also effective as it creates a gruesome image in the reader’s mind of Andy in his current situation. Therefore we feel sorry for Andy as he cannot even call for help.

Another way the author makes us sympathise for Andy is how the author uses the idea of Andy being isolated from the rest of the world. Andy is lying in the alley far from help and he can hear music but nothing or no-one is able to help him.

We see this when the writes says, “He watched the world passing,” and also the quote, “He could hear the faint noise of music now, from and long, long way off.” These two extracts from the passage illustrate that although Andy is dying the world is still moving and no one cares or even looks at Andy. Also it shows to us that Andy is isolated from society. At this point in the story Andy realises that being in a gang has detached him from the rest of the world and there is no going back. This relates to the theme of regret as Andy starts to regret the choices he made in life. The reader starts to feel even sorrier for Andy as he starts to repent what he has done but he can’t do anything to save himself now as it is too late.

Furthermore, throughout the story the author has created characters which pass by Andy but unfortunately for Andy they don’t help him for different reasons. When the third useless person comes into the alley, Andy is in hope that she will help him but sadly she doesn’t. The story says, “An old lady stopped at the other end of the alley like a queen.” In this quote the author uses a simile to show us how the old lady was acting and how she considered herself nothing less than a queen. This quote makes us sad as Andy has now had three attempts of surviving but all of them have slipped away just because he is in a gang. This also relates to the theme of how gangs cause loss of identity as if he wasn’t in a gang he would have had at least one chance of surviving out of the three. This again makes the reader sympathise towards Andy.

Furthermore feel sorry for Andy by using personifying the jacket and the knife. Andy knows that he is dying and wants to be known as an individual and not a royal. The quote is, “Had they stabbed him, Andy or had they only stabbed the jacket and the title, and what good was the title if you were dying. ” In this personification is used to emphasise that the guardians only stabbed Andy simply because he was a royal and show that the knife had no hatred towards Andy only the jacket and the title. The jacket symbolises the royals and the knife symbolises the guardians to indicate how much hatred is between the two gangs.

Similarly this idea is further developed when Andy blames the jacket for him loosing his life. Andy begins to realise that if there was no jacket there wouldn’t have been a rumble in the first place. The short story says, “The jacket was a stupid meaningless thing, which was robbing him off his life.”

The jacket and title has ruined his life and future. The word choice of “meaningless” shows that where once the title and the jacket was so important to Andy and how he was proud of it, but now the same jacket and title mean nothing to Andy but instead detests them. Also personification is used to make the knife and jacket seem like people. This suggests that objects are more important and this goes back to the theme of when you join a gang you lose your identity. The theme here shows that when you join a gang you are no longer an individual but you are a gang member instead.

Finally Andy at the end of the story was ashamed of being called a royal and his new identity. Andy tries to tell the world that he not a royal but only Andy. The reader sees this when the writer says, “I’m Andy,’ he screamed wordlessly, ‘I’m Andy.’” Reputation of Andy’s name emphasises to us that he wants to be known as Andy and not a royal before he dies. Juxtaposition of “screamed wordlessly” is used to show that Andy is trying to scream but he only can in his mind as he is in too much pain to speak. By this point Andy is utterly helpless and can’t do anything. We feel pity towards Andy as he can’t even speak his feeling so there is no chance of him surviving.

In conclusion the author has used many techniques of writer’s craft such personification and language to make the reader sympathise towards the main character Andy. Although not much action happens in the short story, the author still manages to make us feel sorry for Andy as Andy goes through his life and realises that he has done nothing major in his life expect make stupid mistake of joining a gang which leads him to losing his life.

Gang Violence in On the Sidewalk Bleeding. (2016, Apr 10). Retrieved from https://studymoose.com/gang-violence-in-on-the-sidewalk-bleeding-essay 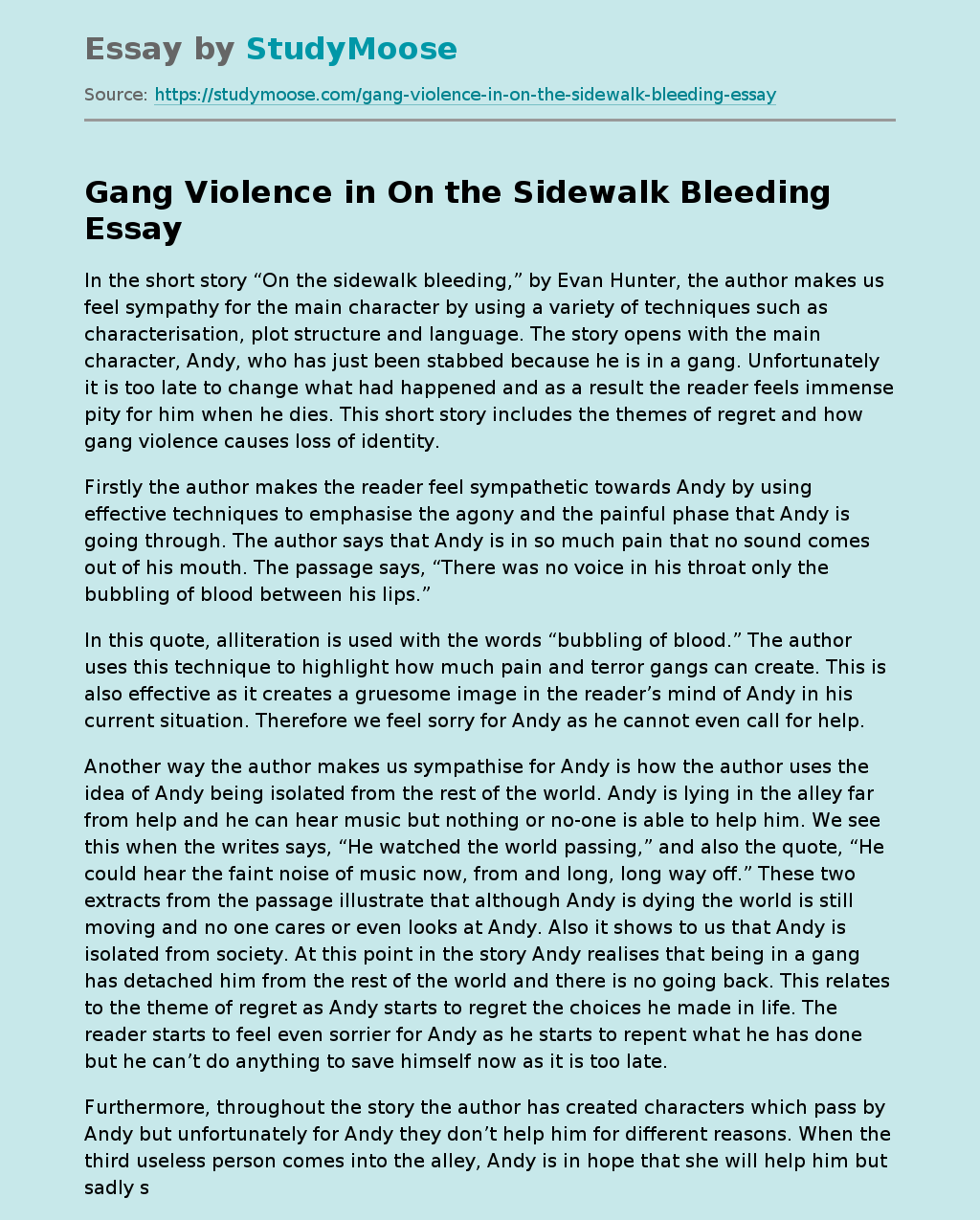