"On The Sidewalk Bleeding"

On the Sidewalk Bleeding

“On the Sidewalk Bleeding”, by Evan Hunter is a story about a boy from a gang, getting murdered in a dark alley, by members of the rival gang. It is written in the third person omniscient point of view. The story focuses on the theme of realization of one’s true identity. This theme is depicted with the help of several literary devices such as symbolism, to create depth in the meaning of the story, thoughtful use of irony and characterization elements, which create clarity in the readers mind about the characters thoughts and situation.

Don't use plagiarized sources. Get your custom essay on
“ “On The Sidewalk Bleeding” ”
Get custom paper
NEW! smart matching with writer

Symbolism plays a major role in highlighting the character’s realization of his true identity as the purple jacket, which is the main symbol in the story, represents labels put on people in society. A young couple sees Andy in pain and the boy rushes towards him but soon denies him help. “He saw the lettering on the jacket then. THE ROYALS.

” shows the reason the couple did not want to get involved. The jacket being a symbol of prejudgment, determines the way society sees Andy. The name on the jacket defines him to the passers by and the person inside does not matter to them. The Royals being written on the jacket causes the couple to rethink the consequences of helping him. Instead of asking him his name or what had happened, they make a judgment that Andy could only mean danger and trouble, because of the gang name on his jacket.

The jacket, the symbol of prejudice, leads to his death. Right before he dies “It seemed very important to him that he take off the purple jacket.” At this point he realizes that he is dying and needs to be known for who he really is, instead of for the name on his jacket.

He comes to realize in his last moments, that his true identity is his own name. Hence he tries to take off the label, literally and metaphorically, that society has given to him. The removal of the jacket symbolizes Andy’s desire and attempt to get rid of the stereotypical label of The Royals and the prejudice that it brings along. However, changing society’s opinion is not easy for Andy. This is seen when “He lay struggling with the shiny jacket.” The denotation here is shown by the word ‘struggle’. It shows that he cannot remove the jacket as easily, because he is wounded. However the line suggests that, even though Andy desperately tries to get rid of people’s influenced, prejudiced view of looking at him, he cannot do so very easily. This implies the author’s opinion that society’s prejudiced opinions cannot be easily escaped, and that disposing of the labels one acquires through their life, is a lifelong struggle. The jacket being the symbol for such labels and prejudice, removing it shows Andy’s realization of his true identity, making clear that he now wants to be known for who he really is, eliminating any influence that the jacket may have.

Hunter uses irony to emphasize the contrast between the character’s realization of his true identity and society’s perception of the character. This is shown when readers learn that “He felt alone.” It is ironic that he feels lonely when the reason for his murder is that he belongs to a gang. Belonging to a large gang which was evidently a great part of his life, and yet being lonely while suffering, suggests that Andy comes to realized that in the long run, he should stand alone, defined by his own individuality. He realizes that ‘The Royals’ was just a name given to the gang and it should not, in any way, influence people’s opinion of him as a person. Another example of irony can be seen in the end of the story when “He was very close to dying when they found him, he did not want them to say, “Oh, it’s a Royal.”…“A Royal.” Andy’s last wish is to be recognized as ‘Andy’ and not as ‘a Royal’. The fact that he is on the verge of death makes readers believe that he will be granted his dying wish. However, at the end of the story, when cops find his dead body, they do exactly what he is afraid they will do. Andy struggles in his suffering, to remove the jacket in an attempt to eliminate its influence, but in the end ironically, the cop picks it up and refers to him as “A Royal.” The cop completely ignores the fact that his name is Andy and repeats the title as he writes it down, emphasizing on the ironic idea of society disregarding Andy’s dying attempts to be known as an individual. Dramatic irony is presented when it is said that, “The jacket was a stupid meaningless thing”.

The jacket is described as meaningless when, ironically, the jacket carries tremendous meaning to society as portrayed in the story, being the sole reason of his death. Had he not been wearing the jacket, he would not have been denied help and wouldn’t have been shot in the first place. In this situation, the readers understand a completely different connotation of the jacket compared to the character’s understanding of its purpose. The jacket symbolizes the prejudgment in society to the readers, while it seemingly carries no meaning to Andy. Such use of irony throughout the story convinces the reader of Andy’s struggle to realize and be recognized for his true identity.

The characterization elements used in the story, focusing on Andy’s dynamic character, highlight the theme of realization of one’s true identity. “Even in his pain, there had been some sort of pride in knowing he was a Royal. Now there was no pride at all.” shows the change in Andy’s thinking, before and after being stabbed. He has always felt proud about being a part of The Royals and had never imagined this. As a result of being assaulted just for being in the gang, he now understood the significance of being known for his true identity rather than as a member of the gang and felt no pride in wearing the title of ‘The Royals’ anymore. His character is seen to have changed significantly as he transitions from being oblivious and proud of the title to being filled with regret and misery. In “Wondered why the rumbles and the jumps and the purple jacket has always seemed so important to him before. Now they seemed like such small things in a world he was missing.” readers understand that not only has Andy changed his attitude towards the jacket and the title, but also his perspective of the world has changed. At first he is so proud and taken up by the fact that he is part of a famous gang, that he forgets to appreciate or even notice the other things in the world.

After lying on the sidewalk, dying, he realizes that there is much more to life than gang brawls and jackets with titles. It is seen that had he lived, he would have changed the way he lived. His character changes from a materialistic, proud teenager to a more mature, aware and perceptive human being, desperate to live. Andy comes to doubt the meaning of his title, “He was a Royal. There had been meaning to the title… he wondered about the meaning. If he died he was Andy. He was not a Royal.” Initially the jacket means everything to Andy. He mentions how ecstatic he was when The Royals accepted him. He now understood that it was all over and that the title was now worth nothing. He wanted to be known as Andy before and after his death. He himself was proud of being A Royal and recognized himself as one. However as he dies, he realizes that he was more than just ‘A Royal’ and wanted everyone to know that. He was no more proud or infatuated by the title and appreciated his true identity, which was his name. Andy’s character changes in many ways through the course of the story, the main change being recognizing the importance of his individuality, as he understands the prejudice that exists against the gangs in society. The characterization elements help readers see this dynamic character, giving a better understanding of Andy’s realization of his true identity.

The theme of realization of one’s true identity is successfully presented through the use of symbolism, irony and characterization elements. The jacket symbolizes the prejudgment in society, marking its removal as a turning point in Andy’s discovery of his individuality. Irony shows the contrast between the character’s changing feelings and the reality. Characterization elements portray the character as a dynamic character that changes drastically in terms of thoughts, feelings and perspective, by the end of the story. These literary devices help readers understand the theme of realization of one’s true identity.

"On The Sidewalk Bleeding". (2016, Apr 05). Retrieved from https://studymoose.com/on-the-sidewalk-bleeding-2-essay 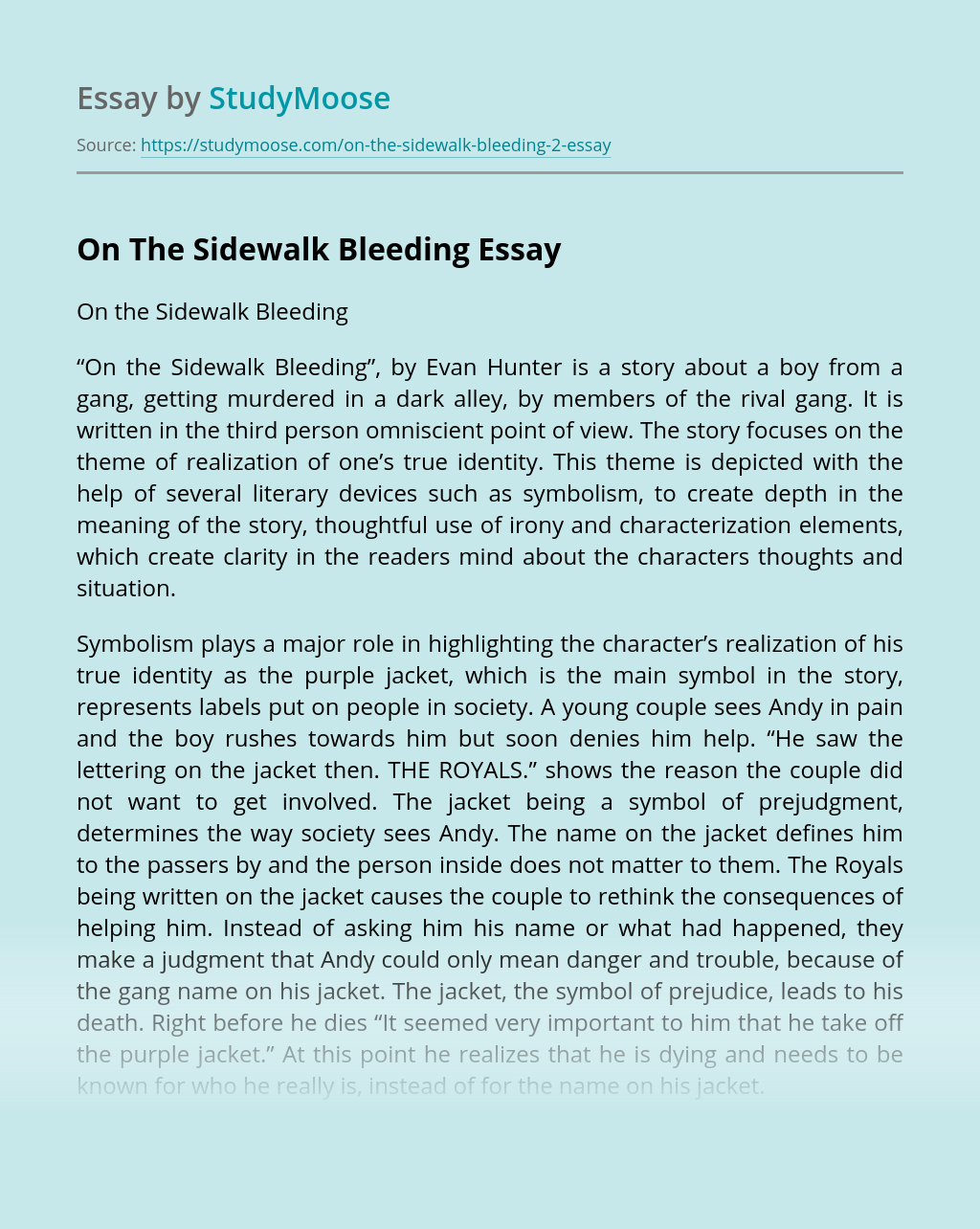