A gang is a group of people that form a organization and assemble trust within each other. In the early usage gang use to refer to workmen but now gang refers to a group of criminals. There are many reasons why people join gangs. One of the most common reasons why people join gangs is a sense of acceptance. It gives the person a sense of family or identity. Teenagers are in the process of developing their own life. These gangs can offer the teen a sense of purpose, belonging and way of life.

Don't use plagiarized sources.
Get Your Custom Essay on Why People Join Gangs Just from $13,9/Page

The leader of the group is looked upon as a leader or a parental figure. The other members are seen as family members.

This doesn’t mean that only people with families torn apart join gangs, but occasionally if a individual sees his or her parents fighting or doesnt show them enough love may want to start looking for another family elsewhere. Their emotional state now makes them easy targets for gang members.

Some other reasons why people join gangs are to make money, curiosity, and peer pressure. An individual who may want to join a gang may have financial problems. A person not working can be desperate for money and would want to join a gang to perform illegal activities such as selling drugs.

Younger kids may deliver packages containing drugs or illegal merchandise and also all the older kids who know the risk might be tempted to do it because all the money involved. Making easy money is one of the most dangerous aspects of gangs. In some cases, a person would join a gang out of curiosity. A person would just want to be in a gang to find out how it feels and how their life would be different. A teenager can become pressured by other gang members or friends to join a gang. An adolescent would join the gang because they would like to be accepted by their peers.

Teenagers would join a gang through a form of peer pressure, another would join the gang to prove to their peers that they are not afraid. Some kids join these groups because it gives them shelter and protection. If they are living in a place where violence is a daily occurrence, they’ll think that joining these groups will be the solution. The threat can also come from other gang members. Sometimes, youths may feel they cant stand aside and be neutral because their afraid that they might become a victim. They would have to choose a side.

Choosing a side usually leads to more trouble and violence. When young people think of these groups, they imagine all sorts of thrilling activities. They know the risks involved, but that itself becomes part of the attraction. Usually, the sense of action and adventure outweigh the consequences. There are many ways one can tell if one is involved in a gang. Characteristics such colors, hand signals, clothing, jewelry, hair styles, fingernails, slogans, flags, secret greetings, all show if someone is involved in a gang.

There are a lot of signs that your child may be in a gang some signs include; drawing gang symbols, showing an unusual interest in one or two particular colors of clothing or a particular logo or begins dressing in traditional gang clothes, posses a weapon, having an interest in gangster influenced music, videos, movies or websites, using unusual hand signs and gang slang while communicating with friends, coming home with unexplained physical injuries (fighting related) or frequently having contact with authority figures or police.

Although there are many reasons why young children join gangs, there are many ways to prevent it from happening also. The first step would to make sure the living environment is safe. Another way one can prevent a child from joining a gang is keeping that child busy such as enrolling them in school clubs and other after school programs. The parent can also spend time with them and show them love and affection.

Simple things as this can make a child feel loved, wanted and can keep him or her away from gangs and other people involved in gangs There are a few risk when someone is involved in gangs. Being in a gang can lead to problem behaviors, and can include serious violence and delinquency. The major risk factor are individual characteristics such as school experiences and performance, peer group influences, and the community context. Other risk are involvement in alcohol, drug, violence, poor family management, low school attachment and achievement. 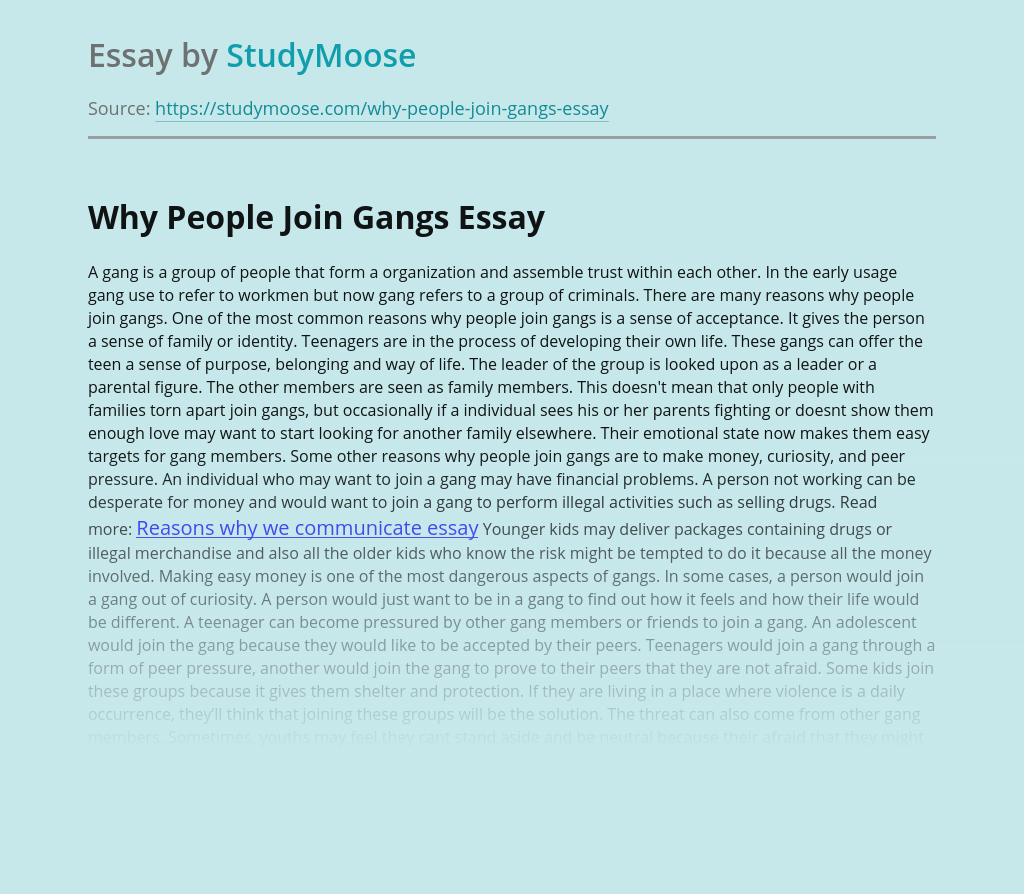 1.0 Introduction In early 2008, Bangladesh Telecommunication Regulatory Commission (BTRC) announced that reorganization of the country’s telecom interconnection architecture as per International Long Distance Telecommunication Services (ILDTS) Policy – 2007 has to be completed by the mid of August, 2008 (BTRC, 2008a). This announcement by the telecom regulator obligated relevant telecom operators (e.g. mobile and...

Standards and Ethics of McDonald’s

A code of conduct and ethics is conducive to running any business. In promoting these positive actions through out the company they should be clear and concise and include all people involved throughout the entire company. These policies should have a clear view on how to treat your customers or clients in a respectful manner...

Get Essay
Catcher in the Rye

The story takes place in Manhattan and is about a young boy named Holden Caulfield, it is about the learning experience that takes place and how an immature child tried to come to terms with multiple problems. In J. D. Salinger’s bildungsroman, Catcher in the Rye, Salinger utilizes the symbols, the red hunting hat; Allie’s...

With this in mind, organizations turn to management to combat the budding problem, through organizing. Organizing involves the structuring of the resources of the organization in order to achieve its objectives. This structuring includes: *Dividing tasks into jobs (Adam Smith 1700’s). *Assigning jobs. *Clustering of jobs into units, departments etc. to form the shape of...

Like the Dictaphone a voice recognition system or software is used to record the spoken notes of medical professionals for transcription at a later date. This system is capable of turning spoken words into words on a screen. Voice recognition has been around for over 60 years used mostly by the government. The technology only...