The Lottery, The Destructors

Fiction Essay Thesis and Outline
Thesis Statement
In the short stories “The Lottery” and “The Destructors” even though the stories are in two different settings and time frames, the characters and tone of the stories are similar in the fact the characters are subject to difficult challenges of the environments they are living in.

“The Lottery” is set on a sunny day in a small farming village in New England. The villiage consists of three hundred residence and the time frame of the story is between 10 a.m. and noon on June 27. The townspeople living in the village have their focus on the yearly harvest to see them through the winter.

Ever since the village was founded the townspeople have taken part in a ‘Lottery ‘held in late June that picks one person to be sacrificed in honor of the harvest. “The Destructors” takes place in East London after World War II at the Wormsley Common Underground Station. The story is set in a grey ruin from where bombs had fallen on the neighborhood during the war. The state of the neighborhood in which an adolescent gang live and play is very dark and gloomy. Do to the hopeless setting of the story is the reason for the actions and mindset of the gang.

1. The Lottery main characters
Bill Hutchinson drew the lottery ticket with the black dot. His wife protested, he did not but he accepted the Lotteries tradition. Tessie Hutchinson is Bill Hutchinson’s wife. When Bill draws the black-dotted Lottery ticket, she protests. She claims Bill was rushed. When she pulls the ticket with the black dot after a the family had the option of a do over she continues to protests as she is stoned to death. Old Man Warner is the oldest man in the town and hates change. He has been through 77 Lotteries and he is for upholding tradition and feels there is no room for change. He also says, “Lottery in June, corn be heavy soon,” during the story, which suggests that the Lottery may be some sort of sacrifice. Mr. Summers conducts the Lottery. He is sworn in by the post master before conducting the Lottery. Each year he brings up a new box which is never used. The original is always used to keep with tradition and is old and ragged. Mr. Harry Graves is the post master. He assists Mr. Summers in the Lottery The Lottery itself is the main character. The Lottery is the story’s conflict, and the townspeople would not have tension if not for the lottery. The townspeople are controlled by the lottery each year, and like the box used year after year it is getting old to the townspeople

Trevor, or T, is quite at the beginning, has no emotion and different from the other gang members. He comes from an upper class society, is educated, organized and natural leader and wants revenge from the war and takes it out by join the adolescent gang. Blackie is the old leader of the gang until takes over due to his popularity from the other gang members. Blackie is not as well educated, and becomes jealous of T. He love breaking laws and want the gang to be famous. Old Misery is an old man that lives in a big house that was notcompletely destroyed by the bombs of World War II. He has lots of money, kind and generous but naïve. His house was destroyed by the gang Mike is very young and naïve. He is obedient and has a better relationship with his family then the other gang member. The Truck Driver is also naïve but very experienced about destroying things and found it funning when Old Misery’s house fell.

Comparison of the Stories

Both stories had grime endings, The Lottery took until the end to figure out and The Destructors the reader could tell due to the beginning setting. The characters of both stories reveal similar to one another as well. Trevor and Blackie could be compared the Mr. Summers and Mr. Graves in that all these characters where leaders of the events that took place in both stories. Old Man Warner and Mike are similar due to they both go along with what the crowd considers socially acceptable. Old Man Warner doesn’t want the Lottery to end even though it is out of date and has a grime ending. Mike follows the gang and does whatever they feel is right even if it mean destroying something that is not his. Old Misery and Tessie Hutchinson both are the victims in the two stories. Tessie was sacrificed due to an unnecessary Lottery that the townspeople found to be tradition. Old Misery lost his home under circumstance not under his control. He did not deserve the actions of the gang but with the mindset and loss of innocents of the gang they chose to take away his home. Lastly we can compare Bill Hutchinson and the Truck Driver as going along with their environment. Bill accepted the Lottery even if it meant someone is kill and when his wife drew the lot the second time he joined the rest of the townspeople in putting her to death. The Truck Driver had a small yet major roll in his story when he was the one to completely destroy the house. When the gang tied a rope from the house to his truck and he drove off the house fell. Even though it wasn’t his intent to destroy the house he showed no sympathy for what occurred and even told Old Misery he thought it was funny what happened.

At the end of the Lottery we find out what it means to be the winner, or loser, considering the person who draws the ticket is stoned to death by the townspeople. People of the town go along with the lottery because it is socially acceptable and a tradition. The tradition is getting old to the people but continues on. The townspeople know the end result of the lottery and know the end result to be sacrificing the “winner”. They nare all prepared to do this act. What’s one of the most disturbing parts of the story is Tessie’s children Nancy Hutchinson and Bill Jr., after drawing blank lots they laugh knowing their father and mother still have to draw and one of them will have to be sacrificed. Tessie husband Bill Hutchinson after the drawing does not plead for his wife but instead becomes one of the stoners. In The Destructors we see how the World War II and peer pressure had great impacts on the lives of the characters. All the characters of the story where easily influenced at such a young age. There is a good chance that having been placed in a different location, with a different home life, all the characters would have turned out to be much different. With the characters loss of innocence due to the setting of the story, the ircumstances and the conditions had a huge impact on their minds and lives. All the characters minds were effected especially Trevor considering His father and mother where of high class status until the war and his father lost his job. Everything seemed to be taken away from Trevor and he joined the gang. With T’s mind on losing everything and seeing such destruction he saw Mr. Thomas’s (Old Misery) house as an annoyance and wanted it destroyed like everything else in his life. The other character where effected differently however they to where effected by losing their innocents and care by what they had witnessed due to the war.

The Lottery, The Destructors. (2016, Mar 05). Retrieved from http://studymoose.com/the-lottery-the-destructors-essay 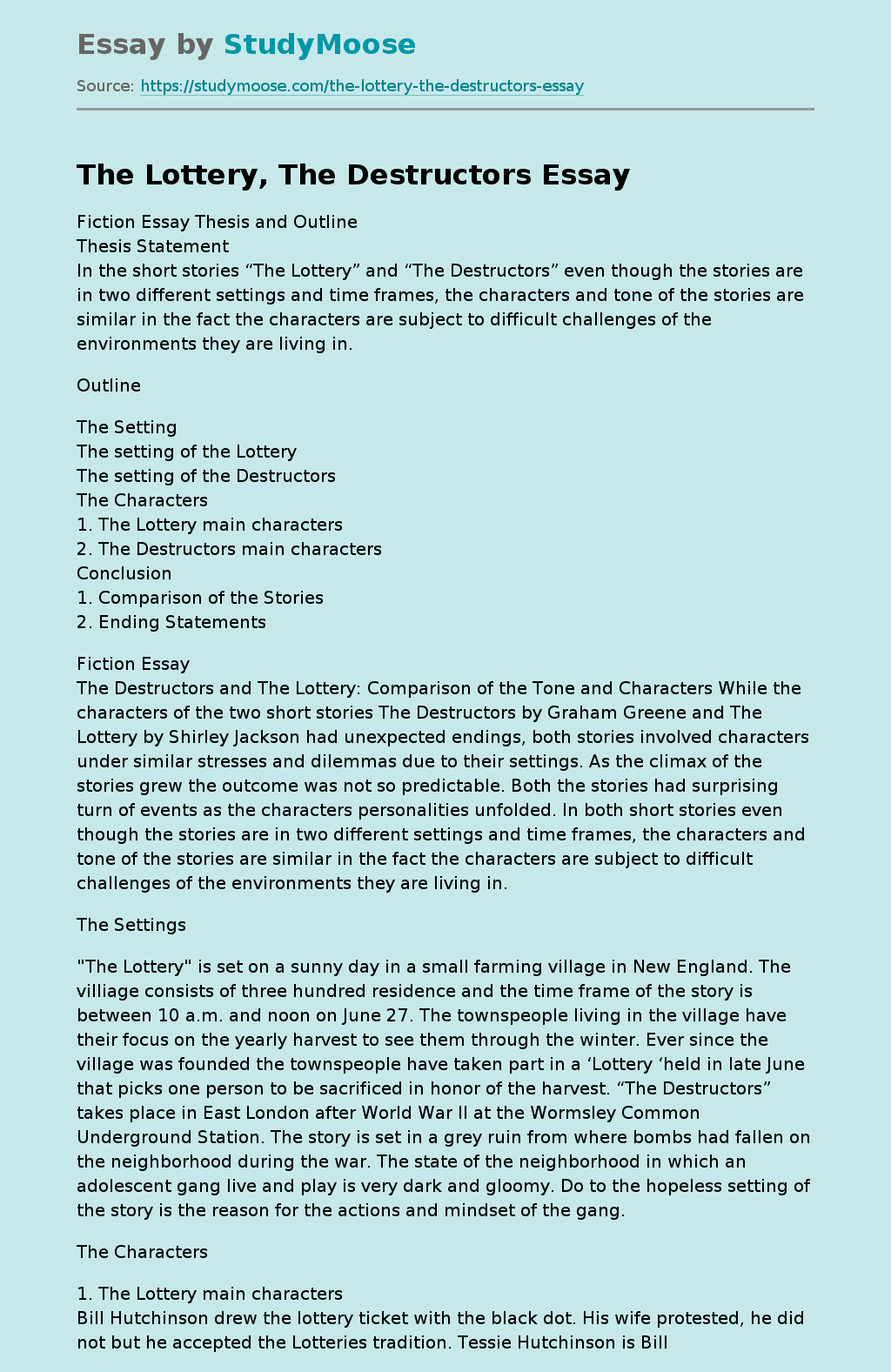