Morality in Graham Greene's "I Spy"

As World War I raged about Europe, Great Britain took every measure available to ensure the war didn’t spread into their own backyard. Their army was doing fine fighting elsewhere in France and Germany, but as William I proved in 1066, when you invade England, it’s not the English that win. Britons lived in constant fear of a takeover by the German “huns,” and this fear inspired Graham Greene to comment on morality in man in his short story, “I Spy.

” Greene explains, through the conflict that his protagonists suffer, that sometimes society’s morals are artificially removed, for example in a time of war in which the object is to kill as many people as possible that aren’t on your side. In these situations, people have to make their own decisions about morality and right and wrong, and this absolutely terrifies them. This is shown in “I Spy” through the characters, imagery, and setting in the story.

The main character in “I Spy” is Charlie Stowe, a twelve year old boy living in England.

Charlie is teased by boys at school about never having smoked a cigarette, so one night sneaks downstairs to his father’s tobacconist shop to have one. He knows this is not only wrong but illegal, but does it anyways to try to mitigate his schoolmates’ ridicule. Since Charlie knows he is doing wrong, throughout the story he has an overbearing fear of being caught. Apparently for Charlie, however, the consequences of being caught stealing cigarettes are less than the consequences of not smoking at all, so he goes through with his plan.

The other main character in the story is Charlie’s father who owns the shop. He is described as an ‘unreal wraith,’ not loved by his son.

As the story progresses, it becomes evident that Mr. Stowe has been taken into custody for being a spy, and is being brought to the shop to get his coat before he is led, presumably, to trial and execution. It is not clear whether Mr. Stowe became a spy because he was a tobacconist (specializing in imports from Turkey, a WW-I ally of Germany), or whether he became a tobacconist because he was a spy (providing a common gathering place, making it easy to pass information or items back and forth). It is clear, however, from Charlie’s memories of his father fortifying himself with proverbs and muttering to himself, that he may not have wanted to hold his traitorous occupation. Both Charlie’s and his father’s society’s morals have been removed, Charlie’s by his schoolmates and Mr. Stowe, probably, by German spies coercing him to join their ranks. Both of them know they are doing wrong and, though they display their fear differently, are frightened nonetheless about what might happen if they don’t do their respective tasks.

The imagery in “I Spy” also helps show the central idea of fear. Throughout the story, light is represented as a danger of being caught, and each time Charlie shies away from the light. The candle in his mother’s room, the spotlights sweeping the windows of the shop, and the policeman’s flashlight all provide threats to Charlie’s mission of stealing a cigarette. In addition, the nature of the shop itself lends itself to intrigue and fear. The phrase “smoke-filled room” traditionally stirs feelings of clandestine deals and surreptitious secrets, and this room is no different. The apprehension is almost as visible as the smoke in this room of shadowy transactions. Imagery, in addition to showing lack of morals, contrasts it by showing pillars of morality and fortitude, the two agents accompanying Mr. Stowe. With their identical suits, bowlers, and mackintoshes, these government agents, presumably from the British MI-5, represent those that do not have to make decisions for themselves and have their code of morality laid before them.

Finally, the setting of “I Spy” does a great deal to support the central idea of having to choose ones moral decisions. This is Great Britain in the early twentieth century, when the last remnants of the British Empire are being swept away and global warfare is everyone’s biggest fear. Britain is also coming off its “jingoism” (meaning incredibly nationalistic) policy, meaning that there are a great deal of ardent patriots living in the area. Charlie’s mother is one of these, having nothing but good to say about the queen, and nothing but bad to say about the Germans. Charlie’s father also validates the patriotism, saying that once the neighbors find out he is a spy, they will tear down the tobacconists shop. These neighbors would normally not band together to do such a violent act, but for the time.

They are used to hearing that everything related to Britain is perfect, and everything related to Germany should be destroyed, and will act accordingly. The story takes place in a coastal town, so spotlights are continually sweeping across the sea looking for German boats, and across the skies looking for enemy dirigibles. These lights serve a dual purpose, however, and subconsciously remind the population that even they can be watched. This may lead to conflict within ordinary people, who may always worry whether their actions are “good” or “good for the state” or could be interpreted as conflicting with the interests of Britain. It is evident that these lights, built to protect, can also strike fear into the hearts of people struggling to make their everyday moral decisions.

There will always be instances in which definite morality is suspended or removed. People will always be forced to make up their own set of morals and abide by them, and they will always be fearful that their set of morals is wrong. The differences that arise among people is how they act on these fears and code of morals. Charlie and his father both experienced the fear of being discovered in the wrong. They also both experienced the despair at knowing there is no other choice but the action they are taking. In reality, however, both Charlie and his father took the easy way out in dealing with their problems. Charlie could have simply stood up to his tormenters and defended his right not to smoke, and Mr. Stowes could have refused to become a spy for Germany. Both of these responses could have resulted in serious personal injury, but it should have been a small price to pay for keeping one’s honor.

Morality in Graham Greene's "I Spy". (2016, Jul 16). Retrieved from http://studymoose.com/morality-in-graham-greenes-i-spy-essay 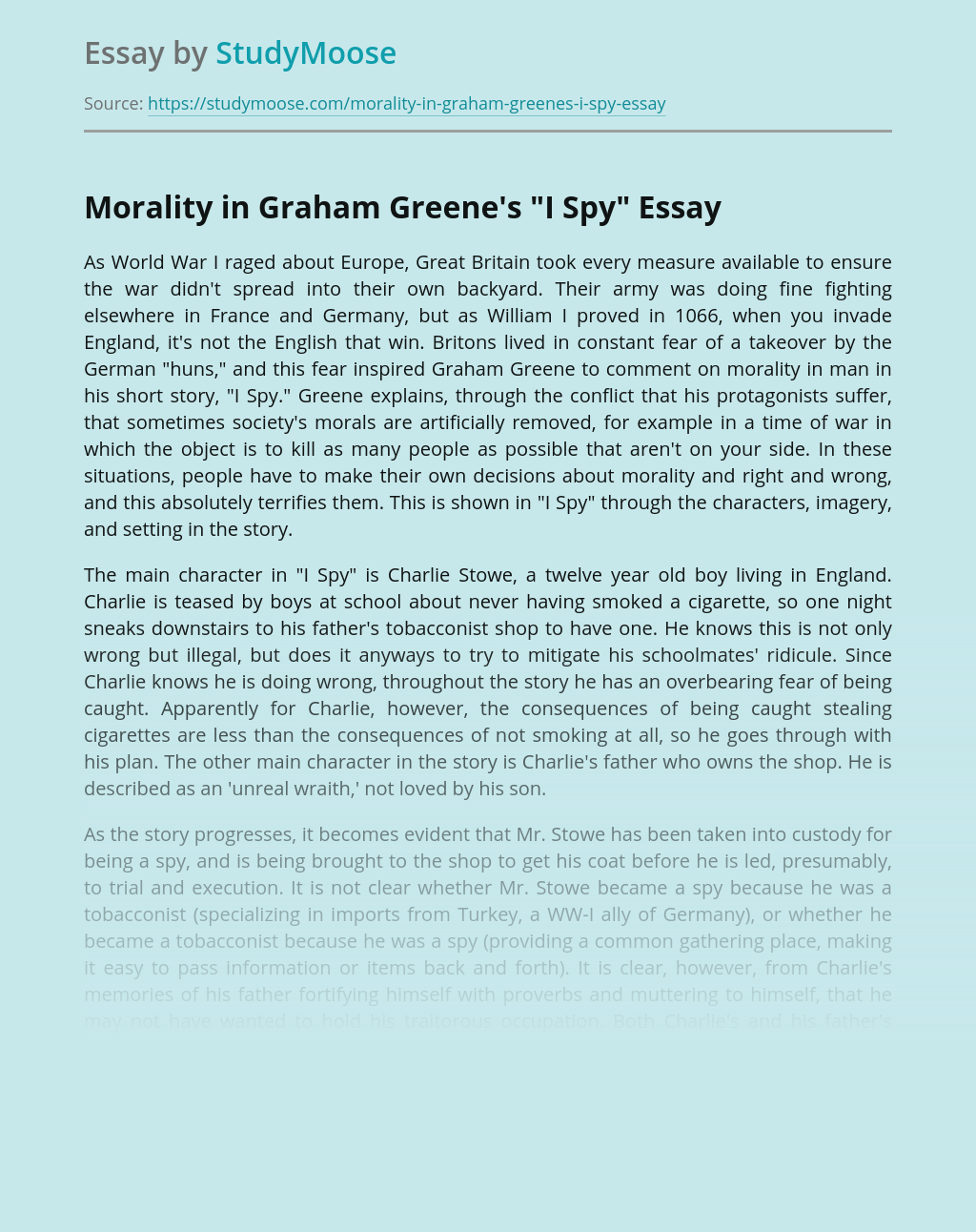 Don’t waste time
Get a verified expert to help you with Morality in Graham Greene’s “I Spy”
Hire verified expert
$35.80 for a 2-page paper
Stay Safe, Stay Original