Abstract
Developments in the world throughout the years have greatly impacted the world in various ways. These developments include technological and socio-political changes. These changes have made social activities today to become incomparable with those from a hundred years ago.

Don't use plagiarized sources.
Get Your Custom Essay on The daily life of teenagers today and that of young people 100 years ago Just from $13,9/Page

In this case teenagers as a social group have fell victim to these changes as. This fact easily unveils itself when evaluating the social activities of the youth today. Their behavior and the use of their leisure time are also compared to that of their colleagues a hundred years ago. Keywords: technology, behavior, social activities.

The daily life of teenagers today and that of young people 100 years ago. Teenagers today make use different types of technological devices, such as TV sets, smartphones and tablets-both at home and school. They also acquire education with the aid of technology. The help of technology in education has replaced the role that parents and teachers used to play in the education of their children. Not only does this refer to the teaching material and method but also to communication skills.

Connors (2011) explains that the main target audience for social media is young people. They waste an insanely huge amount of their time on social networks rather than using it for wise constructive activities (Connors, 2011, p. 45). Presently, teenagers are more educated than they were a hundred years ago. Education that is easily accessed makes the youths more socially active.

As a result, they tend to question the traditions of society. By so doing the young people have become great contributors to change in society, as Silling (2010) describes (Silling, 2010, p. 256). A hundred years ago were conservative and followed customary traditions set by society. This made them inactive since they lacked access to quality education. Connors (2011) explains that teenagers in the old times lacked technology that is available to teenagers today. Their knowledge was not only acquired from their parents but also through extensive reading and used their free time to help their parents around the house and played outdoors (Connors, 2011, p. 67). Back then, education was a part of society that was not highly embraced. Financial challenges that faced many families hindered parents from taking their children to school hence education became a privilege, mostly, for male children.

The culture of the people a century ago did not view females as equals to males. As a result the girls were hardly allowed to take part in the same activities as the boys. Domestic management was an activity fit for women so girls were limited to activities within the domestic sphere. On the other hand, female teenagers today are freely entitled to the same opportunities as their male counterparts. This has been made possible by female movements around the world. It is significantly evident that there is a great difference between the present teenagers and teenagers a hundred years ago. Presently the youth are more used to technology than their colleagues a century ago. They are also more educated compared to their counterparts a hundred years ago. All over the world there has been gender equality in terms of entry into various opportunities unlike a century ago.

The daily life of teenagers today and that of young people 100 years ago. (2016, Mar 11). Retrieved from https://studymoose.com/the-daily-life-of-teenagers-today-and-that-of-young-people-100-years-ago-essay 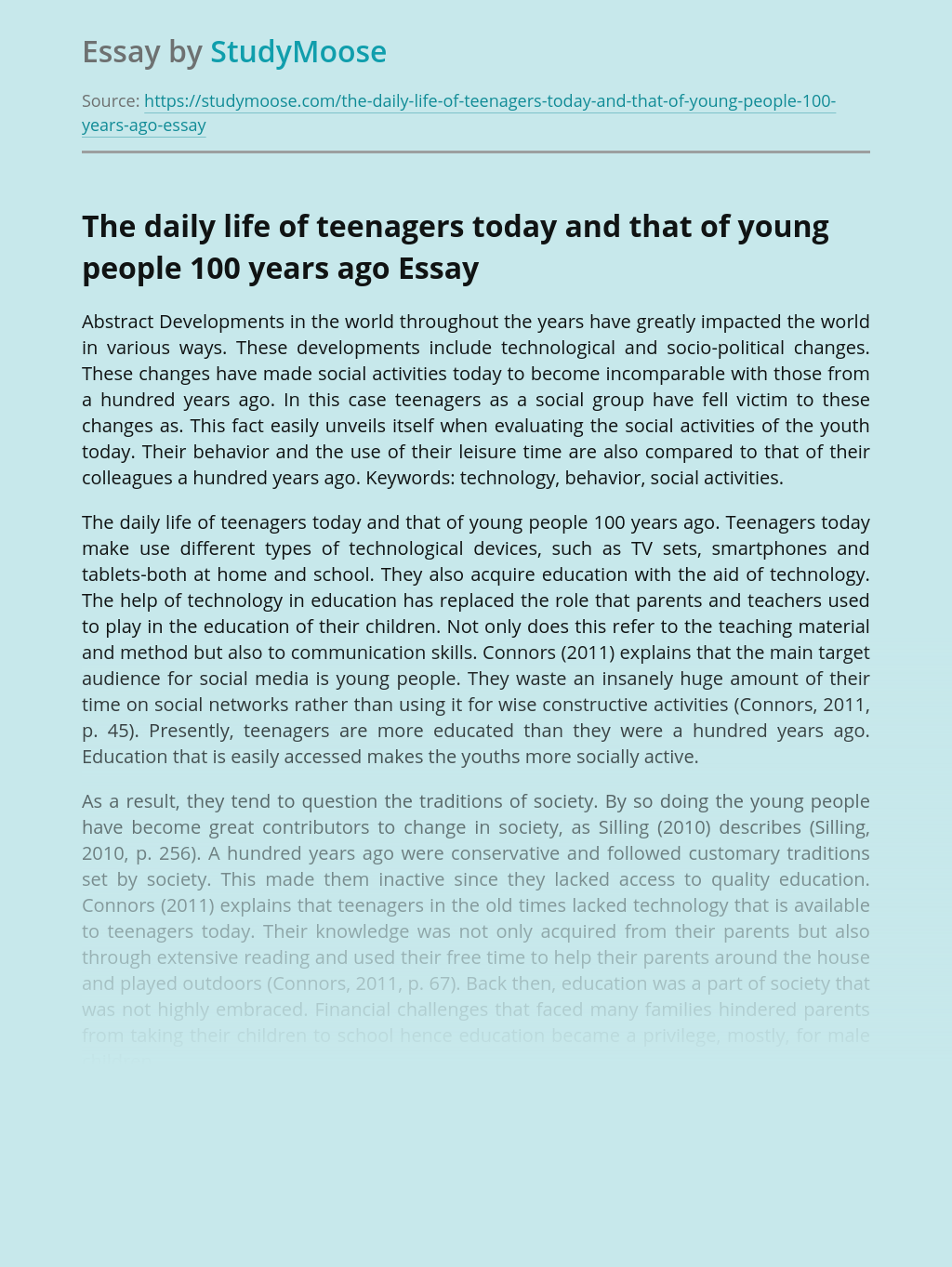 The primary distinction between internal and external assessment are the teachers. Teachers are expected to use classroom assessment as part of the job. There are a variety of ways teachers assess students in order to monitor progress, to grade performance and to modify instruction. But the manner in which teachers choose to assess students has...

Recently, I made a list of what I think my perfect school would look like. As I began developing the list, I was struck by two things: Firstly, how most of it was about making school more student-centered, and secondly, that I didn’t mention technology once. For me, this second trend bears a little more...

Reflective practice is an evolving concept. In the 1930s, John Dewey defined reflective thought as: ‘Active, persistent, and careful consideration of any belief or supposed form of knowledge in the light of the grounds that support it and the further conclusions to which it tends.’ He set out five phases or aspects through which we...

What life holds for us is determined by how much we are willing to sacrifice. In the movie Freedom Writers, Ms. G is the main character. Her way of viewing life gives hope to the people surrounding her. In this essay, I am going to compare her willingness to sacrifice with the sacrifice I was...

The American Dream, the idea that every citizen can be successful if they work hard, is believable to the degree that every student going to school has the same opportunity to learn the skills needed to succeed in society. But if the opportunity for students to attain a sufficient education is imbalanced, then the likelihood...