The Crucible - Who Is To Blame

The Crucible is a play created by American playwright Arthur Miller in 1953. Throughout the play, we understand the characters’ past relationship. On the one hand, the narrator described the specific dissatisfaction and differences between the characters and deepened our understanding of why they were eager to blame each other. On the other hand, in infidelity and controversy, we also feel the beauty and tolerance of human nature. As the story continues to develop, the theme of the article becomes clearer, goodness and judgment impressed me the most.

Don't use plagiarized sources. Get your custom essay on
“ The Crucible – Who Is To Blame ”
Get custom paper
NEW! smart matching with writer

In the play, I think goodness is a major theme. Almost everyone is associated with the concept of goodness because their religion teaches them that the most important thing in life is how God judges them after death. After something happened, their neighbors often came to their homes to provide advice and guidance. Everyone wants to be a good person. From the beginning of the play, Pastor Paris was more concerned about the opinion of the parishioners than his daughter’s condition.

When Abigail followed Tituba’s example and mistakenly admitted that she had witchcraft, she did so because she saw an opportunity to convince the Salem residents that she was a good person.
There are other characters, such as Mary Warren, who confessed that for them, being considered good is more important than telling the truth. Several roles focus on kindness, not what people think of them, and let them think about what kindness means. We have seen this in pastors John Hale, Elizabeth Proctor, and John Proctor.

When Hale attended the show, he believed that he was a good person who could easily recognize a witch. At the end of the play, he examines his conscience and realizes that if he wants to calm himself down, he must encourage guilty people to make false statements. Elizabeth also considered herself a good woman, but at the end of the play, she reflected on her attitude towards her husband. After he admitted to having an affair, she realized that she was ruthless. She said, “He have his goodness now. God forbid I take it from him.”

John Proctor also fought the most fiercely against goodness. He signed a false confession, torn the faith, and finally realized that the only thing he could do was to be honest, and sincere with himself. John Proctor signed a guilty plea, saying that he could not lie to lie, even if this could save his life. He chose death. When John was taken to the place of execution, Pastor Hal begged Elizabeth to change his mind with him, but she refused, saying that he finally got his support, and she would not take him away from him. Throughout the play, John will choose between morals good and evil. He tried to be Elizabeth’s good husband. When she was in danger, he wanted to save her, even at the expense of his reputation. But we also know that he has an affair with Abigail. Even after the end of the relationship, John would still ” gently” look at Abigail from time to time. He was cruel to Mary Warren. Pastor Hal signed the confession, although he said he knew it was wrong. But in the end, John refused to humiliate himself, even at the expense of his own life, which showed that he was ultimately a good person. The price of this kindness is death.

Another theme that struck me in the play was the trial, especially Danforth and John Hale. In the third act of the play, lieutenant governor Danforth tries the accused and the imprisoned inhabitants of Salem. Danforth’s firm and decisive judgment were wrong. Elizabeth, Martha Corey, nurse Rebecca, and many others are not witches at all. Danforth could not change his mind, though all the evidence and logic showed that his conclusion was wrong. Danforth believed that a reliable judge would never reconsider his position. Governor Danforth showed fortitude and excessive adherence to the law in the crucible. Danforth was an intelligent, respected, and successful man.

He came to Salem to oversee the trials of the accused witches, reassured by his ability to administer justice. The chaos of the prosecution did not affect his belief that he was the best judge. At the end of the play, Salem collapses, Abigail escapes and steals Paris’ life savings, and many lives are destroyed, but Danforth still disagrees that the trial is a hoax. He still believes those convicted should not be executed. When John refused to let him post his confession in the city, Danforth sent him to a “high place in the city” to be hanged. Danforth believed in the principle, despite the evidence that he was wrong. He said at the end of the play, “Hang them high over the town! Who weeps for these, weeps for corruption!” Despite the mounting evidence, he could not say they were lying. He just couldn’t go back and admit he’d been lied to. It is chilling that he did not realize that he was involved in the murder of dozens of innocent people. His character represents what can happen when people are too stubborn to listen to reason.

Danforth in the play represents the sin of blind certainty, he refused to accept the truth, because to accept the fact would make him feel ashamed. He would rather see people die. John Hale, however, learned to sit there and stupidly judge his fellow humans. He said in Act 4, “ I come to do the Devil’s work. I come to counsel Christians. They should belie themselves. There is blood on my head! Can you not see the blood on my head!!” He was no longer sure of anything except the Salem witch trials in which he helped condemn and kill innocent people. He told Danforth that he was trying to get innocent prisoners to confess to witchcraft in the hope of saving their lives and that it was his duty to help convict them. By the end of the play, he was no longer concerned with official state court decisions, only with saving lives. Danforth had not learned to judge other people’s dangers, but John Hale had.

In short, this is a drama full of human kindness and moral judgment. People play different roles. They tried to become good, but they became hypocritical. To be a good person, they forget what truth is. For their pride, they also refused to take responsibility for their mistakes. Between good and evil, people struggle. The important thing is not to find out who the witch is, but people’s opinions and judgments. Under the premise of kindness, we must ensure fairness and justice. In the trial, don’t forget the better because you did not accept the defeat, and let the innocent sacrifice.

The Crucible - Who Is To Blame. (2020, Sep 03). Retrieved from https://studymoose.com/the-crucible-who-is-to-blame-essay 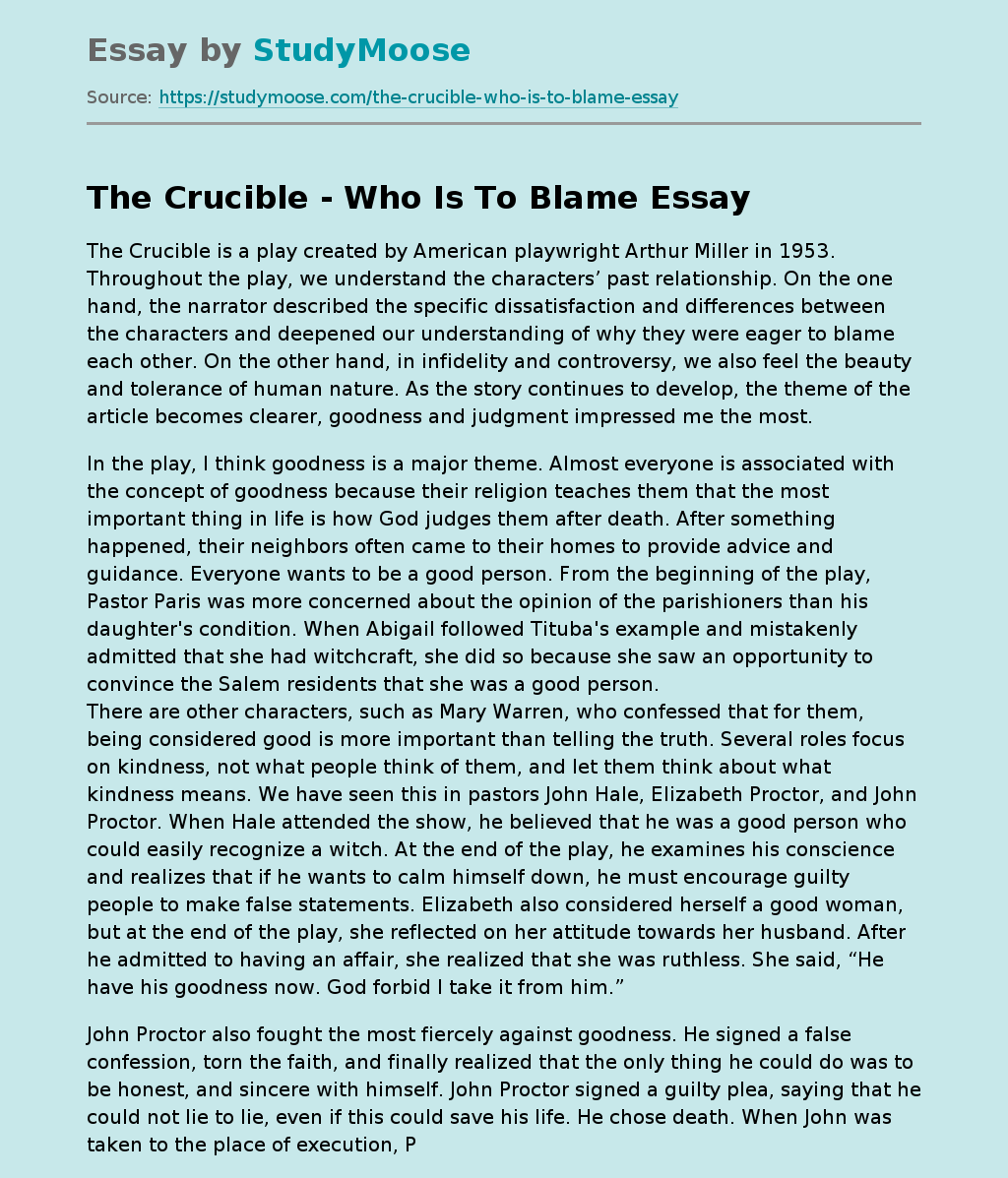