In this excerpt from The Crossing, by Cormac McCarthy, the subject has killed a wolf and is presently brooding over his feelings regarding the fallen creature. His thoughts are displayed in a rather convoluted manner, many of which offset one another, and can cause confusion for the reader. Fortunately, through the usage of diction, syntax, and imagery, McCarthy helps to convey the impact that the experience of the situation has on the main character.

Diction plays an enormous role in expressing the impression the wolf’s death (and circumstances surrounding it) has on the subject.

Don't use plagiarized sources.
Get Your Custom Essay on The Crossing: Cormac McCarthy Just from $13,9/Page

From the onset, the author establishes a dramatic mood by describing the scenery as having “talus sides” (Line: 1) and “tall escarpments”. (Line: 2) As the passage progresses, the passion of the choice of words increases. Such is exemplified in Lines 57 and 58 when the author states: “What blood and bone are made of but can themselves not make on any alter nor by any wound of war”. Such a quote implies that the elemental make-up of a body can create the shell of a creature, but no act of man can bring back a soul to fill the casing.

The terms “blood”, “bone”, and “wound of war” are all very fervent and poignant expressions. Their usage conveys the gravity of the quote itself.

The utilization of a simple, two-lettered word held great meaning to one particular line of the passage: “He took up her stiff head out of the leaves and held it or he reached to hold what cannot be held…” (Lines: 53 – 55). The placement of “or” implies that the subject is confused about his own emotions, but the situation indicates that they are strong. Simply holding the wolf’s corpse in his arms is an attainable feat, but the second half of the previous quote seems to suggest that that subject is reaching for life in death, an impossibility that many strive for. The author’s choice of diction, both complex and simplistic, conveys very precise and significant meanings that cannot be overlooked.

The syntax of the excerpt is extremely intricate, which helps to enhance the passage as a whole. The entire second paragraph (Lines: 15 – 30), is only separated into three sentences. The content of this paragraph simply walks the reader through the subject’s actions and fleeting emotions as he lays the wolf on the ground and begins to contemplate it. The lack of punctuation helps to perpetuate the sequence of events, but tends to have a busy, droning, almost lazy tone about them. Yet at this particular moment, “busy, droning and lazy” all reflect the subject’s actions and emotions. He was busy doing what had to be done (lighting a fire, washing away blood, cutting sticks for a trestlepole), completing each task in a monotonous manner, and getting ready to fall asleep. Therefore, the pace of the paragraph was ideal for the character’s present state.

At the beginning of the passage and right after the subject wakes up, the sentences are short and concise. These help to convey the subject’s blunt thought processes and actions. Such lines as “His trousers were stiff with blood” (Line: 4 and 5) and “He squatted over the wolf and touched her fur” (Line: 39 and 40) are both very short and to-the-point, but are significant nonetheless. Both promote the sense of death and the subject’s awareness of it. Near the end of the passage, the syntax becomes varied and inconsistent; some sentences have more than forty words, while others only have sixteen. This variation in structure seems to reflect the increasing confusion of the subject’s emotions, indicating that he is unable to fully comprehend just what he feels. In this particular piece, something as simple as the structure of sentences plays a major role in how the passage is interpreted.

The strong imagery of the piece, including tactile, aural, and visual, is one of its most prominent features. Tactile imagery is used in line 40 when the subject “touched the cold and perfect teeth” of the wolf. Both “cold” and “perfect” reflect deep emotions, “cold” representing that fact that the wolf was deceased, and “perfect” representing the carnage against something so flawless. Aural imagery is used in lines 51 to 53, which say: “Where she ran the cries of the coyotes clapped shut as if a door had closed upon them and all was fear and marvel”. This quotation conveys the sense of supremacy the wolf had and the respect her mere presence commanded. Visual imagery was used frequently, and was most specific. The subject bends over the wolf’s body and gazes into her eyes, and it is noted: “the eye to the fire gave back no light, and he closed it” (Lines: 40 and 41).

The lack of the fire’s reflection seems to mean that the “fire” of the wolf’s soul had burned out and by closing her lifeless eyes, the subject was paying his respects to her. After the subject performs this task, he then sits next to the wolf, places his and on her forehead, and closes his own eyes. He then imagines her running through the mountains. His reverie is full of intense visual imagery of mountains, starlight, the sun, animals that might have been the wolf’s prey, et cetera. All the places and things the subject imagines are nature-based and therefore eternal, since all in nature ultimately repeats itself. While in his trance, a change transpires within him. He is aware of it, but knows not what it is; just that it has power and magnitude. Hence, imagery was the main factor that begot the subject’s emotional alteration, as well as the aspect that helps to impress upon the reader how much the wolf’s death affected the subject.

The impact of the wolf’s death on the subject was blatantly significant, as denoted during the reading. Yet the author chose to convey that point in several ways other than content, which wholly improved the piece as well as made it more dramatic and profound. The author’s thoughtful usage of diction, syntax, and imagery promoted the story to a plane higher than that of other works of its kind. 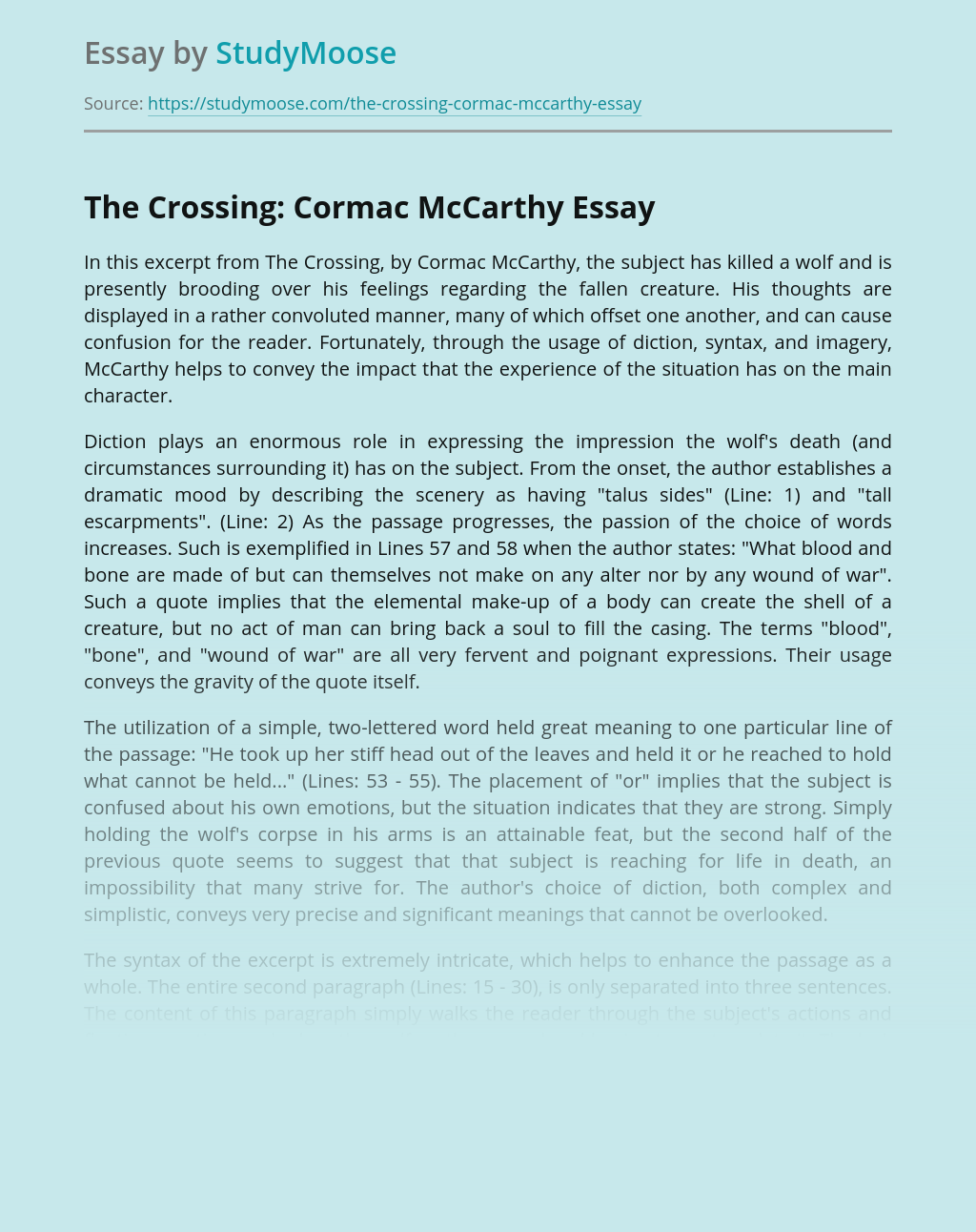 Goal setting is something most of us recognize as necessary for our success. The establishment of all objectives should be created using the S.M.A.R.T. philosophy. What is meant by S.M.A.R.T. objective? S.M.A.R.T. is an acronym that is used to guide the development of measurable goals. Each objective should be: Specific, Measurable, Achievable, Realistic and Timely...

1 Always low prices. Always. This is the slogan of the world’s largest corporation, a U.S.-based retailer whose big-box stores offer a one-stop shop, from groceries to garments to garden hoses. The secret of Walmart’s success is to give consumers the lowest prices-14 percent lower than its competitors (Greenhouse, 2003)-by increasing the efficiency of the...

Martha Coston was born in Baltimore in the year of 1826. She was left with four children to take care of after the death of her husband. This happened when she was only 21. Even though her husband was now gone she was determined to make money so she could raise her precious children. She...

The text under analysis is named The Dinner Party, written by Nicholas Monsarrat. Monsarrat is a British novelist known for his sea stories and his novels, The Tribe That Lost Its Head and its sequel, Richer Than All His Tribe. The Dinner Party is a piece of narration. It tells us about a rich man...