In “The Crisis, No. 1,” an article written by Thomas Paine in 1776, there are many literary tools. This Article speaks of how the colonists need to stand up and fight for themselves against Britain and gain their independence. Three forms of language that Paine uses in order to convince the colonists that this is necessary were pathos, diction, and logos. The most prevalent literary tool, also form of rhetoric in this document was Pathos as Paine uses a lot of emotion to connect with his target audience.

Don’t waste time
Get a verified writer to help you with “The Crisis, NO. 1” Thomas Paine Literary Tools
Hire verified writer
$35.80 for a 2-page paper

“I call not upon a few, but upon all; not on this state or that state, but on every state,” shows how he uses pathos to arouse a feeling of patriotism or unity. Paine obviously tries to connect with the audience through feelings of connection with each member of their society. He also often uses the word “we” to show how he is just one of them, another simple colonist who wants to break free from Britain.

He ensues fear in the colonists through God, the devil, and how they would be slaves if the British kept ruling over them.

Paine says that if they kept acting so naive then the British would come over and kill them. Another obvious literary tool that Paine uses is diction. He uses many thought provoking words that allow people to think more about the topic at hand. “… suffer the misery of devils…” represents a form of Paine’s diction. The word misery evokes great emotion in regular people as they could have been through some form of misery, such as being under control of Britain, giving them a greater understanding of the word.

To go even further, it being the “misery of devils” makes it an even greater misery and more disturbing to the public, giving them thoughts of what a devil’s true misery might be. The use of the word “suffer” in this quote, as well, brings even greater understanding and fear as it is a harsh word. All of these words together bring a jarring tone of misery, giving great emotion and feeling to the colonists. The final and least evident literary structure Paine uses in this document is logos as there are few forms of logic.

Throughout the writing, there are a few times where Paine uses actual reason over emotions, but enough times that it stimulates thought on the colonists’ part. “We did not make a proper use of last winter, neither could we, while we were in a dependent state. However, the fault, if it were one, was all our own; We have none to blame but ourselves,” shows Paine’s thoughts on an actual problem that happened. He speaks about how it was the colonists, including his own, fault for what happened, no one elses, stating the blunt truth.

This makes the colonists think and recount on what they have done and what they can do to fix it. Overall, Paine uses many literary forms in this document, allowing the colonists to think more about what they should do, and evoking emotions of disgust and hatred toward Britain. This article pushed the colonists more toward wanting to be free of Britain and to not be slaves to them. They wanted to break away and gain their independence more due to this document and Paine’s way of writing this. Al of the language he uses, from pathos to diction and to logos, Paine ensued hope into the colonists for a better, more free future. 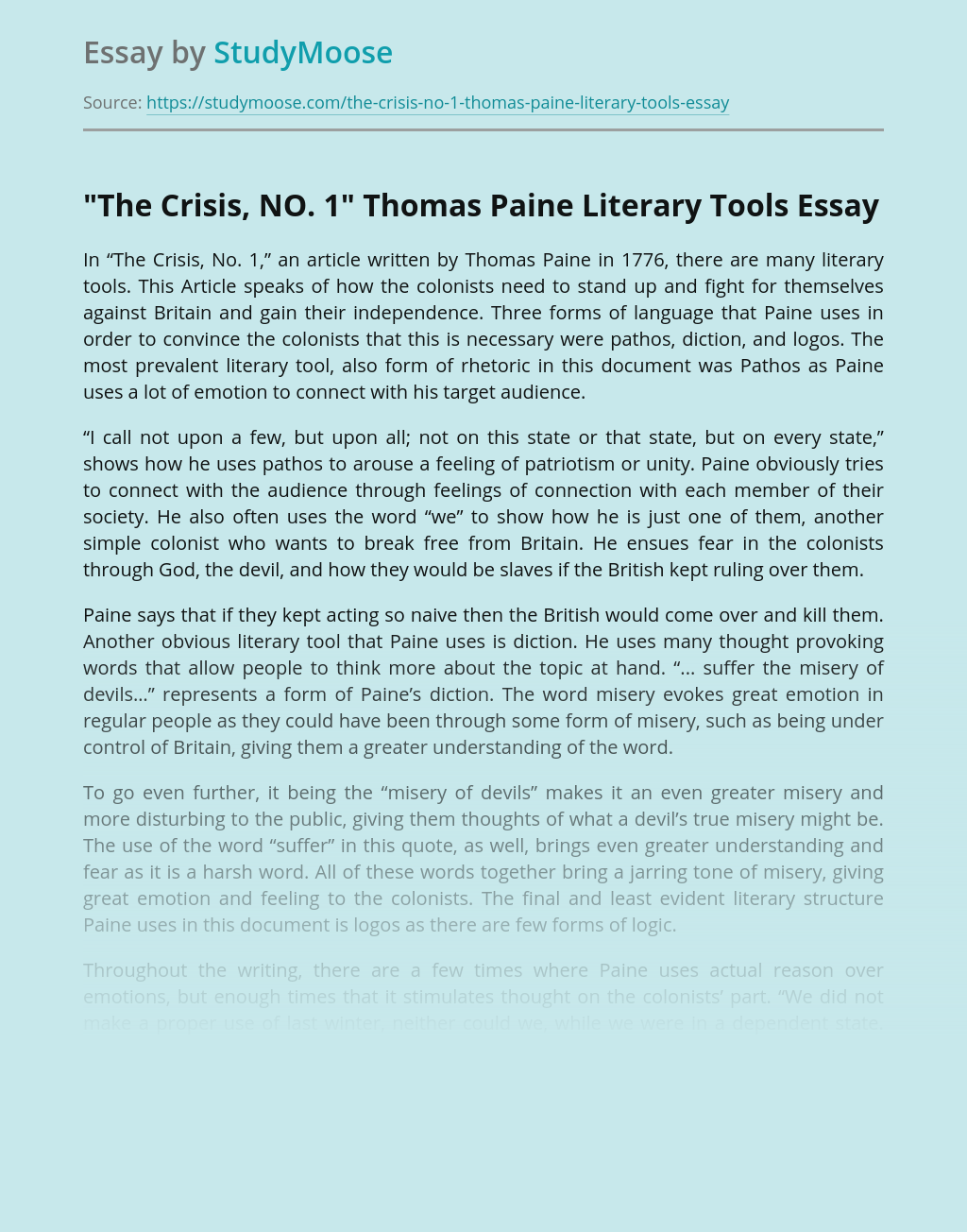 Don’t waste time
Get a verified writer to help you with “The Crisis, NO. 1” Thomas Paine Literary Tools
Hire verified writer
$35.80 for a 2-page paper
Stay Safe, Stay Original