The Costs and Consequences of Gun Control

The demand for self-defense is on a high rise, especially in the nonmilitary accessible zone like the campus. People need to be taught about protecting themselves from potential harms and also from assaults of any form in the campus. The argument on allowing concealed weapons on campus by college students, professors, and other college employees has not been properly dealt with. We could judge with common sense that allowing concealed weapons on campus will only make the problem worse and not better.

Don't use plagiarized sources. Get your custom essay on
“ The Costs and Consequences of Gun Control ”
Get custom paper
NEW! smart matching with writer

Therefore, concealed weapon should not be allowed on campus.

There has been a sharp rise in students that considered suicide as the only option while going through stress and other psychological issues such as emotional trauma, anxiousness, mood swing and fear. In most cases students that are slow learners studying courses considered to be too tedious for them may see suicide as the only option to quit, especially if they are new on campus. Giving such innocent students access to a weapon will not only endanger them, but will also make them a threat to each other.

Having firearms around makes gun crime likely to occur. It was Jon Schuppe that report about a research carried out by John Hopkins Group of researchers showing that most fatal mass shootings occurs in places where guns are authorized and that the people with guns were not able to stop this very act of violence. This is actually common everywhere if not all the campus where concealed weapons have been authorized even if the news of violence has not submerged to the attention of the masses.

We could tell that all is not well; because someone who does not have the courage may find it difficult to report a fellow student to the appropriate authority. According to the National Conference of State Legislatures 16 states banned the carrying of a concealed weapons on a college campus and 23 states left the decision to ban or to allow concealed weapons on campuses to be made by each college or university individually (National Conference of State Legislatures). Sincerely speaking, violence may likely occur in these zones.

Furthermore, the majority of students on campus during their first year of studies are between the age of 18 and 22. This age is recognized worldwide as a responsibility age. Most students at this time of their life tend to hang around with friends in parties, and also want to get high with alcohol. This could lead to self harm when taking excessively, especially by those with concealed weapons. It is like an officer that left his duty post to take alcohol and took more than he could handle, and was called to attend to ongoing attacks under such a state. He could pull the trigger but if he does; he might end up killing innocent Americans. If the police officer would do that, then a student could do worse.

In conclusion, the more guns and other weapons are made available to the campus environment, the higher the risk of assaults and violence on students, professors and to other college staff. We should always keep in mind that concealed weapons are dangerous to life. There is need to learn, because, the more we learn the better we will be able to protect ourselves from firearms and assaults on campus and the dangers of having them on campus.

The Costs and Consequences of Gun Control. (2020, Nov 18). Retrieved from http://studymoose.com/the-costs-and-consequences-of-gun-control-essay 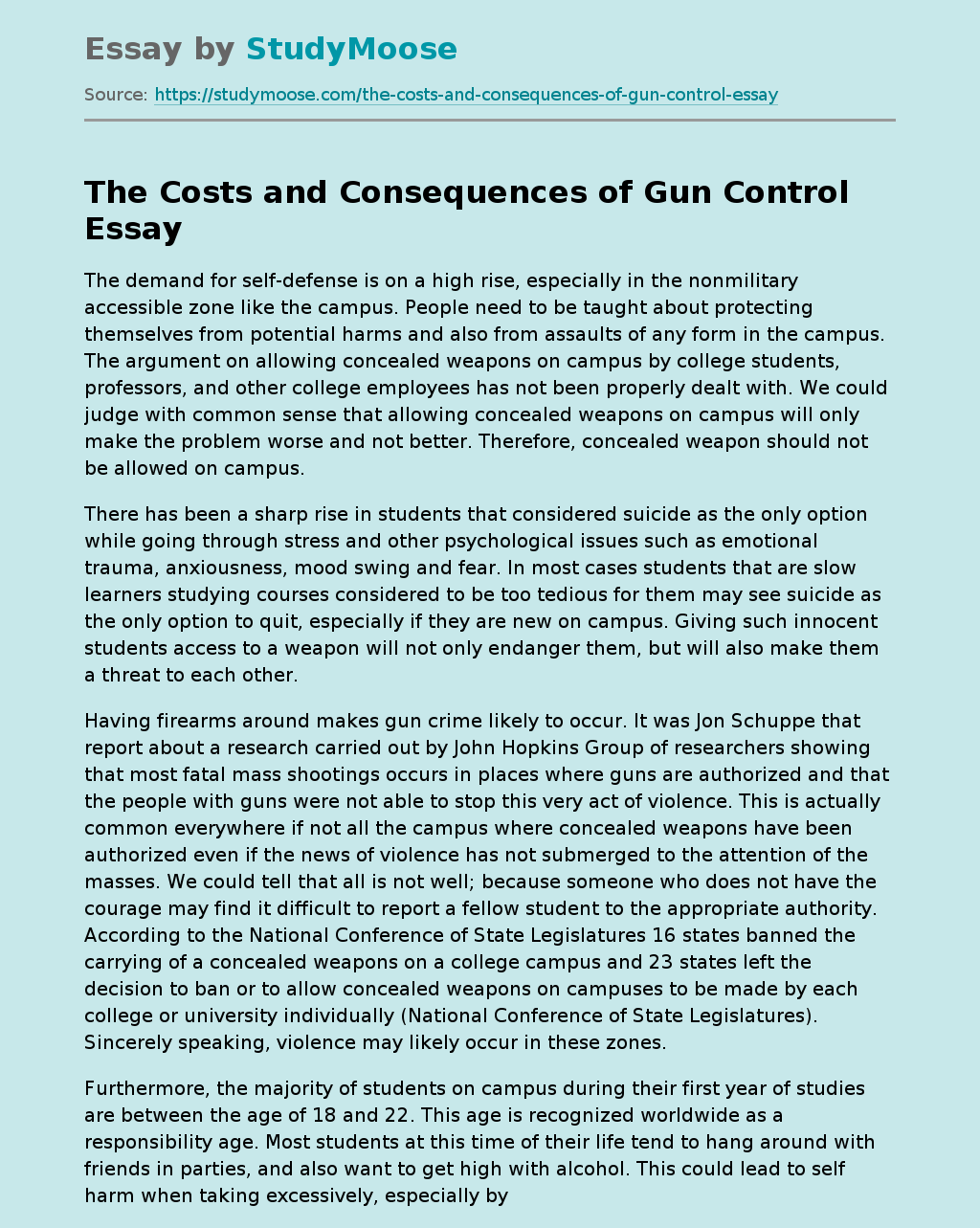