The Controversies of Organic Foods

It is a very popular saying that “You are what you eat”. In today’s food markets, organic foods are everywhere. Not only are there organic fruits and vegetables, but there are also organic dairy products, organic meats, organic convenience foods, organic wine, beer, coffee, tea and even clothes made with organic cotton. All these choices have made organic foods the “fastest-growing segment of the grocery industry. Approximately two percent of the U.S. food supply is grown using organic methods.

Don't use plagiarized sources. Get your custom essay on
“ The Controversies of Organic Foods ”
Get custom paper
NEW! smart matching with writer

Organic foods may have higher nutritional value than conventional food, according to some research. In the absence of pesticides and fertilizers, plants boost their production of the phytochemicals (vitamins and antioxidants) that strengthen their resistance to bugs and weeds. Some studies have linked pesticides in our food to everything from headaches to cancer to birth defects — but many experts maintain that the levels in conventional food are safe for most healthy adults. Even low-level pesticide exposure, however, can be significantly more toxic for fetuses and children and for pregnant women according to a report by the National Academy of Sciences.

Pesticide contamination isn’t as much of a concern in meats and dairy products, but many scientists are concerned about the antibiotics being given to most farm animals: Many are the same antibiotics humans rely on, and overuse of these drugs has already enabled bacteria to develop resistance to them, rendering them less effective in fighting infection, says Chuck Benbrook, Ph.D., chief scientist at the Organic Center, a nonprofit research organization.

Technological innovation and influx of scientific breakthroughs have led to changes in our ways of lives. In the process, of keeping up with modernism, there have been a preponderance of unnecessary innovation which more often constitute danger to human every day existence. One of such is a noticeable increasing trend in the world population necessitating the implementation of strategies to increase food accessibility. At the same time, there is an increase in the severity of crop diseases and land fragmentation. As a result, farmers are preferring growing the genetically modified plants due to their resistance to pest and their ability to guarantee high yields. There are recent debates on the health effects associated with the consumption of GM foods. Proponents argue that GM foods contain improved characteristics and enhanced nutritional value. The truth is genetically modified foods have profound health effects. Importantly, GM foods lead to the development of allergies, cancers and liver failure.

Genetically modified foods have unpredicted amounts of toxins. Scientist reveals evidence of the possibility of accidental and unexpected changes in GM foods. GM foods are found to contain higher than the average levels of toxins in plants. Similarly, genetic modification increases the tendency of plants to obtain toxins from the environment including heavy metals and pesticides (Ladics 590). As a result, genetically modified foods may introduce new types of toxins to the body. The introduction of excess toxins to the human body increases the probability of developing liver complications including inflammation, damage and liver failure. Similarly, toxins have profound impacts on mothers during pregnancy. Toxins lead to the birth of underweight babies and other reproductive failures. Toxicants lead to high mortality rates among children (Landrigan 569). Excess toxins in the body also causes depression, sleep problems, Psoriasis, menstrual disorders, water retention, heartburn, constipation, bloating, joint pain, sinus congestion, canker sores, and premenstrual syndrome.

The genetically modified foods are produced using high amounts of herbicides, and such foods increase health risks including cancers. A high number of genetically modified foods are tolerant to herbicides. Therefore, farmers are likely to use herbicides for weed control compared to mechanical methods. Research has revealed the presence of glyphosate, an active ingredient in Roundup among patients suffering from congenital disabilities, endocrine disorders, cancer and Parkinson’s disease (Landrigan et al. 694). Moreover, Glyphosate makes essential minerals inassimilable. It is, therefore the key cause to most of the ailments that have a linkage with the western diet including obesity, diabetes, heart diseases and gastrointestinal disorders.

Genetically modified foods can lead to increased medical resistance. Genetic engineering allows the production of foods with medical benefits to consumers. The truth is these kinds of foods may also lead to unintended consequences. The introduction of the foods containing medical benefits to the human body triggers bacteria populations to develop adaptations for survival (Ladics 589). Therefore, with time the medicinal qualities in the genetically modified plants become ineffective. Vitally, the bacterium populations develop resistance to conventional medicines leading to increased vulnerability to diseases among the users of genetically modified foods.

Despite the above arguments on the shortcomings of the consumption of GM foods, proponents argue that genetically produced foods have improved nutritional components that are vital to individual health. For instance, genetically modified maize contains added contents including vitamin C (Zhang et al. 5). Similarly, potatoes have added calcium content, and rice has additional elements of iron and zinc. Still, there are arguments that genetically modified foods have reduced contents of undesirable elements. For instance, genetic engineering has contributed to a reduced amount of caffeine coffee beans. Other ideas by the proponents of GM foods include that they look attractive and they contribute to healthy eating habits.

Overall, how food is grown and cultivated can impact a family’s health as well as their environment. The consciousness of the impact that food and drink can have on a person’s health has increased in the past few years and this has brought organic food to the forefront of healthy choices for both parents and kids alike. Organic food is also a better choice for the environment as well. Organic farming practices reduce pollution in the air, water, and soil. It also helps conserve water, reduce soil erosion, and uses less energy. “Organic products are the best from nature, and the best for nature,” Dr. Bruengel shared. “These products take into consideration not just production but environmental sustainability as well. “However, not all products that claim to be organic truly meet strict organic regulations. To be organic, crops must be grown in safe soil that is free from pesticides and other harmful chemicals. Organic food is also a better choice for the environment as well.

Organic farming practices reduce pollution in the air, water, and soil. It also helps conserve water, reduce soil erosion, and uses less energy. “Organic products are the best from nature, and the best for nature,” Dr. Bruengel shared. “These products take into consideration not just production but environmental sustainability as well. However, not all products that claim to be organic truly meet strict organic regulations. To be organic, crops must be grown in safe soil that is free from pesticides and other harmful chemicals. the cost of the consumption of genetically modified foods outweighs the associated benefits. The proponents of GM foods present unconvincing arguments since individuals can attain the required nutritional requirements by consuming different types of foods. Similarly, public education on nutrition would lead to the willingness by the masses to consume dietary foods such that individuals will not choose foods merely because of their attractiveness.

By contrast, the arguments against the consumption of GM foods reveals outstanding issues. Above all, GM foods may lead to irreversible health consequences. Some of which is proclivity to resistance to medication. When organs in the body resist medications meant for the healing of ailments, it could spell an ominous sign of fatality which can lead to not only early but also sudden death. This increases human woes in no uncertain measure and consequences. More so, the use of genetically modified foods increases the risk of developing more than one health complication. This is because it leads to a variety of diseases including cancer, liver failure, cardiac arrest, fatigue, and complicated allergies. This is to mention but a few.

The Controversies of Organic Foods. (2020, Nov 12). Retrieved from http://studymoose.com/the-controversies-of-organic-foods-essay 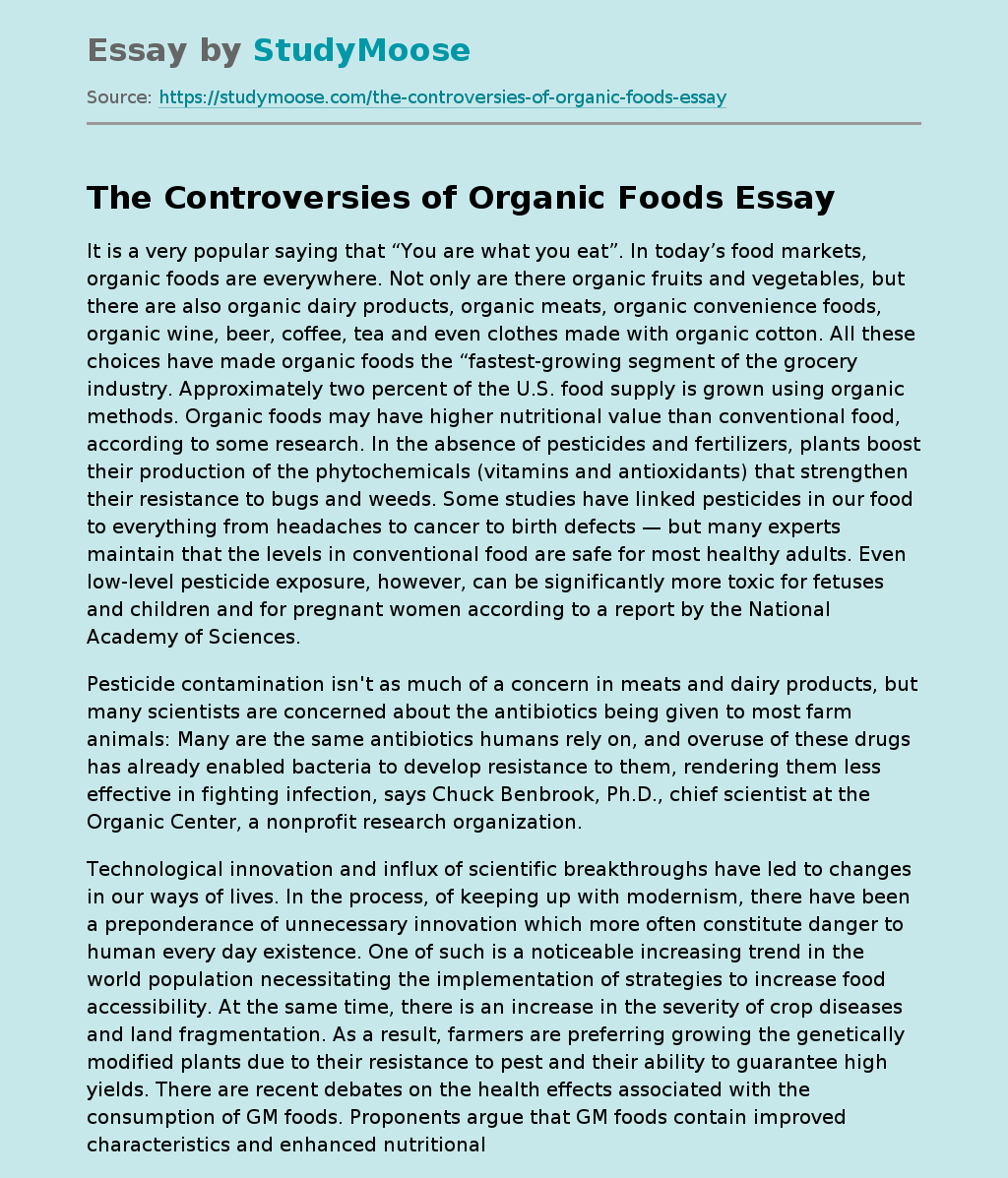