A Conceptual Framework of Accounting

Turn in your highest-quality paper
Get a qualified writer to help you with
“ A Conceptual Framework of Accounting ”
Get high-quality paper
NEW! AI matching with writers

Further, to make the system consistent we need to agree on how we define, recognise and measure the elements of that system. The view taken is that there are a number of building blocks involved in developing a logical system of accounting and that a conceptual framework develops such building blocks in a logical order.

Without some consensus on issues such as those mentioned above, it is likely that the development of rules of accounting (assuming that we need rules) will be undertaken in a rather piecemeal manner with limited consistency between the various rules (which raises another issue: do we need consistency?).

This inconsistency appeared to be the case in many countries prior to the development of conceptual frameworks. There was a great deal of inconsistency between the various standards in terms of definitions (often implied) of the elements of accounting, as well as inconsistencies in determining when the elements should be recognised and how they should be measured. With a conceptual framework, the accounting standards are expected to be more consistent.

Across time, the accounting profession attracted a great deal of criticism for the lack of agreement on key issues—so from a ‘legitimacy’ perspective, the profession probably needed a conceptual framework.

Some of the advantages that have been advanced in relation to conceptual frameworks of accounting include:

Accounting standards developed by applying the contents of a conceptual framework should be consistent and logical. Because many countries have developed conceptual frameworks that are similar (or they have adopted the IASC framework) there should be greater international compatibility between various countries’ accounting rules, and this should lead to greater consistency and comparability between international financial reports (which some people have argued is important for flows of foreign investment capital). Because conceptual frameworks provide the fundamentals of an accounting system, standard-setters should be more accountable for their decisions.

If they deviate from key issues addressed in a conceptual framework this should be clear and some explanation would be necessary. Conceptual frameworks provide a means of communicating key concepts to financial report preparers and users, as well as providing guidance to reporting entities when no specific standards address a particular issue. Because issues such as the objective of financial reporting, recognition criteria (and so on) have been determined when developing a conceptual framework, then accounting standard-setters will be subject to less political pressure when developing new standards. Because standard-setters will have consensus on many key issues, the development of accounting standards should be more economical. There will be no need to go back to the ‘drawing board’ on many fundamental issues.

Some of the disadvantages that have been associated with conceptual frameworks of accounting include:

Conceptual frameworks focus on economic (financial) performance alone. As such, they tend to ignore other aspects of performance (for example, the social and environmental performance of a reporting entity). Further, by focusing on financial performance alone and by giving it prominence, conceptual frameworks tend to deflect attention away from other important areas of corporate performance. They represent a codification of existing practice and do not provide ideal methods of accounting. They only act to provide a means of legitimising a profession under threat.

Whether we accept or reject the above advantages or disadvantages of conceptual frameworks will really be based on our own personal opinions and beliefs.

A Conceptual Framework of Accounting. (2016, Aug 26). Retrieved from http://studymoose.com/a-conceptual-framework-of-accounting-essay 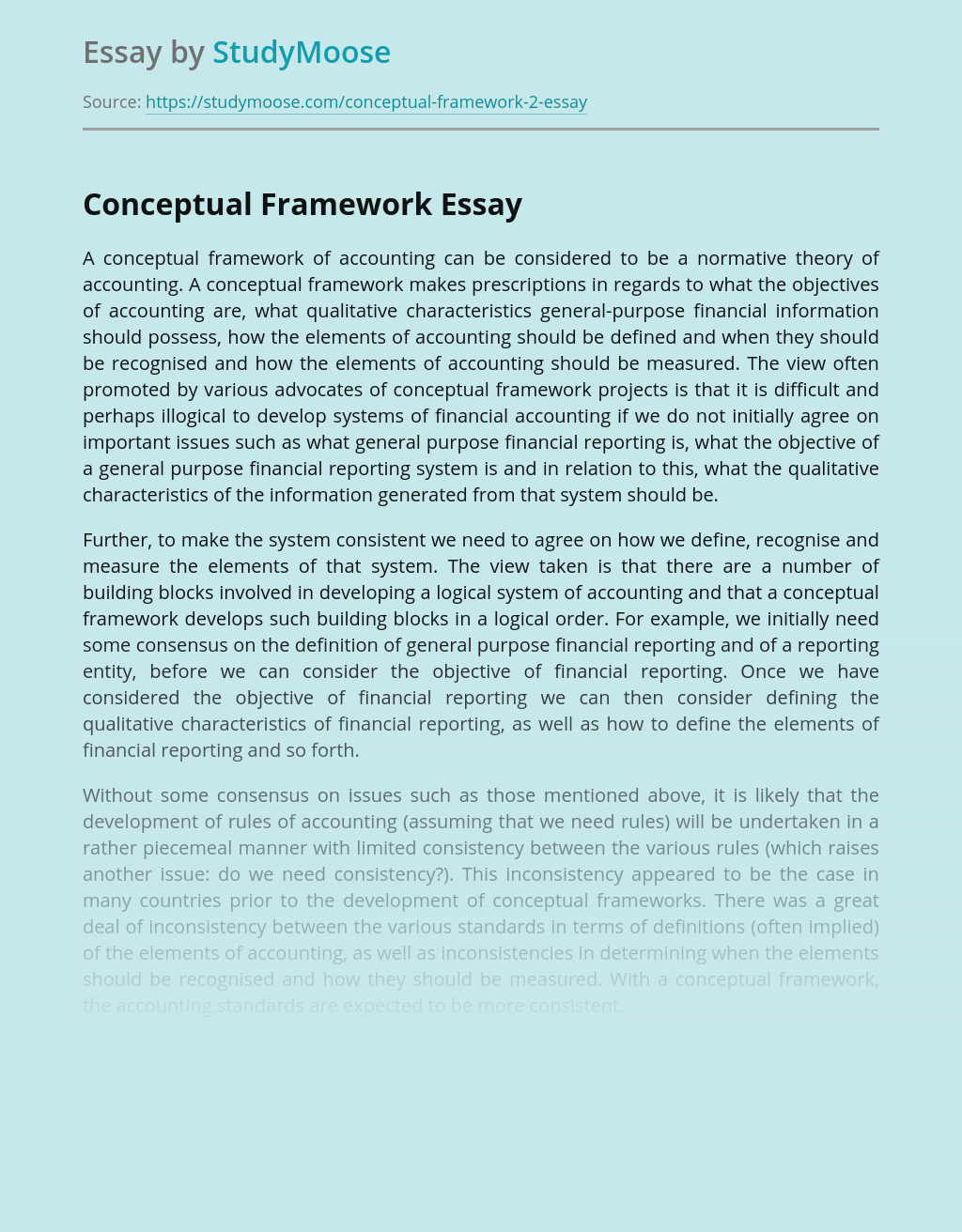 Turn in your highest-quality paper
Get a qualified writer to help you with
“ A Conceptual Framework of Accounting ”
Get high-quality paper
Helping students since 2015
Stay Safe, Stay Original