For years, there has been a debate on how food is grown. Should it be organic or conventionally grown? To answer this question, the difference between the two needs to be known. Organic produce is grown without chemical fertilizers and pesticides. Organic livestock is free ranged, most of the time, with no added antibiotics or growth hormones. Conventionally grown produce is usually processed after being harvested. They are also sprayed with chemical pesticides and enriched with polluting fertilizers.

Stanford University has held over 250 investigations that compared the nutritional value of organic and traditional crops.

Don't use plagiarized sources. Get your custom essay on
“ Organic vs. Conventional Foods ”
Get custom paper
NEW! smart matching with writer

These studies show that organic foods tend to contain slightly more phosphorous, a higher level of omega­3 fatty acids, and a 30% lower rate of chemical residue. However, traditional chicken and pork is one­third more likely to contain antibiotic bacteria than organic meats. Bacterias that cause food poisoning are equally present in both traditional and organic. They have little difference in nutritional value.

” Organic products can still be labeled as organic, even if they contain commercial pesticides. The U.S. Department of Agriculture stated that almost 20% of organic lettuce showed up as positive for containing a pesticide  called spinosad. Spinosad comes from a naturally occurring bacterium in soil. Although it is considered slightly toxic to the EPA (Environmental Protection Agency), it can be used while farming and still be labeled as organic. Spinosad, under the name Entrust, is especially harmful to the nervous system of insects, and small marine life, like mollusks.

Spinosad, as well as compounds made of natural elements like sulfur and copper, have made it onto a list of pesticides open for use on organic crops, which you can find on the USDA website. Organic farming became popular in the 1970s when the first pesticides and fertilizers were introduced. The effects of the chemicals they contained were soon noticed. The chemicals paralyzed the nervous system of many people. People became concerned with what they were consuming.

Organic produce may have a longer storage time and lower input costs, but there is more bad that comes out of it than there is good. Organic crops have a longer growing time. Organic farming also requires more skill than needed for traditional farming and has higher risks of soil erosion.

Despite the disadvantages, organic farming is more popular than ever. Organic products tend to have a more natural taste, and is believed to decrease the risk of the avian flu.

Since organic farming is becoming so popular, traditional farming is beginning to be frowned upon. It is believed to be highly dangerous and an environmental risk. However, that is not the case. Conventional farmers are starting to focus on soil fertility techniques, such as crop rotation and composting. Although some farmers still use chemical based fertilizers, herbicides, and pesticides, others have switched to fertilizers, herbicides, and  pesticides with little to no chemicals.

Conventional farms can produce more crops per acre, replenish soil, decrease risk and topsoil erosion. Conventional farming is also cheaper and require less skill. The amount problems with conventional farming have risen over the years. These problems are becoming more serious. Droughts are a big problem when it comes to traditional farming. Crops rely on rainfall to live and grow properly. If a drought occurs, it is very likely for starvation in a community to happen. Also, crops must be sprayed with the right amount of pesticide or herbicide. If not given the right amount, crops, runoff, and local water sources can be contaminated. Suicide within the conventional farming community is also a very common thing. Since 2009, over 200,000 Indian farmers have committed suicide due to debts they could not pay off. The decreased sea levels and organic competition is the cause of their lowering profit.

The prices of organic products tend to be around three to four dollars more than regular produce and meat. Say you were at the grocery store. Your grocery list contained bread, a dozen eggs, and a half gallon of milk. If you were to buy these things as conventional products, it would cost around $7. However, organic versions of these products would cost about $11.50. Organic products, such as milk, eggs, or chicken, can cost up to five dollars more than conventional products.

Which Should I Buy?

Every year, the Environmental Working Group (EWG) releases two official lists of the crops with the most and least amounts of chemical residues. These lists are called the “Clean 15” and the “Dirty Dozen.” As of 2015, the crops that made the Clean 15 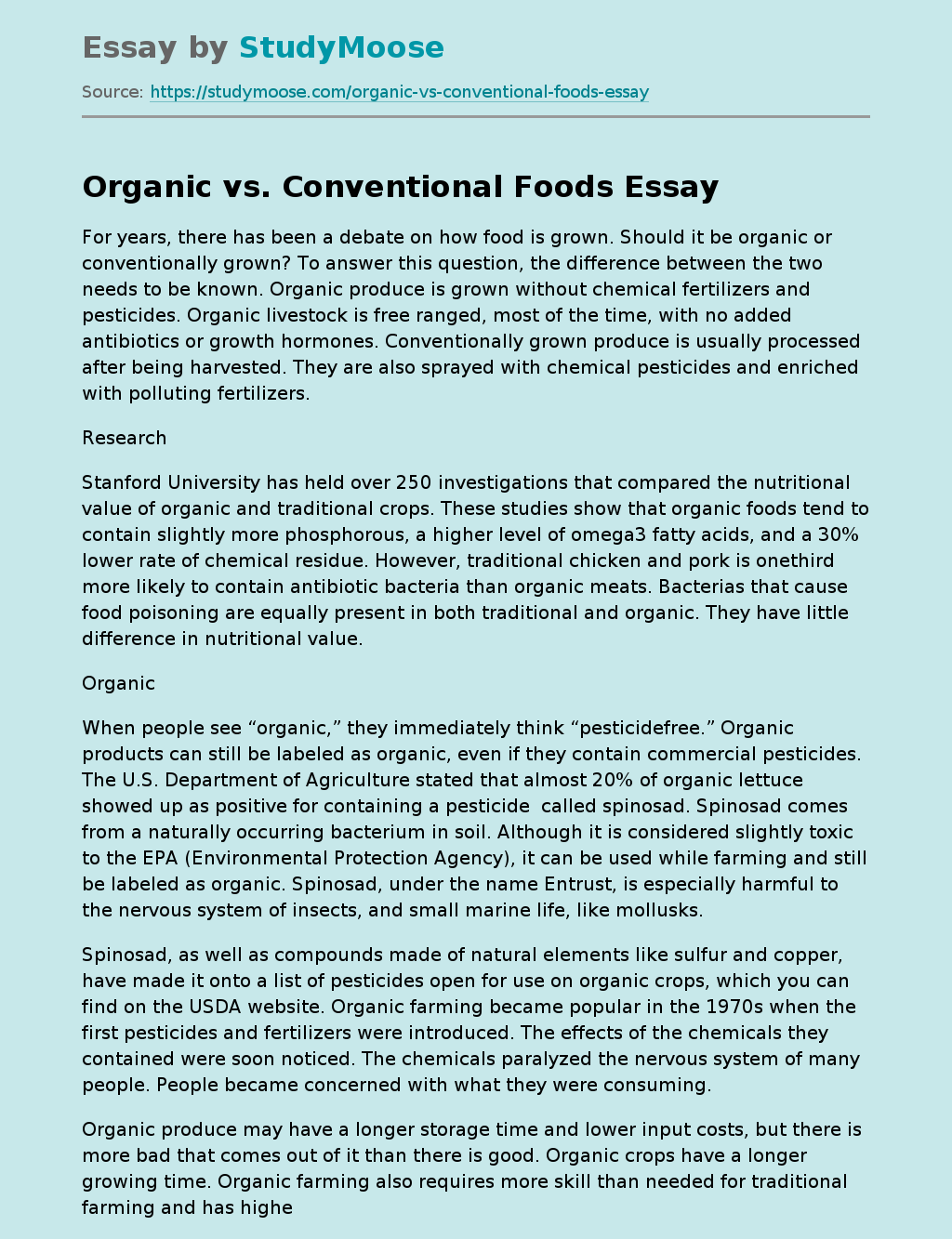