The Constitution: The Barrier Against Tyranny

Aren’t you glad that we ruled by a dictator. That is all thanks to the United States Constitution. In 1787, 55 delegates all met in Philadelphia to fix the articles of confederation. The articles of confederation had many things wrong with it. It didn’t place one person as chief executive. This was due to the fact that the states were afraid of one person having so much power like the tyrant from Britain. They also made it so that to make a change to a law there had to be nine out of the thirteen states in total agreement.

Don't use plagiarized sources. Get your custom essay on
“ The Constitution: The Barrier Against Tyranny ”
Get custom paper
NEW! smart matching with writer

One big components that helped guard against tyranny was Federalism. Federalism is the federal principle of government. Federalists are people against the fact of tyranny. In Document A James Madison writes “In the compound republic of America, the power surrendered by the people is first divided between two distinct governments, and the portion allotted to each subdivided among distinct and separate departments.

” This thought that power should be divided between central and state governments is Federalism. Federalism was a guard against tyranny because it divides power between the two governments that would control different things yet not all the power.

Another guard against tyranny was separation of powers. This means that the government would be separated into three branches. These branches are the legislative branch, executive branch, and the judicial branch.

The legislative branch is run by Congress. The executive branch is run by the President of the United States. The judicial branch is run by people that have been appointed by the President. In Document B James Madison writes “The accumulation of all powers, legislative, executive, and judicial, in the same hands, whether of one, a few, or many, and whether hereditary, self-appointed, or elective, may be justly pronounced the very definition of tyranny…. (L)iberty requires that the three great departments of power should be separate and distinct.” James Madison is saying that there is separation of powers then tyranny should not be a problem. Separation of powers works so well because there is not one branch that could abuse its power. Each branch must consult with the other.

Another great guard against tyranny is checks and balances. Checks and Balances guaranty that one branch does not overstep and get close to tyranny. In the graph in Document C we can see that each branch has some rule over the others. The legislative branch could override a President’s veto. The executive branch could nominate judges to be a part of the judicial branch. The judicial branch could declare laws unconstitutional. With each branch having other powers over the others. This is to prevent tyranny. In Document C James Madison also writes “(The three branches) should not be so far separated as to have no constitutional control over each other.”. With this we know that Madison means that without the help of checks and balances the power would be unbalanced and one branch could become a tyrant.

The Constitution: The Barrier Against Tyranny. (2020, Sep 05). Retrieved from https://studymoose.com/the-constitution-the-barrier-against-tyranny-essay 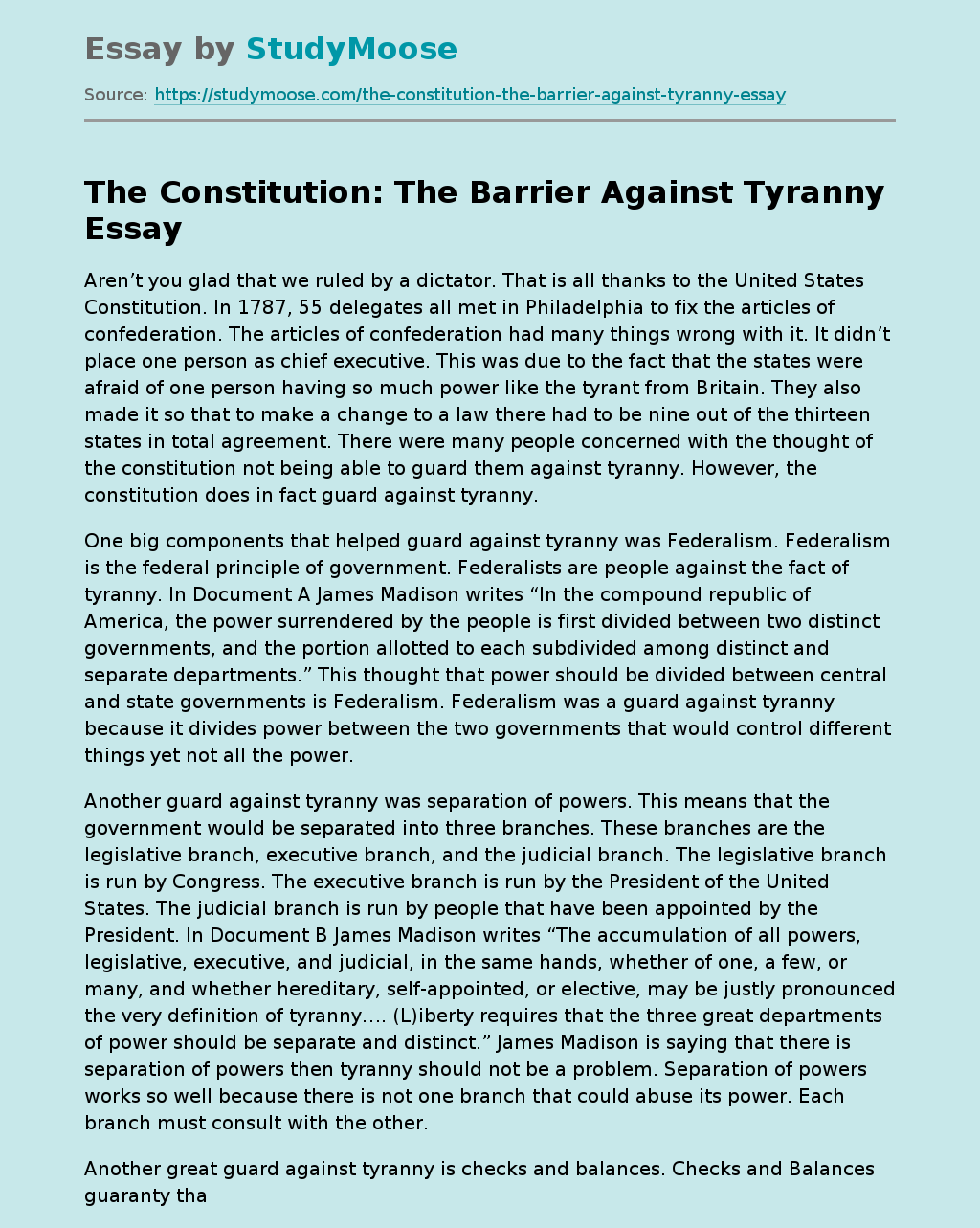