"The Child By Tiger" By Thomas Wolfe

“Insane Slave Murders Citizens!” The headlines would boldly exclaim this phrase if an event such as that happened today. The central event of the plot is a violent action in “The Child by Tiger” by Thomas Wolfe. The author gives significance to the occurrence by making it reveal a general truth about human experience. This universal theme becomes evident through many aspects of the story, which can be analyzed and evaluated to discern their purpose. These following paragraphs will support the judgement that a person in general can contain two worlds inside their psyche: good and evil.

Don't use plagiarized sources. Get your custom essay on
“ “The Child By Tiger” By Thomas Wolfe ”
Get custom paper
NEW! smart matching with writer

If the balance of these two is upset, tremendous or horrible things can happen. When “The Child by Tiger” first begins, Dick Prosser is established as a well-rounded, almost perfect individual. Although he is a slave, that doesn’t restrict his amazing talents and abilities. As the story progresses, however, a stark contrast becomes evident in Dick Prosser’s presence. The first indication of the revelation of an underlying theme is the shroud of mystery veiled over Dick Prosser.

For example, in the first few pages of this story, a character named Pansy Harris is introduced. She is portrayed as a jovial, good-hearted, Negro woman that assists with the kitchen duties in her owners’ home.

Her disposition quickly changes to quiet and somewhat mournful upon encountering Dick Prosser. She informs her host family that she is leaving, which seems as if her departure is without any reason whatsoever. Secondly, a dark, enigmatic presence surrounded the narrator when he would see Dick.

The narrator (once referred to as Mr. Spangler) speaks of the red in Dick’s eyes whenever Dick would emerge from his living quarters. This was presumed to be an “intoxication of the spirit” because Dick was a godly man. The appearance of the worn-out Bible on his table was evidence that the book had been used often. Spangler often refers to Dick’s cat-like abilities to sneak up on people, which deeply troubled him. Dick’s moaning of hymns and another aspect pertaining to the Bible frightened the narrator. Dick would sometimes put together a “weird jargon” of Biblical phrases, perhaps constructing his own meaning of the passages. Obviously, the author is trying to create a direct contradiction to Dick’s previous character. The significant violent action becomes almost predictable with the next few events. On Saturday a little after eight in the evening, the narrator along with the Shepperton boy noticed Dick’s door to his basement room was slightly open.

They entered and found a rifle with ammunition lying on the small table is Dick’s perfectly tidy lodging. Dick crept upon the boys “like a cat”, his red eyes glaring. This incident frightened the boys. While everyone in the town was asleep that night, Dick was not. The town bell rang, awaking Spangler in the process. When the narrator had heard that a Negro man had murdered several people, he knew immediately that it was Dick Prosser. Earlier that evening, Dick had been at Pansy’s home. Her husband came home, drank with Dick for a short while, then proceeded to fight with him. Pansy’s husband was killed. Perhaps it was out of jealousy or a conspiracy between Pansy and Dick; nonetheless, Dick murdered him. This initiated Dick’s “killing spree”. He murdered men because they posed a threat to Pansy, first; then because people were a danger to him. What was the purpose of the strange chronological structure? It was very interesting how the author used a different sequence of order in telling this story.

The whole story is a twenty-five year flashback, yet to recount the actual events that happened the night of the murders, Wolfe returns to the present time. What importance does this removal in time have for the meaning of the story? It is evident that the removal in time of the narrator has had an effect on him. He could take time to put things into perspective and delve beyond the surface to contemplate the Dick’s true motives. Even during the time period that the incidence occurred, Spangler understood the mentality of the people. He said, ” For we would still remember the old dark doubt and loathing of our kind, of something hateful and unspeakable in the souls of men. We knew that we should not forget.” What was the intent of Wolfe to constantly mention the Army? How was that pertinent to Dick’s actions and behavior? There were several references in the story to Dick’s affiliation with the Army. A great example is paragraph 102 on page 36 which states, ” as if he were seated on his cot in an Army barracks, he unlaced his shoes, ………….stood up like a soldier….”

What was the significance of this event, especially when Dick was a mere ten yards away from freedom? It symbolized submission to fate. All humans are subject to some sort of fate, and Dick believed that his destiny was of a Biblical nature. Perhaps he would rather die willingly than to be hunted down by the police for the rest of his life. How Dick readily gave up contrasted to the way that the whites treated his body. He knew that he was subject to fate, yet the whites completely destroyed his body with almost 300 shots. Also, verse four of the psalm on page 38 explains the significance of Dick taking off his shoes. It states that “thou art with me”. Dick might have misconstrued Bible passages.

Perhaps something clicked in his head and made him recall bits of his previous character: the good Dick Prosser. Are voices of reason always drowned out by a mob? Hugh McNair’s voice was certainly ignored. A minor character, Hugh desperately tried to persuade the mob to go by law, order, and justice. They completely disregarded the righteous things that he said, and proceeded to throw a brick in his direction. Hence, it is apparent that there were others who saw the unjust attitude of the townspeople besides the narrator and the other boys. These paragraphs have supported the judgement that a person in general can contain two worlds inside their psyche: good and evil.

If the balance of these two is upset, tremendous or horrible things can happen. In this case it was the latter. Conceivably, things could have turned out different for Mr. Dick Prosser had he been brought up in a different community. Subtract the potential for racism, prejudice, discrimination, and Dick might have been another star football player or the highest-ranking officer in the military. The possibilities could be endless if one would disregard their limitations.

"The Child By Tiger" By Thomas Wolfe. (2016, Jun 19). Retrieved from http://studymoose.com/the-child-by-tiger-by-thomas-wolfe-essay 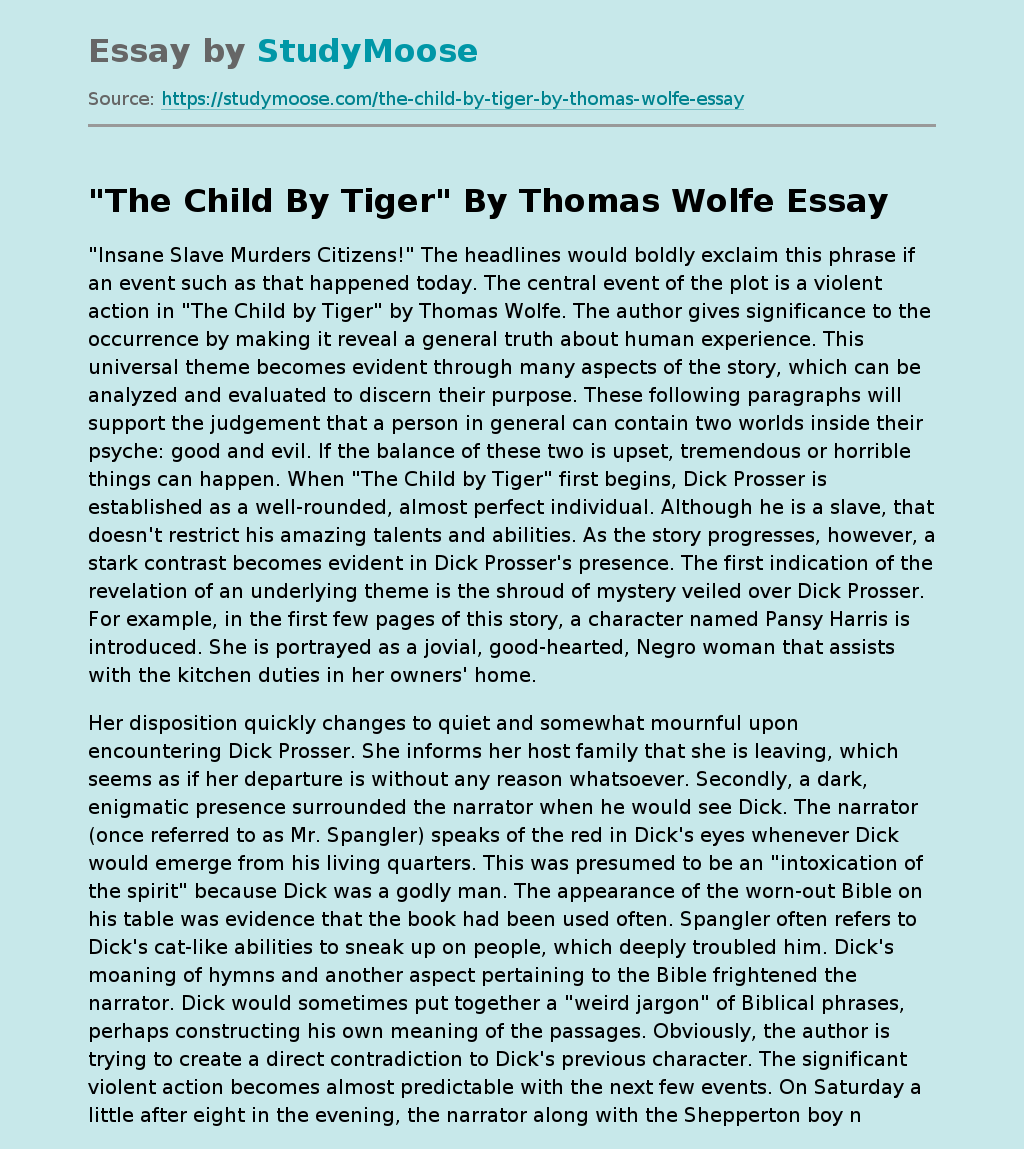