Prosser contributed much, not only for African Americans, but also to the field of psychology through research. This journey takes you through her childhood, her desires, and her struggles while striving to achieve her goals and recognition. What is at the end of this journey is a legacy which has given hope and aspirations for many past, present and future generations.

Inez Beverly Prosser Twentieth Century African American Psychologist 20th Century Education in Psychology – The Matter of Gender In the early twentieth century, the composition of psychologists was predominantly Caucasian males. Caucasian females at that time were more and more given the opportunity to attend college and teach within those colleges. However, those same women continued to encounter resistance to the opportunity for obtaining a degree in psychology. One such renowned female of that period was Mary Whiton Calkins (1863 – 1930). Calkins applied to study at Harvard University, but at the time, Harvard did not permit women admittance.

Through letters, petitions, protest, and insistence by prominent  within the educational system, Calkins was finally allowed to study at Harvard under the conditions that she attends as an unregistered student. By 1894, Calkins had completed all of the requirements for earning a doctorate in Psychology.

Although Calkins was never officially conferred the doctoral degree, she is regarded, by many, as being the first woman to have rightfully earned this honor. 20th Century Education for Psychology – The Matter of Racism Though Calkins had paved the way for the female gender to have the same rights and recognition as her male peers in psychology, the road remained an uphill battle and was riddled with exponential barriers for the African Americans. It was especially true even after an additional 30 plus years had passed between the time Calkins completed her studies at Harvard in 1894, and the time that an African American female strived to fulfill her goals through post graduate studies. For African Americans, there were roadblocks at the entrance of the many prestigious colleges and universities.

As it stands, back in the early nineteenth century and beyond, African Americans have demonstrated their exemplary skills, perspectives, and intelligence in the world of nonacceptance due to the differences of their outward appearance, (color of their skin), or culture. Many African Americans have contributed to today’s society in ways that cannot be repeated but are worthy to have been credited for those very contributions. One such person worthy of mention as a great contributor to the world of psychology is Inez Prosser. Prosser is the central focus of this paper.

Inez Beverly Prosser (1895-1934), an African American who faced many obstacles in her quest to achieve the same recognition as Calkins, her female predecessor. Throughout history, racism and sexism were obstacles that have confronted African Americans, both male and female. Historian Cynthia Neverdon-Morton wrote, “…that African Americans saw education as a means of escaping poverty, enhancing their ability to secure employment, and redressing social inequalities and injustices.” (Benjamin, 2005) Prosser was one such person who went on to achieve greatness in her educational aspirations. In 1912, Prosser graduated from college holding a certificate for teaching. She began teaching at various elementary and high schools, while at the same time, worked on obtaining a master’s degree. During  time, the state of Texas did not allow African Americans to obtain graduate degrees. This fact did not deter Prosser; instead, she became an administrator at Tugaloo College. She later applied and was admitted to the University of Colorado to continue her education where she later earned her master’s degree in education.

At the same time Prosser was attending the University of Colorado, she took additional courses in psychology. She eventually returned to Tugaloo College as a member of the faculty and finished her doctoral dissertation titled, “Non-academic development of negro children in mixed and segregated schools,” which was approved in 1933. She was not only to become the first African American to earn a Ph.D. in psychology, but also the first female African American in this country to be recognized as having done so. Although this point appears in many publications, it remains a matter of which you will not find Prosser listed along with the many accomplished psychologist of the past and present—not even within the “Psychology Timeline”, a source material provided by our very own Universities for reference.

The Driving Force and Perspectives of Inez Beverly Prosser

The foundation Prosser utilized for her thought process was the Humanistic theory. This theory focuses on the potential of an individual and the importance of self-actualization. As an educator, Prosser felt that Caucasian teachers within the institutions of the south were not equipped, from a psychological perspective of the black culture to adequately teach African American students. Prosser felt that the Caucasian educators could not relate to those students in the same manner as an educator of the same race. Prosser set out to bring attention to the significance of her view by creating, “The Comparative Reliability of Objective Tests in English Grammar.” The design of this study was meant to demonstrate that the English grammar tests that were being administered at that time were unreliable because they did not take into consideration the background or culture of the African American students. During her tenure, Prosser conducted an extensive study to prove this point.

In her reason given for choosing Cincinnati for her research, this was made clear by her following statement, “ (1) to measure vocational interests, leisure interests, play interests, social participation, emotional or neurotic tendencies, social  ascendancy-submission, overstatement, introversion-extraversion, and general personality adjustment. . . , (2) to ascertain the difference, if any, that exists in these traits, and (3) to determine whether one or the other of these schools is better fostering growth in personality in so far as it can be determined by the available techniques.” (Benjamin L. T., 2005)

Prosser contributed much to society through her commitments for equality in education. “Her dissertation research, although unpublished and largely unrecognized by later researchers, addressed issues that would become central to the debates on school desegregation that led ultimately to the 1954 Brown v. Board of Education decision of the U.S. Supreme Court.” (Benjamin L. T., 2005) Much more was never realized due to her untimely death just one year after being awarded her Ph.D. in psychology. She, along with her husband of 18 years, Allen Rufus Prosser, and one of her sisters, was involved in a head-on car collision as they drove back from visiting family in Texas. Her life may have been short, but her achievements during her life were considerable. She was an encouragement to all who knew her as well as those of us who can only read her story. Prosser left a legacy which is represented best by the following memorial tribute to her honor, “In Southern Memorial Park, an African American cemetery on Roland Road in San Antonio, the inscription on Inez Prosser’s headstone reads,” “How many hopes lie buried here.” (Bazar, 2010)

In the early nineteenth century, racism and sexism were prominent within the community of psychologist. It was not until 1933 that this fact, due to the conference of a Ph.D. bestowed upon Inez Beverly Prosser, was changed forever. Prosser became the first African American female to receive a doctorate in psychology. Prosser persevered through the many obstacles African Americans faced in their quest to obtain an education at the higher levels from the southern state universities that would not accept African Americans. Inez Beverly Prosser was not, she went on to accomplish much during her short-lived life. She excelled in her educational endeavors by graduating with distinction. She later went on to receive her master’s in education. Her ultimate achievement was obtaining the status as the  African American as well as the first African American female to be awarded a Ph.D. in psychology.

Prosser’s life was cut short in a car accident just one short year after receiving her Ph.D.. Prosser, through her studies, was instrumental in helping all of her siblings to reach academic success—five of which earned college degrees. Her contributions helped pave the road that led to the 1954 Brown v. Board of Education decision. Prosser was a prominent psychologist who deserved recognition for all that she brought to the forefront by bringing understanding and equality to the educational system. She was committed, and brought about changes for the diverse people of our society who were confronted with the unjust obstacles on their road to higher education. 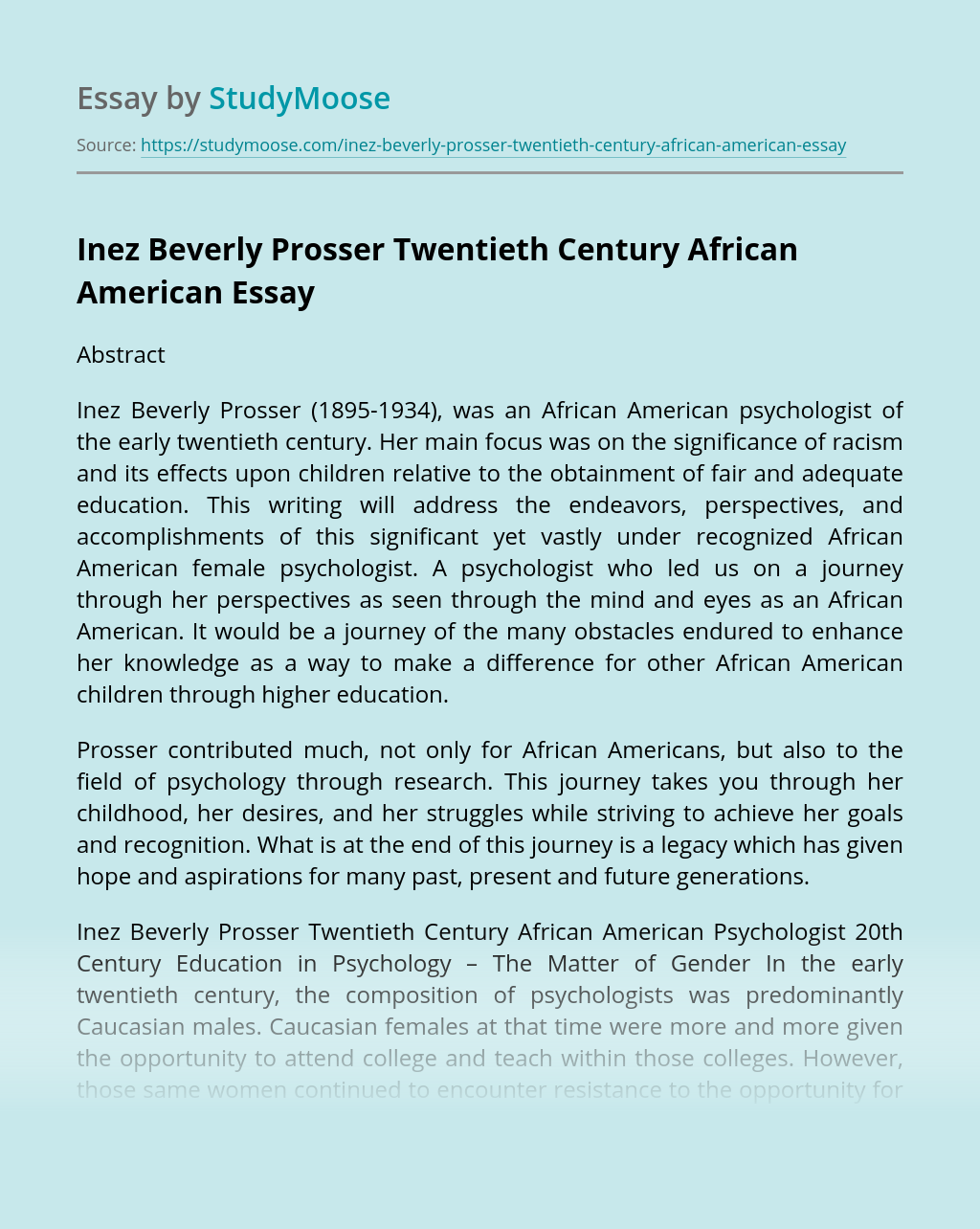