The changes of our world

Throughout the past couple of centuries, our world has changed over a period of time. Everything has changed; generations, the way we live, nature and so much more. History is created every day, and at every moment without even realizing it. Our culture is a huge part of our everyday environment that we do not realize how incredibly significant they influence our lives. There are many important elements that have changed American society; for example the television. Television can be used as a tool to motivate learning and to increase awareness of public issues.

Don't use plagiarized sources. Get your custom essay on
“ The changes of our world ”
Get custom paper
NEW! smart matching with writer

Social Interaction, education, culture, and criminal exposure are some of the key reasons to why the television has played a significant role in our lives.

In today’s modern culture, television has played a big role throughout people’s every day lives. We depend on TV for entertainment, news, education, culture, weather, sports, and so much more. Without the TV, our social interaction percentage would be low; because of the lack of topics.

People these days, talk about TV shows, movies, and more, and without it, a lot of people would be anti social. While television is often criticized for isolating people, it can also bring them together. For example, Super Bowl parties and other events in which people congregate around the TV. During the month-long telecast of March Madness, fans gather at work, in bars and other places to compare brackets, view college basketball games, and discuss the results. In addition, some TV shows invite viewers to share their opinions by calling in or posting comments.

Televisions have influenced education and teaching practices. Educators have had to adapt and provide lessons that not only educate but entertain the learner. It has been shown that attention spans have decreased since the prominence of television. Reading is not seen in the same esteem as in previous generations. Studies have shown that public television programs emphasize literacy development. Using engaging characters and interesting stories, shows like “Sesame Street,” and “Sid the Science Kid,” motivate children to learn, while other specialty channels, such as “Animal Planet” and “Discovery Channel”, also provide educational content in an entertaining way.

Television also provides cultural experiences, which can help broaden viewers’ perspectives and increase tolerance and appreciation for different lifestyles.TV has the ability to create powerful capabilities, TV allows people especially adolescents to share cultural experience with one another. Shows like “National Geographic,” “House Hunters International,” and “The Amazing Race,” focus on life in parts of the world that may be unfamiliar to most Americans. Even shows that concentrate their efforts in the U.S., such as “Diners, Drive-Ins and Dives,” and “House Hunters,” can improve cultural awareness by highlighting the foods, housing trends and customs in different regions of the country.

Lastly, the impact of television also serves to expose criminal activity. According to a 2011 article in ”Time” magazine, the television show “America’s Most Wanted,” was “an unprecedented collaboration between law enforcement and television,” and led to the capture of 1,154 fugitives as a result of phone tips from TV viewers. Kevin Perkins, an assistant director of the FBI’s criminal investigation division told “Time,” the agency captured 17 of its most highly-ranked fugitives and also solved over 550 cases as a result of TV viewer tips. Perkins also says that they’ve captured suspects within minutes of an episode airing on TV. Also the news; today these days, there are many news channels to inform us on what is happening around the world.

Without the news, we would often wonder what is happening, despite the advantage of also having social media,it is often not reliable nor true. References: Time.com: The End of American’s Most Wanted: Good News for Criminals, Bad News for the FBI.

To conclude, throughout the past hundred of years, our world has changed over a period of time; generations, the way we live, nature, and more. History is created ever day, and at every moment without even realizing it. Our culture is a huge part of our every day environment that we do not realize how incredibly significant they influence our lives. One important element; the television has changed American society. Social Interaction, education, culture, and criminal exposure are some of the key reasons to why the television has played a significant role in our lives. Without the television, our generation would be a lot different.

The changes of our world. (2016, Aug 10). Retrieved from https://studymoose.com/the-changes-of-our-world-essay 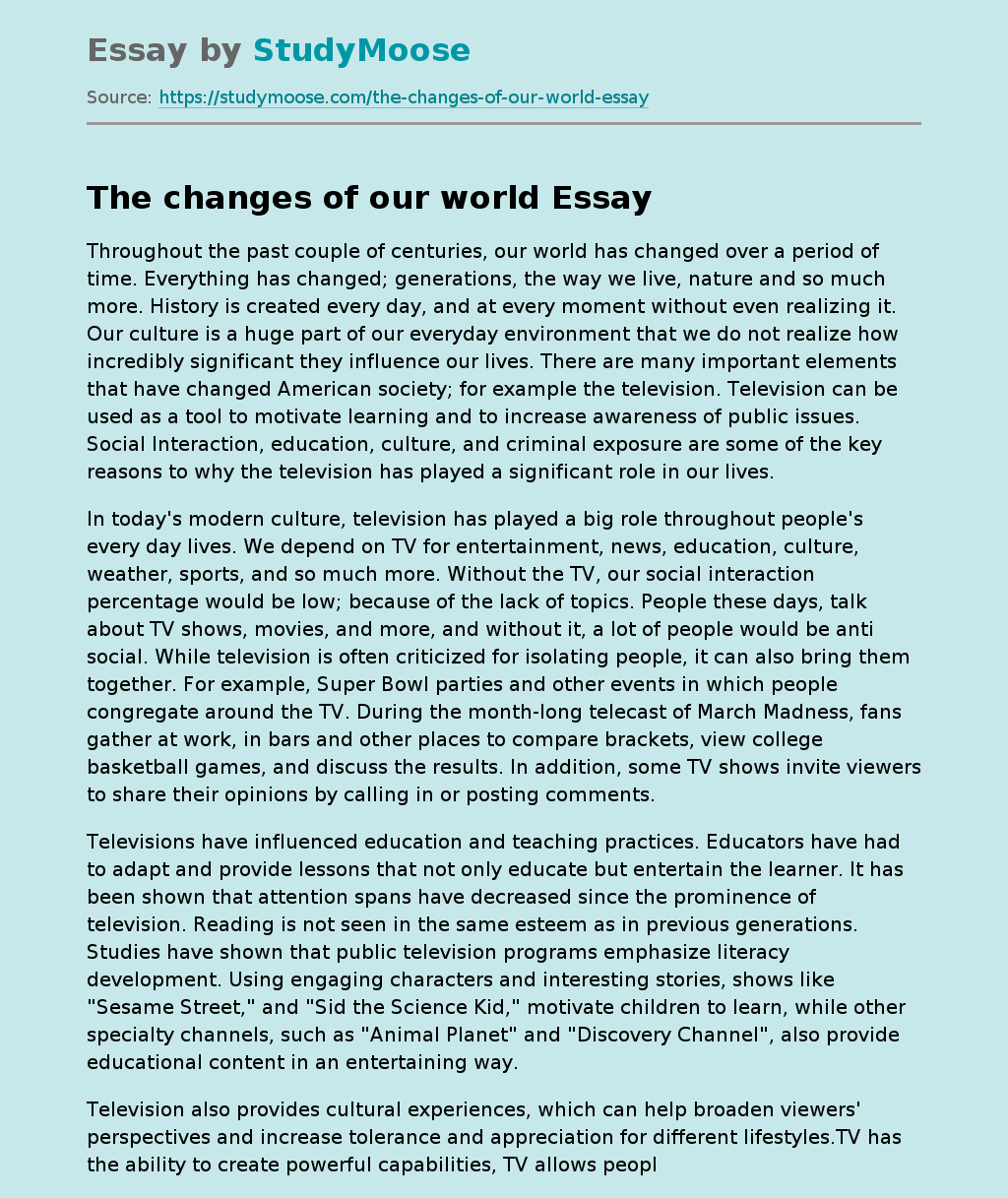