In What Way Is Hamlet Relevant in Our World Today?

In that question, the word Hamlet is not underlined because the play itself is not nearly as relevant as a whole as Hamlet the person is. The play is full of allusions, jokes, and implications that is difficult for a modern audience to pick up on and understand their significance to the overall work. After all, Shakespeare wrote this as a performance piece that was to help pay the bills as much as it was to be a work of art.

Don’t waste time
Get a verified writer to help you with In What Way Is Hamlet Relevant in Our World Today?
Hire verified writer
$35.80 for a 2-page paper

This is in no way to suggest that Shakespeare was just trying to make a quick buck and did not say anything profound through his play. This is to merely clarify that exactly how the events happen and the minor details and nuances of their telling are less important than the character of Hamlet himself.

Hamlet’s growth in his view and philosophy about life is the most significant aspect of this work. Hamlet is facing what any young person faces.

True, not everyone loses his father via murder, has a mother that remarries his father’s murderer, murders their ex-girlfriend’s father shortly before she herself dies (commits suicide?), kills his girlfriend’s brother, and murders his stepfather as he dies of poisoned drink and blade both. In fact, those events in isolation aren’t particularly common, but to have even two or three in conjunction is more than unfortunate, and all of them to fall on a single young man is downright unfair to say the least. Even before he discovers his father’s death is murder by Claudius, he remarks, “How weary, stale, flat and unprofitable/Seem to me all the uses of this world!”, indicating how he already feels at a loss for what to do with himself.

This is just after he’s been told he won’t be able to return to college as he’d planned to do. Young people today still have their future plans disrupted by tragedy; whether it is personal, such is the case with Hamlet, or financial in nature. As the play moves on, Hamlet meets the Ghost, Ophelia stops speaking with him, and his madness (?) begins. The scene Ophelia describes to Polonius in which Hamlet enters her sewing room disheveled, “And with a look so piteous in purport/As if he had been loosed out of hell/To speak of horrors,–he comes before me.”, is overlooked as only important to evidencing Hamlet’s madness.

In fact, it is quite the contrary. This is a moment in which Hamlet, though saying nothing, portrays through his body language all the anguish he feels in his dilemma. At this point, he is aware of his options: Avenge his father’s death and face the consequences, or accept his lot in life and make the best of it with Ophelia, the woman he loves. To be torn between rocking the boat, sticking it to the Man, and risking everything, or just living on your knees as best you can is an agonizing and contemporary decision that people of any age, but especially young people face daily. Hamlet goes on to explore a far more morbid option, which sadly some teens choose.

“To be, or not to be: that is the question:/Whether ’tis nobler in the mind to suffer/The slings and arrows of outrageous fortune,/Or to take arms against a sea of troubles,/And by opposing end them?” The suicide he muses about is twofold. There is the physical act of suicide, but also the suicide of a long, unsatisfying, unfulfilled life. This is the first time he voices it explicitly, but the theme has been building since his first remark on the unprofitability of this world. As with most youths, he comes to decide in favor of life, if for no more reason than the fear of an unknown, possibly worse, or worse, possibly nonexistent afterlife.

The morbidity of Hamlet’s musing increase appropriately as he lounges about unrecognized as Ophelia’s grave is being dug. “Imperious Caesar, dead and turn’d to clay,/Might stop a hole to keep the wind away:/O, that that earth, which kept the world in awe,/Should patch a wall to expel the winter flaw!” The best of us are little more than dirt and a name after death. Whether it’s the scenery or all the death Hamlet is cognizant or even responsible for, he’s moved from his own mortality and fragility to the general statement about humankind. This sort of realization is still very much a part of maturing and growing as an imperfect person in an imperfect world today.

The final stage in Hamlet’s philosophical growth is evidenced as complete by his remark to Horatio before his (supposedly sporting) duel with Laertes. “If it be now, ’tis not to come;/if it be not to come, it will be now;/if it be not now, yet it will come:/the readiness is all:/since no man has aught of what he leaves, what is’t to leave betimes?” This sort of Zen-like acceptance of what his life has meant and been up until this point, and the directions available to him allow him to prevail, even though he dies, in his mission to purge the Danish court of the rottenness (Claudius, whom his father is contrasted with) Marcellus mentions in Act One.

In the end, Hamlet becomes his own man, and if descriptions of his father are anything to go by, a man of whom his father would be proud. He refuses to compromise with the appearances of his world and instead opts to face the hard realities. It costs him his life, but it also made his life worth living, down to when he drinks the rest of the poison so that Horatio will not.

In doing so, he both implicitly and explicitly charges Horatio’s life with a purpose, “If thou didst ever hold me in thy heart/Absent thee from felicity awhile,/And in this harsh world draw thy breath in pain,/To tell my story.”. Even though his life ended prematurely, he died fulfilled. Throughout the play, his comprehension of his world and his influence grows, and he makes an inspiring, albeit tragic, change for the better. Hamlet’s life, minus the woeful details, are a highly relevant portrayal of the philosophical growth of youths yesterday, today, and near certainly tomorrow.

In What Way Is Hamlet Relevant in Our World Today?. (2017, Apr 02). Retrieved from http://studymoose.com/in-what-way-is-hamlet-relevant-in-our-world-today-essay 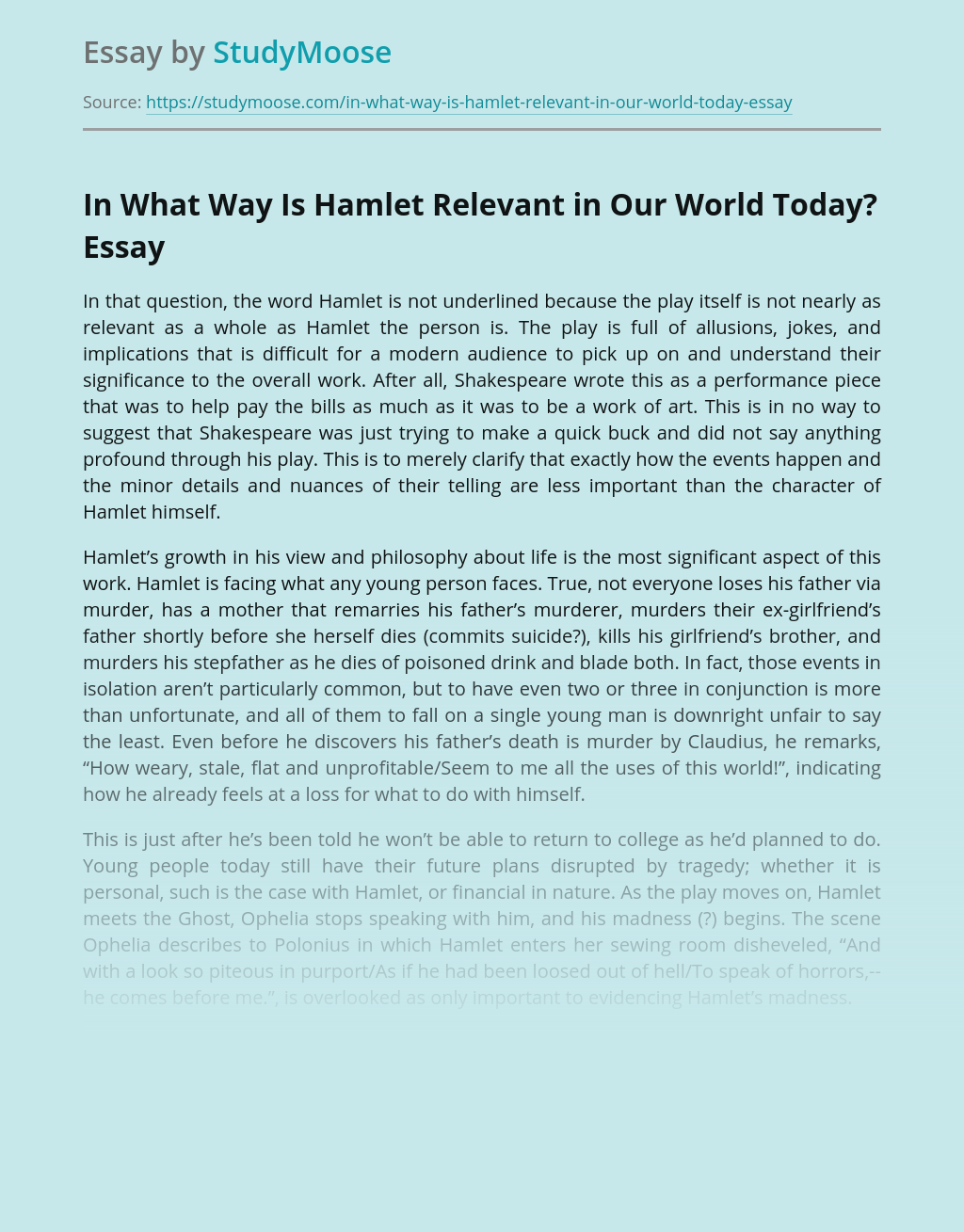 Don’t waste time
Get a verified writer to help you with In What Way Is Hamlet Relevant in Our World Today?
Hire verified writer
$35.80 for a 2-page paper
Stay Safe, Stay Original