"The C Word in the Hallways" by Anna Quindlen Essay

In the article “The C Word in the Hallways”, Anna Quindlen claims that teenage killings can be prevented by drawing attention to mental health. Quindlen supports her claim by giving examples of individual cases in great detail, and stating information relating to the issue of mental health. The author’s purpose is to persuade readers so that they should treat mental illness instead of dismissing it as a “character flaw”. She speaks in a serious but derisive tone to address parents, schools and healthcare providers.

Don't use plagiarized sources.
Get Your Custom Essay on “The C Word in the Hallways” by Anna Quindlen Just from $13,9/Page

Quindlen begins her article by affirming that mental health is not considered important. She exaggerates by calling it “a plague on all our houses…laying waste” . It is not a contagious disease or infection but rather an issue being ignored and allowed to germinate. She makes this comparison in order to emphasize that mental illness is not take serious at all. It is not seen as important as a physical ailment. If people cared for the solution to mental illness, ‘this vaccine’ “would save lives”.

If it were a cut, one wouldn’t let it become infected but that is what they are doing with mental illness. This reveals the unbalanced view many may have regarding physical and mental illnesses.

In the article Anna Quindlen moves on to argue that these kids are victims of a failing mental health system. She incorporates different accounts where this proved true such as with Sam Manzie and Kip Kinkels. “Excuses, excuses.” This repetition to show the attitude that many have toward such cases. It also draws attention away from the severity of the crimes and adds a mocking tone toward those who’d focus on those details. No progress is made because no one wants to solve the problem. Both young people had previously been evaluated but it was to weak to prevent the events that occurred. She employs this sarcasm to reveal the kid to be the true victim. The victim of neglect and of apathy from the mental health system.

Quindlen further acknowledges that no one wants to use the C word. “Parents are afraid” and don’t want to take the responsibility or blame of causing
such an environment. An environment ” that tells teenagers their demons are a disgrace”. This alliteration draws attention to the parents role in taking care of the matter. They are to scared to admit what needs to be done but would rather let such behavior persist. Then the words “demon” and “disgrace” elevate the situation. Demon denotes an outside force having a bad influence and because of this they are a disgrace. It’s easier for parents not to address the issue rather than to face it. This way they can go on blaming it on “demons”. But it’s not just with parents. This is the attitude that schools and health and insurance providers also hold. If this continues, they will also continue to have to ‘identify the bodies’.

The problem starts in the home but as kids grow up it it not confined. It continues to school until finally reaching healthcare providers. By then it may be too late. all these parties have a share in contributing to the problem even if nono one wants to accept that. Quindlen was effective stating the problem and addressing the roles of each party. If everyone saw mental health condition as something serious then, only then, can a solution can they prevent horrific events.

"The C Word in the Hallways" by Anna Quindlen. (2016, Sep 13). Retrieved from https://studymoose.com/the-c-word-in-the-hallways-by-anna-quindlen-essay 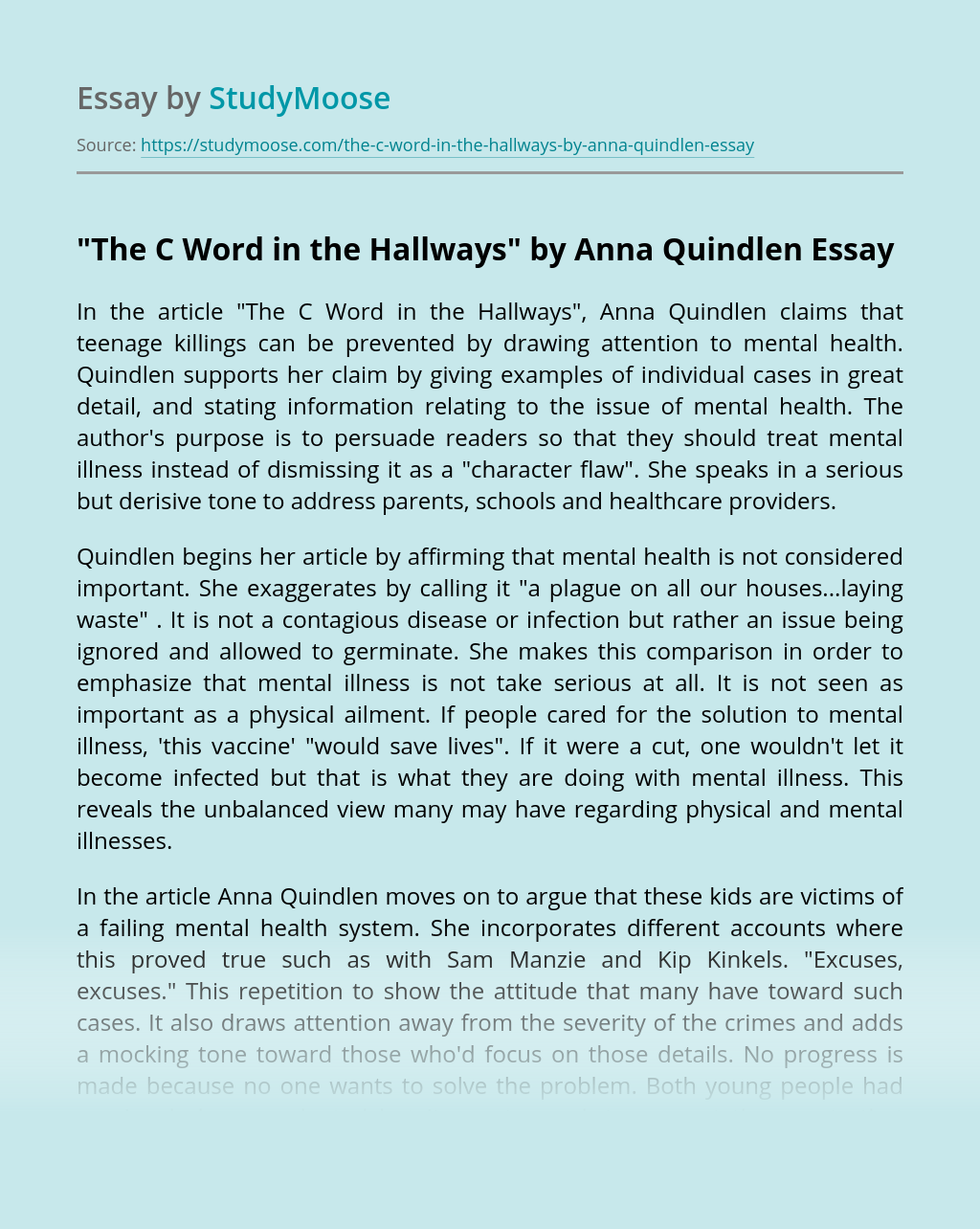 The frontiers of a book are never clear-cut: beyond the title, the first lines, and the last full-stop, beyond its internal configuration and its autonomous form, it is caught up in a system of references to other books, other texts, other sentences: it is a node within a network. -Foucault What we tend to call... VIEW ESSAY

“The Things They Carried” was written by Tim O’Brien. Tim was born on October 1st, 1946 in Austin, Minnesota. He earned a degree in political science at Macalester College in 1968 then was drafted in to the military. From 1968 to 1970 he served as a foot soldier in the Vietnam War. O’Brien was awarded... VIEW ESSAY

Applying to the theme of religious faith and personal fate in his famous novel A Prayer for Owen Meany, John Irving discusses this crucial issue through the narrator John Wheelwright whose unusual understanding of God and extreme political views uncover inner doubts of people in relation to Christianity. In this regard, John Wheelwright is portrayed... VIEW ESSAY

View sample
The Good Earth: the book vs. the movie

The Great Earth, made in 1937, was an intriguing portrayal of life in China during these times. Although I think it is an excellent motion picture for this period, I had a tough time associating with the film. The advancements in movie have made it tough to go back to older movies; things like digital... VIEW ESSAY

View sample
Into The Wild: Test

McCandless was brave enough to do things most people would not even think about doing. “He was looking for more adventure and freedom than today’s society gives people,” comments one of Chris’s friends” (Krakauer 174). What modern society offers did not appeal to Chris McCandless; he wanted a different life that most people had themselves.... VIEW ESSAY