‘Anna Frith, a women who had faced more terrors than many warriors…’ It is the women in the text that prove to be stronger in the face of adversity. To what extent do you agree?

Geraldine Brooks’ novel ‘Year of Wonders’ discovers the strength of women throughout the year of the bubonic plague in 1666. Anna Frith, along with Elinor Mompellion and the Gowdie’s, are all seen as heroine figures throughout the hardship. There are several female characters in ‘Year of Wonders,’ who, partake in many key events, giving a perception of women being stronger when faced with adversity.

Don't use plagiarized sources. Get your custom essay on
“ Year of Wonders ”
Get custom paper
NEW! smart matching with writer

Although, there are many women who cannot cope with the distress throughout that year and are quite clearly not proved to be stronger. ‘Year of Wonders’ defines how some characters never completely recover from hardships, but others are strengthened and transformed by their experience.

Anna Frith, a previously illiterate 18-year-old housemaid, becomes a scholar, midwife, and independent woman capable of supporting herself and her children over a series of events.

Anna is a strong woman in the novel, who portrays a lot of courage. This is evident as Anna is the only on to stand up to the lynch mob who are intending on murdering the Gowdie’s. Anna also demonstrates courage, as well as self-sacrifice when she decides to adopt Mrs. Bradford’s illegitimate daughter, to prevent him from being murdered. Anna also shows compassion, as her maternal instincts show her unselfishly caring for others who suffer from the ‘venom in the blood.

’ Even though she constantly puts herself at risk of infection daily, Anna continues to provide help to the community. Anna’s bravery and knowledge of mining enables her to empower Merry Wickford to keep her mine. These character traits give Anna a strong role in the novel as being a caring and supportive member of Eyam.

However, Anna has her moments of self-doubt as her ‘cowardice shamed’ her and showed an inability to cope as she used the opium found at the Gowdie’s. She is able to overcome this, but again shows guilt at not being there for her father, Josiah Bont, at the time of his death. This is quickly relieved as she acknowledges the abusive, neglected childhood he provided her with. Anna’s recognition of not dwelling morosely on the past gave her the ability to emerge from the plague as an accomplished midwife and natural healer, who ‘had been tempered and made strong’ with a sense of being able to create her own destiny. After previously being scared of the Bradford’s Anna ‘misliked [herself] for giving way to that fear,’ but later showed her strong willpower to not be treated as a servant to the Bradford’s anymore. Her bravery allowed her to save Mrs. Bradford’s child, which caused her to flee to Oran where she became a doctor and a scholar. Much of Anna’s transformation occurs as a result of the compassion and guidance of Elinor Mompellion, the opening chapter also hints that Anna has undergone a transformation during the past year, which is then explored. Loving and nurturing friendships have the ability to transform lives and provide individuals with new opportunities, which is evident through Anna and Elinor’s relationship.

Elinor Mompellion, whose ‘frail body was paired with a sinewy mind,’ was among the strongest characters in the book. Elinor took a great interest in Anna, as she gave her education, ‘for as [Anna] love to learn, so she loved to teach.’ For which Elinor discovered Anna’s hidden talents and thirst for knowledge as she teachers her to read and write. Their friendship was built on a mutual respect as well as admiration for each other’s loyalty and kindheartedness. Elinor believed in Anna without any hesitation and it is evident at the end of the novel that Anna ‘is the one good, perhaps, to come out of this terrible year.’ Elinor is the major reason that Anna finds the strength to go on after the tragedies that befall her throughout the novel.

It is Elinor’s encouragement, which pushes Anna in becoming a local midwife. Elinor gives Anna emotional support throughout her times of self-doubt, in instances such as the death of Anna’s sons or when the lure of the opium’s captivating spells creates a threat to her health. Anna had a strong infatuation with Elinor, ‘she was my friend, and I loved her,’ as Elinor embodied the concept of self-sacrifice along with benevolence. Elinor’s strong-willed traits helped many villagers throughout the year, posing her as a more empowered character in the novel.

Mem and Any Gowdie, although different and considerably strange, they were
strong women and didn’t let society defy who they were. It is Mem and Anys who provide the town of Eyam with a ‘physick’ that will be a considerably helpful remedy. With strong differentiation of the Gowdie’s, in comparison to the rest of the town, they were viewed, to some, as being involved in witchcraft. However, as it was, ‘the well-being of [the] village rested more on [their] works, than on the works of the rectory’s occupant’. ‘She was a rare creature, Anys Gowdie,’ but Anna has a strong admiration for the ability she has to ‘listen to her own heart.’ The Gowdie’s did not succumb to the town’s social expectations of it is evident that Anys is ‘not made to be any man’s chattel.’ Anys is entitled to her ‘freedom,’ by not having a man to rule over her.

The strong traits she possesses, puts her in a distressed situation in that the lynching mob sends her to her deaths. With Anys’ ‘quick mind and swift tongue,’ Anys does not plead for mercy; instead she uses the villagers fear and uncertainty as retaliation. The Gowdie’s, both admirable members of Eyam, are strong independent women who are accomplished in helping Eyam in many ways.

Although many of the women in ‘Year of Wonders’ posses admirable characteristics with strong minds to help the town of Eyam through this grief stricken year, it is not always the case. The characters of Aphra, Elizabeth Bradford and even Mary Hadfield, find it difficult dealing with the distresses of the year of 1666, which cause them to become unpleasant associates of the town. The means of Mary Hadfield, succumbing to the pressures of the town push her into a position of self-doubt when sentencing Mem Gowdie to death; this is shortly relieved once Anna also steps up to show support. Aphra Bont used the plague as an opportunity to further her self-interests, which caused a threat to many others, by means of acting as a ghost of Anys Gowdie, who charged significantly large sums of money in return for useless spells. Aphra was lost in jealously for ‘in her heart Aphra had never ceased to pine for the kind of power a woman like Anys might wield.’ Elizabeth Bradford, a high-class women, treated the people of Eyam with disrespect in thinking she was above them. Elizabeth was an arrogant woman as well as ‘a coward’ who ‘was the daughter of cowards.’ It is these women in ‘Year of Wonders’ who prove that not all women are stronger in the face of adversity.

‘Year of Wonders’ shows us humanity’s ability for regeneration after catastrophic events through characters that possess the necessary strength to emerge renewed from devastation. It also suggests that individuals should possess certain characteristics if they are to emerge in a positive manner from a distressing event such as the plague, which is what Anna shows through her courage, compassion and lack of prejudice. It shows that although many women in this story are posed as strong-willed women, there are also those who are not. 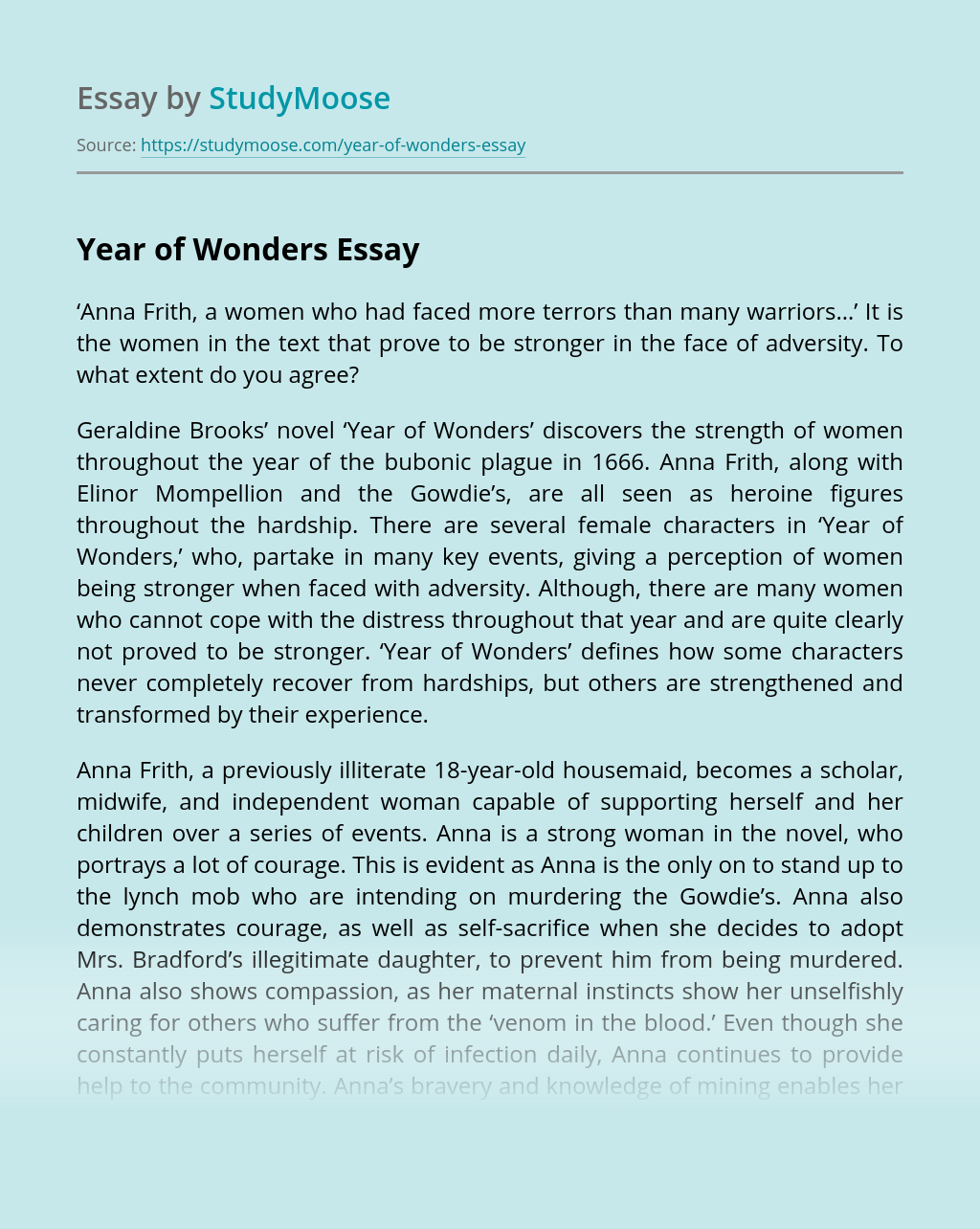