Essay on Anna Quindlen's "A Quilt of a Country"

People are such disparate things, they range from black to white to boy and girl, and of all the nations on Earth, I’d have to say that America is the one country that exemplifies that the most. Unlike other normal nations, populated with a certain groups of people who hold certain types of beliefs, America is a nation made up of all the ethnicities of the world, and unlike other normal nations, the inhabitants of America don’t tend to get along very well.

Don't use plagiarized sources. Get your custom essay on
“ Essay on Anna Quindlen’s “A Quilt of a Country” ”
Get custom paper
NEW! smart matching with writer

In the first half of the article, she immediately starts by stating a part of her claim, America is a nation of conflicting and interchanging parts, and right afterwords attacks the notion it was founded on by pointing out that most people consider themselves to be better than someone else.

This serves to support her claim, that America shouldn’t work, by disproving its very foundations. She then uses a historian’s quote in order to build off of and make her analogy, that America is a quilt.

This analogy reinforces her claim by drawing a striking comparison between America and a quilt and helps readers interpret what she’s saying. Afterwords she says that the American consensus to treat everyone equally has failed spectacularly, and proves it by listing numerous examples of social and racial prejudice, such as the lynching of blacks and the discrimination against women. Not only does this butcher America’s foundations(again), it also makes the allusion that America is a very violent place filled with turmoil. Both of these would support the idea that America shouldn’t have worked in the first place, which is her claim. With all those examples of failure and injustice in mind, she asserts that it would be hard to explain to children why America is great, which also supports her claim because it makes another inference that America shouldn’t work. Anna’s third paragraph is dedicated to addressing a counterclaim, that the rise of ethnic-based pride has undermined unity. She argues that America has always been undermined by differences in race, and this new rise of pride has amounted to nothing.

Although the counterclaim in this paragraph doesn’t directly oppose Anna’s claim, perhaps it even supports it, the evidence and reasoning she uses supports the idea that America shouldn’t work. Quindlen’s account of past Philadelphia is a one of distaste and hostility, and her description of other cities that existed around the same time are just as bleak. Like the other pieces of evidence, these two support her claim by giving America the appearance of a country that’s in internal conflict, and shouldn’t work. She finally moves into her last paragraph in the first half, in which she first ponders the existence of this nation, and then depicts it as being filled with conflict. Her sentences in this paragraph follow a similar structure, at least in the beginning, in which she starts out with “What is the point of a nation in which…”, and proceeds to give a negative example of the denizens of America. This repetition acts to cement the idea that America is dysfunctional, which is the core of her claim, and after the repetition stops she ends the paragraph with a change of tone, when she says that despite all of this, America still stands.

This change of tone signals the transition into the second half, in which she moves on from explaining why America shouldn’t work, to why America does work. Unlike the first half, where Anna Quindlen’s tone implies that America is a collection of warring ethnicities, she changes her diction from doubtful to dumbfounded in order to better suit her goal, proving that America does work. She starts out by claiming that the reason America remains intact is a common enemy. Anna supports her reason by listing some examples of wars where we were united against a single entity, such as the cold and world wars. After that, she points out that during times where we didn’t have a nation to fight against, we were less united and more separate. She also points out that we became reunited as a result of 9/11. This supports her reason because through deductive reasoning, the reader concludes that a common enemy is what binds the people of America. These pieces of evidence support her central thesis because they prove that the existence of an enemy makes us united, which would in turn make us work together and subsequently make America work better, which is her claim. In the next paragraph, however, she starts out by bringing up that most Americans still say that “The U.S. is a unique country that stands for something special in the world”, even during peace time.

This would imply that there’s another reason why America’s still united, and Anna Quindlen uses this quote to justify her next sentence. Her next sentence which depicts America in a fashion that makes it seem implausible, supports the part of her claim that says America shouldn’t work, and she also says that it somehow does, annoyingly. This aids the second half of her claim, America does work. In the last sentence, she finally states what the other reason for America working is: two strains of behavior. She says that the first strain of behavior is the hardworking psyche of Americans, and the second strain is the pilgrim-like persona of immigrants. Her support for her reason is a quote that the immigrants of a couple decades ago are just like the immigrants of today, who work hard and are subsequently making a living, which would allude to the idea that these personalities persist throughout all of America, regardless of time or space. With that in mind, it supports her claim because it shows that we all have something in common, and therefore can become unified more easily, which makes America work better.

After all of that, she moves onto her very last paragraph; her conclusion. She starts off by pondering what word best describes the people who live in America, from tolerance to pride, and then mirrors her claim by describing America as a ludicrous idea that shouldn’t work, yet does. She then says that the people of America are so varying, you could trace back the heritage to each person who died during 9/11 to every single country in the world; this analogy aids to the allusion that America is a collage of disparate and disjointed parts. Finally, in the very last sentences of the article, she draws a connection to the beginning of the article by reusing the phrases: mongrel nation, and improbable idea, and by mirroring the beginning and last statements of her article, she creates a lasting impact on the reader.

Anna Quindlen’s article, “A Quilt of a Country”, uses a wide range of evidence in order to validate her reasons, from quotes to analogies to explanations, and not only are they effective, they all help support her central thesis, one way or the other. Anna also divided her article into two separate sections, in which she focused on supporting one aspect of her claim in each. This let her orientate and tune her words for a specific purpose, and not flood the reader with conflicting conclusions. In the end, Anna succeeded in proving why America shouldn’t work, yet does, and she succeeded in proving that America is composed of different, even conflicting ethnicities. People truly are such disparate things, as Anna Quindlen would agree, they range from black to white to boy and girl, and America is the one country that exemplifies that the most. Unlike other nations, America’s truly a wonder when it works.

Essay on Anna Quindlen's "A Quilt of a Country". (2016, May 30). Retrieved from https://studymoose.com/essay-on-anna-quindlens-a-quilt-of-a-country-essay 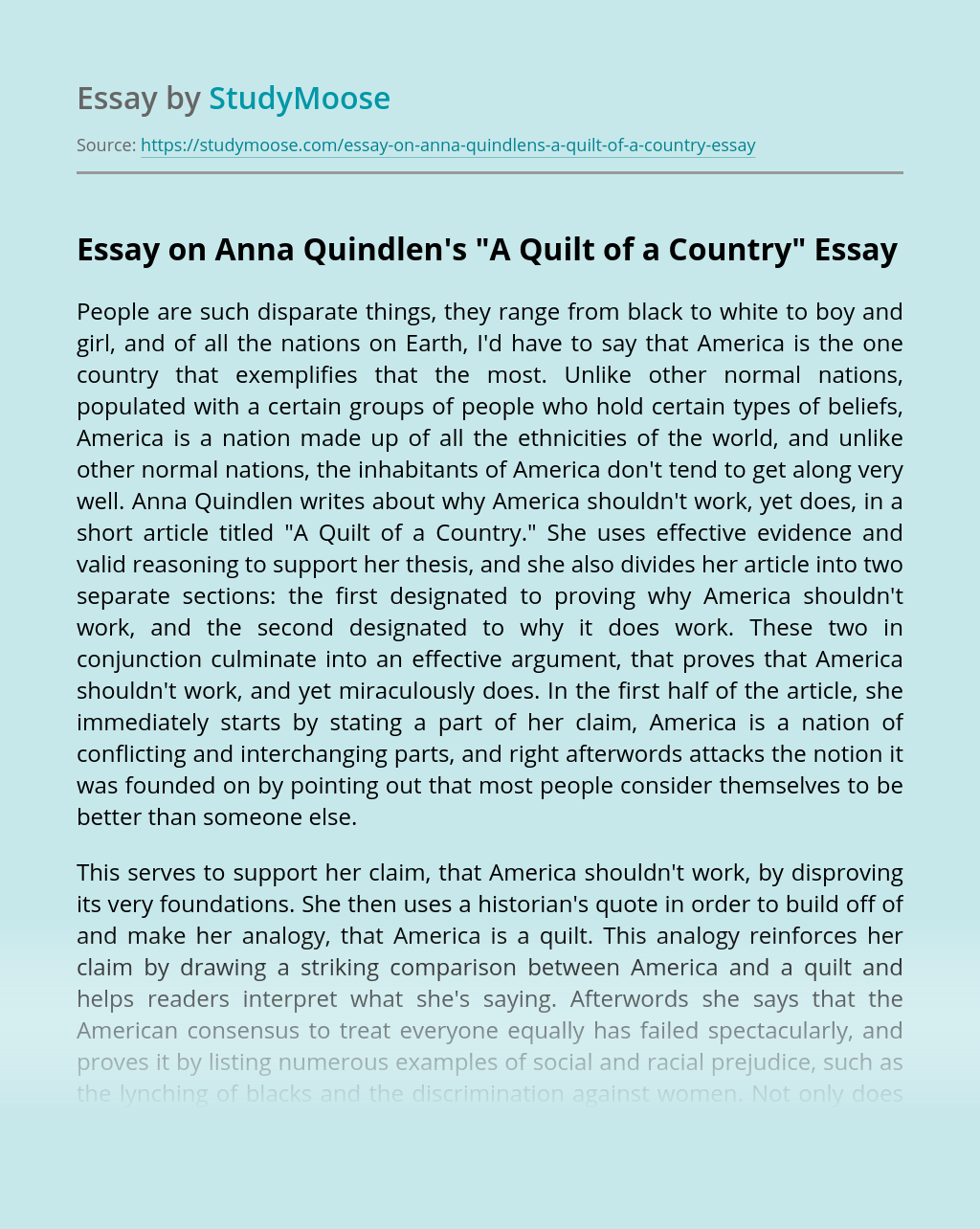