Adversity in "Indian Horse": Story of Difficulties and Misfortune

Adversity is like a strong wind. It tears away from us everything but the things that cannot be torn so that we may see ourselves for what we really are. Adversity suggests difficulties, trouble and trauma as it tests our potential and strengthens our sense of self-confidence. In the novel Indian Horse written by Richard Wagamese, there are many situations where the main character Saul Indian Horse is forced to overcome the adversity that once destroyed his spirit and made him feel as if he was worthless.

Don't use plagiarized sources. Get your custom essay on
“ Adversity in “Indian Horse”: Story of Difficulties and Misfortune ”
Get custom paper
NEW! smart matching with writer

The concepts of adversity found in Indian Horse such as being beaten at the residential schools and the racism he faced while playing hockey, shows Saul’s constant inner struggle and his longings to become a more powerful individual. Throughout the novel, Saul is exposed to many painful experiences that leave him with no identity and a bleak outlook on his life. In the beginning, we quickly learn about Saul’s childhood of him being taken away from his family and forced into the Indian Residential School system.

During his time at the school, we learn about the horrors that he witnessed and the abuse experienced at the hands of the school’s educators. “They called it a school but it was never that….There was no tests or examinations.

The only test was our ability to survive.”(Pg.79) The emotions in the quote represent the suffering and agony he endured while being forcibly taught the ways of the white people. The school Saul refers to is known as St.

Jerome’s Indian Residential School; which many people described as “Hell on earth”. Sauls world is quickly destroyed as he is thrown into a world of emotional and physical abuse brought on by the hands of the priests and nuns employed at the school. “They took me to St.Jerome’s Indian Residential School. I read once that there are holes in the universe that swallow all light, all bodies. St. Jerome’s took all the light from my world. Everything I knew vanished behind me with an audible swish like the sound a moose makes disappearing into the spruce.” (Pg.43) The extreme detail given in this quote shows the severe impact that the Residential Schools had on the First Nations People and shows the suffering and injustice that the people experience.

The many beatings, suicides and sexual molestation destroyed many children’s hope and created a sense of life that many viewed as not worth living. “When your innocence is stripped from you, when your people are denigrated, when the family you came from is denounced and your tribal ways and rituals are pronounced backward, primitive, savage, you come to see yourself as less than human. That is hell on earth, that sense of unworthiness. That’s what they inflicted on us.”(Pg.81) This quote from the book represents how the First Nations people were stripped of everything that they had ever know, their language, their culture and even their choice of food. During their time in the school, the beatings and threats instilled the children with a sense of continuous fear. The time spent at the school stripped not only Saul’s but every child ’s innocence, traditions and identity.

These horrible experiences were not only experienced while attending the Residential schools but also in the local hockey teams and town. Sauls was forced to overcome many of these adversities while engaging in his passions for hockey. At the beginning of his playing career hockey served as a means of escape from the horrors of the school. “I kept my discoveries to myself and I always made sure that I left the surface of the rink pristine for the rest of the day, I’d walk through the dim hallways of school warmed by my secret. I no longer felt hopeless, chill air around me because I had Father Leboutillier, the ice, the mornings and the promise of a game that I would soon be old enough to play.”(Pg.66) Throughout the quote, it shows how hockey gives Saul a sense of hope. It is through hockey that Saul’s is able to escape from his cruel reality and find the sense of friendship, family and self that were stolen from him. Although Sauls future seemed to be bright and pointed to his contending for a position within the National Hockey League, the constant racism that he faced from the crowds and other teams ends up crumbling his faith in the one thing that gave him a life outside of the Residential School. “But there were moments when you’d catch another boy’s eye and know that you were both thinking about it.

Everything was contained in that glance. All the hurt. All the shame. All the rage. The white people thought it was their game. They thought it was their world.”(Pg.136) This quote shows how Saul’s passion for hockey was crushed by “the white people” that felt that Indians should not be allowed to play hockey. The game that was once his escape proved to just be another thing for the white man to take. They felt as if the game of hockey was only to be played by people of the same race. The constant racism and hate from fans began to diminish his ability to play hockey and the verbal abuse constantly yelled at him because of his culture and skin colour quickly destroyed what was left of his spirit and caused him to build up a rage that he could hardly contain. “During one game the fans broke into a ridiculous war chant whenever I stepped onto the ice…. When I scored, the ice was littered with plastic Indian dolls.” This refers to when Saul joined an all-white team and how he was hated by the team and the fans for breaking the tradition of “the white man’s game”.

In the end, we see Saul’s love for hockey that once allowed him the freedom and escape from the abuse was now stolen from him due to his distance full fans and the belief that hockey was “the white man’s game” Through the beatings described in the residential school and the racism that he faced while playing hockey we are able to see just how severely Saul is affected internally by all that he has endured. With every chapter, we become more familiar with his unbreakable will of a boy who has been forced to endure more than anyone should in a lifetime. At such a young age Saul was forced to face various types of adversity and to go up against his worst fears which created long-lasting traumatic effects on his later life. The author conveys that staying true to your beliefs and roots is what will get you through life’s obstacles despite any temptations that will try to veer you from finding your true self. This novel illustrates that hockey is not merely a sport, but has the capacity to bind us together. No matter what colour your skin or where you come from, it’s the love of the game that shows us that we really are not that different after all.

Adversity in "Indian Horse": Story of Difficulties and Misfortune. (2020, Sep 02). Retrieved from https://studymoose.com/adversity-in-indian-horse-story-of-difficulties-and-misfortune-essay 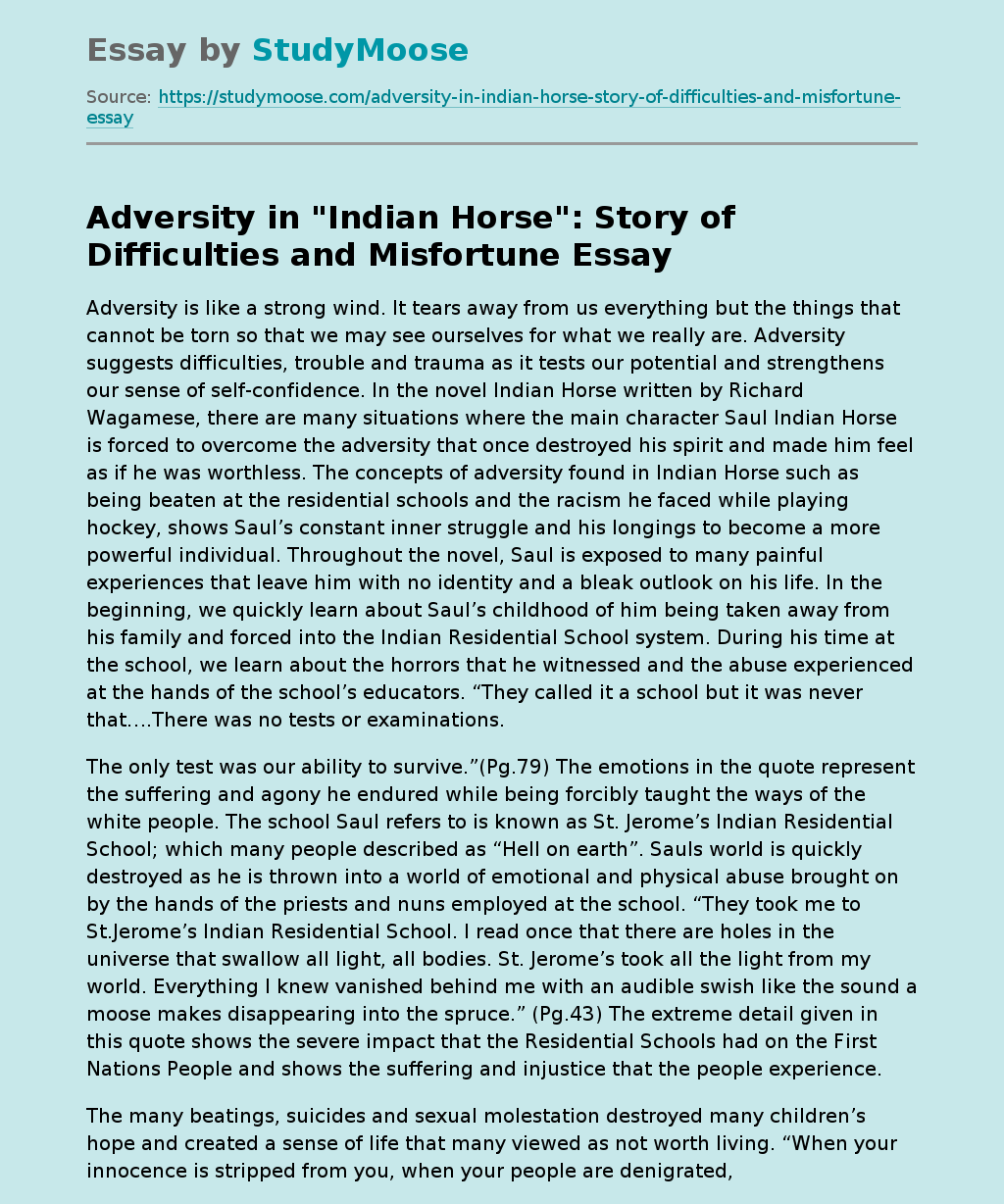