During the 18th century, a great change occurred in Britain. Britain became an industrialized country and an empire. The Industrial Revolution can be regarded as a technological change in Britain when manufacturing began to rely on steam power rather than on animal labour or wind power. The overall economic shift towards large scale industry rather than small scale individual operations. The British Empire was expanding rapidly during the 18th century. An empire is a large, multi-ethnic state, whose political structure is held together by force.

Don't use plagiarized sources. Get your custom essay on
“ The British Empire and The British Industrial Revolution ”
Get custom paper
NEW! smart matching with writer

Industrial Revolution required a steady and constant supply of raw material Britain itself did not have many raw materials, its weather and landscape did not allow her to grow fine cottons or sugar which were in great demand and valuable back in 18th century.

This was a major obstacle in the way to Industrial Revolution but the British because of its huge empire could get these material through trade. Britain got most of its cotton by trading with India because the Indian cotton were in good quality and were way better than the European ones. Britain also traded with the West Indies for sugar. These raw materials were all manufactured by the factories back in Britain and exported it back to the colonies or other European countries.

Industrial Revolution also required markets for the increasing number of goods it produced and Britain had none of this problem since its Empire was so huge and the British were skillful at shipping. Manufactured goods were exported to nearly all colonies of Britain. In America, the British even set laws to restrict the colonies import non-British goods and the colonies must export goods to British merchants. This helped Britain to create a huge, world-wide market but it also led to the loss of the American colonies.

Building factories and buying machinese required a large amout of money but through trading with the colonies, most merchants were very rich and had plenty of money to build large scale factories. The merchants got riches from trades such as cotton, tobacco but most of them made big profits from the trade is slaves. This made sure there was enough financial support for the industrialisation.

Industrial Revolution made Britain the largest supply of most manufacture goods, most countries had to buy British goods. This strengthend the empire because countries relied on the empire. For example, India had the fine cotton but they still had to buy cotton goods from Britain because it did not have the technology and manufacturing skills. Once money was gained by exporting goods, merchants or factories owernes could buy more raw materials from the colonies and this cycle repeated itself over and over again.

Large scale factories required many labour which meant it needed more workers. The growth of population in the Empire provided enough workers. During the 18th century, 12 million people which was three quatre of the population were workers. Women and children that were only ten could also work in the factories. This lead to a major social issue which was child labour. Once again, the empire ensure one of the main factors for Industrial Revolution.

Industrialisation also increased the growth of population in the empire. As Adam Smith said in the book “Wealth of Nations”, self interested people are good for the economy because they lift the standard of everyone because wealth trickles down. Generally, the living standard in Britain increased and therefore people were willing and had the ability to raise children.

The empire also provided peace so that the industrialisation could prgressed so smoothly. The strong army and navy kept order in the colonies. It prevented any revolts because they knew that without the colonies, it was impossible to continue the Industrial Revolution. It would lost its raw material sources and financial sources. The army also kept Britain safe from the Napoleonic War. While all the European countries were struggling to defeat the Grand Army, Britain was safe because of its strong army and its landscape.

The British Empire and The British Industrial Revolution. (2016, Jul 14). Retrieved from https://studymoose.com/the-british-empire-and-the-british-industrial-revolution-essay 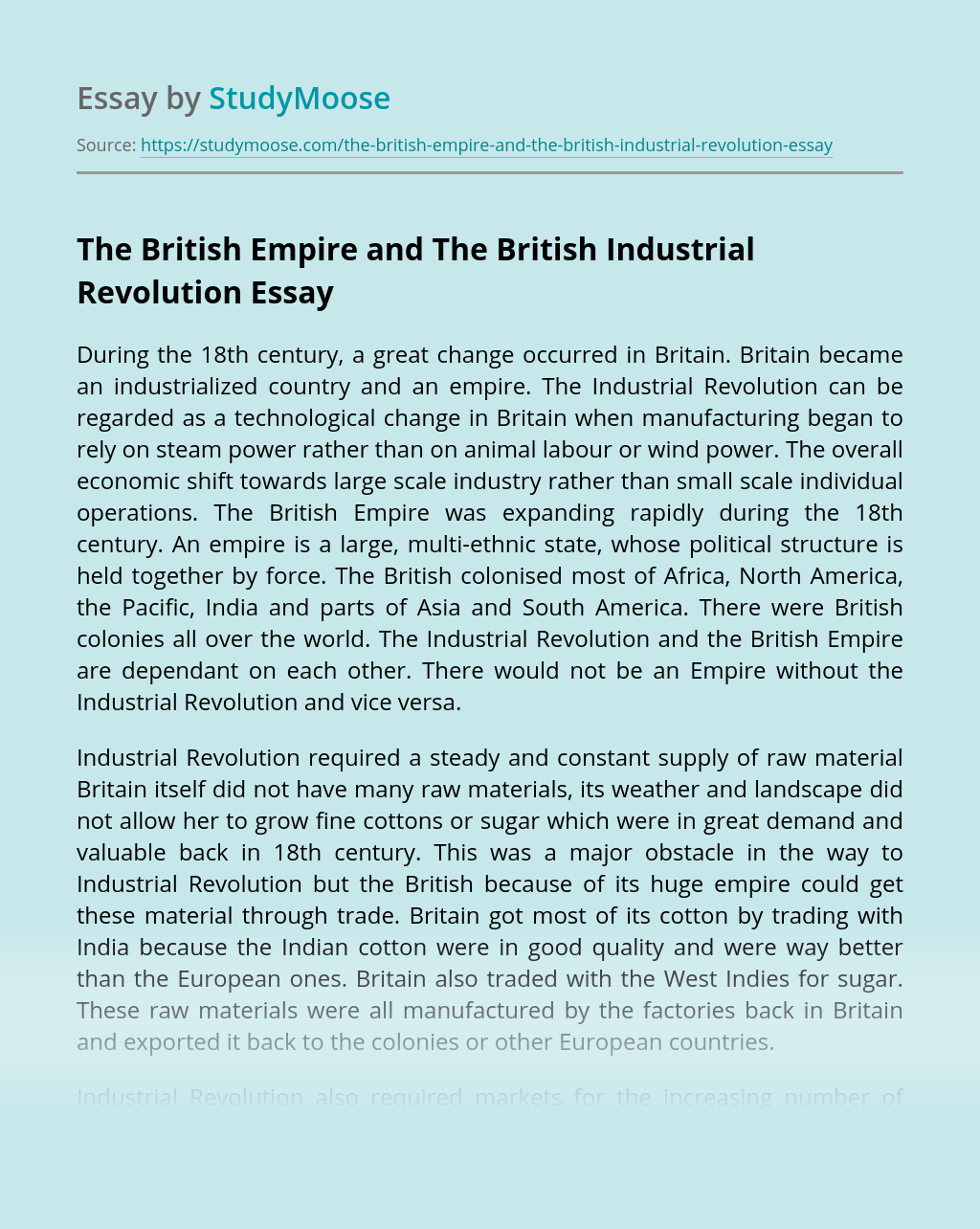