The Benefits of Hybrid Cars

There was once a time when you could turn on the news and not hear about the terrible state of the environment or the impending doom that is global warming. That time has become part of the past. The standard automobile can be blamed for a large portion of the conflict. Today’s large gasoline engines spew harmful emissions into the air every time we drive. Of course as a result, the United States government has started to resolve these problems.

Don't use plagiarized sources. Get your custom essay on
“ The Benefits of Hybrid Cars ”
Get custom paper
NEW! smart matching with writer

As a result, the United States government has been attempting to solve the environmental problem. One such solution is the hybrid electric car, which can save resources by giving off less emission. And my claim is one of the ways to assist the environmental situation is using hybrid cars. First of all, what do we know about the hybrid car? HEV’s or hybrid electric vehicles differ from standard vehicles by their source of power.

According to Michael Westbrook, who is recently retired as the manager of technological research with the Ford Motor Company, “any vehicle that has more than one power source can be classified as a hybrid electric vehicle (HEV)”(142).

The first-ever hybrid cars appeared in the middle of the nineteenth century. These primitive constructions sped up no more than 10 km/h (Westbrook, 11). The main energy that propelled vehicle was steam source. In 1905 Belgian, Henry Pieper, invents and patents a hybrid chart for a car. Ferdinand Porsche developed the idea of the Belgian inventor. A car carried the name Lohner – Porsche and was very popular at that time.

But unfortunately, in 1906 production of hybrids of System Lohner – Porsche was stopped from their unprofitability as compared to cars on petrol. A new wave of interest in the hybrid vehicles emerged after 40 years, in the early 60’s, last century. But it was just the beginning of an interest in hybrid vehicles (Westbrook, 20-21). Permanent price advances on oil and gas in the late twentieth century, and also strengthening of requirements to ecological descriptions of cars, have compelled developers again to take up developments of ecofriendly and economical motor vehicle. (Westbrook, 23) After a long time, the forgotten ideas of hybrid auto were needed designers. In 1997, Toyota began selling the Prius. Below is the example of two hybrid cars from different manufacturers. (Siler)

After two years, another Japanese company Honda produces a hybrid vehicle, which is called Insight. This car satisfied not only the Japanese market, but the US too. But already in 2000, The Toyota Prius went on sale begins to expand to foreign markets, primarily in the United States. It was a huge success. According to the magazine Forbes The Toyota Prius enters in the ten cars that changed the world and also as the most sold hybrid car in the world (Westbrook, 26-27). In the meantime, due to the progress of hybrid cars and due to the high standards to automobile companies the situation with air pollution significantly changed. The chart below shows six major air pollutants and in the first place is carbon monoxide, which is emitted by vehicles, then nitrogen oxides, then volatile organic compounds, etc. (Cooper)

But we should mention that comparisons from 1970 to 2002, the carbon monoxide in the air is so much decreased, and the reason for decreasing carbon monoxide is the hybrid car, because as we remember from the history of the hybrid cars in these years were the main progress in the development of hybrid cars. (Cooper) According to Nurretin Demirdoven’s investigation, which is the professor of Engineering System Division at the MIT, comparing the energy potency of hybrid and fuel cell vehicles, as we have with combustion engines, showed that fuel cell vehicles don’t provide more important benefits than hybrid-powered vehicles in urban vehicles in urban driving settings. There are other pros of using hybrid electric vehicle, such as: 1. Cost effectiveness. Hybrid car uses less fuel, as is able to move only the electric range by battery power. 2. Ecological compatibility. Intermittent use of ENGINES is ensured, while the electric motor does not produce harmful emissions into the atmosphere. Toyota Prius to 85 percent less polluting than the class car with traditional power installation. 3. Low noise. Electric motors are virtually silent.

Hybrid car has its drawbacks:

1. High cost. For modern technology, environmental friendliness and cost efficiency car buyers have to pay the price for its purse. 2. The complexity of repair and insufficient development of a network of service centers in selected countries. 3. Potential danger to pedestrians who often just don’t notice because they are hybrids of noiselessness. (YouManitoba) Hybrid cars are good for the environment. Hybrid cars are one among the promising types of new generation cars. Hybrid cars are more reliable than electric cars from what we are seeing to date and they have gasoline as an alternate fuel. Hybrid cars are currently more expensive to buy than conventional cars. So, we may pay more now but we should see great gains and thus yields is solving our current and long term energy needs when it comes to our people mover desires. Hybrid automobile technology has been accepted as an answer for the car pollution issues of the day. And in the end, I would like to conclude by quoting Gandhi: ”If you want to change the world, start with yourself.” Let’s change the world!

The Benefits of Hybrid Cars. (2017, Jan 08). Retrieved from https://studymoose.com/the-benefits-of-hybrid-cars-essay 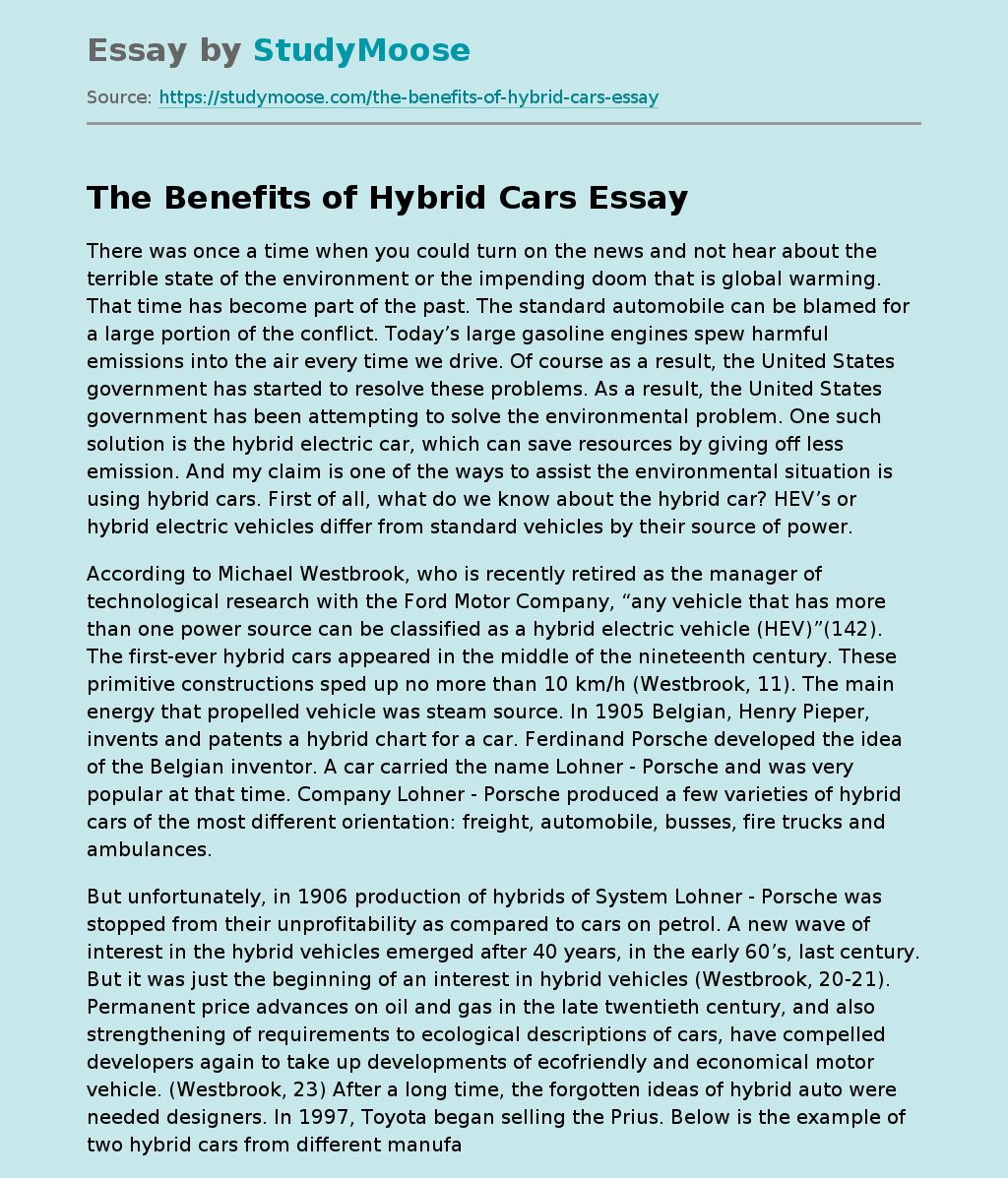