A crisis is said to be difficult to cope with, and it comes from a past or present event an individual may be dealing with. This can cause the individual to lose focus on life, depression, and intolerable difficulty wanting to do anything. An individual will have difficulty completing present and future goals if they do not have the right resources and support to assist them with moving on. This paper will demonstrate how Human services professionals use Hybrid model of crisis intervention to help lead their client in the right positive direction.

Don't use plagiarized sources. Get your custom essay on
“ Hybrid Model of Crisis ”
Get custom paper
NEW! smart matching with writer

Human service professionals should explain, lead, and direct the client. This will help to bring the clients defense down which will allow them to trust as well as explaining to the client what is going on. In this paper it will provide details about Hybrid Model, how it is illustrated, and what listening skills where applied by the counselor.

The hybrid model of crisis intervention is implemented using a series of tasks that work together in deescalating a crisis situation.

The first task of this particular model is to appeal to the client in a way that would promote their cooperation in preventing their situation from going from bad to worse and includes three courses of action, predisposition, engage, initiate contact in which the client should be informed of what the workers intentions are. Problem exploration is the second task in which the worker defines the crisis. When attempting to define the crisis, workers may find it difficult to see the problem in the same way as the client does, however this should not lead them to search too far in to the clients history for the answers but rather the occurrence’s that led to the crisis.

Most people who are experiencing a crisis feel alone and as if nobody cares and it is the job of the interventionist to change the client’s perception to that of them being the one person who does care which falls under task number three providing support, and can occur in three ways which are social, psychological and logistical.

However there are times when informational support is needed. Crisis interventionists are warned to take caution when attempting to deescalate tensed situations and is why safety is the default task. Task number four is examining alternatives. Often times as far as the client is concerned there is no other way to handle the situation and they need to be provided with only a few realistic opportunities that could help them see things differently. Much like task number four planning in order to reestablish control is task number five in which the worker explores possibilities with the client such as family, friends as well as human service professionals they have been in contact with who can be used to turn the situation around. Task six obtaining commitment serves as a confirmation to both the worker and client as to each other’s responsibilities in the matter. Following up is vital to those who have experienced a crisis and have no or very limited social support and keeps the worker informed of their progress and is usually done in hours or days (James, R, Gilliland, B, 2013).

How hybrid model of crisis intervention is illustrate

Predisposition: This is the first facet of the hybrid model in the video the counselors initiate contact by welcoming Geri into the office and letting her feel in control by letting her vent her frustrations while explaining why she is there. The counselor further helps Geri to see the interventionist as an alley by rephrasing her statements about why the school felt the need to call DCFS and Geri feeling that her daughter is fine. Problem Exploration: Second interventionists listen to Geri and ask questions that did not go too far in to Geri’s history to get all the details to define the crisis and to let her feel like she had an alley on her side. By using questions like “can you tell me more about that”, “well, what are they saying” and then by paraphrasing what Geri had said? Providing Support: Third the interventionists provided psychological support and informational support for Geri.

The psychological support was provided when they used statements like “I can tell you’re very upset, and you’re very frustrated, a lot of it concerning keep getting called by the school.” Next they provided informational support by offering to write a letter to the counselor with Geri. Examining Alternatives: Fourth after suggesting writing a letter to the counselor the interventionist examines Geris alternatives by asking her what she would like to write in the letter to the counselor. When Geri states comments that would not help her situation they suggest that it could affect her negatively. Then work on phrases that would help her not come across so negatively. Planning in order to reestablish control: Finally, Geri’s plan to reestablish control included writing a letter at home, and then returning to the interventionist to go over it with them. As well as scheduling an evaluation for her daughter.

Which listening skills the counselors exhibited

In this scenario the counselors exhibited a number of different listening skills. Throughout the session the counselors asked several open ended questions that allowed them to explore the client’s thoughts and feelings about the situation she was going through. At one point in the interview the client was asked, “What steps do you think we can take from here to make this situation better?” This question allowed for the client to explain her thoughts and ideas on what steps she may think would work for her as well as a chance for the counselors to listen, analyze, and suggest more appropriate ideas if needed. There were also many closed ended questions that were being asked by the counselors. The client was asked, “So, she’s not going to school?”

This question allowed for the counselors to get a better idea as to why the school counselor was calling home as often as they were. The counselors both conveyed understanding of the client’s frustration with the school’s counselor. Some things that they said were, “I can understand how that could feel really nerve racking…” and “I hear a lot of frustration and concern…” Conveying understanding helps the client feel like they aren’t so alone, and that they are not wrong for feeling the way that they do. There was a lot of positive reinforcement used toward the end of the video as well. The client was asked if she could write a letter to the school counselor that expressed her feelings. When the client said, “I’ll try”, the counselors praised her and told her that “trying is good.” Positive reinforcement lets the client know that they are doing well in working toward success, instead of shooting down their ideas or using negativity that can make them lose hope. The client was then asked to repeat back what she was asked to do before the next time they met again. This allowed the counselors to make sure that the client listened and was willing to take steps toward improving the situation.

A hybrid model of crisis demonstrates how a professional can conclude a positive transition for the client. Clients deal with traumatic events in their life in which it can change the course of their daily living, and can produce a lack of motivation to live. Professional will need to observe the client to educate themselves on what are the client’s strengths, weakness, short goals, as well as long goals. This can be done by using hybrid model of crisis which will include; predisposition, engage, initiate contact, and explaining to the client what is going on to ensure the client agree with the process of overcoming their crisis. The counselor in the scenario of the women losing custody of her child, demonstrated a positive description of how to communicate with an individual who is or have experience crisis in their life. By using open ended questions, closed ending questions allow the client to feel comfortable with the councilor as well as the counselor gaining understanding to what are the client needs. 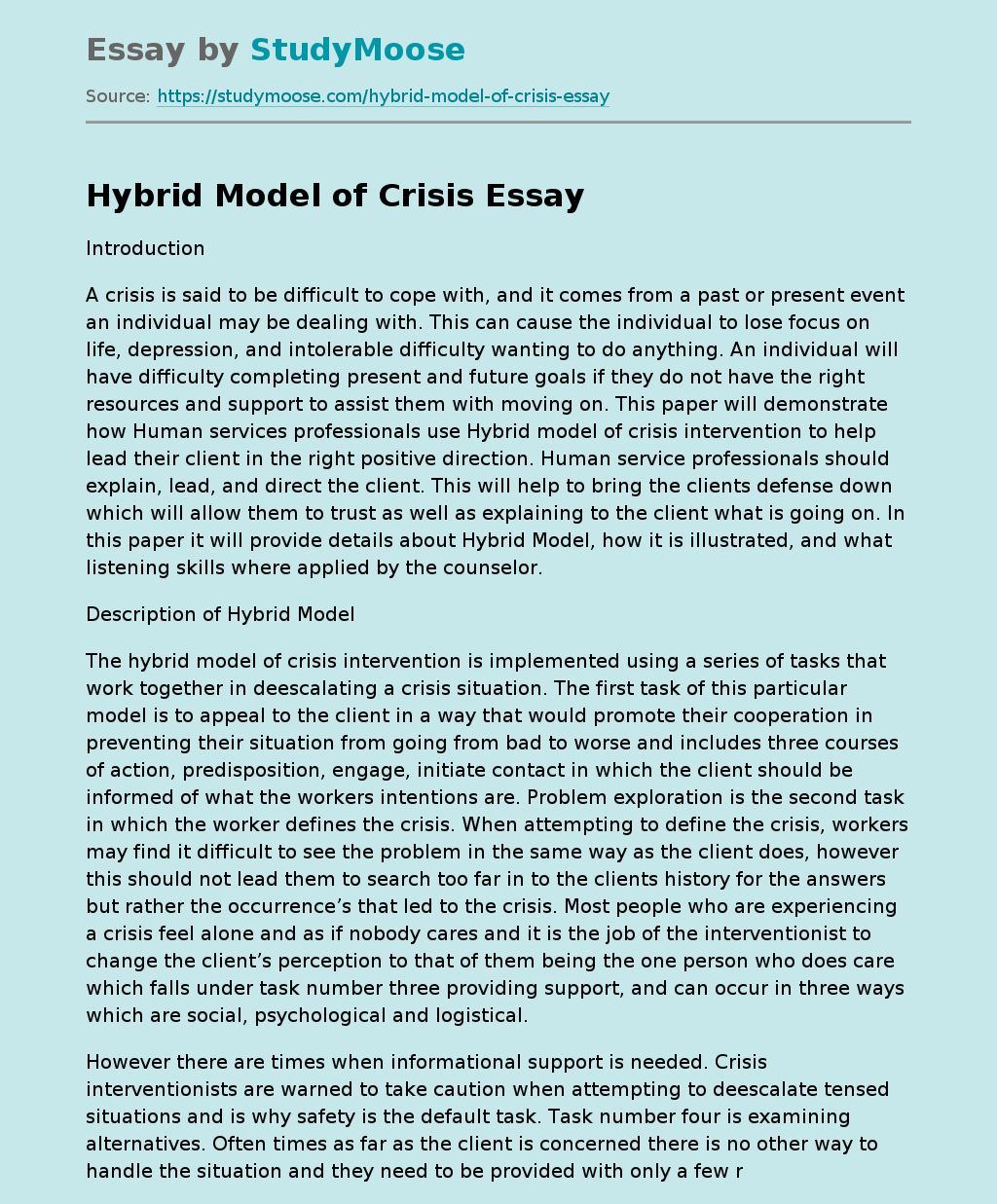