The article Feminism has given us successful girls and broken

The article “Feminism has given us successful girls and broken girls” published by Larry Kummer on July 8, 2019, explains a social phenomenon where girls’ personalities have shifted drastically to the worse over the past few decades. The summary of the article (paragraph 1,” I have two grown boys…”) shows how parents are becoming annoyed by their teenage daughters’ behavior and its typicality in American societies. Liberalism and the “need for change” social movements have led to feminism. Feminism is an ideology that fights for social rights for women.

Don't use plagiarized sources. Get your custom essay on
“ The article Feminism has given us successful girls and broken ”
Get custom paper
NEW! smart matching with writer

This has empowered women all over the world, and the article “Feminism has given us successful girls and broken girls” discusses how feminism allowed girls to fight for their rights and be considered as active and productive individuals in our societies, at the expense of their psychological well-being and mental health. I believe that feminism has caused mental health issues for girls for it is a strong social act that can seriously alter one’s way of thinking and mental state.

In the 2nd and 3rd paragraphs of the article under the heading “Girls on top of boys”, Larry Kummer points out that girls are on par and even superior to boys on every academic level, and that girls have become active participants in different sports and male programs. Kummer shares his insight by stating that girls are vocal and strong leaders in schools and other organizations. Kummer uses statistics in the 4th paragraph, “the percentage of public school teachers who are women reached a century-long record high of 77%” to show the abundance of women and their involvement academically which sheds light on the effect of feminism on social reality.

However, the author uses a statistical analysis on a report in paragraph 6, “29% of girls but 39% of boys reported that they are very satisfied with their life ·9% of boys but 14% of girls reported a level of life satisfaction equal to 4 or lower on a scale of 0 to 10.” to discredit feminism caused by liberal movements and show its negative impact on girls’ psychological health and how girls’ mental state is shifting towards the dark side of the spectrum. This means that girls are dissatisfied for certain reasons regardless of their granted positions academically and in sports and their continuity in having success due to feminism. This phenomenon can seriously impact societies in many ways to an extent where men might become even unhappier with their social positions while women thrive for achieving equal rights and higher positions in different domains which does not seem to satisfy them.

In paragraph 9 of the article “Feminism has given us successful girls and broken girls” under the heading of “Girls’ mental health is breaking down”, Kummer integrates a study to show the differences in mental health between boys and girls. The content of the study proves that girls are more likely to develop mental health disturbances than boys. Statistics and statistical analysis in the study are generally what the author used to show numbers and analyze them to make his point and how mental breakdowns and anxiety can increase the rate of self-harm and suicide attempts for girls. Kummer tries to give reason for such problems by using research data in the 11th paragraph of the article (“A good starting point for information·”) to explain the process of acquiring psychological problems starting from infancy and what factors during different time frames of a child can cause them to develop mental health concerns discussed in paragraph 9 of the article. The survey makes a good point and supports the author’s claim by stating that societies’ orientation and a child’s psychological health are of opposite trends. Societies are developing while a child’s mental well-being is regressing, and that is an unfortunate fact that cannot be denied. The data fails to explain the relation between children and social changes and why kids are the most vulnerable, but the author seems too certain of societies’ impact on a child’s mental health.

To conclude, feminism is a strong social movement that affected millions of female and even male lives all over the world. One cannot deny that an ideology as strong as feminism can severely change the way one might think and in turn, alter one’s mental being. I believe that the article “Feminism has given us successful girls and broken girls” made a strong point of proving feminism’s role in developing mental health breakdowns for girls by stating different types of evidence that are sufficient in number and in variety. Feminism, as proven by the author, severely impacts women’s personalities although provides them enormous opportunities to succeed in any society. Thus, for women, opportunity seems to come at the expense of their mental health.

The article Feminism has given us successful girls and broken. (2019, Dec 03). Retrieved from https://studymoose.com/the-article-feminism-has-given-us-successful-girls-and-broken-example-essay 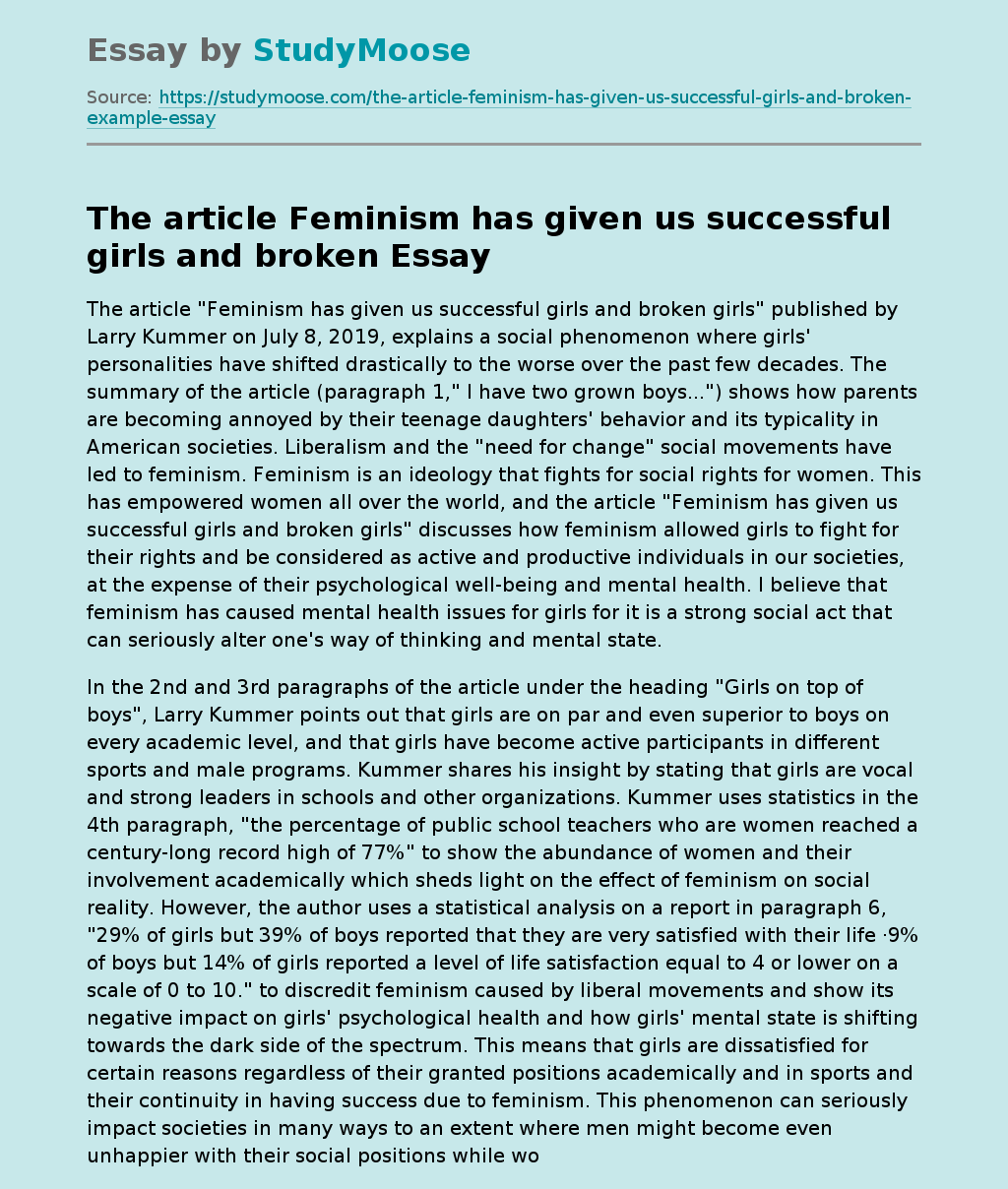