The Art of Relief Printmaking

In the modern, contemporary world we are living in, printmaking can be seen in almost every detail of advertisement and visual aids. Newspapers are the probably the most prevalent of all, showing the wonders of printmaking in creating duplicate patterns and texts over and over again. Political statements, books, posters and several photographs can also be included in the list of various materials presented by printmaking. But this technique was not isolated to the nineteenth and twentieth century.

The art of printmaking has been alive as early as the fifteenth century, as suggested by prints and artworks documented by the Metropolitan Museum of Art.

Don't use plagiarized sources. Get your custom essay on
“ The Art of Relief Printmaking ”
Get custom paper
NEW! smart matching with writer

The technology was discovered at around 1400, resulting to the first publication of books, increase in knowledge dispersion, and rise of engineering images scattered everywhere. Aside from being a simple tool of duplication and copying, printmaking also paved its way into the world of art, and many artists took this seriously, and added it into their palette of techniques in creating aesthetically wonderful images.

Today, there are many ways, or approaches to printmaking. One of the most striking and common of these is the relief printmaking. It became a favorite of many because it does not require expensive materials and is accessible to almost everyone who is willing to learn the craft. In fact, during the olden times, those without a press used this technique in publishing and replicating their images (Stobart, 2001).

Relief printmaking is sometimes called the “art of the white line” because of its ability to use ink or paint to color the background, and not the foreground or subject itself (Walker, 2005).

The concept of this technique lies in creating a stamp or woodcut that would allow the image of interest to be at a level lower than the background. The lowered surface stays free of ink and would be colorless, or white when imprinted on the paper.

To be able to do this, the artist first creates an image on a piece of material that would be cut afterwards. This material can range from wood to rubber, each having varying hardness and thickness. Some wood, like maple and cherry, are considered hardwoods and can hold details very well. They are, however hard to cut, and the cutting tools need to be replaced or sharpened frequently (Walker, 2005). Some, such as plywood, are much easier to cut but would easily be worn out after frequent use. Still others are of synthetic materials, such as linoleum which is from a mixture of powdered cork, rosin, and linseed oil (Walker, 2005). The material to be used would vary greatly, depending on the artist’s style, skill, and discretion.

The image would then be traced down and cut. Once finished, a coloring medium is then applied evenly to the raised surface of the block using a roller or any similar tool. A paper or the final printing sheet is then laid on top of the block and rubbed with a special tool, called the “barren” to transfer the print. A spoon is sometimes used in the rubbing of the print (Walker, 2005). The final outcome would then be a print of a colored background and a white-stressed image.

A very nice example of a print that would best describe the final images using this technique is the work of Mandy Bonnell entitled “Patterned Tongue Sole.” This was from a wood engraving of a Kenyan coral fish (Stobart, 2001). This is a small piece, just about 6 cm high and 14 cm long. In here, the artist used relief printing by etching the outline and details of the fish out from the wood. Those parts were then left untouched by the ink, and the whole body of the fish turned black.

The details and outline stands out from the black body due to its contrast, and its gives a feeling of brightness to the outline of the fish. Also, the artist also created some background effects for the fish. A lot of white parallel lines can be seen in this art, created by cutting thin sections of rectangles and removing it, creating a narrow space that would resist the ink applied to the block. This work by the author is a good example of creating an image using the “white line” as described above. It is as almost as drawing the fish using a white inked pen on a black sheet of paper.

Another work, this time by Albrecht Durer, uses the same technique of relief painting but achieves an opposite effect to the white line drawing of Mandy Bonnell. The artwork “Death and the Lansquenet” was also created as a woodcut, using only a knife (Walker, 2005). This image shows two beings, a skeleton wrapped in rags giving an hourglass to a lansquenet. The strokes of this piece were very intimate, and the bodies of the two subjects were full of details that were carefully etched to produce a drawing-like portrait. In fact, the whole image looks like it has been drawn with a black ink. In contrast with Bonnell’s fish, Durer used relief painting to make the black lines work as emphases to the subject’s outline and details.

Durer did the opposite, and instead of carving out the outlines, he left them instead and carved out the insides of the subjects. In doing so, he allowed the outlines and intimacy of the image to be soaked in ink, and thus transferred to the printing material. The background, since created at a level lower than the others, remained white. Compared to Bonnell’s fish, the “Death and the Lansquenet” would have required more work, and more time to complete. It would be easier to remove small details than etched out the big background, like what Durer did. But, aesthetics alone, both pieces used the contrasting black and white colors effectively, making their subjects stand out in the image.

Relief printmaking is not isolated alone to the use of ink in printing. A lot of artworks used this technique and incorporated several hues and shades to create more colorful images. The artwork “Ring Net Fishers” displays the wonders of multi-color relief printing. This print was made by Gertrude Hermes, and is a lot bigger that the prints above (Stobart, 2001). With a size of 56 by 76 cm, this artwork is really an outstanding work, filled with dedication and desire to complete.

Upon first glance, the artwork seems like an abstract painting, with hues of violet to purple and a lot of black strokes everywhere. However, this piece used the concept of relief printing, using linoleum as the material where the print was cut. The different colors were result of using various inks and paints in the printing process. In this artwork, the artist used three colors separated by three printings. First, the background was laid with a dark violet color, and then another lighter hue was applied for some details, then finally black ink was used to create the outlines of the image. Using different colors add to the depth and interest of the piece, as seen in Hermes work.

Another thing to notice about Hermes is her cutting technique. Compared to Durer and Bonnell, Hermes’ cutting stroke gives her images a dynamic feeling, filled with different textures and feels. The print shows an almost fluid motion, probably a single stroke in making the outline of the design.

Relief printing is surely making its way into modern art. Aside from the regular artworks made solely through printing, a lot of fields have also opened their doors into this technique. Now, relief printing can be seen combined with different print media. These would include painting, photography, sculpture and installation art (Westley, 2001). Relief printing can also be seen in many posters, for they are quick and inexpensive ways to duplicate announcements and advertisements. All in all, relief printing, which started as simple publication technique, is continuing to be a promising idea in the field of arts and society.

The Metropolitan Museum of Art. (2008). The printed image in the west: History and techniques. Retrieved March 29, 2008, from http://www.metmuseum.org/ toah/hd/prnt/hd_prnt.htm

The Art of Relief Printmaking. (2017, Feb 19). Retrieved from http://studymoose.com/the-art-of-relief-printmaking-essay 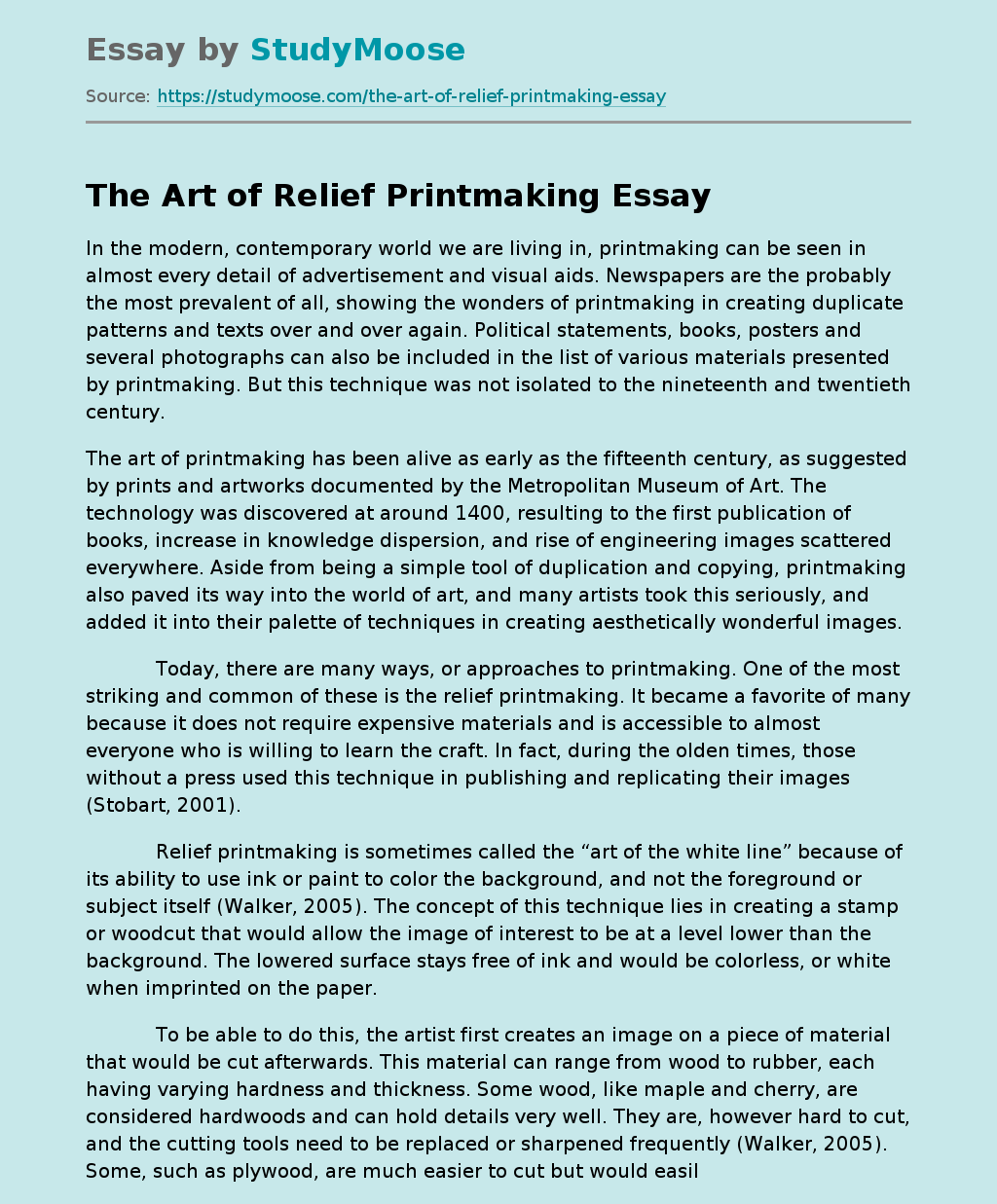