Texting and Driving Is Deadlier Than Drunk Driving for Teens

Did you know that texting and driving kill more teens than drunk driving accidents? This is important for our generation because cell phones are everywhere. According to the article, The Very Real Dangers of Texting and Driving by technology entrepreneur Mike Taggart over three thousand teenagers die each year in car crashes caused by split attention due to texting and driving. Texting and driving first became a problem in the 1990s when text messaging was introduced. Then in 2002, the number of text messages per year skyrocketed from 1 thousand to 110 million.

Don't use plagiarized sources. Get your custom essay on
“ Texting and Driving Is Deadlier Than Drunk Driving for Teens ”
Get custom paper
NEW! smart matching with writer

When this happened the number of crashes doubled. Texting and driving are like having the man of your dreams in the back of your car and you being unable to look away.

In the article, The Very Real Dangers of Texting and Driving the writer says texting and driving are dangerous because it requires a driver’s visual, manual, and cognitive attention. Another thing he says is that sending or receiving a single text message can keep a driver’s eyes off of the road for nearly five seconds which is the equivalent of driving the length of a football field with one’s eyes closed.

Even though a text message may seem harmless it can cause permanent damage to someone’s life. Michael Taggart also says that 10% of all drivers ages fifteen to nineteen years old involved in fatal car crashes were reported as distracted drivers. This is because members of this age group are heavy users of cell phones and are far more likely than older drivers to text or send emails while driving.

The article Distracted Driving Overview by the National Highway Traffic Safety Administration gives examples of texting while driving. One example of this is when twenty-one-year-old Elizabeth Meyers was arrested in Maryland and fined $500 and probation for killing a motorcycle rider as a result of texting and driving. Another example is the case of Jonathon M Raynes, he was found guilty of manslaughter in the death of twenty-four-year-old Miranda Hamilton in a head-on collision which then caused her to fly right out of her vehicle. A third and final example is of eighteen-year-old Aaron Deveau who was convicted of homicide as a result of texting and driving. In each of the examples, it shows how texting and driving ruined the lives of both the driver and an innocent person.

To conclude, the use of phones while texting and driving causes endangerment of not only yourself but also others. Some ways we can reduce the number of people texting while driving is by enforcing laws and making punishments more severe. Some ways you can avoid texting and driving are turning your phone off so that you wouldn’t be tempted to look at it, putting it somewhere you can’t reach it so it can’t bother you while driving, or you can set up a system on your phone that does not allow your phone to send or receive text messages while in motion. Another thing you should do is remember that there is people who care about you so it is better to not text while driving.

Texting and Driving Is Deadlier Than Drunk Driving for Teens. (2020, Sep 10). Retrieved from https://studymoose.com/texting-and-driving-is-deadlier-than-drunk-driving-for-teens-essay 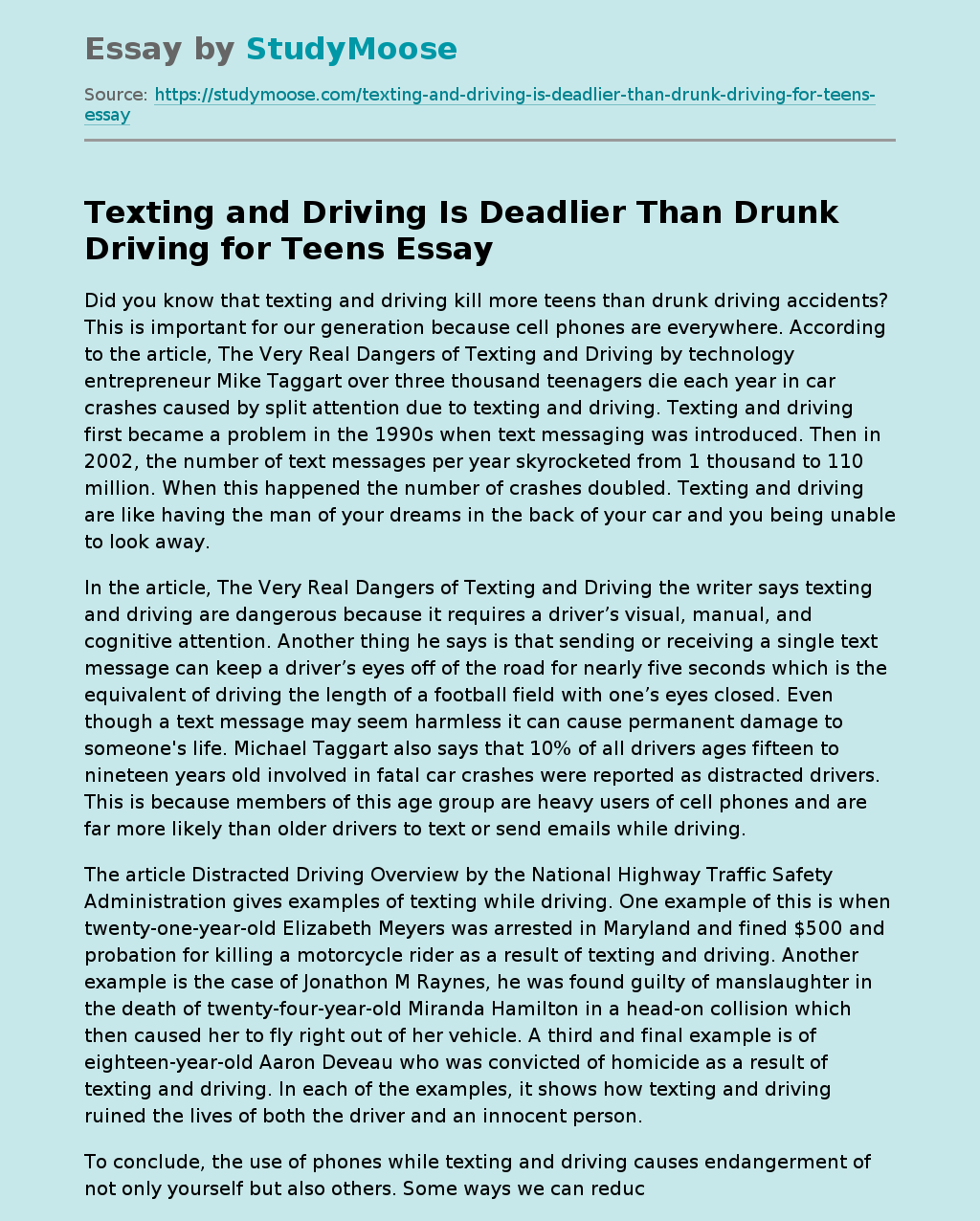