The tragedy of September 11 2001 (9/11) indeed shook the world and the waves of that quake are still being felt today. The terrorist attacks on the United States of America caused the highest death toll in the USA by any singular event since the Civil War. Approximately $3,000 people were killed including the hijackers, passengers on the commercial jets, victims at the World Trade Centre (WTC) and the Pentagon. The hijackers targeted the ultimate symbols of US economic and military power. Although the physical damage caused was limited to a national level in the USA, the effects were truly international.

Don't use plagiarized sources. Get your custom essay on
“ Terrorist Attacks 9/11 ”
Get custom paper
NEW! smart matching with writer

The World Trade Centre was an integral part of the New York financial sector and represented not only American interests but those of other countries around the world. The physical collapse of the towers initiated an economic collapse of global proportions. 9/11 not only caused loss for Americans but nationalities of the world.

Terrorism is often defined as unlawful actual or threatened use of force or violence by a group or person against people or property with the objective to intimidate or coerce societies or governments, often for ideological or political reasons.

Terrorists and their supporters have cleverly found ways to fund their missions. Terrorism is funded by both private and state sponsors. An example of private sponsoring is that of the case of Khalid Sheikh Mohammed, the man behind 9/11. The US government has identified several countries they claim are state sponsors of terrorism including Saudi Arabia, Cuba, North Korea, Syria and Iran. Terrorism is also financed through money laundering and the abuse of non remittance systems like Hawala which are unlicensed and unregulated.

In response to 9/11, then newly elected US President George W. Bush and his administration pledged to avenge the attacks and prevent others by bringing about a war on terrorism. Bush warned that those countries refusing to join their fight or those continuing to allow terrorist cells to reside in their country would be treated as hostile regimes. The aftermath of the attacks and Bush’s mandate reignited legislative reform around the world. Prior to 9/11, there was already movement towards standardization of anti-terrorism legislation around the world with the Terrorist Financing Convention of 1994 but 9/11 added significant momentum to the reform. In order to maintain internal security, promote and restore economic stability, hastening the enacting of anti terrorism legislation was very necessary. The most notable of these legislative attempts at preventing and punishing terrorist activity are those of the United States of America, the United Kingdom and the United Nations. All of these legislative responses realize that the most effective way of preventing terrorism is cutting it off at the stem, in other words stopping its funding.

The mass creation of law, changes in banking procedure, and wavering of global economy are evidence to support Davis’ supposition that 9/11 had a galvanizing effect on the world. Here the effectiveness and appropriateness of the financial legislative response to 9/11 will be discussed.

The US response to September 11 was understandably swift. The USA Patriot Act 2001 and the Presidential Executive Order 13,224 were enacted and signed shortly after the events of 9/11. Both pieces of legislation sought to undermine and identify terrorist activity by blocking acess to the international financial system.

Presidential Executive Order 13,224 designated 27 groups and individuals as suspected terrorists and as a result blocked and froze their assets. The Order also covers the blocking of assets belonging to individuals and entities “materially” supporting terrorists.

The USA Patriot Act is a highly controversial piece of legislation which extends the reporting requirements already imposed upon financial and credit institutions beyond and including those set out in the Banking Secrecy Act 1970. It obliges financial institutions to file a suspicious activity report (SAR) with FinCEN on transactions falling within prescribed thresholds and when transactions result in funds being sent to or from specially designated groups, individuals or locations excluded by Presidential Executive Order 13224 or any other list.Title VIII of the act contains provisions that attempt to prevent and punish activities that appear to support or finance terrorism. In this title, US forfeiture law was extended to allow authorities to seize assets both foreign and domestic belonging to any group or individual caught plotting to commit acts of terrorism against the USA or its citizens. Assets may also be seized if they have been acquired or maintained for the purposes of financing of terrorist activities.

The international response to 9/11 was significantly influenced by the US but ultimately must be led by the UN in order to obtain a coordinated and effective level of international cooperation. Prior to 9/11 the UN produced the Convention for the Suppression of the Financing of Terrorism which incorporated measures aimed at stemming the movement of funds belonging to suspected terrorists and served as a precedent to UN Security Council Resolution 1373. The resolution imposes 4 obligations on Member States, requiring that they (a) prevent and control the financing of terrorism; (b) criminalize collection of terrorist funds in state territory; (c) freeze assets of people who terrorize or plan to terrorize.

Terrorism is not a strange threat to the United Kingdom as it has had to deal with attacks from the Irish Republican Army (IRA) long before Al Qaeda became an issue. Because of this, the UK had already implemented anti terrorism legislation. The Terrorism Act 2000 created 5 terrorist finance specific offences which include (a) fundraising; (b) use and possession of terrorist purposed funds; (c) funding arrangements; (d) money laundering and (e) failure to disclose information. However, the effectiveness of TA 2000 has been quite difficult to measure since the Government radically changed it after the 9/11 attacks. Shortly after the ATCSA 2001 was enacted with the purpose of preventing the floe of terrorist financing. It enabled the HM Treasury to freeze assets when a suspicious transaction was being investigated and extended the grounds for the filing of SARs. The powers of the UK regarding the freezing of assets and reporting requirements are identical to those of the US yet the US comes under more fire and criticism for their legislative response.

The purpose of a SAR is to report and provide information to the relevant authority within a particular state, on the transfer, deposit or withdrawal of funds of a specific threshold that qualify as suspicious. The Internal Revenue Service (IRS) describes the SAR as are “one of the government’s main weapons in the battle against money laundering and other financial crimes”. The purpose of the reports is to help provide leads for initiating money laundering investigations. These are important because it is known that money laundering is a popular and common way of financing illegal activity including terrorism. The threshold on which countries file SARs are unique to each country.

However, the effectiveness of SARs has come into question. It is seemingly impossible to muddle through the millions of SARs reported daily or weekly and pick the needle from the haystack. Further humiliation of the SAR occurred in the July 7 attacks in London where the price of the bombs fell way below the SAR threshold at £100 – £200 pounds.

Another problem facing the effectiveness of the trend in legislating against terrorist financing is the prevalence of cheap terrorism. Cheap terrorism describes terrorist attacks whose damage and impact exceeds the cost of carrying out the attack. Examples of cheap terrorism include the Bishopsgate bomb in London in 1993 that cost 3000 and caused about 1 billion pounds worth of damage. Loretta Napoleoni notes that it is no longer necessary for terrorists to spend large amounts of money in plotting because they can do a small attack and create a large amount of hysteria.

The absence of on soil attack since 9/11 on the USA seems to some, proof of the effectiveness of the new legislation criminalizing terrorist financing. It has been just a little over 6 years since the attacks on the WTC without any further attacks on US soil. This however, should not be construed too convincingly as proof of effectiveness of the legislation. A total of 8 years expired between the 1993 attacks on the WTC and the 2001 attack and it should be noted that measures were implemented to prevent another bombing after the 1993 attack. Also, even after bringing into force ATCSA 2001, which has similar effect and clauses as the USA Patriot Act 2001, the UK still suffered an attack on July 7 2006. There seems to be no adequate way in measuring how effective the new measures are in preventing terrorist attacks. The most concrete evidence of effectiveness would perhaps be the capture and arrest of terrorists while plotting or about execute. Surely an effective means of legislating would have prevented subsequent attacks.

The appropriateness of the legislative response is also questionable. The US press has given terrorism an Islamic face and faith, detrimentally affecting the perception the Islamic population of the country. ‘Islamophobia’ as it is called, is so prevalent that in a Gallup pole, 40% of Americans polled said that they were prejudiced against Muslims and 39% felt that US Muslims should carry special identification. This racial profiling extends beyond the media to law enforcement and the blocking of charities benefiting Islamic terroritories. Sadly there is no recourse for individuals or groups unjustly affected by this as the Supreme Court upheld that racial profiling when done for reasons of national security is lawful. 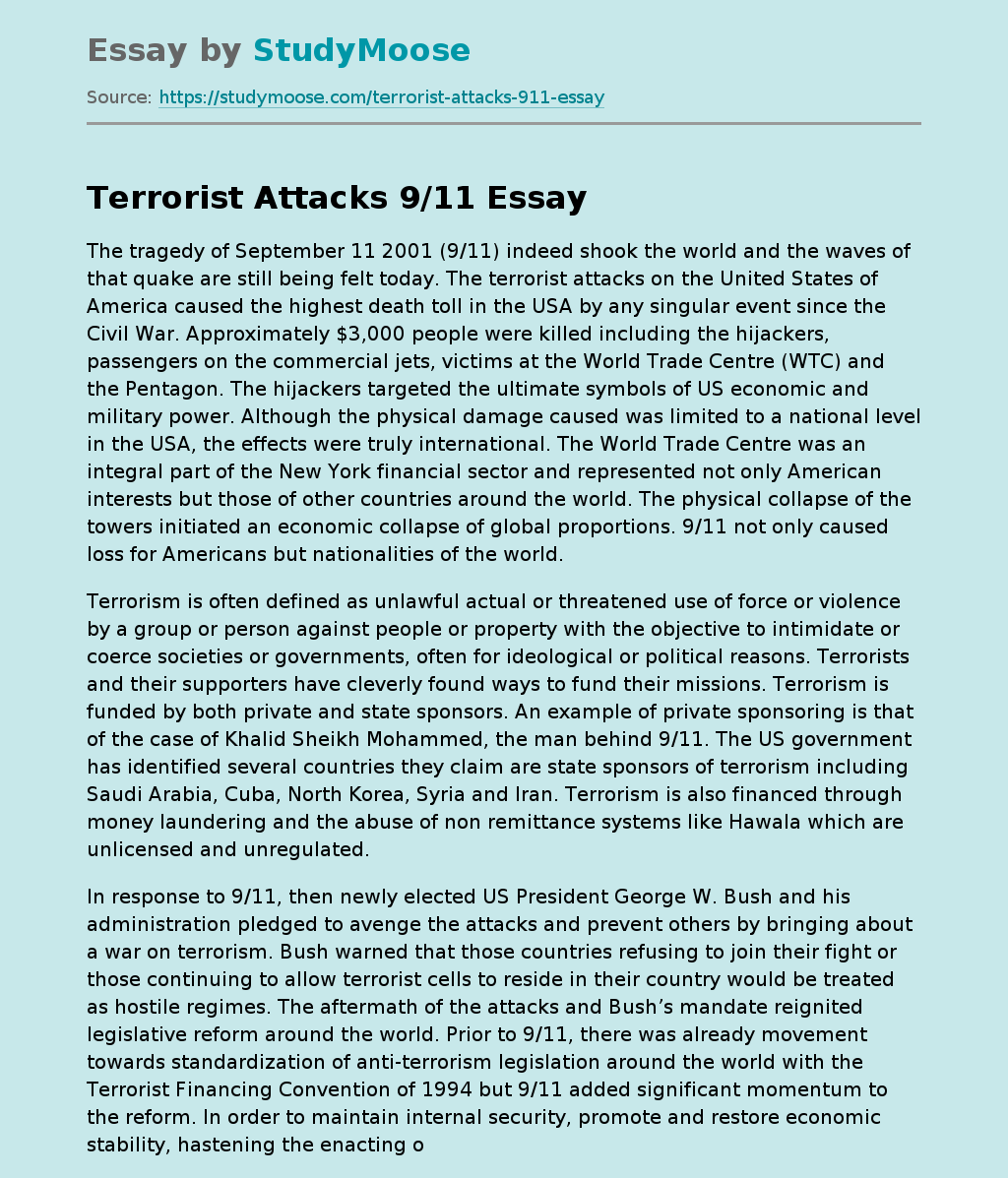