René Descartes, a famous philosopher, once argued that, “animals are not sentient- they are machines, like mechanical clocks, devoid of feelings and incapable of experiencing pleasure or pain” (Vaughn). Today, unlike Descartes, most people believe that animals are intrinsically or instrumentally valuable, also, whether they have or deserve any rights. Defining what cruelty is has been very subjective. To some people. An animal is just property and they can beat it around as much as they want, to others, animals are part of their family and they would never lay a finger on them.

Don't use plagiarized sources. Get your custom essay on
“ Legislation for animal cruelty ”
Get custom paper
NEW! smart matching with writer

There is legislation against animal cruelty but because there is so much subjectivity, the legislation fails to deter people from abusing their animals. For there to be equal justice for animal cruelty people must agree on a completely objective definition of what is cruelty and what is not.

The law defines companion animals as “any animal that is kept inside a residential dwelling and any dog or cat regardless of where it is kept: (Ohio Cruelty). The law does not consider any livestock or wild animal as a companion animal. The legislation then goes into what it considers cruelty, torture, or neglect. The punishments outlined in the law include jail time, fines, and the removal of their animals.

The one thing that is not counted for in this legislation is the emotional ties to the animal.

Every person is emotionally attached to their animal in a different way. There is no real objective way to measure how much an animal means to a person. Just because a person is emotionally attached to their animal, that does not mean that they will not commit any act of cruelty against their animal. It is said that Michael Vick claimed to love his dogs even though he subjected them to fog fighting. It is possible that in him mind he truly believed he cared for his doffs. In less extreme cases, a person could love an animal but still strike it when it was bad, In their mind the dog was bad so it deserved to be beaten,. They just do not see that as being animal cruelty.

Most people believe that it is wrong to be cruel to animals. Within different societies, animals are treated differently. Depending on how and or where a person was raised, an animal could be a loved pet that is part of their family, or they could just treat it as property and a tool that is just there for their personal use. According to Ohio law if a person owns a dog then it is considered a companion animal, no matter if it is kept in their residential dwelling or not. IN one situation the owner keeps their dog in their house and it is a part of the family. They treat their dog like a baby, petting, playing, and cuddling with it. In another situation the owner keeps their fog outside and uses it as a watchdog. The only interaction with the dog is just checking to make sure it has food and water, and maybe a quick pat on the head, and gives it a “good dog” praise. It is quite easy to see that he first person loves their dog. It is not so easy to tell in the second situation. They may truly love their dog and that was how they were raised to treat it. They could also have emotional attachments to the dog, such as being proud, without really caring about the dog. Kind of like my dog is bigger than your dog pride. Within the law both situations are considered equal, even though they are unequal in the emotional attachment to their animals.

Living in Ohio we are familiar with the Amish culture. They live a more simplistic life without modern technologies, usually farming. Amish are known for their horse-drawn buggies that they use to get around. They also use horses to help on the farm. To some of them, horses are merely a tool and once the horse gets too old and can no longer do what they need it to do, the kill it, To them that is just the way it is, they do not consider that being cruel, People outside the Amish lifestyle have tried to come in and rescue the horses so that they can continue to live, even though they cannot work anymore.

Amish are also known for owning ‘Puppy Mills’. Puppy mills are breeding kennels in which dozens, or even hundreds, of dogs are allowed to live in small cages for their whole life, as long as they are given the basics, food, water, and shelter. (Puppy Mills) These mills are not illegal. Some of these Amish-owned [puppy mills treat their dogs very poorly. “The Amish say they raise dogs much as they would any other livestock, restricting the dogs to small cages and killing the parents when they are no longer productive” (Hinds). To most people this sounds horrific because they consider them to be companions, not livestock.

Animal cruelty is subjective, and that is why legislation is not working to stop it, there needs to be an objective measuring system to measure an animal’s current welfare. There is debate to what standards need to measure and of what weight to put on each of the standards. The one thing that is known is: “Defendable animal welfare standards require scientific knowledge about animal biology to determine their physiologic, health, environmental, an behavioral requirements. However it is important to note that ethical or value-based judgments provide the underpinning for the scientific questions posed” (Millman). By looking at an animal’s physical behavior, and other factors, and comparing them to the standards, the welfare of the animal can be determined. Millman was talking about measuring the welfare of livestock. The same theory can be applied to companion animals as well. If there are things that [people can look at to determine objectively that an animal is being related cruelly, then legislation will be able to be written that will apply to everyone and will work in every situation, no matter the emotional connection to the animal.

Once there is an objective way to measure animal cruelty, the public need to be educated about it. IF more people know what exactly counts as animal cruelty, then they will be more likely to report it. Currently, shows like Animal Cops: Houston bring animal cruelty out of the shadows and show the public that animals are really being abused and that people do get punished for their actions. The Houston Society for the Prevention of Cruelty to Animals is just one of the numerous societies in the U.S. that are fighting against animal cruelty. It is said that “The HSPCA receives over 10,000 reports of animal cruelty or neglect each year” (About Animal Cops: Houston: Animal Planet). People need to be aware of animal abuse to be able to report it. “Without phone calls from concerned citizens, officials wouldn’t know about most instances of animal abuse. IT all comes from the public” (Maloney).

Once people report cases than the people can actually be punished for their actions. In Ohio, Whoever violates the current animal abuse law can be convicted of a misdemeanor of several degrees, and possible a felony of a certain degree. The punishments include jail time and fines, along with the removal of the animal from the convicted person.

Some people do not think that the current punishments are fair for the crimes committed. One study gave people different scenarios and asked them to rate the punishment that was given. The Study showed that people were speciesist and chose harsher punishments for abuse on certain animals like puppies as compared to other animals such as chickens. The study found that the most important factor of the punishment was restricting the perpetrator’s ability to adopt an animal in the future. The study also found that the crime type (abuse or neglect) and the crime outcome (life or death) were not strong variables of punishment ratings (Sims). In Some cases, the abuse or neglect of an animal was just because of ignorance. IN those cases the person usually would just be educated about the proper treatment of animals and would not be punished, unless they were found to have not changed and still committed the abuse even though they knew it was wrong. Each crime is different and is judged by different people so the perpetrator’s punishment tends to vary a bit. IF there was an objective way of identifying animal cruelty then it would be easier to make punishments fairer.

The key to fairly assessing animal cruelty is being able to objectively identify it. Once it becomes objective, emotional ties will not determine what is cruelly. People then need to be aware of what is considered animal cruelty and report it when the see it. After that the crime can be fairly punished. 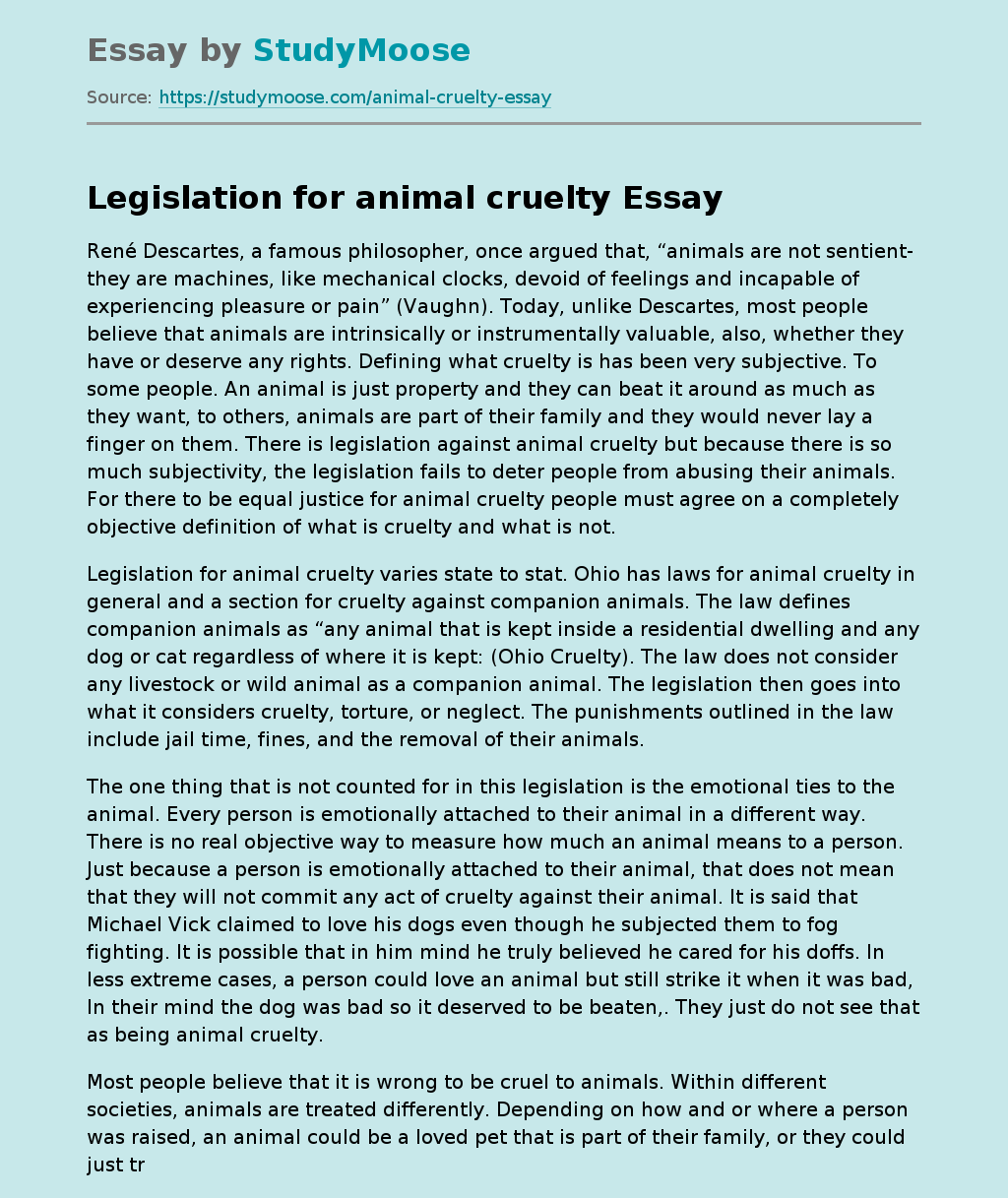