1 Summarise key aspects of legislation, regulatory requirements and codes of practice relating to own role and responsibilities

As a trainer I would need to understand my own roles and responsibilities, with a necessity to understand the key aspects of legislation, regulations and codes of practice. As a trainer who works in a volunteering field which falls within a section in Children Services in City of Cardiff county council and Vale of Glamorgan County council I would need to have a basis of knowledge identifying the following:

A Legislative requirement being a duty to act according to the law as defined by an Act of Parliament and/or Welsh Assembly Government and these are usually enforceable through the courts.

Don't use plagiarized sources.
Get Your Custom Essay on Summarise Key Aspects Of Legislation Just from $13,9/Page

The legislation which would be considered whilst taking any training session would include; Health and Safety at Work Act 1974, Data Protection Act 1998, Equality Act 2010 and Children’s Act 1989 and 2004.

The Equality Act 2010 simplifies the current laws and puts them all together in one piece of legislation. Also, it makes the law stronger in some areas. So depending on your circumstances, the new act may protect you.

Relating to the Youth Offending Service when training Youth Volunteers, I would also need to train them on legislation which brought about the creation of that particular service and their Volunteering roles. This includes; Crime and Disorder Act 1998, Youth Justice and Criminal Evidence Act 1999, Criminal Justice and Immigration Act 2008, Legal Aid, Sentencing and Punishment of Offender Act 2012.

Code of Practice in the sector I work within would usually be determined by the County Council I am representing and these are the set of rules which outlines how any person who is representing that particular County Council either as a member of staff or/and Volunteer are expected to conduct themselves.

The code of conduct usually is based on an implementing legislation passed from the UK Parliament and/or Welsh Government and sets guidelines on how emplyees and anyone who is representing that particular organisation.

Statutory code of practice: A Code of Practice approved by Parliament and admissible as evidence in any legal action.

When identifying needs and planning and developing the training, these pieces of legislation and the Codes of practice would need to be considered prior to and during training and also whilst reviewing future training.

This could be done as part of the identifying needs part of the teaching learning cycle through a pre course assessment form which could be annoymised, so not to breach any confidentialities.

Summarise Key Aspects Of Legislation. (2016, May 30). Retrieved from https://studymoose.com/summarise-key-aspects-of-legislation-essay 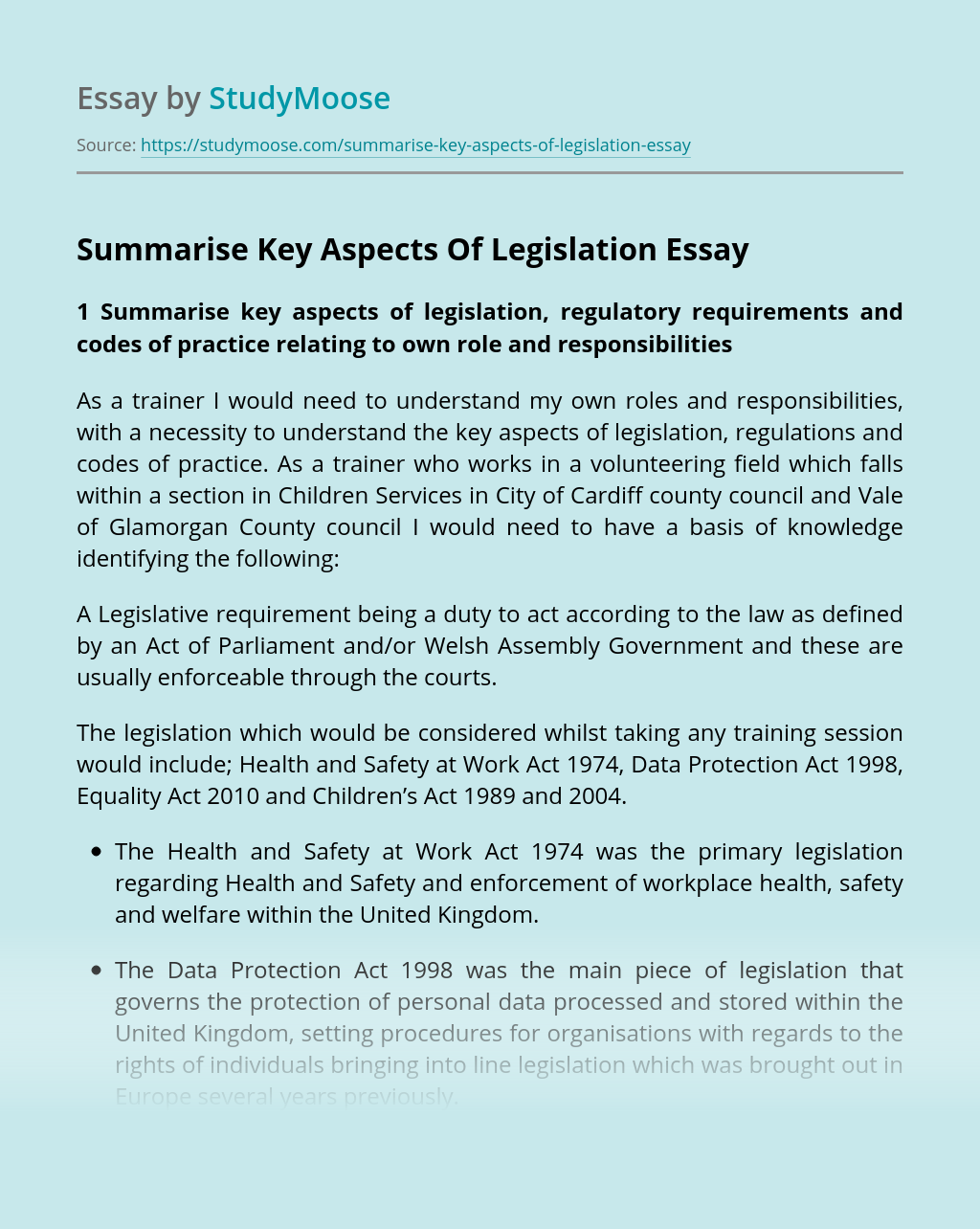 Effectiveness of Ra 8049 or Anti-Hazing Law

Under the Anti-Hazing Law, hazing is defined as “an initiation rite or practice as a prerequisite for admission into membership in a fraternity, sorority or organization by placing the recruit, neophyte or applicant in some embarrassing or humiliating situations such as forcing him to do menial, silly, foolish and other similar tasks or activities or...

An e-fraud is considered to be an electronic crime that affects not only individuals businesses and governments but also allows for very negatively intelligent people and hackers to use their intelligence to log into other’s accounts use their credit card numbers and banking password and transact huge amounts of trade and money. It has been...

Disability Discrimination, Employment Law Introduction        The employment law governs the duties and rights between employees and employers and are also referred as labour law. The rules are largely designed to keep the workers safe as well as ascertain that they are treated reasonably within the workplace. In addition, the Employment Laws are...

1 Summarise key aspects of legislation, regulatory requirements and codes of practice relating to own role and responsibilities As a trainer I would need to understand my own roles and responsibilities, with a necessity to understand the key aspects of legislation, regulations and codes of practice. As a trainer who works in a volunteering field...