The purpose of this briefing note is to provide recommendations for Metapath Software Corp. (“Metapath”) on its financing offers received in September 1997. These two offers came from 1) a fund consortium led by Robertson Stephens Omega Fund (“RSC”) and Technology Crossover Ventures (“TCV”) and 2) CellTech Communications (“CellTech”), a vendor of wireless technology which had recently gone IPO.

Metapath has made good progress in developing its business since its inception – generating $6.4m revenue in the September quarter of 1997 with representation of three large customers.

Don't use plagiarized sources. Get your custom essay on
“ Metapath Case Report ”
Get custom paper
NEW! smart matching with writer

However, with the ambition to win a good chance of IPO within the next two years, more capital needed to be raised to gain traction in customer acquisition and smooth out current quarter-to-quarter revenues. Metapath has received two offers as at September 1997 and they are discussed as follows: RSC and TCV consortium offered to buy $11.75 million of stock at a $76 million pre-money valuation (“Series E Preferred”). The proposed stock instrument was a participating convertible stock (“PCPT”).

This instrument functions the same as the convertible preferred stock in the event of a qualified public offering whereas in the event of a sale, RSC and TCV consortium not only receives the face value of the consideration, but also gets the equity participation. CellTech offered Metapath’s shareholders to receive common stock at closing in CellTech at $115 million.

STATEMENT OF THE PROBLEMS

The problems associated with the offers from RSC and TCV consortium are listed as follows: Proposed stock instrument is extremely dilutive to the founders in the event of a sale where the liquidity preference will reduce the amount of funds available to the other four tranches from previous investments.

If the Metapath goes public, the percentage of ownership for C & D tranches will be further diluted, after RSC and TCV consortium exercises its liquidity preference. The problems associated with the offers from CellTech are listed as follows: CellTech’s liquidity and financing issues.

Strategic/Business fit between CellTech and Metapath.

Comparing the term sheet of the offer from RSC and TCV consortium to that of CellTech, RSC and TCV’s PCPT had a much more dilutive impact to Metapath upon exit.

Under liquidation, the term sheet stipulates that the Series E investors is entitled to claim its initial investment of $10.75 million plus any accrued but unpaid dividend. Any proceeds after this claim will then be distributed to all common and Series E Preferred shareholders on an as-converted pro-rata basis. This double dipping means that RSC will not only recover its initial investment of $5 millions, but also enjoys the convertible benefits.

Under the circumstance of an IPO, tranches C, D and E will convert to common at their negotiated prices while A & B will be redeemed.

However, on the flip side, the price offered by RSC and TCV consortium was $6, which was significantly higher than the first three rounds of financing (tranches A,B and C) at $1.05 and final round (tranche D) at $1.62. PCPT instrument was created to enable the consortium to mitigate the risks in the event of a sale/liquidation that would be of the founders’ interests and value destroying.

CellTech’s valuation of $115 million was certainly attractive for a company like Metapath with a revenue run rate of $25.6 million. However, this represents approximately 30% of the totally capitalisation. The willingness from CellTech to sacrifice such a large amount of capital indicates that either CellTech genuinely believed that Metapath would contribute significantly to the synergies to the NewCo or there could be asymmetric information hidden from the management. It signalled CellTech’s underlying business might have limited upside. This issue needs to be further investigated if offer is accepted from CellTech.

In addition, CellTech’s balance sheet indicated ongoing liquidity and financing risks. As we can see from the table below, the company continued to face liquidity pressure where its cash ratio and quick ratio deteriorated over the course from 1995 to 1997. CellTech had six consecutive quarters operating loss, which indicated that its unhealthy operating cash flow ratio.

Doubts were raised whether CellTech was a good strategic fit to Metapath’s business model. This is due to the fact that CellTech’s products were mostly hardware-based and installed in the field with cellular base stations, whereas Metapath’s products largely consisted of software running on standard server platforms in the wireless switching office. The only benefit gauged regarding this point was that some of CellTech’s engineers could potentially be useful to Metapath’s development group.

The recommendation for Metapath is to take the offer from RSC and TCV consortium. Even though CellTech has performed well since the IPO and bullish views from the stock analysts, its potential information asymmetry issues and liquidity risk could harm the value of Metapath post acquisition. The limited strategic fit is also of our concern, which might constrain Metapath’s growth potential. With our ambition to lead Metapath to IPO, we see RSC and TCV consortium as a better fit in this case. Tranches A and B’s interests will be protected through their initial capital structures. Tranches C and D’s interests will be diluted; however it enables Metapath to continue its growth momentum with limited downside. 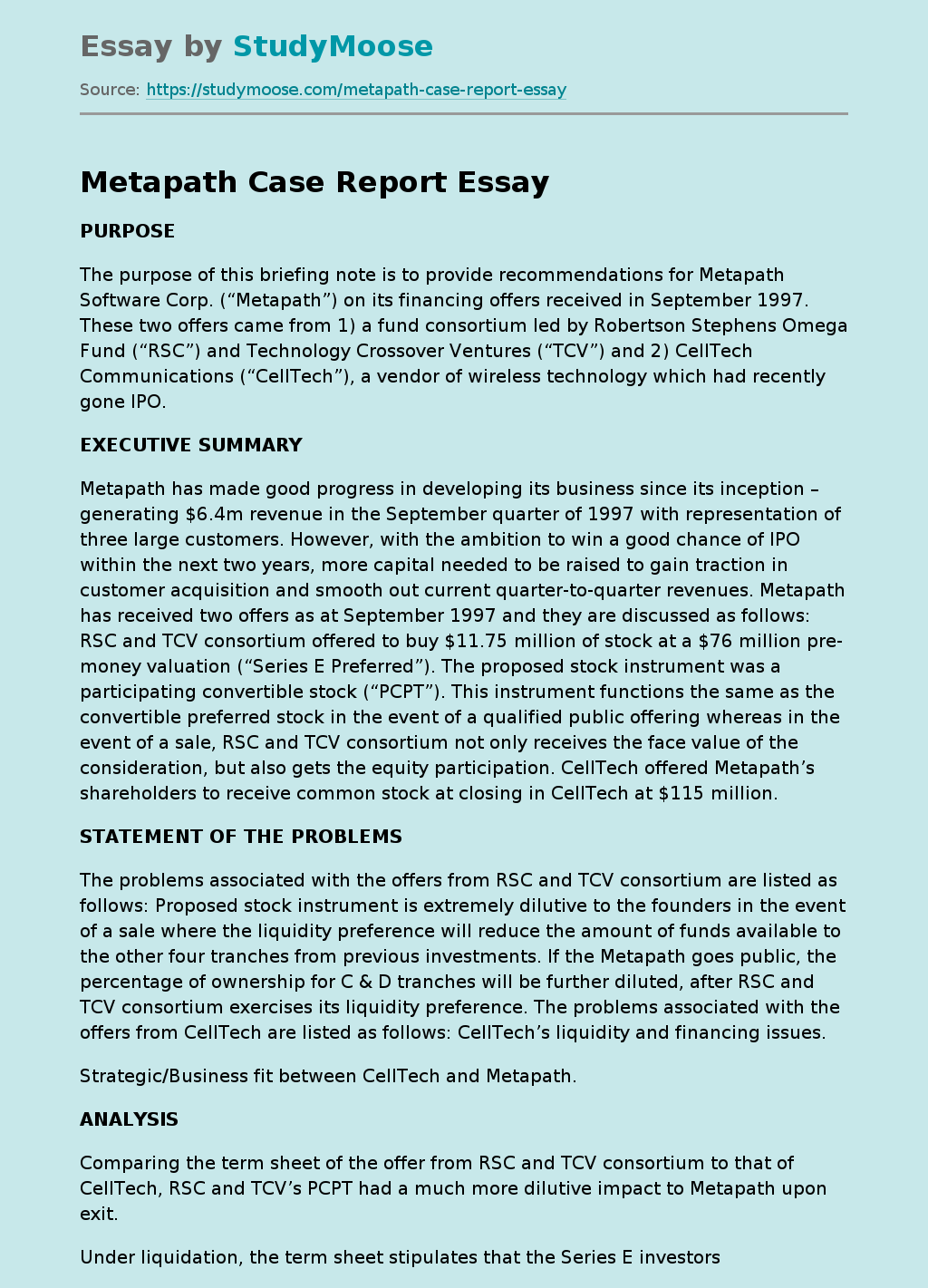