Imagery is used in many different ways. In A Tale of Two Cities Charles Dickens uses imagery to foreshadow, to characterize, and to create atmosphere.  Dickens uses imagery to foreshadow what is going to happen later on in the book. For example, when the large cask in front of the wine shop breaks it stains the streets red. It foreshadows the uprising of the French Revolution, and where the planning is going to take place. It also foreshadows what is going to happen during the revolution, but instead of wine it will be blood that is staining the roads.

Don't use plagiarized sources. Get your custom essay on
“ Tale of Two Cities Imagery ”
Get custom paper
NEW! smart matching with writer

Another example of foreshadowing is when Dickens describes the Farmer and the Woodsman as being workers of Death, working silently and unceasingly. This foreshadows how the French Revolution is going to start; silently, without any suspicion from the aristocrats. It is going to start with a bang that no one knew was coming.

Lastly, the use of the echoing footsteps is a way of foreshadowing.

It shows that whatever happened before is going to repeat itself later on. It also shows that some footsteps taken by the characters will disappear and they will gain a new goal or identity in life. Imagery is used to foreshadow what is to take place later on in the book. Imagery is used to characterize the people in the book. For example, when Sydney Carton is called the Jackal. This shows Carton as a person who can’t fend for himself and is a scavenger. He has to work for everyone else because he doesn’t believe he can do anything himself.

Another characterization of Carton is when he is called the Man of no Delicacy.

This is ironic because Carton has manners and is delicate. But the title is what people think of him because of the way he carries himself. Another instance is when Jarvis Lorry is called A Man of Business. Lorry is a man who is always doing things and trying to help out where he works, Tellson’s Bank. He shows no emotion and would do anything for the banks good interest. Finally, when they called Stryver the Lion. He is called this because of his leadership and the way he expresses himself. He is not told by anyone what to do and is always in charge. Imagery is very important when used to characterize people. 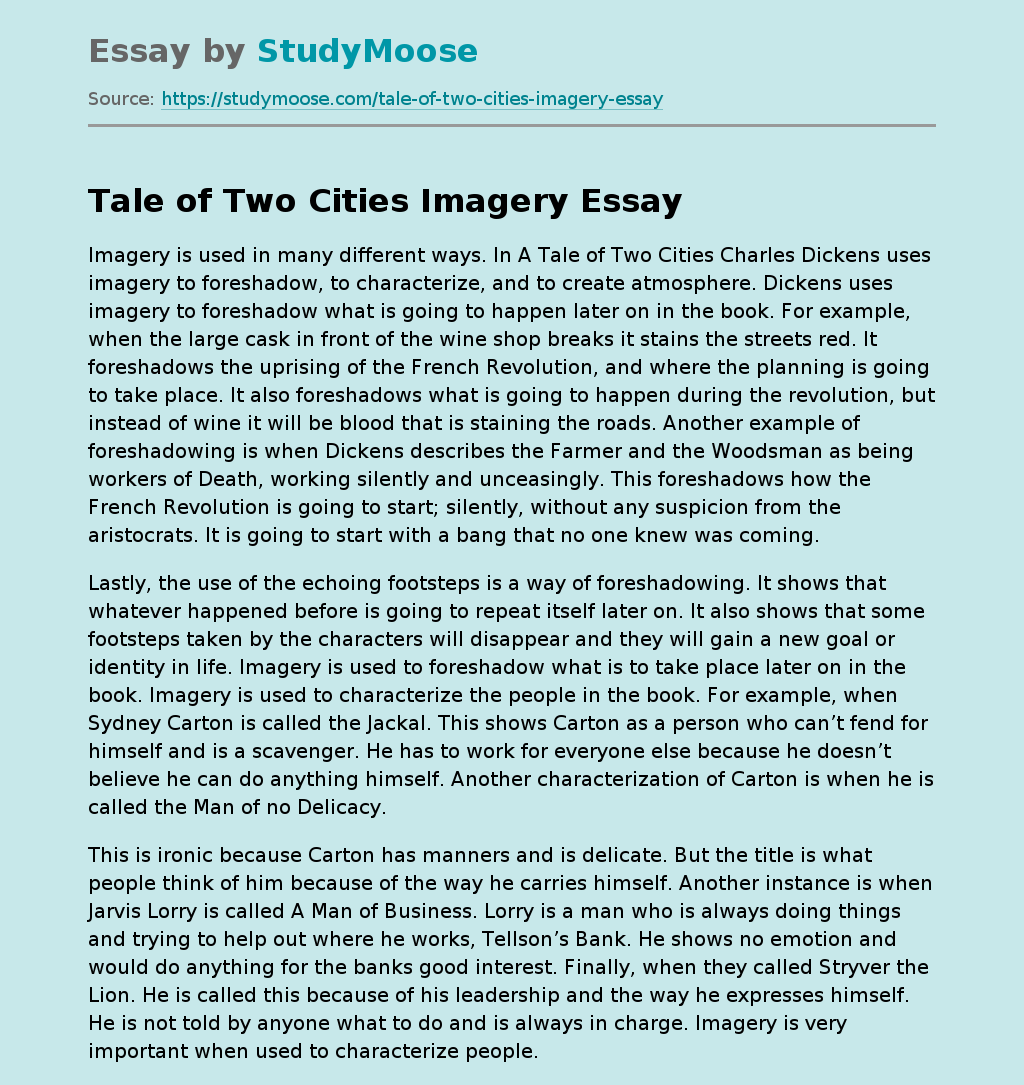