Don't use plagiarized sources. Get your custom essay on
“ Symbolism of the Mockingbird in to Kill a Mockingbird ”
Get custom paper
NEW! smart matching with writer

Miss Maudie explains this further by saying that “mockingbirds don’t do one thing but make music for us to enjoy.

They don’t eat up people’s gardens, don’t nest in corncribs, they don’t do one thing but sing their hearts out for us. That’s why it’s a sin to kill a mockingbird”. Bluejays are very loud, territorial and aggressive (bullies). The bluejays represent the prejudiced bullies of Maycomb, such us Bob Ewell.

Mockingbirds, on the other hand, are innocent and all they do is sing beautiful songs; they would not harm anyone. It is easy to understand that the mockingbird in the story is Tom Robinson, a harmless man who becomes a victim of racial prejudice.

Like the mockingbird, Tom has never done wrong to anyone. Even the jurors who sentenced him to death had nothing personal against him. They found him guilty mostly because they felt that to take the word of a black man over two whites would threaten the system under which they lived (Jim Crow Law), the system of segregation.

After Tom was killed for attempting to escape from prison, Mr Underwood wrote in an editorial that he “simply figured it was a sin to kill cripples, be they standing, sitting, or escaping.

He likened Tom’s death to the senseless slaughter of songbirds by hunters and children”. The parallel between killing a mockingbird and killing a cripple man, Tom, is apparent here. Both of them are completely defenceless and innocent before their persecutors showing that it is sinful for them to be killed in that way. (1)Prejudice –having unreasonable feelings, opinions, attitudes towards treating someone differently regarding superficial factors; race, religious. Tom Robinson is not the only mockingbird in the story. Boo Radley is another harmless creature who falls victim of cruelty.

He is unjustly regarded as an evil person and used as the scapegoat for everything bad happening in town. Women are afraid of him and so are children. When the sheriff decided that he would not arrest Boo Radley for killing Bob Ewell and that would present his death as an accident, Atticus asked Scout if she understood the meaning of this decision. Scout replied that she did. Her words were: “Well, it’d be sort of like shootin’ a mockingbird, wouldn’t it? “. Boo here is also compared to the gentle bird and again it would be a ‘sin’ to be punished for the murder he committed.

Boo Radley’s view as a mockingbird emphasizes the universality of human nature. Tom Robinson’s case may be bound up with the complex social problem of racial prejudice, but any neighbourhood can have its Boo Radley, all but forgotten except as the subject of gossip and rumours. The symbol of the mockingbird can be applied to Boo Radley from another point of view as well. The mockingbird has no song of its own. It just imitates other birds. Therefore it makes itself present and is seen through other birds.

In the same way, Boo Radley is seen through the eyes of other people. He does not have a character of his own. What we know about him is what other people say eg scout and jem. He is believed to have stabbed his father in the leg with a pair of scissors, to peep through windows at nights, to be “six-and-a-half feet tall, dined on raw squirrels and any cats he could catch, his hands were blood-stained; what teeth he had were yellow and rotten; his eyes popped, and he drooled most of the time” Of course, none of this stories about him is true.

In fact the stories tell us more about the people who spread them rather than Boo Radley himself. Symbolism is used in the novel To Kill a Mockingbird. The symbolism reveals the prejudice and narrow-mindedness of the citizens of Maycomb County, their fears and the immoral things they did. It also reveals an attempt to purify people from these feelings, by a hero figure, a model to the community, Atticus Finch, as well as his two children, who surely follow in his footsteps.

The story ends with the reading of a book by Atticus, The Grey Ghost, another symbol perhaps for Boo Radley whose “face was as white as his hands and his grey eyes were so colourless”, a description fitting to one of a ghost. Before she falls asleep Scout describes the story which happens to be about someone falsely accused of doing something he never did, exactly like Tom Robinson and Boo Radley, the two mockingbirds of the story so wrongly treated by others. The closing of the novel with another symbol for the two victims of human malice suggests the power Harper Lee sees in symbolism, which carries the message better than words.

I think the undressed question of the novel is why did Harper Lee make Tom Robinson and Boo Radley mockingbirds I think she made the two of them mockingbirds because mockingbirds are easily hunted making them an easy target an example of Tom Robinson acting as a mockingbird/easy target is at the court case when he’s being questioned, he is vulnerable and is being hunted by the court this is because nobody believes he’s an innocent man expect Atticus. Harper Lee believed it is wrong to judge someone because of there race this is shown though out the book, thought the symbolism of prejudice.

Symbolism of the Mockingbird in to Kill a Mockingbird. (2016, Dec 09). Retrieved from https://studymoose.com/symbolism-of-the-mockingbird-in-to-kill-a-mockingbird-essay 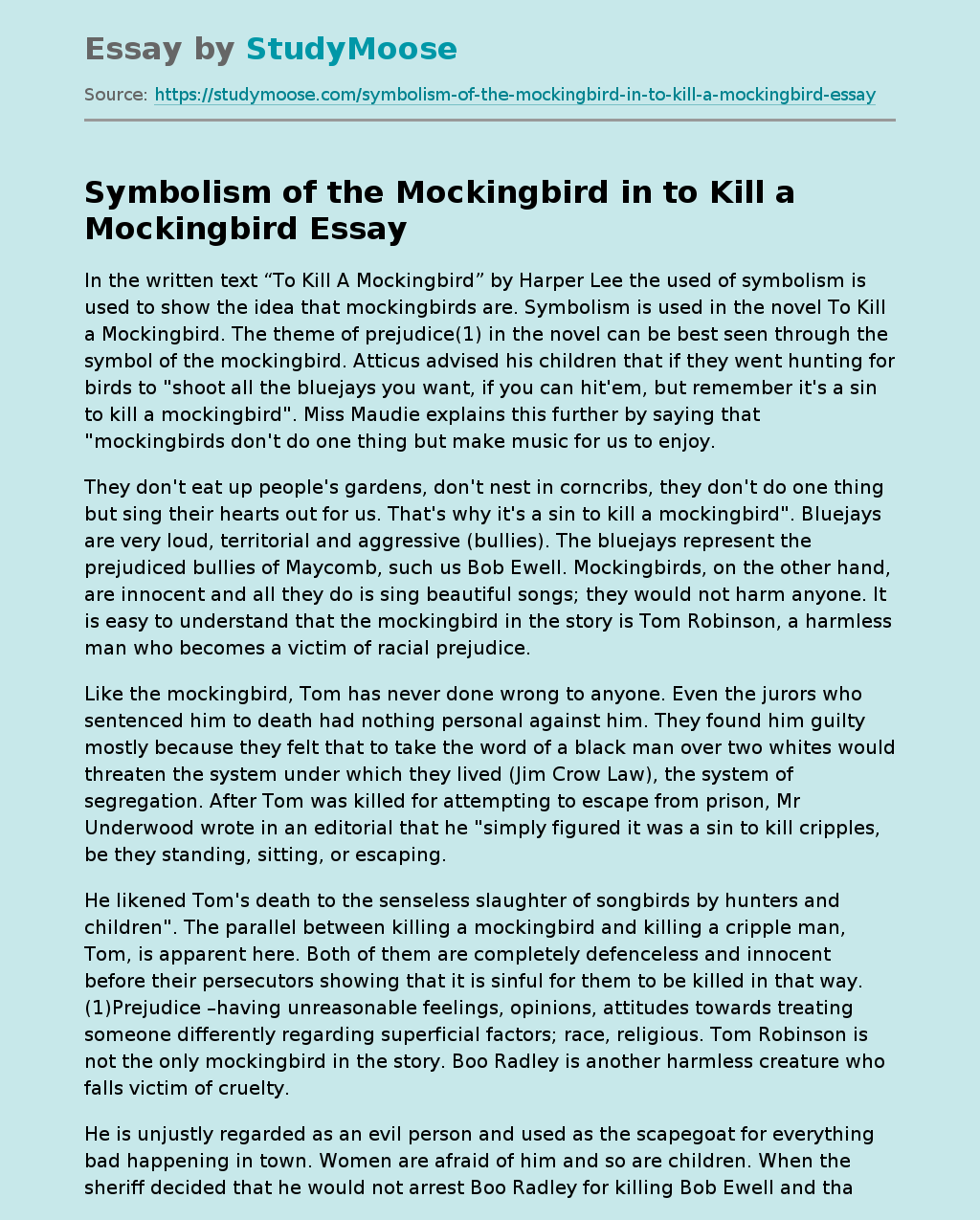