"To Kill a Mockingbird" Metaphor Analysis

Don't use plagiarized sources.
Get Your Custom Essay on “To Kill a Mockingbird” Metaphor Analysis Just from $13,9/Page

To Kill a Mockingbird is an inspirational and thought provoking story that is the first and the only novel written by Harper Lee. The basic time setting of the novel is in the 1930s during the Great Depression, in the fictional town of Maycomb Alabama, where prejudice of every sort runs throughout the town. However, this is not a mere story that touches the subject of coping with racism.

As the novel’s title itself implies a deep meaning, the mockingbird is a powerful symbol that echoes a strong message to the society, and thus holds a great significance in its metaphorical interpretation. Mockingbird is portrayed as a weak and fragile songbird that represents innocence but is nevertheless shot by men in the end. Throughout the plot, one metaphorical character becomes increasingly apparent. A racially discriminated African American, Tom Robinson, is illustrated as the best mockingbird figure of the novel, for he does no harm to the society, but nonetheless his voice is ignored by the majority of the people, and he is eventually persecuted just like an innocent mockingbird being shot by ignorant hunters.

Despite Tom Robinson’s apparent innocence, after all, he is announced to be guilty. Like hunters who kill mockingbirds for sport, people kill innocence without the awareness of their action taken against the blacks. “…She (Calpurnia) says they’re clean-living folks.”(75) This statement appears during a conversation between Atticus and his daughter Scout, and holds a certain amount of importance for it confirms that no guilt falls upon Tom Robinson. Robinson has a reputation with his own black community as an upright, honest, church-going family man, and therefore Atticus stands firm in his defense of innocence and urges his children not to shoot mockingbirds both literally and figuratively. On the other hand, as a contrast to the mockingbird figure, the Ewells are the blue jays, who are nowhere close to model citizens. “Atticus said the Ewells had been the disgrace of Maycomb for three generations. None of them had done an honest day’s work in his recollection.”(30)

Scout, Atticus’s daughter mentions this during her narration which brings upon the contrasting image of the innocent mockingbird-Tom Robinson, and the obnoxious blue jays-the Ewells. This quote is important because although Tom Robinson is accused of raping Ewell’s daughter, Mayella, through the usage of the quote, Harper Lee is foreshadowing Robinson’s innocence and Bob Ewell’s guilt and trouble that he causes later in the plot. Furthermore, the statement “It’s a sin to kill a mockingbird” (90) quoted by Atticus, also proves to the readers that the mockingbird itself, and the mockingbird figure of the novel both do no harm, but on the contrary is helpful for us, and therefore it is a sin to jeopardize its livelihood due to the fact that the songbird only sings from its heart and brings peace into this world. Thus, the mockingbird and Tom Robinson is similar in the aspect of their innocence. Tom is a member of the black community who possesses remarkable moral courage. However, by presenting the blacks as victims that suffer from the Maycomb villagers, Harper Lee reflects Tom as the ideal mockingbird figure of the novel.

Similar to the mockingbird’s song which are not appreciated by men, Robinson’s voice is ignored by the majority of the Maycomb people. As a matter of fact, generally in the 1930s, white men of a pluralistic society were unable and unwilling to accommodate themselves to a broad range of cultural peculiarities and thus looked down upon people of different race. In the end of the novel, Atticus states a remarkable quote: “…you gentlemen would go along with them on the assumption-the evil assumption-that all Negroes lie, that all Negroes are basically immoral beings.” (217) This is proving to us that meaningless assumptions prevent all men from hearing the truth with an open mind. Therefore, the mockingbird and Robinson’s voice commonly are not paid attention to throughout the whole novel. “It couldn’t be worse Jack. The only thing we’ve got is a black man’s word against the Ewells. The jury couldn’t possibly be expected to take Tom Robinson’s word against the Ewells.” (88) This quote from Atticus is noteworthy for it implies that regardless of what Tom Robinson claims in the court, the jury is expected to stand on the white man’s side.

Although the jury at court is supposed to make objective decisions, along the other villagers, he displays a definite bias against the black man. If there is any responsibility that falls upon Tom, it would be the responsibility for chopping wood and providing help for Mayella who is reflected as the loneliest person on earth in the eyes of Scout. However, the mockingbird figure is wrongly accused of things that he has never done or even imagined. Although there is a sufficient amount of proof that Robinson is innocent, it is ignored after all, and he is imprisoned. Emphasizing this, Atticus tells his son Jem: “In our courts, when it’s a white man’s word against a black man’s, the white man always wins.” (220) This quote is significant because it reveals the fragility of a mockingbird and thereby reflects the status of African Americans during the historical period. Tom Robinson’s voice is never taken seriously in the story by white men, just like how a mockingbird’s song is hardly noticed by the majority of the hunters and children.

Ultimately, Robinson is persecuted unjustly by the society and is shot by the ignorant men in the end. “They shot him 17 bullet holes in him.” (235) Robinson getting shot by seventeen bullets implies the meaning that he has been killed unreasonably, in order for the white men to make an example out of Robinson for their own pleasure of authority over black men. Similarly, mockingbird usually is killed for the hunters’ own attainment of satisfaction. Furthermore, after Tom Robinson’s death during his escape from the prison, Mr. Underwood writes an editorial in the Maycomb Tribune which underscores the symbolism. He compares Tom’s death to the senseless slaughter of songbirds by hunters and children. Ultimately, this proves to the readers that the gentle and warmhearted man is discriminated against by the color of his skin and is deeply misjudged by the majority of people, just like how hunters kill the innocent mockingbirds without noticing their beautiful song. “We had such a good chance. I guess Tom was tired of white men’s chances and preferred to take his own.” (236)

Realizing that he has reached an impasse, Tom decides to take a risk and attempts to escape from the place. This scene is portrayed as a black man perusing the last freedom he could reach out to, which is similar to a flying mockingbird-a mockingbird that escapes out of its cage and flies until it is shot by men. The scene vividly illustrates how people unjustly punish the person for doing the right thing, a sad fact of life which will always be present in our society. Unfortunately, the people in Maycomb do not realize their unfair treatment of Tom Robinson even in the end, and is never aware that he was in a hopeless plight and needed a rescue from the predicament, which is parallel to the situation where a mockingbird gets shot by men who do not realize that they’ve killed an innocent bird that does no harm to them from any aspects, but play music for us to enjoy. Robinson lives a life of a mockingbird, for he is a good, innocent person who is destroyed by the evil. People never realize that it is a sin to kill a mockingbird and this eventually makes the death of Tom Robinson much more tragic.

The metaphoric character Tom Robinson certainly shares numerous similarities with the mockingbird in various aspects. He is innocent and does no harm, but the society ignores his voice and persecutes him unreasonably. Just like a mockingbird, he is misjudged by the majority of the people. Throughout the novel To Kill a Mockingbird Tom Robinson is represented as the most apparent victim, the mockingbird figure of the story. However, most importantly, the mockingbird metaphor lies beyond the character Tom Robinson, and stretches further in terms of the whole society in the 1930s. All the African Americans who endured racism and prejudice are symbolized as the songbird. Maycomb’s black citizens are constantly oppressed by discrimination and are forced to live in an environment where their lives can easily be sentenced to death, or incarcerated unfairly, just like how mockingbirds are shot by hunters. Harper Lee, taking the risk of controversies on the subject of racism, finally addresses to all readers world wide, that it is indeed the greatest sin of our society to kill a mockingbird.

“To Kill a Mockingbird” Metaphor Analysis. (2016, Jul 05). Retrieved from https://studymoose.com/to-kill-a-mockingbird-metaphor-analysis-essay 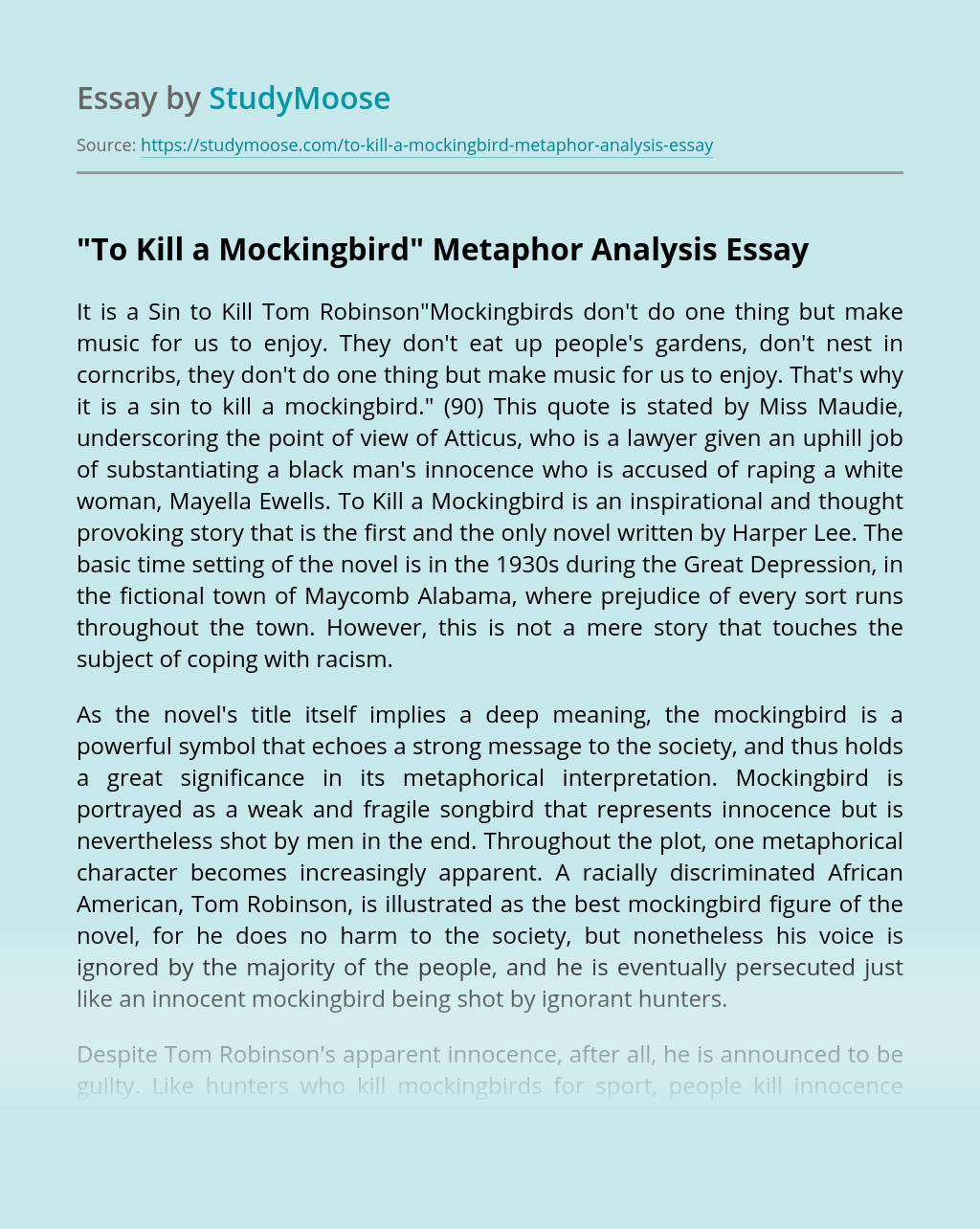 "Death of a Soldier" by Louisa May Alcott

The excerpt “Death of a Soldier,” taken from Hospital Sketches by Louisa May Alcott features various rhetorical strategies to create an appeal to emotion. She exhibits the compassion of the nurse for John, even in the face of inevitable death; she displays the altruistic mindset of John, and adds depth to her words by using...

Character Color Analysis”The Great Gatsby”, written by F. Scott Fitzgerald, is discusses social classes, and focuses on the theme of a fading social order. This theme is shown in the relationships between the characters and undoubtedly in the characters themselves. Throughout the novel, Fitzgerald not only uses color symbolism to set the scenes and events,...

Get Essay
Friendships in "Of Mice and Men"

Throughout life, one establishes friendships to better ensure their future. The novel Of Mice And Men, written by John Steinbeck, is about a group of traveling labor workers and the hardships that they overcome. The friendship between George, one of the main characters, and Lenny, a retarded man and of Candy, a crippled man, and...

Financial abundance is perhaps the most sought-after purpose of modern men. We spend a significant part of our lifetime doing jobs and chasing profits even if it is against our own will. In the context of the money driven world, we even have a notion that money would endow us a certain sense of strength—a...

About The Author. Emily had an unusual character, extremely unsocial and reserved, with few friends outside her family. She preferred the company of animals to people and rarely travelled, forever yearning for the freedom of Haworth and the moors. She had a will of iron – a well known story about her is that she...