Power in to Kill a Mockingbird

Powerful vs. Powerless – to Kill a Mockingbird

What is power? I believe that power is having the ability to do anything you want, it allows you to shape your own reality and other. I am here today at the Power to the People 2013 youth convention to talk about the novel ‘To Kill a Mockingbird’ written by Harper Lee, and how it explores the concept of what powerful and powerless is. Power is constantly present throughout this novel.

Don't use plagiarized sources.
Get Your Custom Essay on Power in to Kill a Mockingbird Just from $13,9/Page

The novel acknowledges that true justice is often impossible to reach. It reveals how an individual or a group in society can use their power to do good or evils things.

For example, the coloured people in Maycomb have a very little power due to racial prejudice. We learn that it is a sin to kill a mockingbird, that taking advantage of a powerless man is a sin. The idea of greater power equals greater responsibility is also presented in this novel.

For instance, Atticus has power being a lawyer and thus he has the responsibility of standing up for what’s right which is to defend a black man. The idea of power is smoothly conveyed through the use symbolism, descriptive language and metaphors.

The mockingbird carries a great deal of symbolic meaning. Harper Lee uses the “mockingbird” to represents that idea of innocence. Tom Robinson, Jem and Boo are idealised figures of mockingbirds in the story as their innocents have destroyed by evil. The idea of innocence being destroyed occurs after the killing of Tim Johnson, waiting for the trail verdict, in Mr Underwood’s article and on the way to the pageant. Harper Lee uses descriptive language to show how the misuse of power can majorly impact an individual’s life. Boo Radley represents fear. 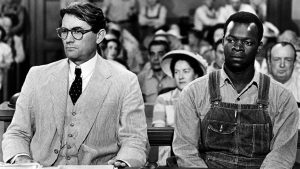 The people in Maycomb fear that if they act eccentric and fail to obey to social rules they too will end up like Boo, isolated and remembered as a monster. It is this fear that keeps individuals from standing up for what they believe in. “Maycomb was an old town but it was a tired old town “ As Scout has said. This is a metaphor that inter connects the negative things about Maycomb. The word ‘tired’ suggests the lack of enthusiasm in this town and unwillingness to change. The Maycomb society uses their power to abuse it against the coloured people.

There is a racist subdivision in the novel where white people are more superior than the black people. Whether a person has excess or lack of power, the way they use it can greatly impact an individual. The different types of powers explored through this book are authoritative, official and projected power. Atticus has authoritative power over his children as a father. He uses his power to benefit his children and gives them moral guidance. Instead of trying to force principles on his children, he makes them think about their actions.

For example “shoot all the blue jays that you want, but remember it’s a sin to kill a mockingbird”. This is a lesson we can all learn, Atticus is saying, just because you possess power over something doesn’t mean you have to use it against it. Atticus has a great deal of official power in the court room and uses his power for good. He believes in justice and thus takes on Tom Robinson’s case knowing that he’s going to lose, however he still gives his strongest defence in the court room to help him. This shows that his character has great courage and morality by not being prejudice to the coloured people in his community .

But yet, the consequence of his morality proses as a threat to his standing and reputation in the town of Maycomb. Tom Robinson was a good member of the black society, however he is a character that lacks power and gets misjudged due to his skin colour. He’s character invokes sympathy from the audience when he becomes accused of raping Mayella Ewell. In Tom’s trial verdict, all evidence that was produced made it clear that Tom is innocent, yet he is found guilty. This verdict is clearly based on his skin colour and his lack of power.

Bob Ewell is a character that lacks power in the white society but he uses his power against Tom Robinson due to the fact that he’s an African American. Bob Ewell demonstrates that power can be taken and abused by other. He possesses projected power over Tom Robinson. As a consequence, he was confronted by Atticus in the court room and had his dignity was stripped away. As a result, he attacked Jem and Scout which eventually led to his death. A character that struggles for power is Mayella Ewell. She doesn’t connect well with her family and doesn’t have any power over them.

Through the novel, we can see that she misused her power when she took control over a powerless black man. When she is taken to court, Atticus gives her the respect she had desired but she accuses him of mocking her. Her pitiful and shabby actions to gain power resulted in a man losing his life. To Kill a Mockingbird is an engaging novel that has successfully helped me to come to a greater understanding of what powerful and powerless is. The novel vividly explores many ideas about the use and abuse of power, different forms of power, consequences of power, desire for power and the different language techniques to convey power.

Power in to Kill a Mockingbird. (2020, Jun 02). Retrieved from https://studymoose.com/power-in-to-kill-a-mockingbird-new-essay