Symbolism of Night and Dark in Macbeth

Macbeth is a play written by Shakespeare in 1606. In the play, “Macbeth”, it tells a story of a man who will stop at nothing to be the reigning King, even if it means killing his ally. Throughout each act there is symbolism in the speech and scenery making the play more engaging and different from any other type of play. Shakespeare used symbolism in Macbeth to help the reader understand the overall theme of murder. Some examples include the mentioning of blood; which symbolizes the guilt that Macbeth and his wife Lady Macbeth have towards the murder of Duncan.

Don't use plagiarized sources. Get your custom essay on
“ Symbolism of Night and Dark in Macbeth ”
Get custom paper
NEW! smart matching with writer

It uses Water, symbolizing the purification of the conscious. Then Shakespeare used the, Night and Darkness to represent foreshadowing of something dark or evil about to happen, or the guilt weighing down on Lady Macbeth in her sleep, and also the lack of luck. The, “Night” is first symbolized in the play in Act 2, Scene 1, Line 19.

The scene begins a little bit past midnight, and there are no stars out and it is pitch black, when Banquo had a dream of the three weird sisters.

He is then woken up in the middle of the night unable to sleep. He then goes with his son Fleance when they both see Macbeth making his way towards the king’s bedchamber. Banquo then tells Macbeth about his dream, they then agree to get together another time to discuss his dream. After this, Macbeth is by himself and sees a ghostly dagger showing him the way to Duncan.

He then goes to the king’s bedchamber where Duncan is sleep and kills the king in his sleep with the dagger in the middle of the night. This goes to show that the night symbolized something evil was about to happen, and in this case it was the death of the king. The ‘Night/Darkness” also comes back again later on in the play as luck during Act 3, scene 1. It is when Banquo has a suspicion that Macbeth has killed king Duncan so that he can fulfill the witches prophecies, he then shrugs the thoughts aside not believing them. Macbeth will then have a banquet in the evening, and he wanted Banquo to be a chief guest at the party. Banquo then tells Macbeth that he will be bringing his son Fleance to the banquet, and when Macbeth heard about it, he promised Banquo and his son a safe ride. Later on, Macbeth came up with a plan, and hired two unprofessional hitmen to kill Banquo and his son at a certain distance away from the palace right as they return from their ride, so that him, or his children can not become king. The two hitmen were then introduced to the third hitman who was said sent by Macbeth to help kill Banquo and his son.

Eventually Banquo and Fleance enter, and are then attacked by the three hitmen. They only managed to get Banquo, leaving his son Fleance to escape in the darkness. He was lucky to escape the hit, and was able to tell on Macbeth for putting a hit on him, and his dad. The darkness symbolizes that something bad had just happened. It is then once again that the Night/Dark has a symbolic meaning in the play. It is in Act 5, scene 1, where Lady Macbeth is having abnormal sleep habits. She is constantly seen sleepwalking, and is seen by a doctor who has been watching her for two days. Lady Macbeth has been seen to rise, get dressed, write something on a piece of paper, read it, seal it, and return to bed, without waking up. Lady Macbeth requests to always have a candle or some type of light by her at night. She later on is found washing her hands in her sleep trying to get the stain and smell of blood off her hands. Lady Macbeth shows her guilt of killing Duncan even in her sleep. This feeling of guilt eventually made her go so crazy that she eventually killed herself, for she could not bare the guilt that weighed upon her. The “Night” was symbolic in this part of the play because it meant something horrible was about to happen soon. Lady Macbeth thought that light would help her, but unfortunately it didn’t.

In the play Macbeth, Shakespeare used symbolism perfectly to help the reader better understand the feelings, and themes of the play. The symbolism of, “Night/Darkness” was a foreshadow that something evil and wicked was about to happen. As when Banquo couldn’t fall back asleep at night, foreshadowing that King Duncan was soon to be killed by Macbeth. Then in another situation where Macbeth puts a hit on Banquo and his son Fleance, but then Fleance runs and escapes into the darkness after the killing of his dad, symbolising that something horrible has just occured. The, “Night” also symbolises evil will come soon, when Lady Macbeth is seen sleepwalking at night, which leads to her killing herself.

Symbolism of Night and Dark in Macbeth. (2021, Oct 12). Retrieved from http://studymoose.com/symbolism-of-night-and-dark-in-macbeth-essay 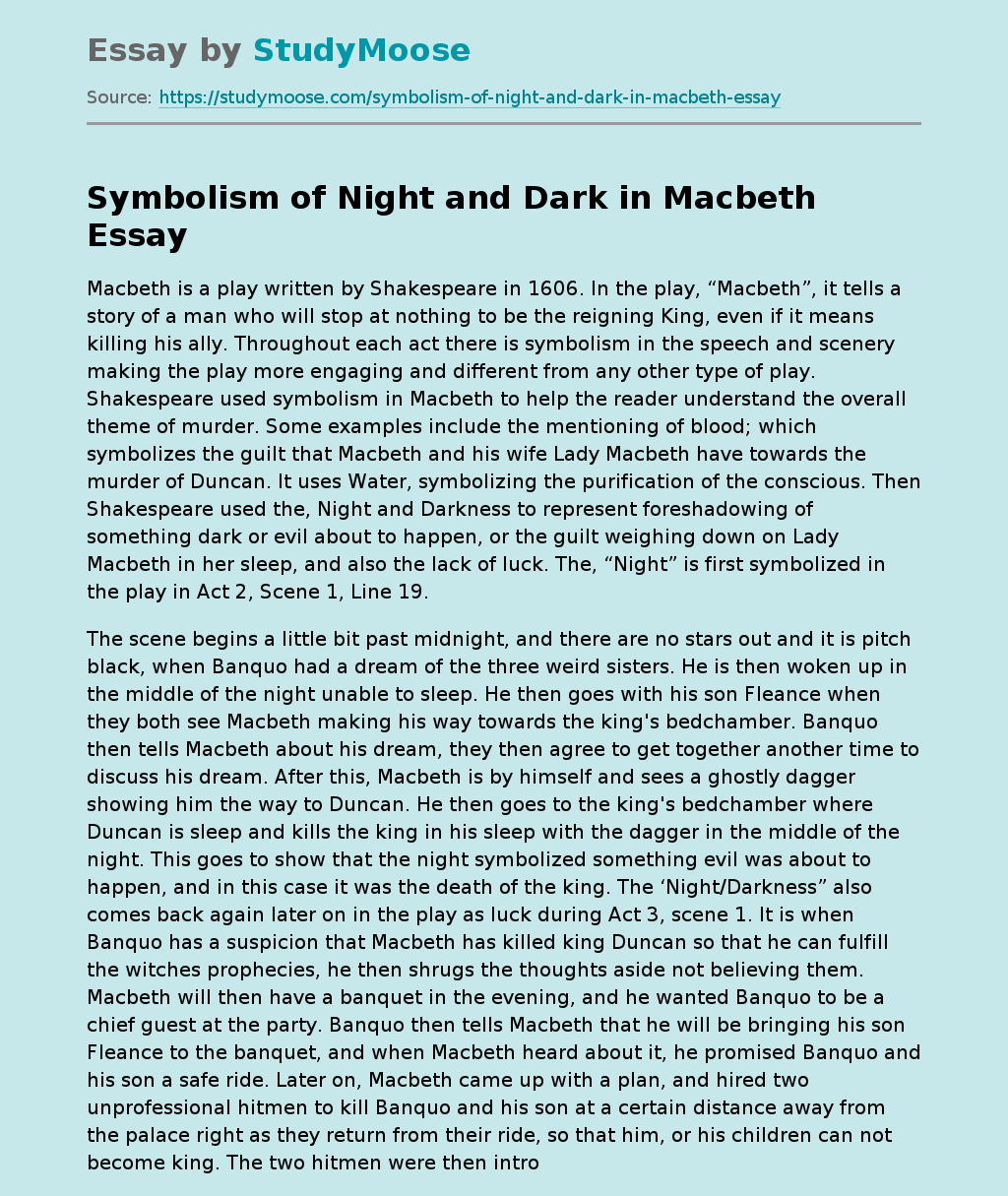