Dylan Thomas’ “Do Not Go Gentle Into That Good Night” is arguably the most famous villanelle compose in English. The poem’s subject is death; more specifically, the death of Thomas’ own father. Critical interpretations of the poem uniformly praise the poem’s imagery and symbolism, while popular appraisals of the poem center around the poem’s simplicity of language and its easily memorable, repeated lines. Though technically restrained and simple from the standpoint of language and imagery, the poem creates complex tensions and associations by the changing emphasis of the repeated words and imagery.

Turn in your highest-quality paper
Get a qualified writer to help you with
“ Discuss symbolism of death in `Don`t go gentle into the good night ”
Get high-quality paper
NEW! AI matching with writer

By causing the reader to read the same, repeated words, each time with a different emphasis on meaning and imagery, Thomas attained a depth and profundity in his villanelle which seems to take the form itself to an entirely new plane of expression. Part of Thomas’ extraordinary capacity to express deep themes in the villanelle form is derived from his capable use of symbolism throughout the poem.

Because the poem is about death, the symbolic associations in the poem which are tied to Thomas’ conception of death provide the primary emphasis for the poem’s expression and tension.

Merely by reading the title, the reader is furnished with Thomas’ first and most dynamic symbolic association with death — “That Good Night. ” Death is symbolized by a “good night” which indicates both departure and (through logical progression) the eventual rising of the sun, or resurrection. The tension of the poem is squarely evoked, also, in the title with the verb “go” providing another symbolic association with death, that of motion, travel, departure and movement.

Both associations, “good night” and “go” imply activity beyond death. So the admonition “do not go” by implying stasis, begins the central tension of the poem, right from the title. Lines 2 and 3 extend the symbolism of death into a more complex series of associations, one which includes overtly negative evocation “Old age should burn and rave at close of day;/ Rage, rage against the dying of the light. ” Here death is symbolized by the “close of day” and as a “dying” light.

The admonition to “not go” becomes an impassioned verb “Rage, rage” and also “burn and rave. ” Though not explicitly stated, the connotation is that life = day, so death = night. By all logic night and day follow one another, of course, so life beyond death is implied in Thomas’ symbolic associations with death. Further symbolic association with death is made by Thomas use of blindness and sight to differentiate between the dead and the living.

“Grave men, near death, who see with blinding sight/ Blind eyes could blaze like meteors and be gay,” and again there is good reason to read sight and blindness as interchangeable states, with Thomas so implying that life and death are the same. Meanwhile, with each refrain of the poem, he implores “Do not go gentle into that good night/ rage, rage against the dying of the light” and this is where the suspense and emotion of the poem are generated. The final symbolic association with death that is woven into the poem is Thomas’ use of the term “sad height.

” These words imply heaven but also the grief of mortality in one unique phrase “And you, my father, there on the sad height,/Curse, bless me now with your fierce tears, I pray. ” The suspense of the poem is broken, finally, by the refrain — which by now, the reader realizes cannot keep the subject of the poem (or anyone) from their appointed time with death. because the symbolic associations of the poem describe death as a both unknown but possibly beautiful and renewing state of being, the poem has sustained tension and ambiguity.

Thomas crafted a poem which posited his subjective experience of his father’s death and his subjective associations with the consequences and realities of human mortality. The poem relies on symbolic associations of a universal and enduring nature to describe a complex interrelationship between life and death and the joy and despair of mortality. It is due to these associations that Thomas’ poem has become one of the most celebrated if not the most celebrated villanelle in English.

Discuss symbolism of death in `Don`t go gentle into the good night. (2016, Aug 24). Retrieved from https://studymoose.com/discuss-symbolism-of-death-in-dont-go-gentle-into-the-good-night-essay 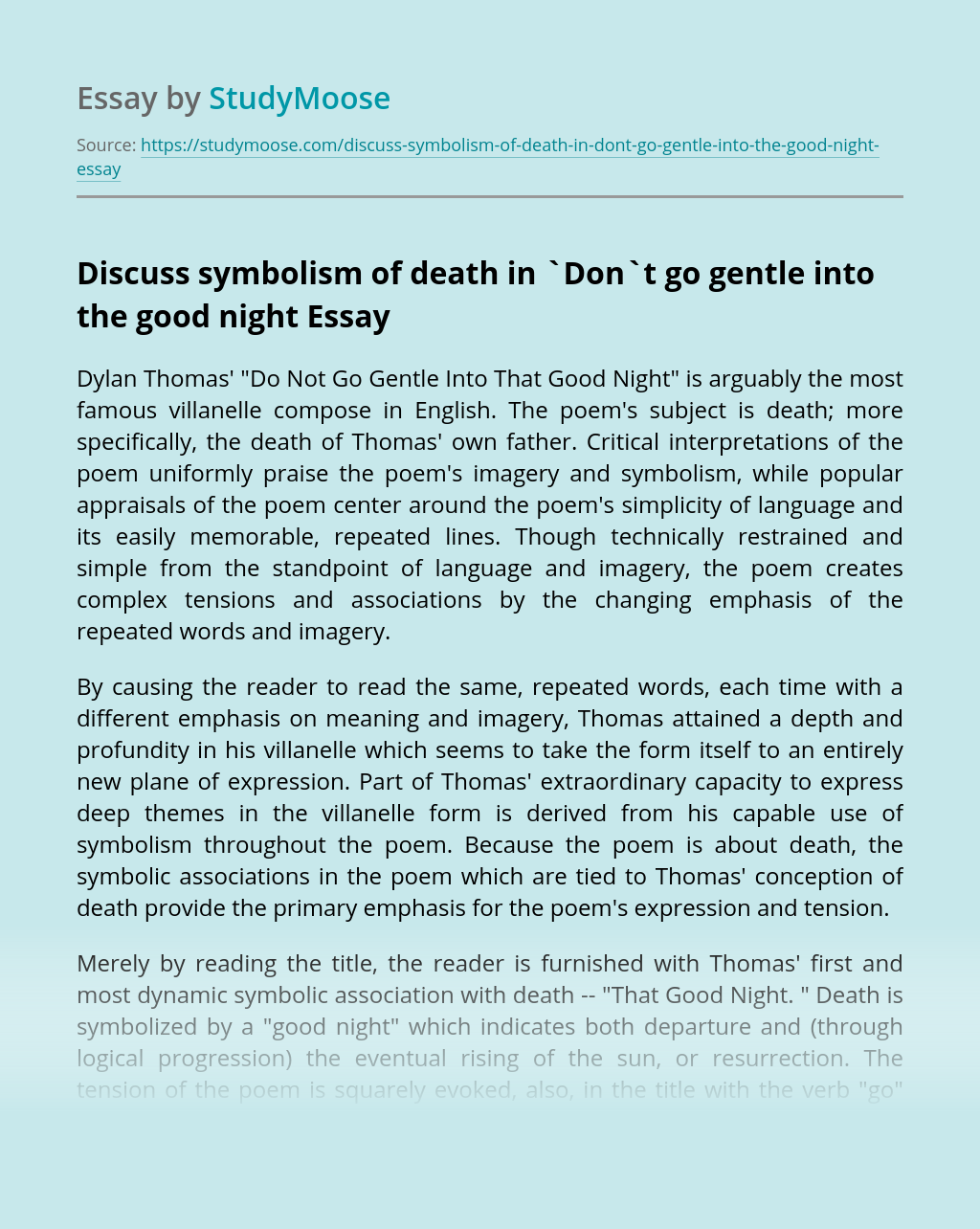 Turn in your highest-quality paper
Get a qualified writer to help you with
“ Discuss symbolism of death in `Don`t go gentle into the good night ”
Get high-quality paper
Helping students since 2015
Stay Safe, Stay Original