Stylistic Analysis Of The Poem "Going"

The author of the poem “Going” had a specific message that he intended to set across to his readers. To do this, the author used a number of stylistic elements that include foregrounding, imagery, symbolism, diction, synthetic parallelism and structure among others. This essay intends to give a brief stylistic analysis of the poem and describe how these devices have affected the meaning of the poem. Basically the poem “Going” according to the essay is about a new era that is coming into a society, associating the poem with the theme “Change”, whereby this era has its own downsides and benefits, those which will both be endured by members of the society.

Don't use plagiarized sources. Get your custom essay on
“ Stylistic Analysis Of The Poem “Going” ”
Get custom paper
NEW! smart matching with writer

The author makes his remarks on the upcoming era that he depicts as an “evening” this evening has never been experienced before by the members of the general society. Despite the upcoming era sounding impedeous on the society, it seems promising and comfort earning. A few notable changes will take place physically to give room for this “evening”, but the poet closes the piece with questions pertaining to the “evening” that comes up.

To keep his theme alive in the poem, the poet in the first stanza adopts “time” particularly evening for imagery in the poem. In support of this observation is the cautious use of the word “an evening” in line one of the first stanza in which the poet is giving a description of the arrival of this evening, which is said to be moving across fields advancing towards the people.

The essay observes that the poet wrote the piece in the era of industrialization, where this era can be likened to the “evening” depicted in the imagery associated with the word. This is to say that the poet is describing the coming in of the industrial period, which will replace the farming era. This farming era has been symbolized by the word “fields”. The poet further more adopts synthetic parallelism to emphasize that this new era has never been experienced before by saying; “Across the fields, one never seen before” (stanza one, line two) As if synthetic parallelism is not enough, the poet features the adjective “never” in his choice of diction to show contrast that this new evening has not once seen before.

He likens the strength of the darkness associated with this “evening” as that which cannot even light lamps, a notion which objects how streetlights behave when darkness comes up, thereby creating an atmosphere for the reader that this “evening” has super strength. In the second stanza the poet is giving a description of the bonuses that the society will earn from the “evening”. To draw a line of difference, the poet uses the word “silken” in line one of the second stanza, to say that this new era seems promising from afar, the poet used the word “silken” which is associated with, softness, shining and attraction all this is to project the better side of this new era (industrial period). The poet furthermore says it is just a matter of time until the fruits of this new period start to sprout, again to successfully depict time, he uses “knees” and “breast” which are the basic standards used to indicate rising of an element for example water. To give a total picture of the fruits that will be earned from this “darkness” the poet in the last line of the second stanza uses the word “comfort” The industrial era having been fully developed, trees that provided the word with shield from the sun’s scorching rays have been cut off to create room for industrial infrastructures. This is expressed in line one and partially line two of the third parallelism, which say; Where has the tree gone, that locked

Earth from the sky? What is under my hands, He likens a tree to a lock, just to show how the tree functions as it is with locks whose function is just to shield portals by locking. Here these trees are used to lock the earth from the sky, but now they have been cutoff just to create space for this new “evening”. The poet then deviates from his theme by asking of his endurance of the benefits that came with the now well developed evening. This is in lines two and three of the third stanza, to show that he has not enjoyed any fruit from the evening he associates the sense of feel, which he expected to encounter these fruits with his hands. He even emphasizes that he did not benefit from the new evening by using the word “cannot”.

To contrast the idea the poet intended to put across in the third stanza he closes the poem with a question which expresses the oppression the new system is making on the poet. This is by the use of the words “loads my hands down” to show that he cannot feel the benefits rather fills burdened by something he does not know. In terms of style the poet in the first three stanzas has maintained a three-lined stanza pattern to indicate the flow of the theme (Change). Rather the last line deviates from the pattern to indicate the difference in ideas it hold with the preceding stanzas making it a climax. Considering the devices discussed in the essay, it can be noted that the use of these devices contributes to the theme the poet has adopted. This is to say that every device used in the piece, projects the theme in the reader’s mind in one way or the other and without them, it would be so hard to determine what the author had in mind.

Stylistic Analysis Of The Poem "Going". (2016, Mar 06). Retrieved from https://studymoose.com/stylistic-analysis-of-of-the-poem-going-essay 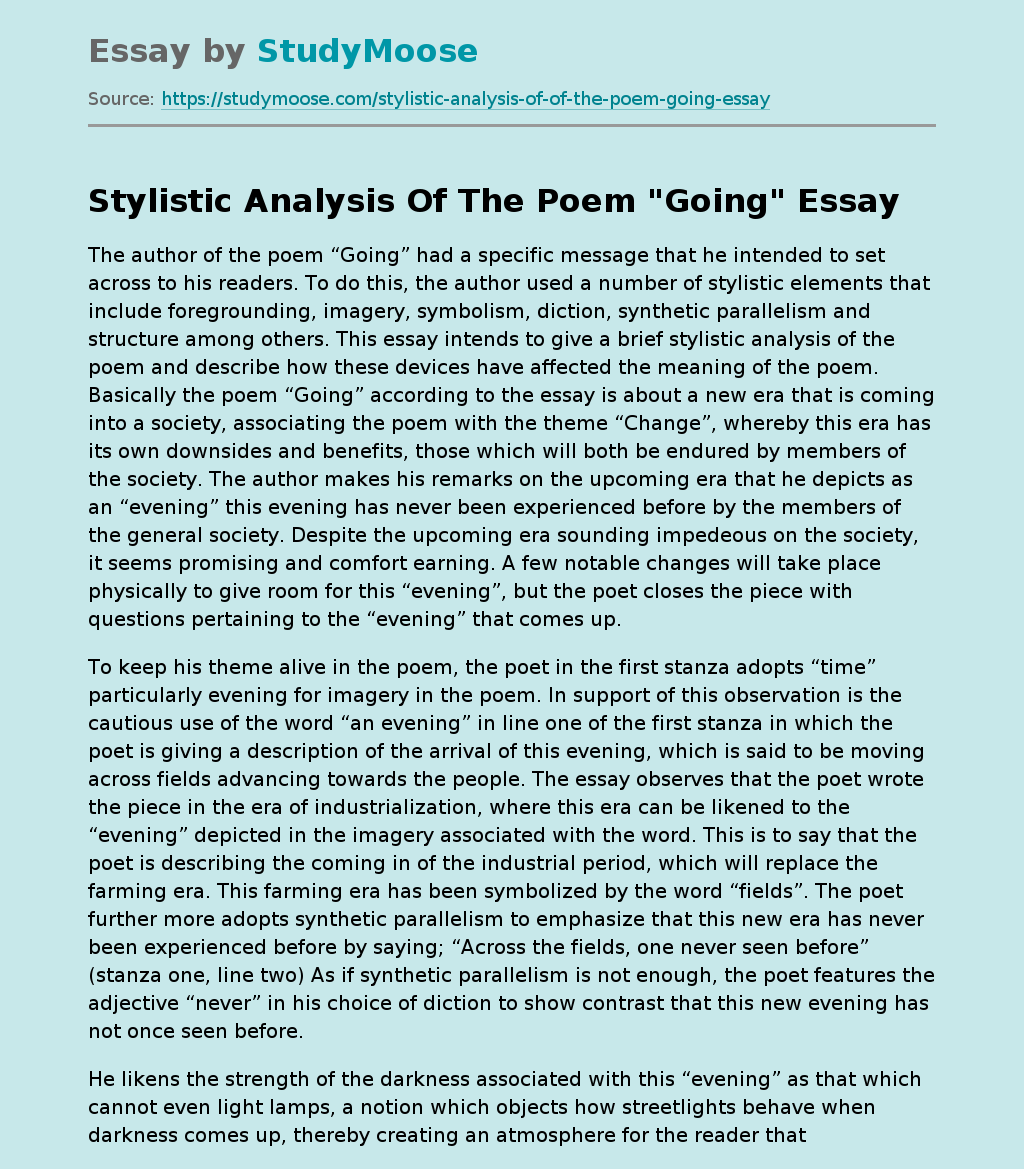