In his play, “As You Like It,” and generally in all his writing William Shakespeare uses a lot of metaphors. In, “As You Like It,” he has Rosalind who is disguised as boy named Ganymede use an interesting metaphor that explores the relationship between the consumption of time and the movement of a horse based on mood or pleasure. In my opinion the only reason that Rosalind ever uses the metaphor is to try to convince Orlando, the man she has fallen in love with and knows that he loves her, that she is wise when it comes to love and that she as Ganymede could cure his love by giving him love lessons.

Don't use plagiarized sources.
Get Your Custom Essay on Metaphors in The Play “As You Like It” Just from $13,9/Page

The metaphor proves to be effective because by the end of their conversation Orlando is convinced that Ganymede could cure him.

When Rosalind first approaches Orlando disguised as Ganymede she asks him for the time. Orlando replies by saying that there is no way to know the time in this forest because there are no clocks.

He says that it would be more appropriate to ask for the time of day. Rosalind follows this up by saying, “Then there is no true lover in the forest, else sighing every minute and groaning every hour would detect the lazy foot of time as well as a clock,”(III, ii; 275-77). By this she means that a true lover is just as good at telling time as a clock because they are always thinking about the one they love and every minute they sigh and every hour the groan.

Orlando wonders why Rosalind said the lazy foot of time rather than the swift foot of time because he thinks it would have been just as appropriate. Rosalind explains how time travels at different speeds for different people and how she could tell who time ambles for, who time trots for, who time gallops for, and who time stands still for. Orlando asks her about each speed and Rosalind gives an example of the kind of person who would have time move at each pace.

When Orlando asks who time trots for Rosalind says, “Marry, he trot hard with a young maid between the contract on her marriage and the day it is solemnized. If the interim be but a se’nnight, times pace is so hard that it seems the length of seven year,”(III, ii; 285-88). By this she means that between the time a woman gets engaged and the day of her wedding time seems to move slowly. This is because the woman is exited and anxious. A week’s time could seem like 7 years. It is my belief that time always moves the opposite of how you want it to.

When Orlando asks who time ambles for Rosalind answers, “With a priest that lacks Latin and a rich man that hath not the gout, for the only sleep easily because he cannot study and the other live merrily because he feels no pain – he one lacking burden of lean and wasteful learning, the other knowing no burden of heavy tedious penury. These time ambles withal,”(III, ii; 290-95). To amble is to walk in a leisurely way. Both the priest and rich man have fairly easy lives in which they are not very busy. Because they do not do anything time seems to move slowly.

When Orlando asks who time gallops for Rosalind replies with, “With a thief to the gallows, for though he go softly as foot can fall, he thinks himself too soon there,”(III, ii; 297-98). A thief on his way to the gallows walks as slow as he possibly can but time still seems to move so fast. This is another example of how time seems to move the opposite of how you want it too.

When Orlando asks who time stands still for Rosalind says, “With lawyers in the vacation, for they sleep between term and term, and they perceive not how time moves,”(III, ii; 300-01). Lawyers on vacation sleep away their holidays and have no sense of time. To them it is like time is not moving at all. Whenever I am on vacation I usually sleep it away and when I do wake I have no idea how much time has past.

I have been playing soccer for almost 6 years now and I have learned that at my games time either mover fast or slow. Usually when my team is winning time moves slow because I want the game to end. When my team is losing time seems to move fast because I do not want the game to win. I want my team to come back and win. I have learned that time never works the way you want it too.

Shakespeare’s metaphors add a lot of meaning to his writing. Without them he might not be as well know as he is now. The metaphor in, “As You Like It,” adds a lot to the story. It not only adds affect but also plays a role in the storyline. If Rosalind had not used she may have not been able to convince Orlando to take love lessons with her and that would make a huge change in the story.

Metaphors in The Play “As You Like It”. (2016, Jul 24). Retrieved from https://studymoose.com/metaphors-in-the-play-as-you-like-it-essay 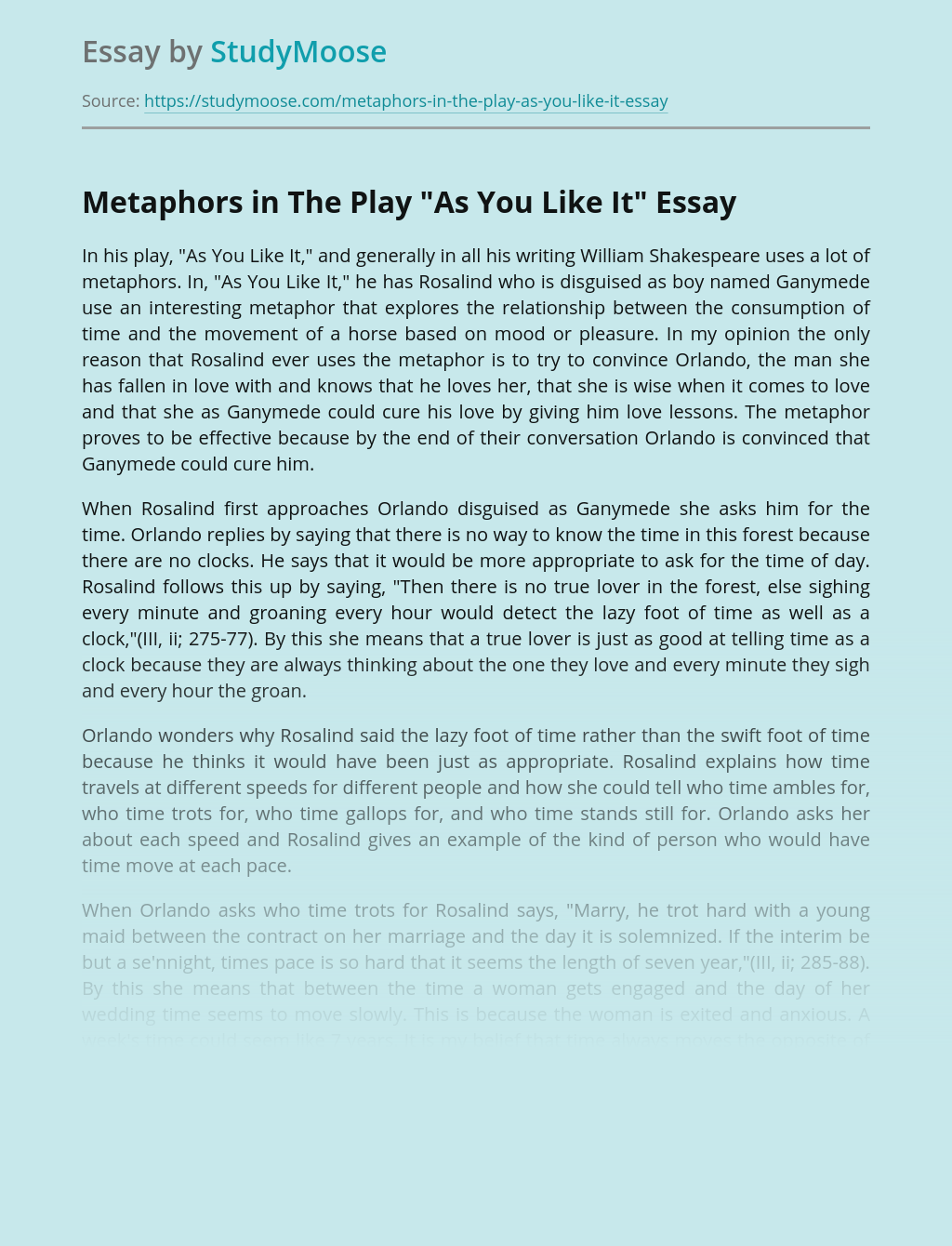