Poets use different figures of speech to convey the message of their works. Some poets use metaphors or similes to baffle the mind and force the body to feel and see the images created while others use paradox, hyperboles, or puns to create the same effect. A good poem should involve all the senses and make the mind work to find meaning. William Blake uses metaphors to make the mind work overtime to find multiple meanings in his work “To See a World in a Grain of Sand”, while Chidiock Tichborne uses paradox to baffle the mind and reiterate the single meaning in his work “Elegy, Written With His Own Hand Before His Execution”.

Don't use plagiarized sources.
Get Your Custom Essay on Figures of Speech Just from $13,9/Page

“To See a World in a Grain of Sand” by William Blake is a short poem that is filled with deep meaning. Through the use of metaphors and word choice the work seems lengthy to the mind but short to the eye. A metaphor is “a statement that one thing is something else, but in a literal sense it is not” (Kennedy 817).

There are many similarities between a grain of sand and the world such as: the world is made up of many grains of sand, both are round, and both are the same material to name a few. The two objects are also so different that that the line of poetry leaves the mind scrambling to figure out the meaning of this word combination. To figure out the meaning one must look at the literal meanings of the words and the figurative meaning of the word combinations to unscramble the riddle.

On the literal level one must look at the key words in the line such as world, grain, and sand and find their definitions and how they relate to the other words in the line. By definition world is “the Earth or Universe” grain is “a relatively small particle” and sand is “loose grains of worn or disintegrated rock” (On Line Dictionary). The connotations of these words in the context of this line help the brain to understand that an object of huge size or quantity is being compared to something very small.

One of the many meanings that could come from this statement is its hard to see the big picture of something while only looking at one small detail. This is only one meaning suggested through this powerful line. Every line in Blake’s poem is a metaphor that is filled with suggestion and deep meaning. “Hold infinity in the palm of your hand, and eternity in an hour” (3) is another metaphor Blake uses to baffle the mind. Infinity is “An unbound space, time, or quantity while eternity is “time without beginning or end” (On Line Dictionary).

It is difficult for the mind to fathom these words when looked at alone, but in the context of the poem it is even more difficult to understand how one could fit such a mass into a hand or an hour. On the literal level the mind says it is impossible to comprehend so one must look to the figurative meaning to comprehend what is being said. One of the many meanings of this line is the same as the first; it is hard to see the big picture while only looking at one small detail. Blake’s word choice also helps the meaning of the poem.

If Blake were to use similes rather than metaphors the work would take on different meaning. If the line “and eternity into an hour” (4) were changed to eternity is like an hour the work would take on a more limited meaning. When like is put into the line, eternity and hour become directly related where as in the first line eternity is trying to be fit into an hour. A similar effect would occur if the line “heaven in a wild flower” (2) were changed to heaven is like a wild flower. Heaven would be compared directly to a flower which would change the meaning of this line and therefore the poem.

Blake used metaphors and word choice to write a poem that is short, but contains depth. Every word and metaphor in “To See the World in a Grain of Sand” was carefully arranged to give the poem a broad meaning that could be interpreted in many different ways. In contrast Chidiock Tichborne uses word choice and paradox to convey his limited meaning in the work “Elegy, Written With His Own Hand in the Tower Before His Execution”. A paradox is “a statement that at first strikes us as self-contradictory but on reflection makes some sense” (Kennedy 826).

Tichborne’s work is filled with paradoxes, and is summed up by the paradox at the end of each stanza “And now I live, and now my life is done” (6). When looking at the main lines in the poem as they reoccur at the end of each stanza one wonders how it is possible to be alive now and also dead at the same time. Upon closer examination of the work the other lines help the brain figure out the paradox. To make sense of the central idea it must be looked at in the context of the other lines in the work. Each line in the work is a paradox that is key to understanding the central idea of the poem.

“My youth is spent, yet I am not old” (9) is one of the lines that mirrors the main point. Youth is defined as the condition of being young while old is defined as having lived for a relatively long time (On Line Dictionary). When looking at these definitions one understands that the narrator has used up their youth, but has not grown old. This could be restated as “And now I live, and now my life is done”. “I sought my death, and found it in my womb” (13) is another restatement of the central idea of the poem. Sought means to look for or seek out, so the narrator is looking for his end (On Line Dictionary).

Found is “to come upon something by searching, and womb is a place where something is generated, so the found his death was where he began (On Line Dictionary). After looking at these definitions we realize that the narrator has not fully lived youth let alone life and is about to die. The two poets demonstrated different figures of speech o convey their message. Blake used metaphors to give his work multiple meanings while Tichborne used paradox to restate his central idea. The two poems are very different from each other but both challenge the mind and body to find meaning making both great works of literature. 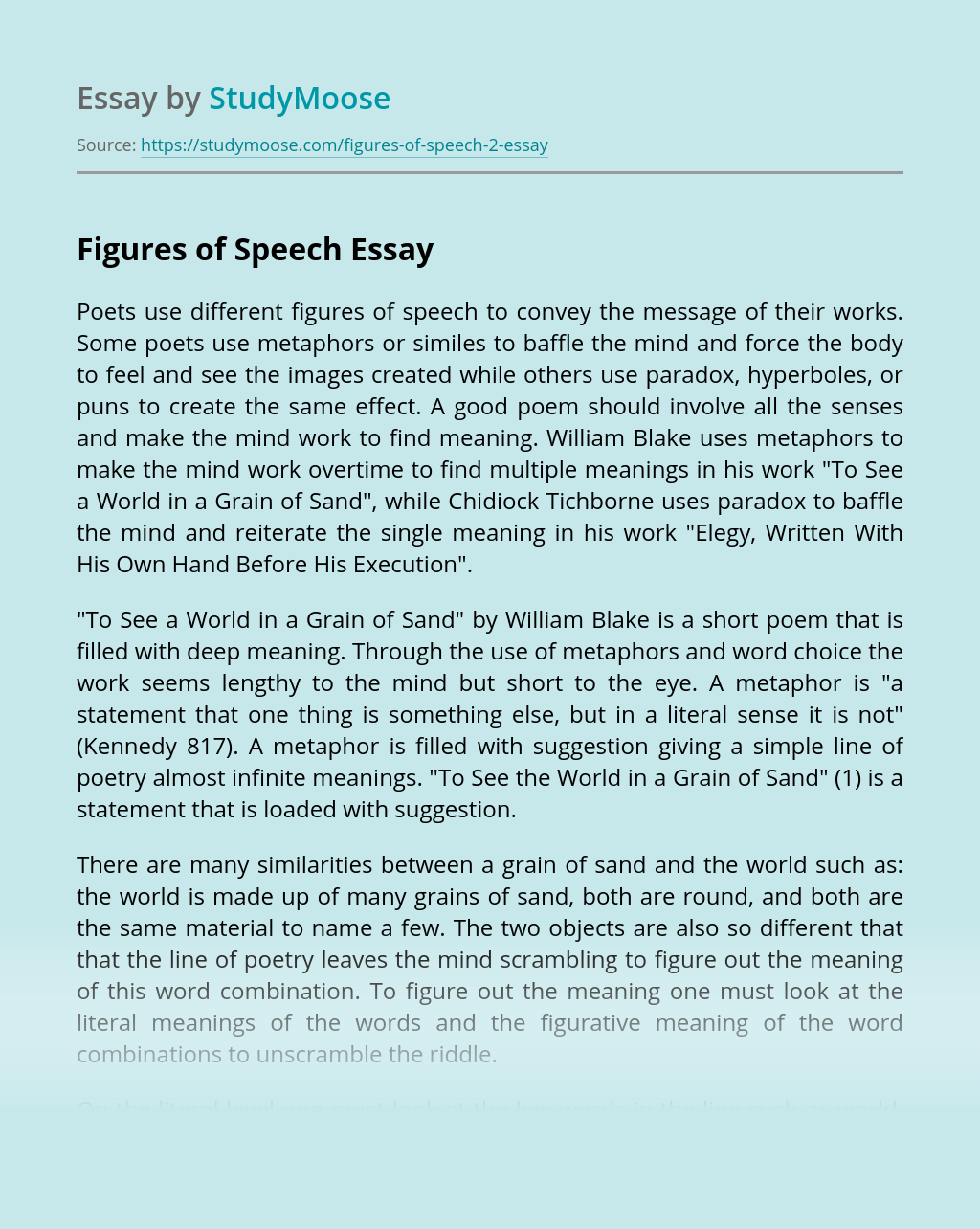 Ferrero Rocher is the one of the multinational corporation in the world via the product: Ferrero Rocher that is kind of the chocolate and the it has a luxury perception to the customer who have some of reason that are price, packaging, and etc. As it is a FMCG (Fast Move Corporation Goods) in Malaysia,...

Limitations and Contraints of Marketing

Finance: Marketing costs money, having an advertisement broadcasted on television or on a radio costs a significant amount of money. Gathering research on marketing for your business will also cost a lot of money. Organisations with low finance may have to resolve on gaining data for the organisation that is “cheap” and acquired from secondary...

Get Essay
JOIN THE OUTSIDERS

Executive Summary 1. Statement of Problem This study is commissioned to analyze the Purinex, Inc. financing plan, which is related to determine the best financing alternative for the company in securing additional cash needed to establish a partnership with a large-capitalization pharmaceutical firm. Gilad Harpaz, Purinex’s chief financial officer believes a partnership deal could bring...

The reason I chose Serpico is because I thought this book would talk about a cop trying to do the right thing, which was to change the crooked system that allowed corruption. This non-fiction talks about the criminality that takes place in this book. For example Serpico was plainclothesmen which was patrolmen working out of...