Poetry Analysis of "Introduction to Poetry"

The Poem “Introduction to Poetry” is by Billy Collins, an English poet, and it is about how teachers often force students to over-analyze poetry and to try decipher every possible meaning portrayed throughout the poem rather than allowing the students to form their own interpretation of the poem based on their own experiences. Throughout the poem, a number of literary devices are used. For example: “or press an ear against its hive”.

Using this metaphor, Billy Collins is comparing the body of a poem to the hive of a bee.

Turn in your highest-quality paper
Get a qualified writer to help you with
“ Poetry Analysis of “Introduction to Poetry” ”
Get high-quality paper
NEW! AI matching with writer

The hive of a bee appears to be something dangerous and unknown, just like a new poem, never before seen, with which one is unfamiliar. Using this metaphor, Billy Collins is suggesting that one should get an energy of the poem by reading it just as one would get a sense of energy by pressing one’s ear to a hive of a bee. The nature of a bee is particularly busy and bees are creatures that seem to be constantly on the go.

In this way, Billy Collins is suggesting that whilst the reader is digesting the poem, he or she should constantly be ‘feeling’ the poem and be busily analyzing it. By comparing the poem to a hive, he is also saying that, like a hive, a poem is full of intense life. The characteristics shared by both the two metaphoric images are very similar, thus, it is an effective comparison. The poem is effectively personified once again through the lines: “or walk inside a poem’s room”.

Here, Billy Collins suggests that the poem’s room, in other word, its body or what the poem contains, like a room of a person, defines the poem. One can learn a lot about another by viewing his or her room. Like a room too, which is private and should not be invaded, one should not invade a poem in the sense that one should not analyze it too heavily. Another effective metaphor, “I want them to water-ski across the surface of the poem” is used in this poem.

Billy Collins is comparing water-skiing across the surface of the water to the way in which he believes poems should be read which is gently and merely on the surface. This is an effective metaphor as water-skiing brings about a great sense of joy and is fun, just as reading a poem – in Billy Collins’ opinion – should be. The use of onomatopoeic devices and onomatopoeic words are abundant in this poem. For instance, “I say drop a mouse into a poem” is a line whereby the word “drop”, a very onomatopoeic word, effectively suggests that the reader of a poem must gently analyze a poem.

This is portrayed through the gentle ‘p’ sound of the word and this is therefore effective as the reader gets a sense of the gentleness Billy Collins wishes his readers had when it comes to analyzing poetry. The fact that enjambment is used throughout the poem such as in the lines, “like a colour slide or press an ear against its hive” portrays a lack of structure and therefore emphasizes the initial enjoyment one feels when reading a poem before the chore of analyzing it begins.

This is also emphasized through the fact that the poem is a free verse poem. The poem suddenly becomes much darker in the last stanza and a Billy Collins explains how teachers, students or general readers of poetry ‘torture’ a poem by being what he believes is cruelly analytical. He says, “all they want to do is tie the poem to a chair with rope and torture a confession out of it”. Here, the poem is being personified yet again and this brings about an almost human connection between the reader and the poem.

This use of personification is effective as it makes the reader feel somewhat guilty for over-analyzing a poem. This line is also a metaphor. The way in which one analyzes a poem is being compared to a victim being tied down to a chair and having a confession tortured out of them. This metaphor is effective as, like a rope pinning down a person would be very restrictive, over-analyzing a poem narrows the focus and constricts it from simply allowing it to be.

“They begin beating it with a hose to find out what it really means”. This is a continuation of the metaphor and is highly effective as it strongly portrays a sense of inhumanity through the choice of ‘hose’ as an object with which to torture as opposed to a typical weapon. One can just imagine how painful this would be and again, forces the reader to almost empathize with the poem. The poem sends a powerful message to its readers and is significantly clear in its message to not delve too deep into the message of a poem.

Poetry Analysis of "Introduction to Poetry". (2016, Sep 14). Retrieved from https://studymoose.com/poetry-analysis-of-introduction-to-poetry-essay 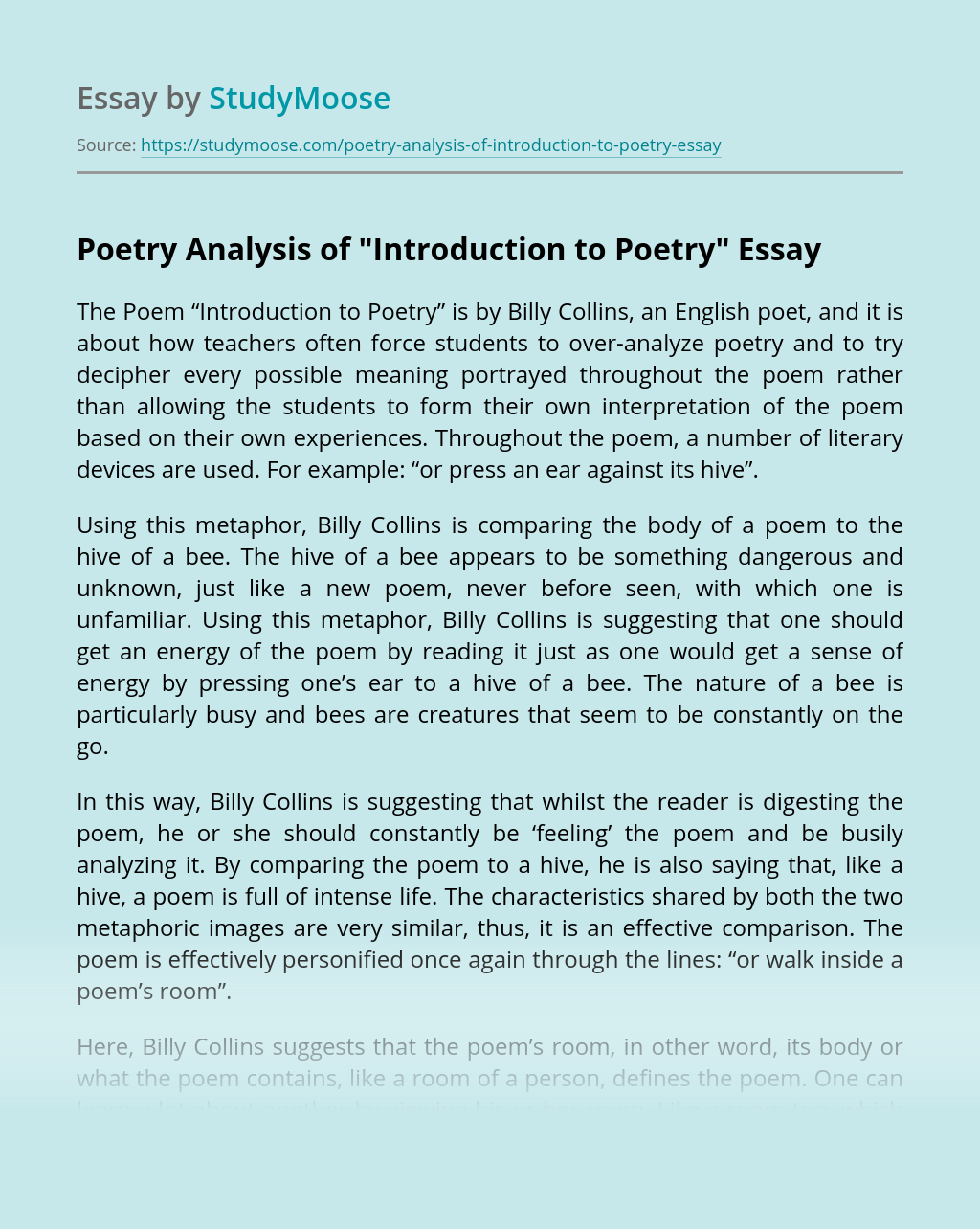 Turn in your highest-quality paper
Get a qualified writer to help you with
“ Poetry Analysis of “Introduction to Poetry” ”
Get high-quality paper
Helping students since 2015
Stay Safe, Stay Original