The family tension between Aunt Alexandra and Atticus Finch emerges when we see old attitudes come into conflict with new ones. Aunt Alexandra has grown up and lived on Finches’ Landing and so has inherited the racist and prejudice views from generations of cotton plantation owners and slave owners. The tension exhibits itself when Harper Lee makes it clear that Atticus and Aunt Alexandra have fundamentally different views on child rearing and servant supervision. The reader can feel the tension between Aunt Alexandra and Atticus in the incident where she hears the children have been to First Purchase and are invited to Cal’s house.

Don't use plagiarized sources. Get your custom essay on
“ Study of Written Language to present conflict in To Kill a Mockingbird ”
Get custom paper
NEW! smart matching with writer

Harper Lee indicates tension through Aunt Alexandra’s reaction: “putting down her embroidery” and “stared at us”. In the choice of the word “stared”, she makes clear to the reader, Aunt Alexandra’s disapproval of the children being in such a place. This is our first experience of the tension and it is Aunt Alexandra’s non-verbal way of expressing her extreme discontent.

Lee then allows us to hear their aunt directly question the children, which gives us an insight to Aunt Alexandra’s way of verbally expressing her discontent. The italicisation of the word “not” in Aunt Alexandra’s response to Jem’s statement that he would go to Cal’s house makes clear his aunts indignation and outrage. The reader can feel the tension through Harper Lee’s choice of language.

The intervention of Aunt Alexandra then causes tension between Atticus and Scout. Scout’s reaction to her aunt’s intervention is revealed through the words “Startled” and, “wheeled round”, Atticus’ “swift glance” shows his surprise at his sister’s interjection into his family life.

We then see Atticus’ physical reaction to the situation as he rises to his feet hastily. Scout tells the reader, “he pinned me to the wall with his good eye,” and “his voice was deadly.” The author’s use of the metaphorical ‘pinned’ and ‘deadly’ hints at an unusual tension between father and daughter, thus adding to the tension felt by the reader as they can sense that this is a situation which the children are not familiar with. When Aunt Alexandra proposes dismissing Cal, Harper Lee suggests extreme tension with,“His voice was even” which suggests that Atticus senses the tension himself but is not willing to accede to his sister’s wishes.

When Atticus tells his sister, “Cal’s lights are pretty good,” and “the children love her,” the reader knows that as far as Atticus is concerned, this discussion is over. The tension is relieved when “Scout breathed again.” In this incident, Harper Lee has made it clear that Aunt Alexandra still holds the racist views of generations of plantation owners and that because Atticus does not, he believes in equality, justice and fairness, there will always be tension between them.

The author suggests that if such tensions exist within the Finch family, things will be so much worse once the trial begins. The reader is acutely aware of the fragility of the relationship between blacks and whites. This incident between AA and Atticus foreshadows the episode outside the jailhouse in chapter XV, where colour, race and hereditary tradition, again lead to tension. Harper Lee’s comment about the jail, “no stranger would ever suspect that it was full of niggers,” reveals that there will be tension when new attitudes meet old…

In the author’s description of the porch outside the jail, the words “bars” and “bare bulb”, and earlier in the scene, Harper Lee’s use of the words, “solitary light,” helps us, as the reader to feel the tension building. Through the author’s language, it is clear that the mood is tense and the atmosphere menacing. The sentence “four dusty cars moving slowly in a line,” adds effect to the tense scene that is about to unfold. “Dusty,” suggesting the dry heat and the dark oppressive mood.” This sentence also gives the reader a sense of the mood of the situation. The fact that they move, “Slowly,” suggests purpose in the men, and also the dark intent of the men inside the cars. The varied sentence structure consisting of long sentences and the deep description of the scene allows the reader to sense the tension in the situation. The short sentence, “Nobody got out.” suggests tension again. This suggests anticipation, and again allows the reader to realise that the situation is very tense.

The way in which Harper Lee describes Atticus’s physical reaction to the men’s arrival shows us that he was expecting them, and that he is calm in this situation. When he folded the paper “deliberately,” she makes clear that he is taking his time and the phrase, “hat to the back of his head,” suggests that he is analysing and thinking about the situation and what the best course of action would be. The way in which Harper Lee describes the men exiting their vehicles also adds to the tension. “In ones and twos” which gives the reader the impression of a menacing group of men. But this choice of language also suggests tension, with the choice of words such as, “shadows” and light being contrasted. The contrast here highlights the tension again.

In the way that the men are described as walking towards Atticus, coming closer to him, we, as the reader sense the tension as he is still. The contrast of Atticus’ calm response to the more aggressive speech of the men highlights the menacing tone of their intent. “You know what we want,” and “the hell he is,” further reinforcing our interpretation of what the men are wanting. Harper Lee makes it clear that Atticus is calm when Scout tells us, “My father’s voice was still the same”

The reader now senses a change in mood and tone, the tension is dispelled and the reader hears the voice of an innocent child who knows nothing of the cruelty and prejudice of adults. Atticus, in response to unexpectedly seeing his children, reveals for the first time his own vulnerability. The simile “like an old man” allows the reader to see he is taken aback. His fingers are uncharacteristically “trembling”. This is the first time in this whole incident that Atticus has shown his own genuine reaction to the tension. The repetitions of the phrase “go home” when speaking to Jem, makes clear the tension. Harper Lee’s description of the face-off between father and son is similarly tense and adds to the readers’ awareness of the situation.

Ironically, it is Scout’s informal “hey Mr Cunningham” that ultimately brings dissipates the tension between the mob and Atticus, and between Black and White.

Harper Lee uses the voice of the innocent child again, when in chapter XXI, in the courtroom, Scout, as the narrator of the novel is instrumental in portraying the tension in the moment.

In order to suggest the degree of the tension, Lee uses the simile, “like underwater swimmers,” to remind the reader of the earlier incident in Part I of the novel, where it is Atticus who is the underwater swimmer and where the outcome is similarly unpredictable. The dreamlike quality and Judge Taylor’s “far away”,” tiny,” voice suggests for the reader the degree of uneasiness surrounding the verdict.

The arrival of the jury, and Scout’s revelation that they fail to make eye contact with Tom, further intensifies the tension in the courtroom and for the reader, ends what hope we have for Tom Robinson’s victory in this court case.

It is through the repetition of “handed” and the use of ellipsis in the giving of the verdict, that highlights the reader to the seriousness of the situation. As Harper Lee describes Jem’s physical reaction to the verdict being given, the reader feels a sense of how unjust the verdict really is. The use of the onomatopoeia, “snapped” and the sharp sound of “shut,” draws the attention of the reader fully to Atticus’ unease.

The Chapter closes with Atticus walking quickly, towards the exit and the reader again, senses the tension between Atticus, and the white people of the community. The reader is clear that it is indeed, a “lonely walk.” The isolation that Atticus feels as he hurries out, contrasts sharply with the quiet respect of the Black community as they stand in admiration and appreciation for a white man who treats a Black man as his equal.

In conclusion, the reader is in little doubt about the various tensions which run through the novel and which work to draw attention to Harper lee’s purpose, which is to reveal the realities, and injustices of life in the deep south of 1930’s America.

Study of Written Language to present conflict in To Kill a Mockingbird. (2020, Jun 02). Retrieved from https://studymoose.com/study-written-language-present-conflict-kill-mockingbird-new-essay?post 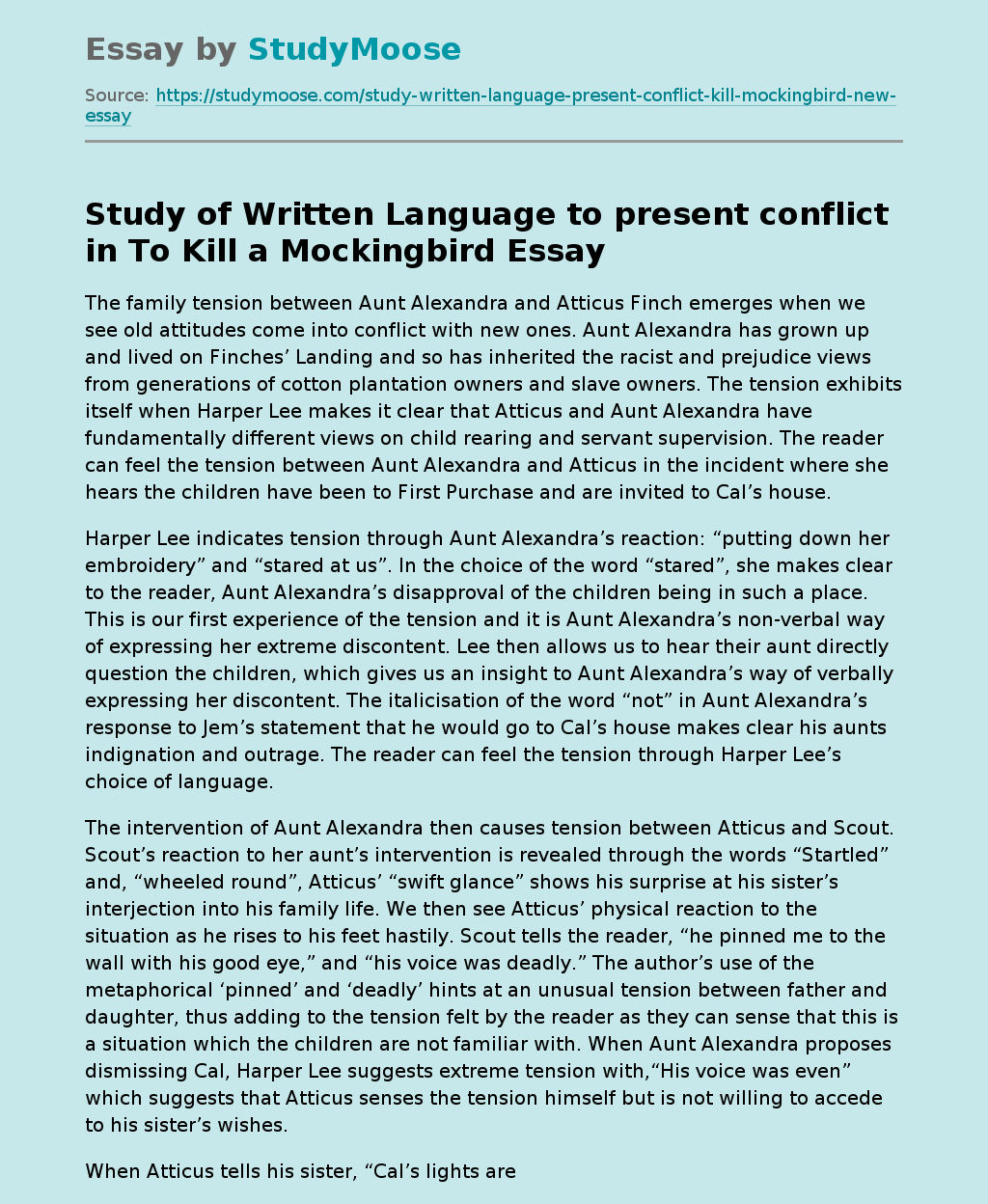