A stroke, also known as the sudden loss of brain function, is a medical condition that affects the brain. A stroke occurs when the blood supply to part of the brain is interrupted or severely reduced, depriving the brain tissues of oxygen. Within minutes, the cells of the brain normally die due to the absence of oxygen. Most studies show that a lack of oxygen in the brain is attributed to an obstruction in the flow of blood. (Edlow, 2008)

Hippocrates, often called the father of medicine, discovered strokes over 2,500 years ago.

Turn in your highest-quality paper
Get a qualified writer to help you with
“ Stroke and It’s Causes ”
Get high-quality paper
NEW! AI matching with writer

During this time, a stroke was called apoplexy, which means “struck down by violence” in Greek due to the fact that a person developed sudden paralysis and change in well-being. Doctors had little knowledge of the anatomy and function of the brain, the cause of a stroke, or how to treat it. It was not until the early 1600s that Jacob Wepfer discovered that patients who died with apoplexy had bleeding in the brain.

Hippocrates also discovered that a blockage in one of the brain blood vessels caused apoplexy. Physicians in medical science studied the symptom and treatment of apoplexy, then in 1928, apoplexy was split into categories based on the cause of the blood vessel problem. This led to the terms stroke or “cerebral vascular accident (CVA).” A stroke is often referred to as a “brain attack” because it is caused by a lack of blood supply to the brain. The term brain attack also conveys an extremely urgent attention for immediate action.

Although there are many different types of strokes, eighty-five percent of strokes are Ischemic strokes. When the artery that feeds the brain is ruptured or blocked, causing reduced blood flow (ischemia). TIA, mini stroke or transient ischemic attack, is a minor stroke that occurs when a blood clot blocks the artery for a less than five minutes. Thrombotic strokes are caused by a blood clot (thrombus) in one of the arteries that supplies blood to the brain. The clot blocks blood flow to the brain. Blood clots usually form in the arteries damaged by plaque. Embolic strokes are caused by a wandering clot (embolus) that’s formed usually in the heart or neck arteries. This occurs when sections of arteries have been affected by atherosclerosis, a common disorder characterized by hardening of arteries as a result of a buildup of fatty deposits or high cholesterol. Clots are carried in the blood stream and blocks the blood vessels leading to the brain restricted by debris swept from the clot (Adams CT al., 1993).

Clots also cause arterial fibrillation know as a flutter, or an abnormal heartbeat; a heart rhythm usually fast paced and irregular. Low blood flow (systemic hypoperfusion) happens when the heart pumping system fails and too little blood reaches the brain. This is how a heart attack can cause a stroke. When a stroke occurs, the majority of activities coordinated by the affected part of the brain, such as speech or movement, are lost (Edlow, 2008). The effects of a stroke vary depending on the type of stroke suffered. The effects on the left side hemisphere of the (cerebrum) large cranial cavity occupying the brain controlling the motor sensory are different from the right hemisphere.

The effects also vary in the context of social and economic dimensions. The left hemisphere is responsible for various actions in the brain, thinking, movement, speech, sensation, and sexual functions. An individual that has a stroke on the left side hemisphere will have difficulty speaking reading and processing their thoughts due to paralysis or weakness on the right side of their body. On the right hemisphere stroke affects the left side of the body by paralyzing or weakness. Subsequently, it causes problems in vision; differentiating between up and down, depth and distance front and back; complications in understanding mapping, short term memory, forgetfulness and difficulties in judgement (Lindley, 2008).

Many factors play a key role in the risk of having a stroke, high blood pressure, cigarette smoking, exposure to second hand smoking, high cholesterol, obesity, diabetes, sleep apnea, cardiovascular disease, birth control pills. Family history and heart attacks is another major factor; African Americans have a higher risk of having a stroke more than people of other races. Men have a higher risk of stroke than women. Women are usually older when they have strokes, and are more likely to die of strokes than men. People who have had a stroke experience memory loss, others may have difficulty speaking or making the proper judgment. A stroke can also cause an individual to have less control over the muscle in their mouth and throat making it difficult to talk and swallow. Some may experience slurred speech (dysarthria), this is incoordination of the muscles in the mouth. Difficulty with speaking is (aphasia) understanding speech, reading or writing is challenging.

Paralysis or the loss of muscle movement due to the lack of oxygen to the brain can cause you to become paralyzed on one side of the body, lose control of muscles in the face, arms, or legs. This can also be challenging when getting dressed walking or eating. People that have experienced a stroke may have numbness in affected parts of their bodies caused by the stroke. The stroke causes you to lose feeling in your arms and you may experience a tingling sensation in the arm, this is called (CPS) central pain system. Although there are many different kinds of strokes, every stroke is different for anyone who have experienced a stroke. Treatments of strokes can vary depending on the type of stroke an individual has had. First you will be given a neurologist who will assess the type of stroke and steps will be given to stabilize vital signs, including giving medicines.

For example if an individual has, had an ischemic stroke they will be given a medicine called tissue plasminogen activator (T-PA), that can increase the chances of recovery. Treatments for an individual who has had a thrombotic stroke can be given medicines called Heparin and Warfarin. Heparin is a blood thinner that is prescribed for hospital use only, and given intravenously or a shot. Warfarin is a pill that is taken by mouth depending on the situation, this can be taken for a short period of time or for the remainder of the individuals’ life. Treatment for an individual that had an embolic stroke anticoagulants can be given for treatment as well.

Major strokes ultimately change the affected patients’ life. Stroke patients recover to a certain extents in most cases, but life as one may have known it, does not resume to normalcy for every patient. From the effects it has on the body, it also affects the patient socially, and economically. In cases where the breadwinner of the family is affected the family is bound to undergo difficulties financially.

In 2008 a new drug on the market NeuroAid a recovery stimulator has proven to increase the production of new neurons in the brain and the formation of new connections. The effects of NeuroAid have shown to improve the outcome of recovery in clinical trials. Patients on NeuroAid have a 2.5 times higher chance of reaching an independent life after taking this drug. (U.S.FDA resources, 2008). In my research on the study of strokes I believe whole heartedly that there was more that the physicians at Yale New Haven hospital could have done for my mom who is a surviving stroke patient. After numerous CT scans and MRI’s being told that my mom was fine, upon my research of this paper looking back I feel as though the physicians at Yale could have taken a different approach. In my research reflecting back there was no preventative measures taken neither where any preventative measures explained nor offered.

However while doing my research on Strokes, I discovered a lot of things that I wish I would have known. To gain, and better my knowledge on stroke awareness. Due to my mom’s age she is not entitled to disability benefits. Medicare programs also known as Title 18 of the Social Security Act, finances medical care for three class of people, disabled individuals of any age who are entitled to disability benefits, people of any age who have permanent kidney failure. My mom did not qualify for any of these categories. Medicaid Title 19 of the Social Security Act, Medicaid is the United States public health insurance program for the indigent. Each state has its own criteria for determining eligibility. Federal guidelines determine an individual’s eligibility according to income, bank accounts, and real estate property. (Leiyu Shi, Douglas A. Singh).

My mom was transferred to a Rehabilitation Center after being discharged from Yale New Haven Hospital. At the Rehabilitation Center she underwent different types of therapies. Physical therapy which was needed to restore walking skills and range of movement, speech therapy which was used to better her vocabulary, occupational therapy was needed for the remembrance of activities of daily living. My mom’s experience at the Rehabilitation Center was a tough transition. Adjusting to a new life as a stroke patient was very emotional, difficult, frustrating and sad all at once. My mom is now home and I am taking care of her, although she is not 100 percent she definitely overcame a lot and I am grateful. 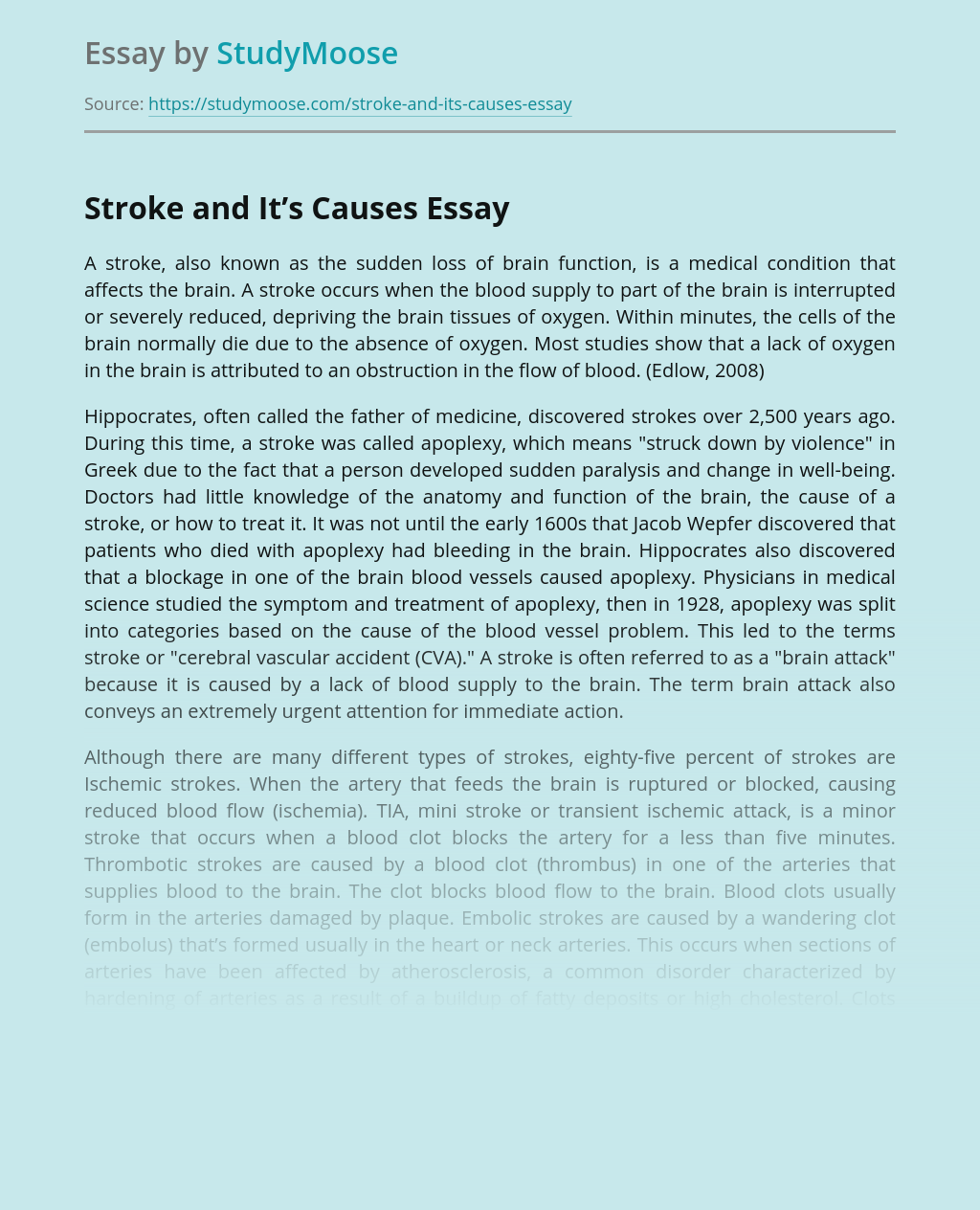 Turn in your highest-quality paper
Get a qualified writer to help you with
“ Stroke and It’s Causes ”
Get high-quality paper
Helping students since 2015
Stay Safe, Stay Original