68-year-old gentlemen called Mr Greens, who has suffered a right side ischaemic stroke. He is experiencing weakness in the left side, dysphasia and sporadic periods of unconsciousness and has been admitted to the medical ward.

Nursing care will be explained over the first 48 hours of Mr Greens’ care with evidence-based rationales from academic sources. The integration of the multidisciplinary team will show the importance of ongoing treatment and rehabilitation of Mr Greens.

There are five types of ischaemic stroke (Smelzter et al 2008, p.2206). They include large artery thrombotic strokes occurring in the blood vessels of the brain; small artery thrombotic stroke penetrating one or more blood vessels; cardiogenic embolic strokes related to dysrhythmia; cryptogenic strokes of unknown cause and others related to illicit drug taking, migraine and cutting of carotid or vertebral arteries (Smeltzer et al 2008, p.2206).

Atherosclerosis builds up fatty deposits in the coronary artery, causing them to narrow (Harris, Nacy & Vardaxis 2006, p.151) and is predominant cause of ischaemic stroke (Newby & Grubb 2005, p.38). Symptoms of ischaemic stroke may include confusion, headache, numbness on one side of the body, slurred speech and poor visibility (Smeltzer et al 2008, p.2207).

There is growing concern in the health care industry in regards to stroke being the second major cause of death worldwide (Black’s Student Medical Dictionary 2004, p.

334). Ischaemic stroke is considered to be an urgent health issue (Smeltzer et al 2008, p.2206) with evidence to show that immediate treatment can improve its negative effects on the person (Hairon 2008, p.19). Primary care, prevention and education is being directed at
high risk groups (Hairon 2008, p.19) including people with high blood pressure, smokers, heavy drinkers, diabetics, are obese or have a history of coronary or heart disease (Black’s Student Medical Dictionary 2004, p.334).

In the following essay I will discuss the pathophysiology relating to the symptoms of a 68 year old gentleman called Mr Greens, who has suffered a left sided ischaemic stroke. He is residual symptoms include, right sided hemiparesis of his arm and leg, dysarthria and short term memory loss and has been admitted to the stroke unit. The integration of the multidisciplinary team will show the importance of ongoing treatment and rehabilitation of Mr Greens.

When blood flow to the brain is interrupted an ischaemic stroke occurs, setting off a chain of events known as the ischaemic cascade (Smelzter et al 2008, p.2207). Thrombosis occurs when a build up of fat deposits form plaque on the endothelial lining of blood vessels, known as atherosclerosis, causes stenosis of the artery (Black, Hokanson-Hawk & Jeene 2001, p.1954). Emboli may break away from the thrombus, travelling up and blocking narrower vessels (McCance & Hueber 2002, p.506).

Trans ischaemic attacks (TIA) are warning signs to a major ischaemic stroke, lasting minutes to an hour and may occur days, weeks or months before the permanent stoke (Swearington 2008, p.349). When blood flow is less than 25ml per minute aerobic respiration is diminished and lactic acid is produced by the mitochondria (Smeltzer et al 2008, p.2207). Adenosine triphosphate (ATP) is not produced in sufficient quantities and fails to fuel the depolarization process, leading to cell malfunction (Smelzter et al 2008, p.2007). The infiltration of excessive calcium and glutamate can generate free radicals and enhance the stroke process (Farrell 2005, p.1897).

Left sided hemiplegia in Mr Greens’ case is caused by infarction in the right hemisphere of his brain with nerve fibres crossing over in the pyramedial tract when passing to the spinal cord from the brain (Black, Hokanson Hawk &
keene 2001, p.1956).

Dysphasia; or partial speech loss (Harris, Nacy & Vardaxis 2006, p.571); usually occurs in the Broca’s and Wernicke’s area of the left hemisphere of the brain, although it can be affected by the dominant hemisphere (Black, Hokanson Hawk & Keene 2001, p.1958). Mr Greens may have receptive dysphasia where he has trouble processing verbal or visual information; or expressive dysphasia where he cannot express his thoughts written or spoken (Holland et al 2003, p.109).

The third step in the nursing process involves using knowledge and skills to care for the patient followed by evaluating the strategies of care used and comparing the results. The possibility of changing the care to achieve a better out come is then considered (Holland et al 2003, p.21). All care is documented and collaboration with the multidisciplinary team is essential for ongoing rehabilitation and treatment (Holland et al 2003, p.20).

In the case of Mr Greens, the nursing care requirements for he to return home will be examined focusing on maintaining a safe environment, mobilizing and communication. Mr Green’s dependence/ independence continuum is assessed on his ability to maintain these three areas (Holland et al 2003, p.9), indicating that he is very dependent on nursing assistance. Rationales for the nursing actions will be documented using evidence based academic literature. Having incurred hemiparesis or paralysis on one side of the body (Harris, Nacy & Vardaxis, 2006, p. 809) affecting his right side, nursing care must consider Mr Greens’ inability to perform regular activities with ease.

During the acute phase of one to three days, monitoring of all body systems is implemented and a neurologic flow chart maintained (Smeltzer et al 2008, p.2215). This monitors consciousness, speech, eye opening and reactions to light, pulse, temperature, respiration, blood pressure, mobility, skin integrity, any bleeding and a fluid balance chart for intake and elimination of fluid (Smeltzer et al 2008, p.2216). Observation of Mr Greens’ blood pressure is a priority as chronic hypertension may increase the severity of artherosclerosis; therefore treatment to lower high blood pressure can reduce the impact of his condition (Wiebers, Feigin & Brown Jr 2006, p.315). 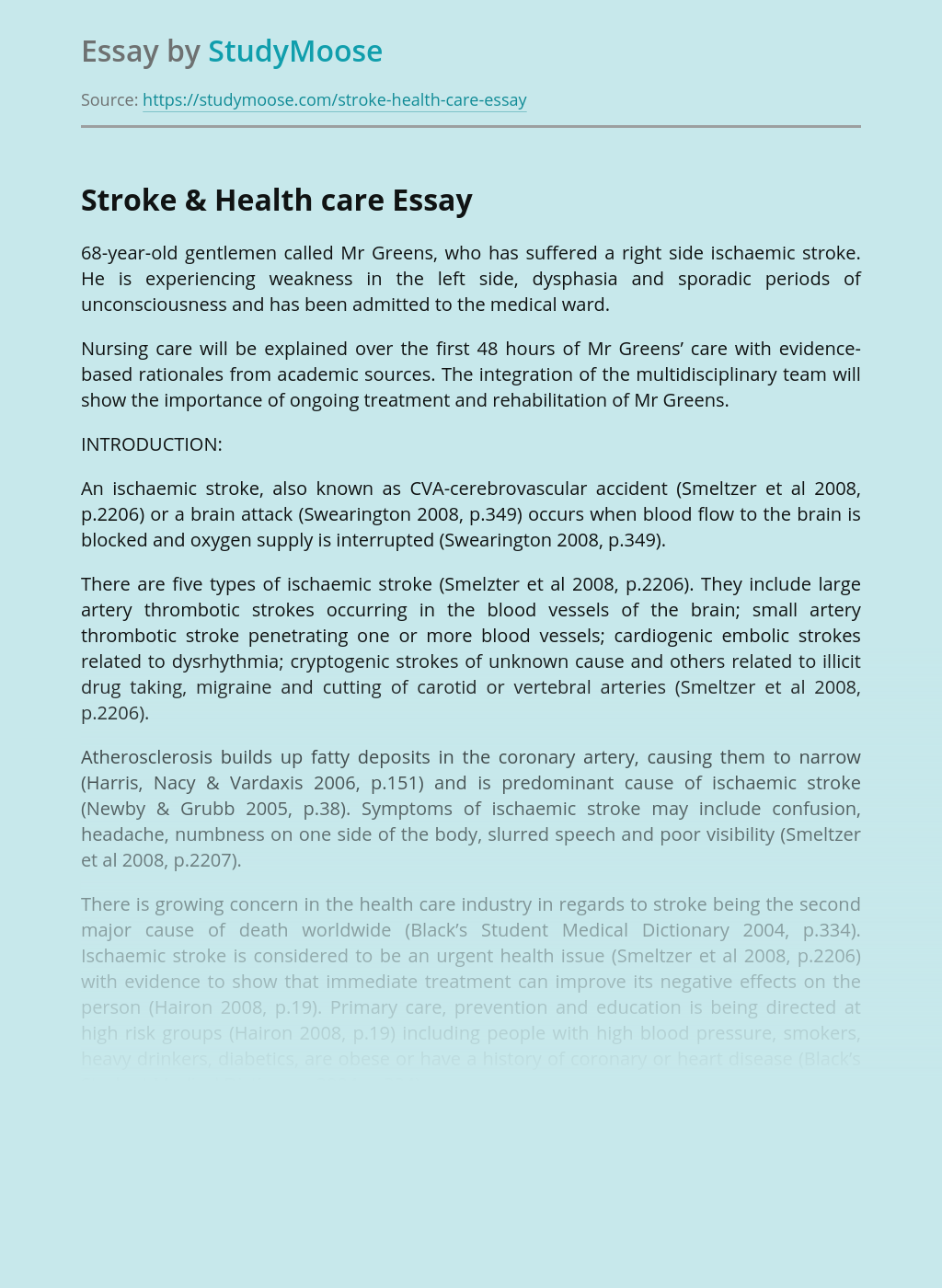