Patient Safety in Rural Nursing Because of Nursing Shortage

The United States is in the midst of a nursing shortage that is being increasingly discussed in the context of declining healthcare facilities in the nation. Over 1 in 7 hospitals (15%) report a severe RN nursing shortage with more than 20% of their nursing positions vacant and 80%-85% of hospitals report that they have a nurse shortage This shortage is predicted to intensify over the next decade or two as nurses belonging to the generation of baby boomers retire.

The Nursing Management Aging Workforce Survey released in July 2006 by the Bernard Hodes Group reveals that 55% of surveyed nurses and nurse managers reported their intention to retire between 2011 and 2020 (AACN, 2006).

Don't use plagiarized sources. Get your custom essay on
“ Patient Safety in Rural Nursing Because of Nursing Shortage ”
Get custom paper
NEW! smart matching with writer

In April 2006, officials with the Health Resources and Services Administration (HRSA) released projections that the nation’s nursing shortage would grow to more than one million nurses by the year 2020 (HRSA, 2003). Nursing colleges and universities are struggling to expand enrollment levels.

In the report titled “What is Behind HRSA’s Projected Supply, Demand, and Shortage of Registered Nurses? ” analysts show that all 50 states will experience a shortage of nurses to varying degrees by the year 2015 (AACN, 2006).

Factors that are causing a decrease in the supply of nurses are: the declining number of nursing school enrollees, graduates and faculty; the aging of the registered nurse workforce; work environment issues leading to job burnout and dissatisfaction; high nurse turnover and vacancy rates; and declines in relative earnings (HRSA, 2003).

Due to this critical imbalance between the supply and demand of nurses, the United States is today facing a nursing shortage crisis.

According to a paper published by the National Clearinghouse for Frontier Communities, “Impacts and Innovations in Frontier America” (December 2004), nurse shortages in frontier and rural communities derive not only from the current national shortage of nurses but also a long-standing trend favoring rural-to-urban migration of the educated, skilled workforce. There is also the issue of money. When examined by rurality, LPNs in rural settings ($21,941) report an income 23% lower than that reported by LPNs in urban settings ($28,408) (NCSBN, 2006).

A large number of rural communities are losing existing employment and education opportunities and the paper suggests that the community context of a nurse shortage can be addressed only through community-based development approaches as well as the crafting of healthy rural policies. The Robert Wood Johnson Foundation published a report titled “The American Nursing Shortage” with the help of its researchers Bobbi Kimball and Edward O’Neil.

According to this report, even when some people feel a calling for the professions such as nursing, they are deterred by certain dimensions of the lifestyle, such as low pay, compulsory mobility and the need for service in rural areas. Available data and literature suggest that the impact of the nursing shortage on rural and frontier communities varies greatly from community to community. IN some rural places, there is no difficulty in filling vacancies but there may be just a few good paying jobs. However, in most rural areas, recruiting for openings is estimated to take about 60 percent longer to fill than in urban areas (Long 2000).

Differences remain when looking at highest degree received; 44% of frontier nurses’ highest degree is the ADN, in contrast with 34% of the non-frontier nurses. And, while the percentage of nurses who have earned a bachelors degree is slightly lower among frontier nurses (30% frontier, 33% non-frontier), the percentage who has earned masters degrees is also lower among frontier (7% frontier compared with 10% non-frontier) (FEC, 2003). At Prairie Vista Nursing Home in Holyoke, Colorado, a town of about 1,900 people about 130 miles northeast of Denver, administrators reportedly had to work double shifts to cover shifts after a nurse retired.

Recruiting nurses to work in rural areas is difficult to begin with; and, when urban-trained nurses enter rural practice, they often find they are ill-prepared for the demands of the job, contributing to job dissatisfaction and turnover. Once there, they typically find it difficult to access continuing education opportunities that fit their needs. “When educators bring their knowledge to us, they often do not realize that we practice differently than urban centers do” (rural nurse, quoted in Molinari 2001). In the rural setting, nurses typically fill multiple roles.

There is a need for a broad range of skills and cross training in multiple jobs. “Rural nursing requires a high level of generalist skills and critical thinking” (Fahs, Findholt et al. 2003). Another issue is that the ethnic composition of the rural nurse workforce does not correspond with the population it serves. The ANA Rural Nursing module identifies five factors that affect rural nursing practice: threats to anonymity and confidentiality; traditional gender roles; geographic isolation; professional isolation; and scarce resources (Bushy 2004).

Patient safety for nursing shortage in rural settings: Surveys and studies published recently confirm that the shortage of registered nurses is impacting the delivery of health care in the U. S. and negatively affecting patient outcomes. Research now shows that how well patients are cared for by nurses affects their health, and sometimes can be a matter of life or death. These studies have found that (HRSA, 2003):

• A total of 53% of physicians and 65% of the public cited the shortage of nurses as a leading cause of medical errors (Harvard School of Public Health, 2002,); A higher proportion of nursing care and a greater number of hours of care by nurses per day are associated with better outcomes for hospitalized patients (Needleman et al. , 2002); • Nursing actions, such as ongoing monitoring of patient’s health status, are directly related to better health outcomes (Kahn et al. , 1990) ; • 126,000 nurses are needed immediately to fill vacancies at our Nation’s hospitals. Today, 75% of all hospital vacancies are for nurses (American Organization of Nurse Executives, 2002); Low nurse staffing levels have contributed to 24% of unanticipated events in hospitals that resulted in death, injury or permanent loss of function (Joint Commission of Accreditation of Healthcare Organizations, 2002);

• Patients who have common surgeries in hospitals with low nurse-to-patient ratios have an up to 31% increased chance of dying. Every additional patient in an average hospital nurse’s workload increased the risk of death in surgical patients by 7% (Aiken et. al. , 2002); Low nursing staff levels were a contributing factor in 24% of hospitals’ reports of patient deaths and injuries since 1996 (Joint Commission of Accreditation of Healthcare Organizations, 2002);

• Less nursing time provided to patients is associated with higher rates of infection, gastrointestinal bleeding, pneumonia, cardiac arrest, and death from these and other causes (Needleman et al. , 2002); and • Nurse executives surveyed indicated that staffing shortages are contributing to emergency department overcrowding and the need to close beds (American Organization of Nurse Executives, 2002).

The Joint Commission on Accreditation of Healthcare Organizations, 2002 has issued a warning that failure to address the problem of nursing shortage in rural areas will result in increased deaths, complications, lengths-of-stay and other undesirable patient outcomes. JCAHO examined 1,609 hospital reports of patient deaths and injuries since 1996 and found that low nursing staff levels were a contributing factor in 24% of the cases (Joint Commission on Accreditation of Healthcare Organizations, 2002). New research indicates that a shortage of registered nurses prepared at the baccalaureate and higher degree level is endangering patients.

In an article in the September 24, 2003 issue of the Journal of the American Medical Association, Dr. Linda Aiken and her colleagues at the University of Pennsylvania found that patients experience significantly lower mortality and failure to rescue rates in hospitals where more baccalaureate-prepared nurses provide direct patient care. At least 1,700 preventable deaths could have been realized in Pennsylvania hospitals alone if baccalaureate-prepared nurses had comprised 60% of the nursing staff and the nurse-to-patient ratios had been set at 1 to 4.

Unfortunately, only 11% of PA hospitals have more than 50% of the nursing staff prepared at the baccalaureate level ( Institute of Medicine, 2003). A survey titled “Views of Practicing Physicians and the Public on Medical Errors”, conducted by the Harvard School of Public Health and the Henry J. Kaiser Family Foundation reported in the December 12, 2002 issue of the New England Journal of Medicine found that 53% of physicians and 65% of the public cited the shortage of nurses as a leading cause of medical errors.

Overall, 42% of the public and more than a third of U. S. octors reported that they or their family members have experienced medical errors in the course of receiving medical care (AACN, 2006). Nurse researchers at the University of Pennsylvania determined that patients who have common surgeries in hospitals with high nurse-to-patient ratios have an up to 31% increased chance of dying. Funded by the National Institute for Nursing Research, the study found that every additional patient in an average hospital nurse’s workload increased the risk of death in surgical patients by 7% (AACN, 2006).

According to an extensive study by Dr. Jack Needleman and Peter Buerhas, published in the New England Journal of Medicine in May 2002, a higher proportion of nursing care provided by RNs and a greater number of hours of care by RNs per day are associated with better outcomes for hospitalized patients (AACN, 2006). Conclusion: Available data and literature suggest that the issue of nurse shortage is a national one. Yet, the impact of nurse shortage is better seen in the rural areas where nurses are not well paid, existing nurses are not well qualified and patients are dependent on local medical facilities.

Because most frontier and rural communities are distant from hospitals, residents may rely on non-hospital based care settings for a greater proportion of their care than their urban counterparts. Due to these reasons, nurse shortage in rural areas has endangered patient safety. Nurses are the primary source of care and support in the health care sector and hence, a sufficient supply of nurses is critical in providing the national and especially the rural population with quality health care. Nurses are expected to play an even larger role in the future.

Patient Safety in Rural Nursing Because of Nursing Shortage. (2017, Mar 07). Retrieved from http://studymoose.com/patient-safety-in-rural-nursing-because-of-nursing-shortage-essay 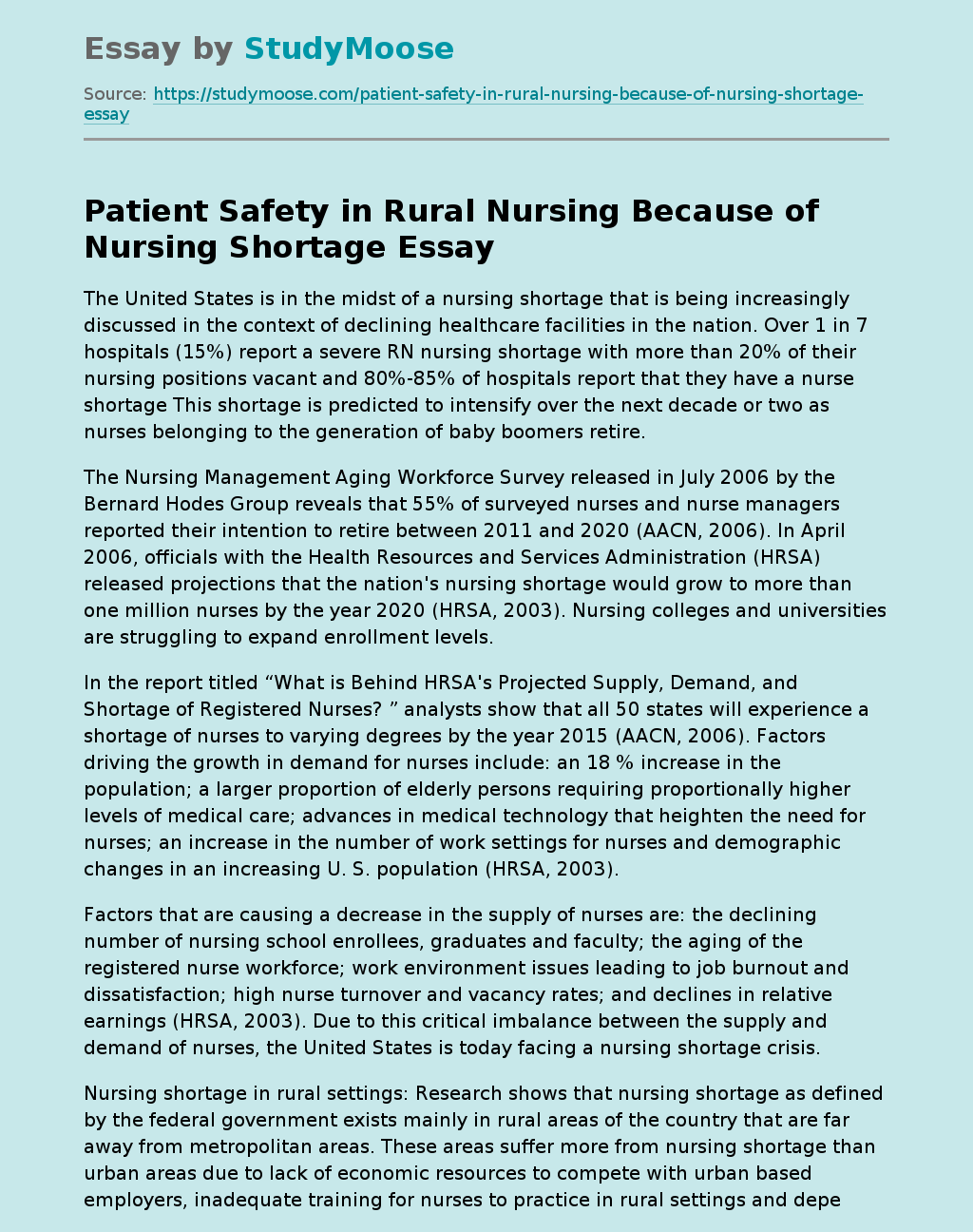