This essay will attempt to define four essential words, commonly used when focusing on international relations and politics; State, Sovereignty, Anarchy and Nation. There are many objective perspectives to any word, which is why the general definition is important for the understanding of words with great importance.

State, to begin with, refers to three different meanings that depend upon its context; “A legal person, a political community, and a government” (Bayliss et al, 330)[1]. However, the word state is generally defined as the civil government of a country.

Don't use plagiarized sources. Get your custom essay on
“ Sovereignty, Anarchy and Nation ”
Get custom paper
NEW! smart matching with writer

With this in mind, the current meaning of state is still remarkably ambiguous and profoundly misunderstood. “’Primitive’ societies are imagined as suffering a fundamental ‘lack’, they are incomplete, they fail as real societies, they are without history: they are without state” (Neocleous, 2)[2]. This quote suggests that without state, there is no hope for success or survival within a society.

Some ask the origin of the concept of the state to help their understanding although the famous classical philosopher; Aristotle believed the formation of a state to be normal and paid no attention to its origin in his work.

“We can reject the belief that the state is an expression of the “genius” of people or that it arose through a “historical accident.” Moreover, it was not a unique event but a recurring phenomenon: states arose independently in different places and at different times. Where the appropriate conditions existed, the state emerged” As taught by Robert L. Carneiro[3]

Secondly, sovereignty represents the supreme power of the state to exact obedience from the people who reside within it.

The power of the state is incontestable. The state also has a right to demand fidelity from its citizens. Since there is no universally agreed definition; the term sovereignty can be contested. Although Thomas Hobbes defined what he considered the basis of a political body as ‘the most high and perpetual’ Or with an international perspective sovereignty can mean “independence, i.e., non-interference by external powers in the internal affairs of another state” (Benoist, 100)[4]. Read about anarchists demand the impossible

According to F. H. Hinsley, Sovereignty is not fact. It is a concept which men in certain circumstances have applied a quality they have attributed or a claim they have counter-posed to the political power which they or other men were exercising[5].

Violation of the command of the state would result in grave consequences or other punishment, also known as ‘internal sovereignty’. Internally, the state is absolute in comparison to any individual or establishments, living or functioning within its geographical boundaries, they have to live and function under the laws and command of the state. It should also be noted that none of these establishments can claim dominance over or to have invulnerability to the state.

Next; Anarchy, the theory of life and manner under which social interactions exist without government intrusion or support. It is not disorder, nor terrorism, and has no connection to illegitimate crime or violence; anarchy is simply activity that exists without being governed, “absence of government” (Bayliss et al, 36)[6]. Webster’s Third International Dictionary defines anarchism concisely as, “a political theory opposed to all forms of government and governmental restraint and advocating voluntary cooperation and free association of individuals and groups in order to satisfy their needs.”[7] Harmony in a society can be acquired, not by adherence to laws or any form of authority, but by giving such governance permission to control the masses. So, where did the concept of anarchy originate? Could it be intrinsic in human nature? It could be people are naturally opposed to obeying orders from figures of authority? Abraham Lincoln, during the famous Lincoln-Douglas debates, said something which reflects the agreed human view towards being governed, “No man is good enough to govern another man without that other’s consent.”[8]

Whilst the word anarchism is understood by many in its defined form (provided by dictionaries and anarchists of history) often, the word appears to be inaccurate or misinterpreted. Anarchism, as a consequence of its imposing threat upon current authority, has been generally misused by power holders as “violence and chaos” throughout history. The general assumption that anarchism is chaos was disproved and clarified by Alexander Berkman when he wrote: “I must tell you, first of all, what Anarchism is not. It is not bombs, disorder, or chaos. It is not robbery and murder. It is not a war of each against all. It is not a return to barbarism or to the wild state of man. Anarchism is the very opposite of all that.”[9]

Finally, nation; A large aggregate of people united by common descent, history, culture, or language, inhabiting a particular country or territory as described in a common dictionary. A nation are those that live within a state, the citizens “integrated not by one but by a combination of several kinds of objective relationships (economic, political, linguistic, cultural, religious, geographical, historical), and their subjective reflection in collective consciousness.”(Miroslav Hroch, 1996)[10] In 1882, Ernest Renan concluded that a nation is “a group of people who had decided to live together. A group of people who have done great things in the past.” This is still a favoured definition to this day.

Ernst Renan also noted the fact that nations are something fairly new “Antiquity was unfamiliar with them; Egypt, China and ancient Chaldea were in no way nations. They were flocks led by a Son of the Sun or by a Son of Heaven.” Renan also acknowledged that classical antiquity had republics, municipal kingdoms, confederations of local republics and empires yet there was no mention of the existence or understanding of the concept of a nation. [11] This could mean that the concept of a nation came to exist with more civil societies, using the term as a solution for destructive activity within what existed before nations.

Universality, essentially meaning to exist everywhere, can be attached to the existence of the human race within nations, as declared by Ingmar Karlsson “The idea of universality derived from the French revolution. The Blut und Boden (blood and soil) concept and the idea that some races were historically bound to certain definite areas, contrasted with this. The nation is thus seen as a birthmark.”[12]

To conclude, this essay has touched more than just simple definition but also looked into the origins of very important words that tell the story of how our civilization is in fact civil to an extent. As noted, the four words within this essay have multiple meanings and definitions, either adjusted through time or taught and explained differently due to view points and misinterpretations, which is why it is important for each word to tell a story, so people can have a larger understanding of them. 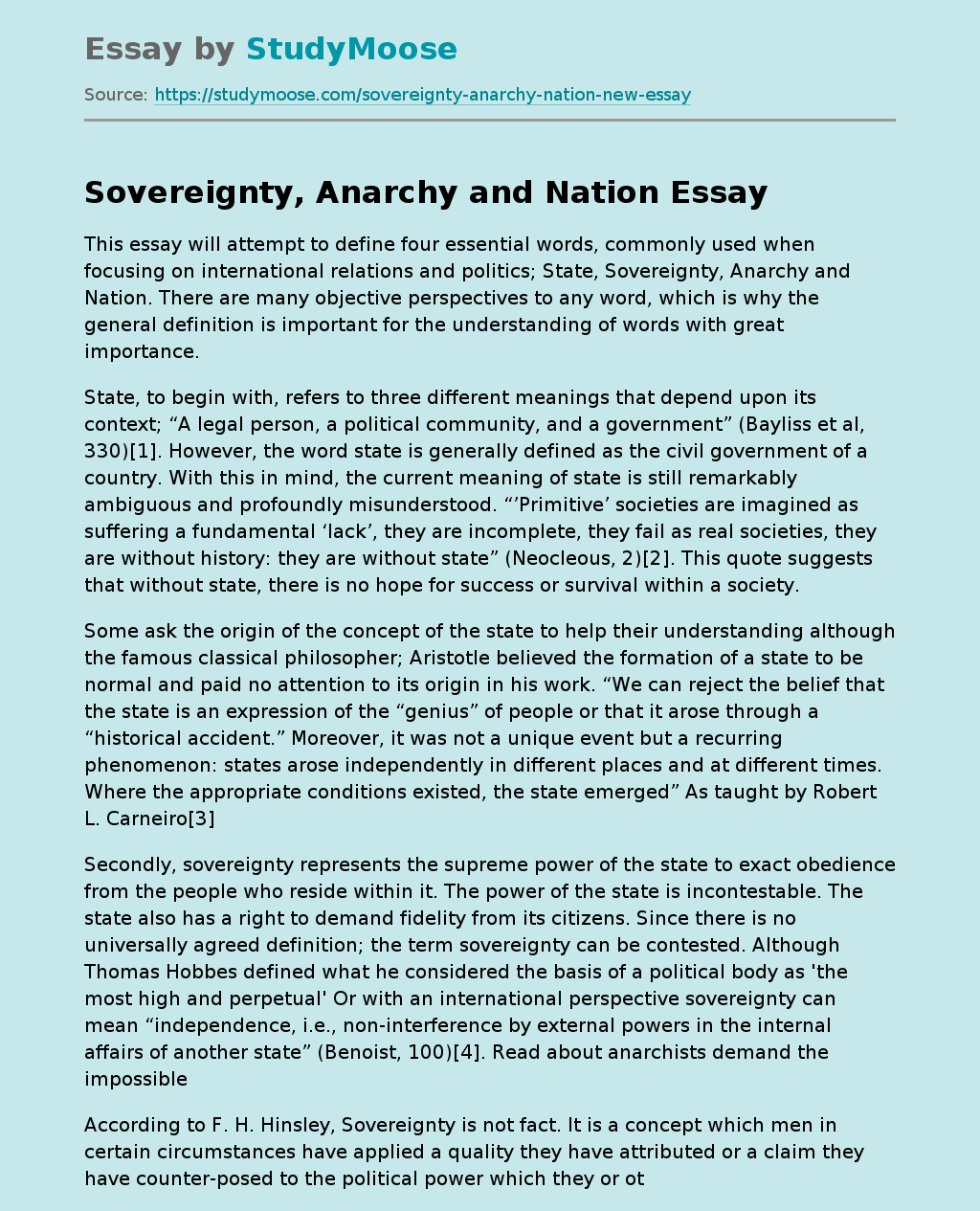